For our younger readers, particularly those born after the turn of the Millenium, the name Ronnie O’Brien may not mean much. Which makes the story of a man who played for Juventus after being released by Middlesbrough, and who almost won Time magazine’s Person of the Century award, even more worthwhile to tell. The story of how O’Brien almost appeared on the front cover of Time is one which saw him become one of the first footballing memes, amid a movement which would not look out of place on Twitter in 2022.

The prestigious American publication ran an online poll to determine their Person of the Century award. Luminaries from culture and politics, from Martin Luther King and Winston Churchill to Elvis Presley and Albert Einstein, were on the list.

However, Time also allowed an option for people to submit their own nominations – and amid one of the first major incidents of an online trend hijacking a public vote, O’Brien soon led the vote.

Time however shut down the fun, removing O’Brien and changing the rules. “Whimsical candidates who do not fall within the spirit of the title will not be counted,” was their sniffy response. Einstein won the vote instead.

For O’Brien, it was just one of several odd events in a career quite unlike any other professional footballer.

Born in Bray, Republic of Ireland, O’Brien impressed in youth football in his home country as an attacking midfielder, and was signed at the age of 18 by Championship promotion hopefuls Middlesbrough in 1997.

While O’Brien had success at youth international level – Ireland won the 1998 UEFA Under-16 Euros, a team containing John O’Shea beating Italy 2-1 in the final – he could not make the breakthrough for his club. 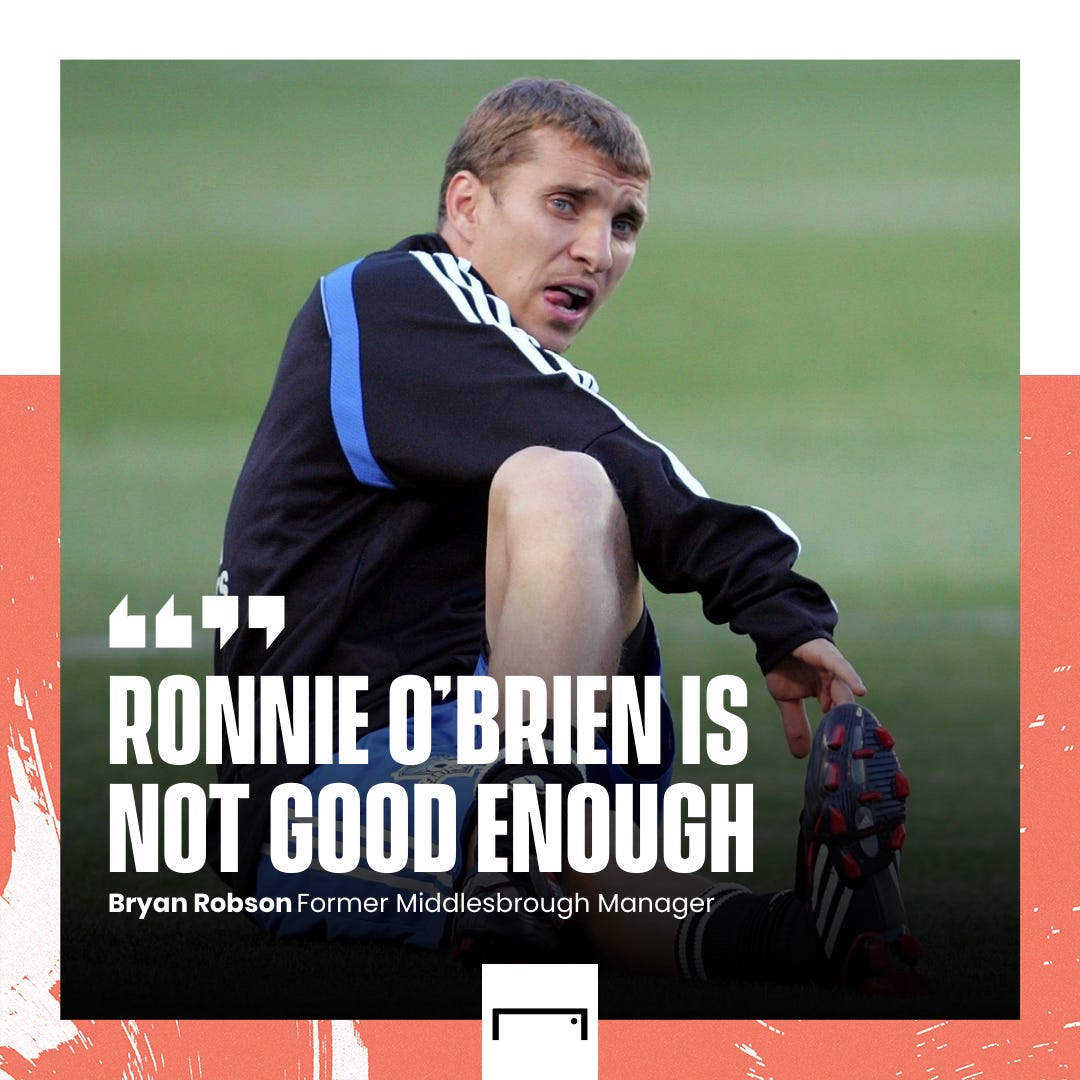 O’Brien was, thus, released in summer 1999, and may have been looking to find his feet in the English lower tiers and seek first team chances.

However, his agent Steve Kutner – who also represented O’Brien’s Boro team-mate Paul Merson – sent a videotape of his highlights to some of the biggest clubs in Europe, including Juventus.

The Old Lady were convinced, and so it was that O’Brien signed a five-year contract for the team managed by Carlo Ancelotti.

He became the third Irishman to sign for Juve, after 1910s midfielder Matts Kunding, and more lately the ex-Arsenal star Liam Brady.

The news of one of their fringe players being snapped up by Italian giants caused shockwaves on Teesside. A rather rattled Robson was not impressed by the notion O’Brien was one who got away.

“Ronnie O’Brien is not good enough,” said the Boro boss. “People jump to the ceiling because he has gone to Juventus, but he hasn’t done anything yet. Good luck to him. I hope he does really well and proves me wrong.”

Summer 1999 was a time of flux at Juve. Their squad did feature some all-time greats, including Zinedine Zidane, Edgar Davids and Alessandro Del Piero, however other first team stalwarts Didier Deschamps and Angelo Peruzzi had moved on.

With the Intertoto Cup to deal with in July and August, Ancelotti was prepared to experiment with his first team squad.

After appearing in three friendlies, O’Brien was named on the bench for clashes with Romanian side Ceahlaul Piatra Neamt, before getting his big chance against Russian club FC Rostselmash – now known as FC Rostov – in the second leg of their semi-final clash.

O’Brien was introduced for the final 13 minutes when Juve were already 9-1 up on aggregate, but the grainy footage from the game shows him applying himself well: motoring up and down the right wing, winning a free kick on the edge of the Rostselmash box before putting in a key block tackle in the Juve area to end a Russian attack.

He perhaps should have got on the scoresheet, but skewed two shots well wide, while his best chance saw Pippo Inzaghi flick a lofted pass over the defence, only for the young Irishman to give way to the onrushing Del Piero.

It was O’Brien’s shot to hit – he was in a much better position and had only the keeper to beat from six yards – however, Del Piero hit the shot, and with his body off-balance, screwed it past the far post.

This would prove to be the only senior action O’Brien saw for Juve. He was sent on a series of loans from September 1999 over the course of three years, with Swiss club Lugano, into the Italian lower leagues at Crotone and Lecco, and back to Britain with Dundee United in the Scottish Premiership.

Even as he became an early internet sensation, O’Brien failed to light up any of his temporary clubs, and in summer 2002 – three years into that five-year deal – he was released by Juventus.

However, the story does not end here. O’Brien’s fascinating career next took him to MLS, as he signed for Dallas Burn – now known as FC Dallas – in 2002, and really found his feet. He scored on his debut in a 2-1 cup win over San Jose.

His 2003 season was ruined by a broken leg, however next year O’Brien really shone, making 29 appearances, providing 10 assists along with two goals, and helping Dallas reach the MLS Play-Offs. He was named in the league’s 2004 team of the season and was picked for the prestigious All-Stars Game.

2005 was even better, with six goals and 12 assists across 30 matches, another Top 11 and All-Star Game selection, and Dallas second in the Western Conference and fifth in the play-offs.

Things went downhill afterwards, though. O’Brien fell out with Dallas coach Colin Clarke, and a move to Toronto FC was blighted by a knee injury.

The 2008 MLS season saw him sign for San Jose Earthquakes, however after 28 appearances that campaign, O’Brien made the surprise decision to retire from playing, aged only 29.

Since hanging up his boots, O’Brien has settled back in Dallas, playing golf and even coaching at his old club’s academy for a brief time.

A successful life and career – one far beyond that of a mere meme, or one of the strangest signings of all time.