The Portuguese cut a frustrated figure in Wednesday night's Coppa Italia loss to Napoli, which only piled further pressure on the Bianconeri boss

Cristiano Ronaldo was on the winning side in 11 consecutive finals for club and country between August 2014 and June 2019. He has now lost two in a row – for the first time in his professional career.

The Coppa Italia may not have been a priority for Ronaldo, but defeat hurt.

He was visibly frustrated by the fact that he did not even get to take a penalty in Wednesday night's shootout defeat to Napoli at the Stadio Olimpico, with misses from Paulo Dybala and Danilo having already put paid to Juve's hopes of victory.

There was no guarantee, of course, that Ronaldo would have scored. He missed a spot-kick in last week's semi-final against AC Milan and he had not performed well in that game in Turin either.

However, he was atrocious in Rome, the worst player on the pitch, according to the Gazzetta dello Sport.

Former Juve forward Luca Toni certainly was not impressed. "At the moment," he mused on Rai Sport, "Ronaldo struggles to even beat his man."

This defeat was not really about Ronaldo, though. Not primarily, anyway. 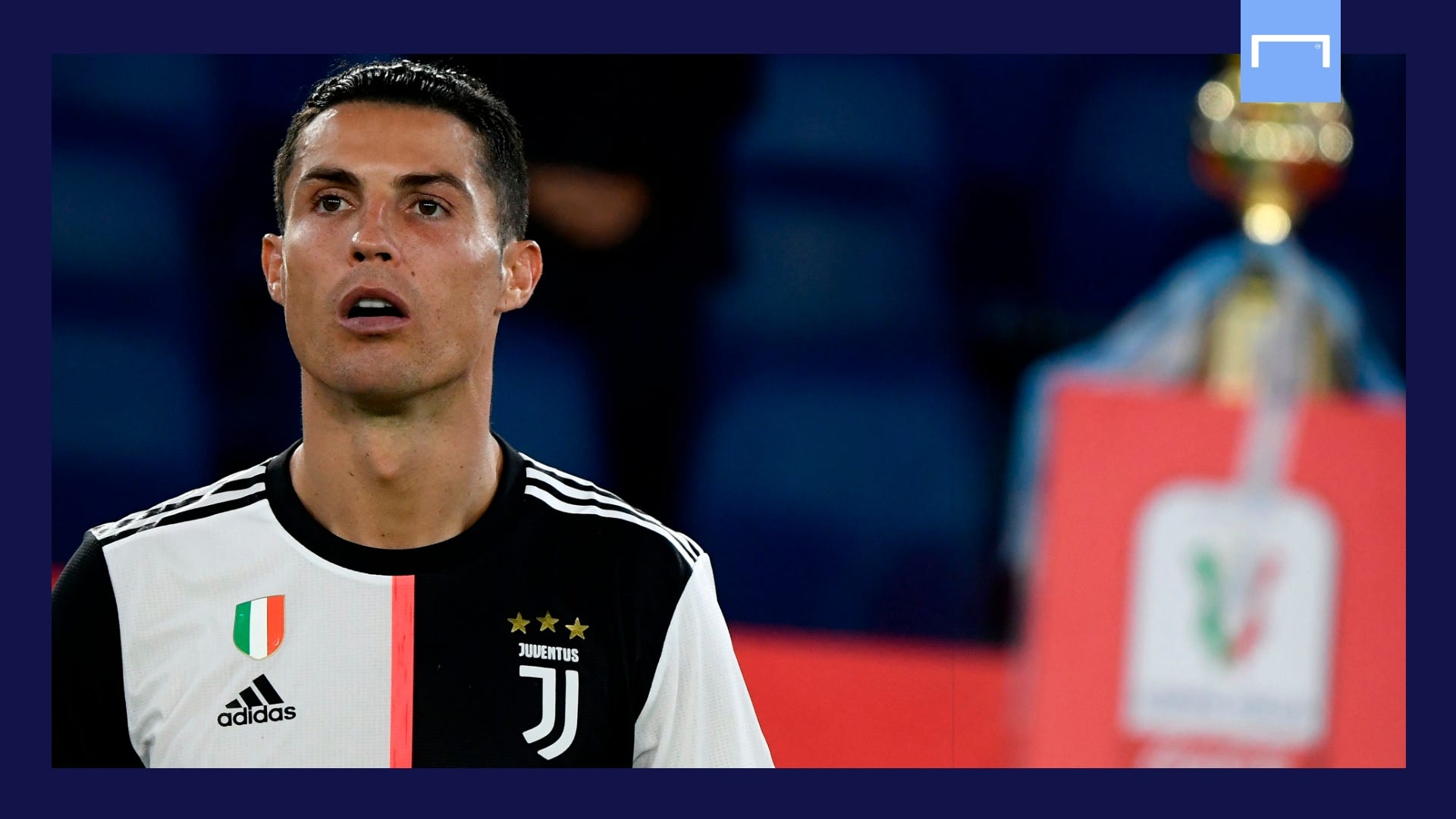 The finger of blame is being pointed firmly at Maurizio Sarri.

The Juventus coach cut an agitated figure even before the final, upset that the media was making a lot out of the fact that he had never won a major Italian trophy.

“I didn’t say much to the players after the game," he admitted to RAI. "I was angry and disappointed just like them, so at these moments it’s best to stay silent."

By complete contrast, Napoli coach Gennaro Gattuso could not wait to thank his players for giving him the first trophy of his coaching career.

Indeed, the one good thing about the game being played behind closed doors was that television viewers were able to listen in on the former Italy midfielder's rousing post-match speech.

"I saw heart and I saw character," he told his troops. "There are people here whose contracts are expiring and they're going to leave. But I see them crying. I'm so proud of you."

While Gattuso was hailing his players' passion, though, Sarri was lamenting his side's lack of "sharpness".

Such sluggishness could, of course, be attributed to the three-month suspension of play caused by the coronavirus outbreak.

However, it is not as if Juve were playing well before the break. Indeed, they have won just four of their last 10 games in all competitions.

Sarri was hired by Juve to not only win trophies, but do so in style. Right now, they are doing neither.

Juve's Juan Cuadrado claimed after the final that "Napoli defended with 11 men behind the ball" and the Partenopei certainly sat deep, just as they had against Inter in the semis.

However, it would be outrageous to suggest that Gattuso's side had done nothing but defend – or that they didn't deserve to win the game.

Juventus were not unlucky to lose on penalties; they were lucky to have made it that far. Had it not been for veteran goalkeeper Gianluigi Buffon, the Bianconeri would have lost in normal time.

The 42-year-old made a string of sensational and crucial saves during the 90 minutes and was one of the few Juve players to have performed well, along with defenders Matthijs de Ligt and Alex Sandro.

For the most part, Juve were dire, certainly from an offensive perspective, with the midfield once again proving utterly devoid of creativity. 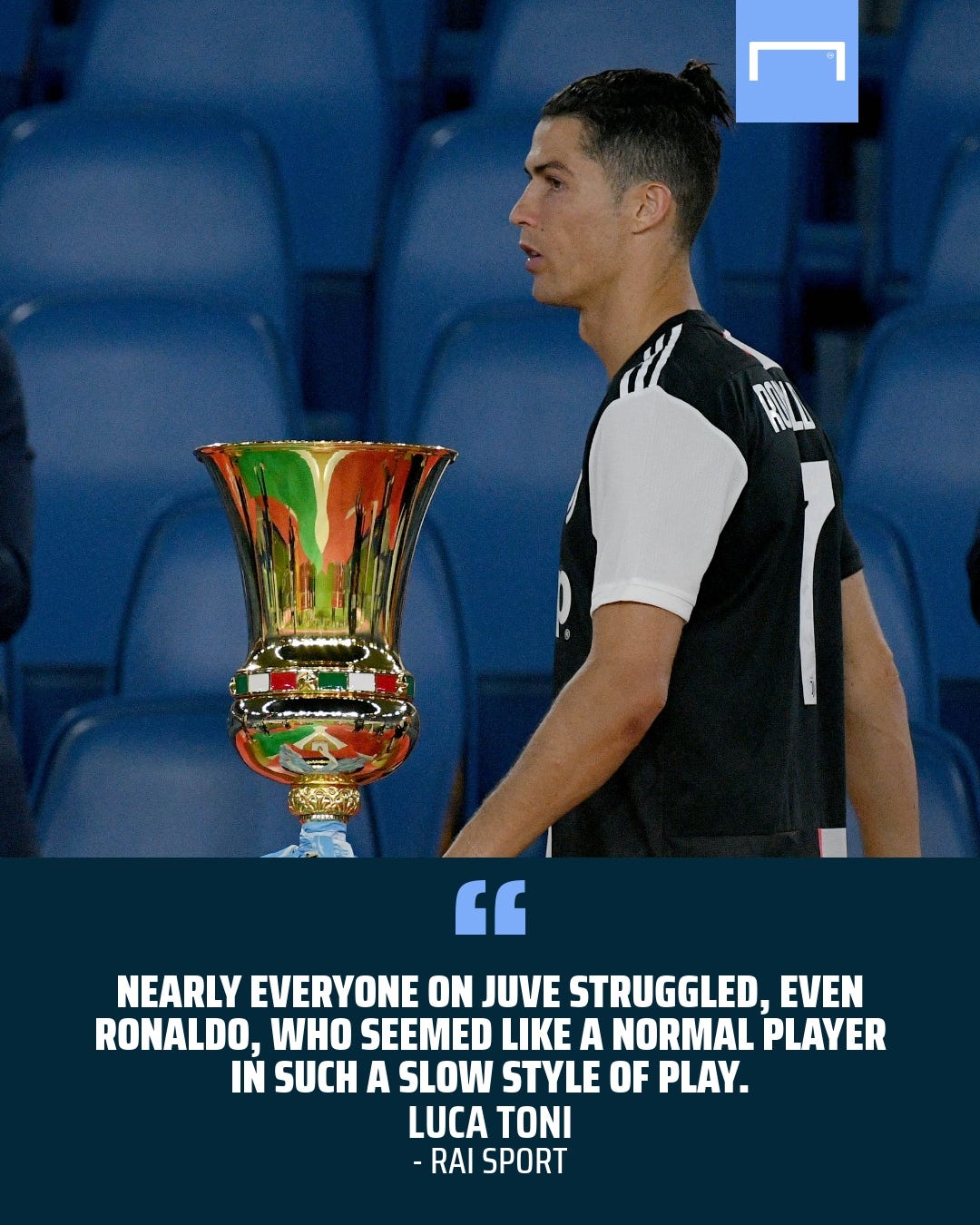 It was Napoli who carried the great attacking threat throughout. They had seven shots on goal alone; Juve managed just three.

Gattuso's side may not be easy on the eye, but neither are Juve, who are not even as effective as Napoli, as Wednesday's game so painfully proved.

There was only one team on the pitch with a clear idenity; one team that carried out their coach's instructions to perfections. And it was not the side bidding for a ninth consecutive Scudetto.

Ahead of this weekend's resumption of play in Serie A, Juve sit top of the table, one point ahead of Lazio, who beat the Bianconeri in this season's Supercoppa Italiana and still have to travel to Turin in the league.

The Old Lady remain favourites in the title race because of their superior strength in depth, but this performance will have only instilled the Biancocelesti with more confidence.

As Toni said, "Buffon was the best player on the pitch but I saw nearly everyone else on Juve struggling, even Ronaldo, who seemed like a normal player in such a slow style of play."

Buffon told DAZN before the final that Sarri's "real Juventus" will only emerge next season, but will he be given that long? Patience is already wearing thin.

"Napoli triumph, Sarri disaster" was the headline in the Turin-based daily Tuttosport on Thursday morning.

Neither the Supercoppa nor the Coppa Italia were major objectives for Sarri, of course, but he cannot keep losing finals. Juve will not tolerate it.

And nor will Ronaldo.