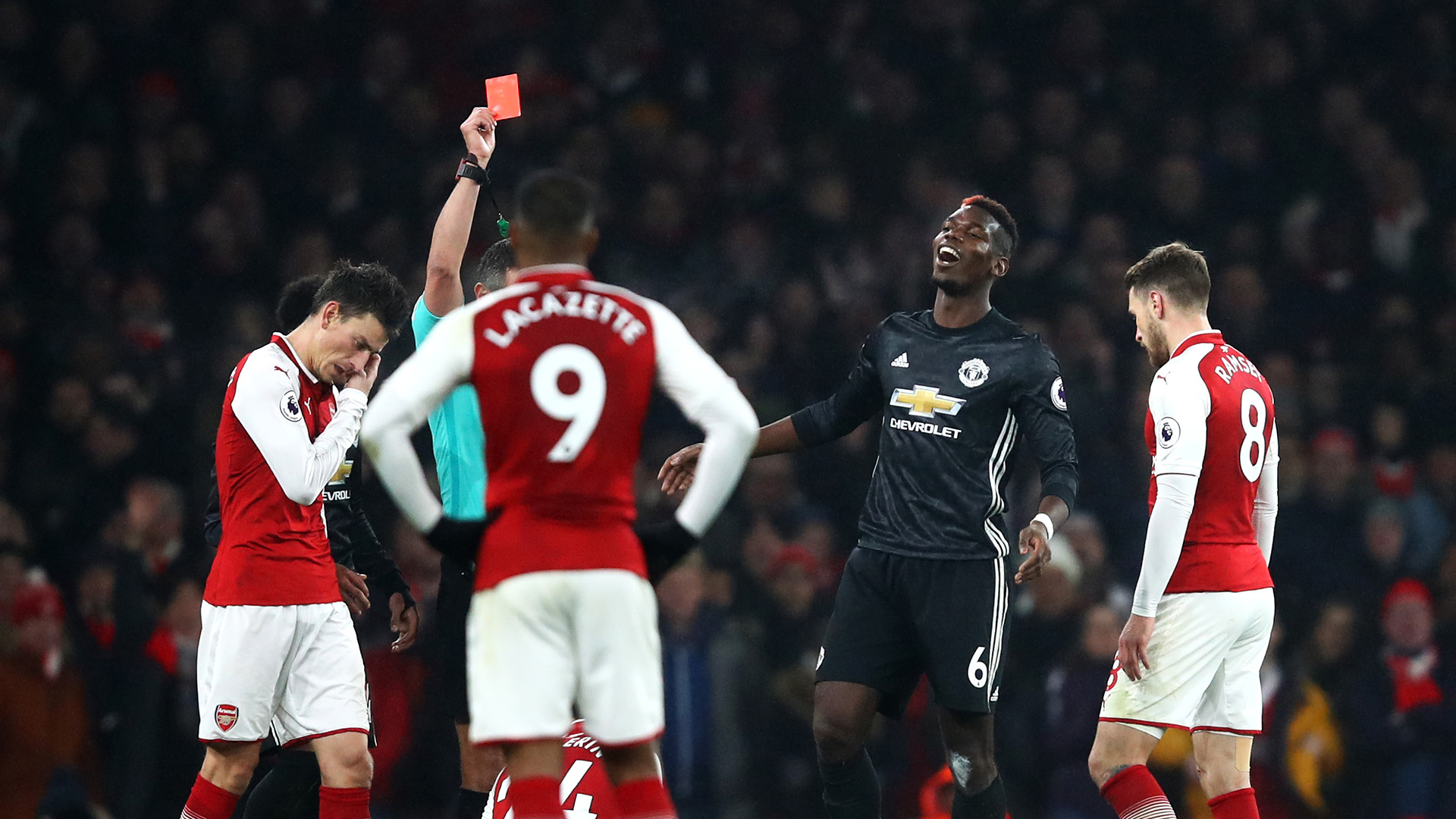 Paul Pogba will miss Manchester United's crucial Premier League game against Manchester City after the club decided not to appeal his suspension.

After setting up two goals for his side, the 24-year-old was sent off in the 3-1 win over Arsenal for a stamp on Hector Bellerin in the second half.

Jose Mourinho's side are looking to narrow the eight-point gap between them and the unbeaten leaders when they meet at Old Trafford on Sunday.

But reports in the UK state they have accepted they will be without the star midfielder, who has three goals and five assists in eight league appearances this term.

As a result, Pogba will miss the clash against Pep Guardiola's team, as well as games against Bournemouth and West Brom.

However, he will still play in Tuesday's Champions League game against CSKA Moscow, Mourinho confirmed.

"He's very happy to play tomorrow. It's the next match, the match that matters. He plays tomorrow," the Portuguese said.

"Of course he's maybe a bit tired and has only had a few days to recover, but he's very happy and he'll try to keep his momentum, because since he's been back he's been phenomenal."

United sit top of Group A with 12 points and will seal first place with a draw against the Russian side on Tuesday.

Mourinho's opposite number Pep Guardiola had been keen for Pogba to be available for the derby at the weekend.

"I would like it if Paul could play against us because I like to face the teams with the best players possible to see if we are able to beat them," said Guardiola after City beat West Ham 2-1 on Sunday.

Meanwhile, former United captain Gary Neville has outlined how he thinks Mourinho may set his team up against City in the absence of Pogba.

"I was excited by what I was watching in the first 20 minutes against Arsenal, the counter-attacking was fantastic," he told Sky Sports.

"[Jesse] Lingard, [Anthony] Martial and [Romelu] Lukaku were brilliant, and you could see a little bit how [Nicolas] Otamendi or [Vincent] Kompany could get caught. You could see how that tactic could work in the Manchester derby.

"Pogba makes a big, big difference. So, when they went to Anfield, they couldn't connect the deep defence to the midfield and into attack. He connects that, he links it, with those runs forward and his composure on the ball.

"It [Pogba's red card at Arsenal] was a cloud over a very good day for United because he is such an important player in the connection between the front and the back.

"The composure he shows travelling with the ball, you see West Ham when they were deep with 20 minutes to go, they didn't have anybody that could travel with the ball, past [Kevin] De Bruyne and [David] Silva.

"City is a big game to not have Pogba. The person who can break the line is gone, but Jose Mourinho will be looking at how he can do it differently.

"I was trying to think myself what Jose will be thinking. Do you play split strikers with Martial and Lukaku? City bring their full-backs in narrow while two centre-backs push up the pitch, [so United could] just leave two strikers stretched wide and you play three central midfielders and five at the back, and say to City that's what we'll do, trust that the front two will get into those areas."