As the Lionel Messi era begins to come towards its end, Argentina is on the hunt for a new footballing hero to pin their hopes on.

One potential candidate is Lanus winger Pedro De la Vega, who, at just 18, is already becoming a household name in his homeland while collecting admiring glances from some of Europe's biggest clubs.

Manchester City were the latest to be linked with the teenager during the January transfer window, with the Premier League champions reportedly willing to spend €12 million (£10m/$13m) to bring him to the Etihad Stadium.

Born in Olavarria, a city situated in the south of the Buenos Aires province, De la Vega's first steps as a footballer came at local team Ferrocaril Sud before he travelled to the capital in 2012.

At just 11, he had trials with both Boca Juniors and River Plate, but neither of the Argentine giants were willing to offer him a place in their academy. Instead, he landed at Lanus, a club who play regularly in Argentina's top tier but have neither the history nor the fanbase of their neighbours.

At the 'Granate', De la Vega began to flourish and, in 2017, he was named the Outstanding Youth Soccer Player by the Argentine Football Association.

Nicknamed 'Zorro' due to the fictional character's real name of Diego de la Vega, he struck up a relationship with senior forward duo Jose Sand and Lautaro Acosta in a bid to learn from them. Little did he know that he would be playing alongside them in the not too distant future.

While still only 17, he received a surprise first call-up to Luis Zubeldia's senior squad, having previously played in Argentina's sixth division with Lanus' youth team.

Two days later, on September 16, 2018, he was named in the starting line-up to face Racing Club for his Superliga debut, playing 58 minutes before being replaced in a 1-0 defeat. 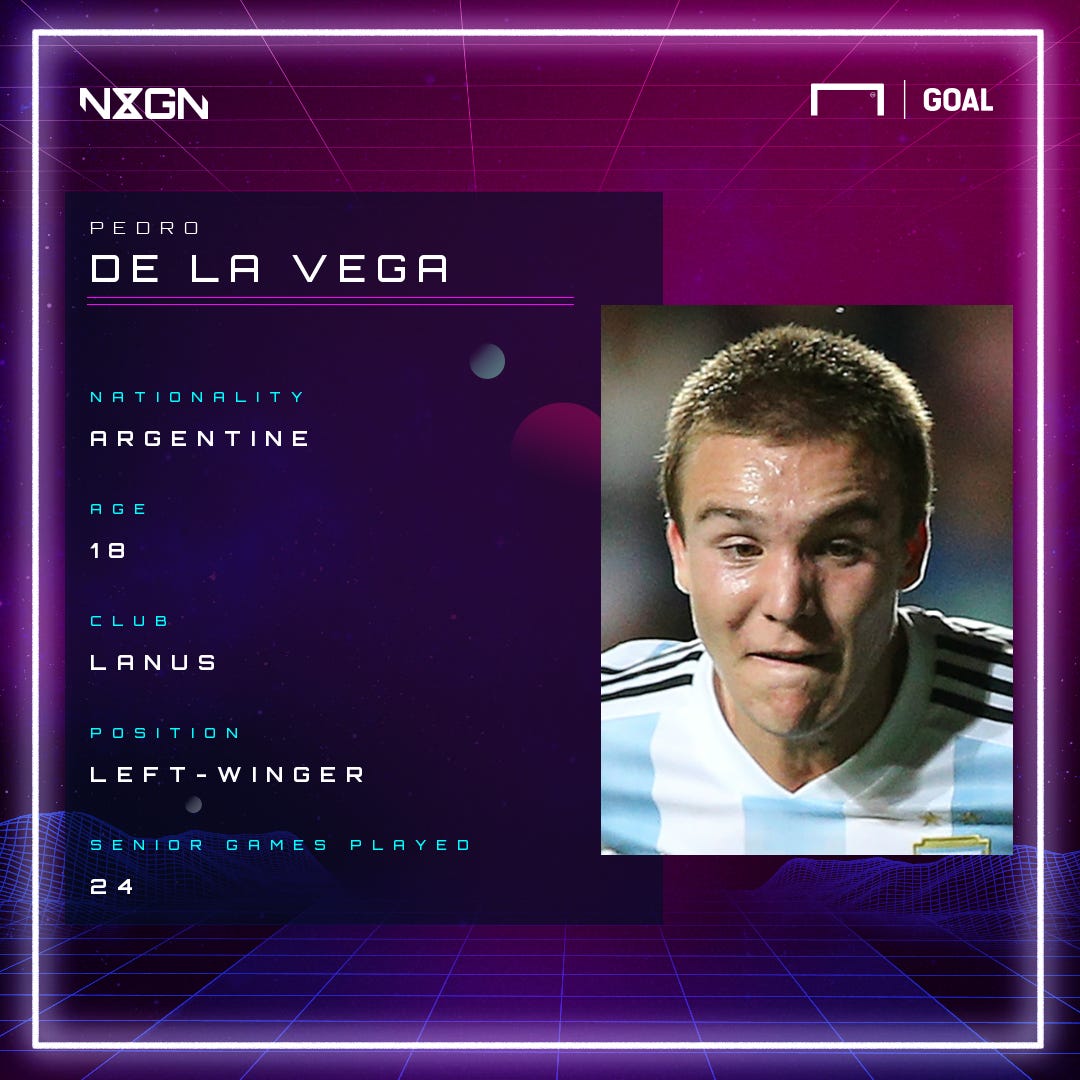 Upon his return to school that week, De la Vega was cheered into the classroom by his friends in a video which went viral in Argentina.

It was unusual for De la Vega not to be around team-mates when studying, given Lanus offer to educate their young players on site. De la Vega, however, took a different route.

"In Lanus, they send you to a school that is next door. But my dad didn't like it because they were all the kids in the club and you become lazy," the youngster told Clarin.

"Education grounds you. It is not so demanding. And my old man wanted me to study, so he looked for a public school for me with a good educational level. It is six blocks from where I am staying."

De la Vega senior's decision has been justified, with his son chosen as the class' flag bearer upon their graduation.

The teenager also admits to having a lot of progressive views, crediting his sister for teaching him the importance of the women's movement from an early age.

Just two weeks on from the joyous scenes in his classroom, images of De la Vega were again being seen and discussed on every Argentine sports programme, though this time there was a far less celebratory tone to the coverage.

Named as a starter for just the second time against River Plate, De la Vega was substituted after 72 minutes of a match that Lanus would go onto lose 5-1 at home to the eventual continental champions.

The youngster was shown fighting, and failing, to hold back tears as he endured the closing stages of a demoralising defeat on the bench; a mere child unable to do anything to stop a force greater than the one he and his team-mates possessed.

Despite that jarring setback, he remained in Zubeldia's line-up for three further games before being used predominantly as a substitute for the remainder of the 2018-19 campaign.

He also missed a chunk of the season after receiving a first call-up to the Argentina Under-20s for their South American championship in January before going onto represent the Albiceleste at the U20 World Cup in May.

De la Vega's second season at senior level has been defined by a number of substitute appearances, with the winger – who does not turn 19 until February – starting just one league match for Zubeldia thus far.

He did, however, register his first senior goal with an 87th-minute winner against Huracan in November before doubling his tally with an 81st-minute equaliser against Arsenal a month later.

For much of his senior career, De la Vega has been utilised as a winger, predominantly playing from the left. That has brought about some confusion regarding his favoured role, given he came through the youth ranks as a right-back and has even been known to be deployed in midfield.

Playing out wide does seem to favour him, however, with his footwork and ability to both play a killer pass and provide the finishing touches to moves having led to him being compared to Angel Di Maria in some quarters, albeit a right-footed version of the Paris Saint-Germain star with slightly more skill than agility.

Both Inter and Genoa tried to take him to Serie A during the summer of 2019, with the latter coming very close to completing a deal, while City's interest in January has been matched by Sporting CP, according to reports in Portugal.

And while De la Vega's aim for 2020 needs to be locking down a regular starting role at Lanus, there is no doubt that Europe beckons for one of Argentina's most talented teenagers.