Brazilian football is doing something right when it comes to producing flying wingers.

Both Vinicius Junior and Rodrygo have slotted seamlessly into the Real Madrid first-team squad, but the best of the current crop could be about to emerge into the foreground.

“I looked for more information about him and I was impressed once I saw him wearing the No.7 producing beautiful plays.

“I watched him score a goal dribbling from almost his own half before finding the net with a quality finish, calmly beating the opposition goalkeeper."

Bebeto's eulogising came during Brazil's Under-17 World Cup-winning campaign towards the end of 2019, as the Selecao youngsters secured the trophy on home soil.

Veron found the net on three occasions as well as providing two assists, with the hosts beating Mexico 2-1 in the final at Estadio Bezerrao.

He also led the way in terms of chances created from open play (18) and dribbles completed (22) during the tournament, with his performances ensuring he was the clear winner of the Golden Ball for the competition's outstanding player. 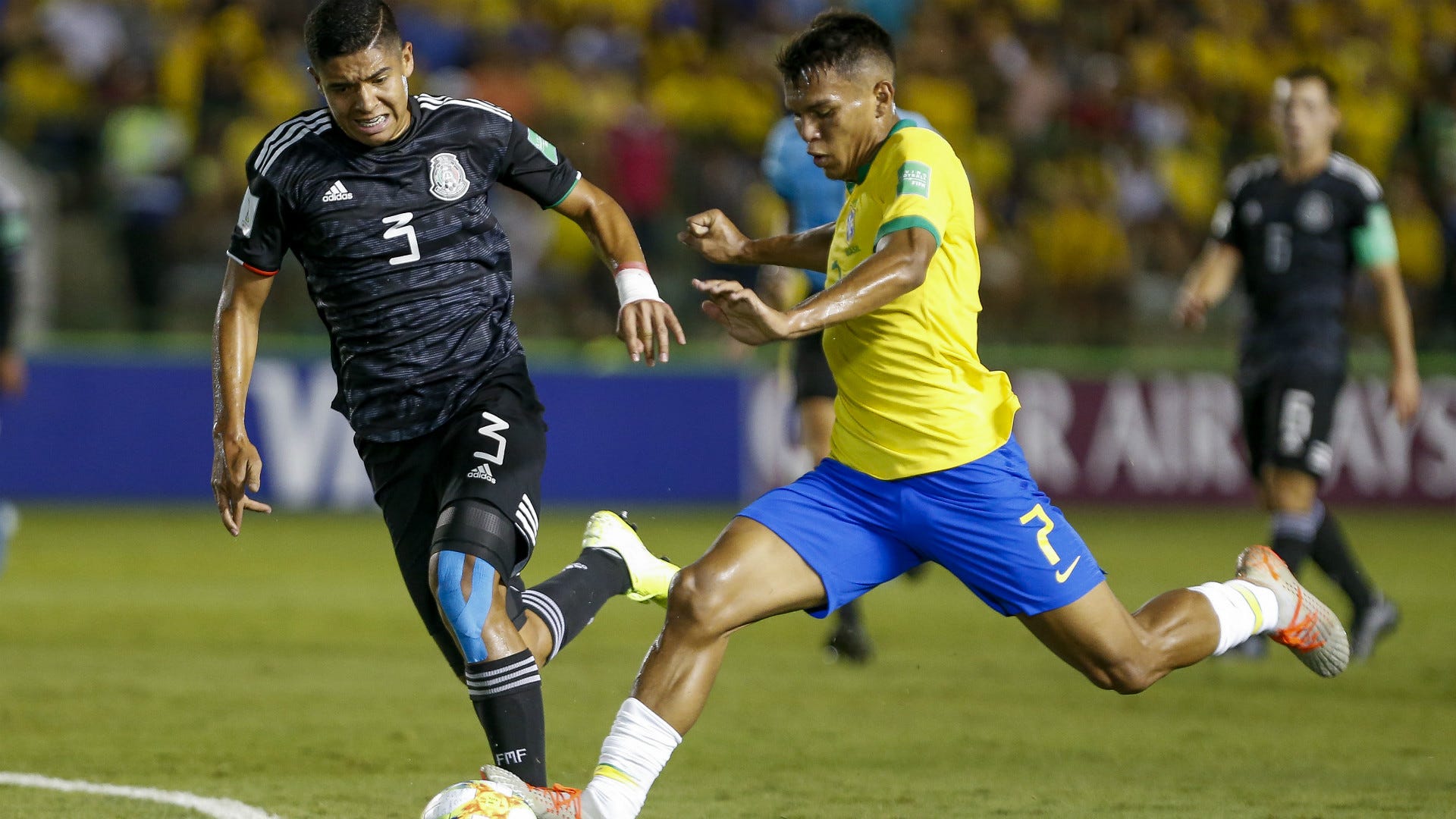 And while Veron is being touted as a future star of Brazilian football, his name will certainly be familiar to supporters of their great rivals, Argentina.

He was, after all, named after Albiceleste great Juan Sebastian Veron, though it was not his parents' original choice.

"It was our neighbour's idea," Veron told FIFA.com in November. "He’d always wanted a son but ended up with three daughters. So, when my parents couldn’t decide on a second name for me, our neighbour said: 'Why not call him Veron?'"

Veron's mother, Gracielly Silva, had no idea of the footballing connotations related to her son's name, while the man himself admits that he was too young to watch La Brujita (The Little Witch) in action, though he has since seen highlights clips on YouTube.

“I’m certain you’ll achieve much more in your future”, said the original Veron on a video that was sent to Gabriel and shared on Palmeiras' social media accounts in 2019.

“He’s an idol for me. I promise I’ll keep honouring our name on the pitch,” was Gabriel's reply.

However, Veron's life could have been very different if his father, Carlos Alexandre, had got his way during the boy's upbringing.

A ranch hand in Veron's home town of Assu in the north east of Brazil, Carlos Alexandre would take his son on horse rides into the countryside despite, at times, searing temperatures in the hope that he could be persuaded to become a cowboy.

His mother, though, never backed down in supporting Veron's dream of becoming an athlete. 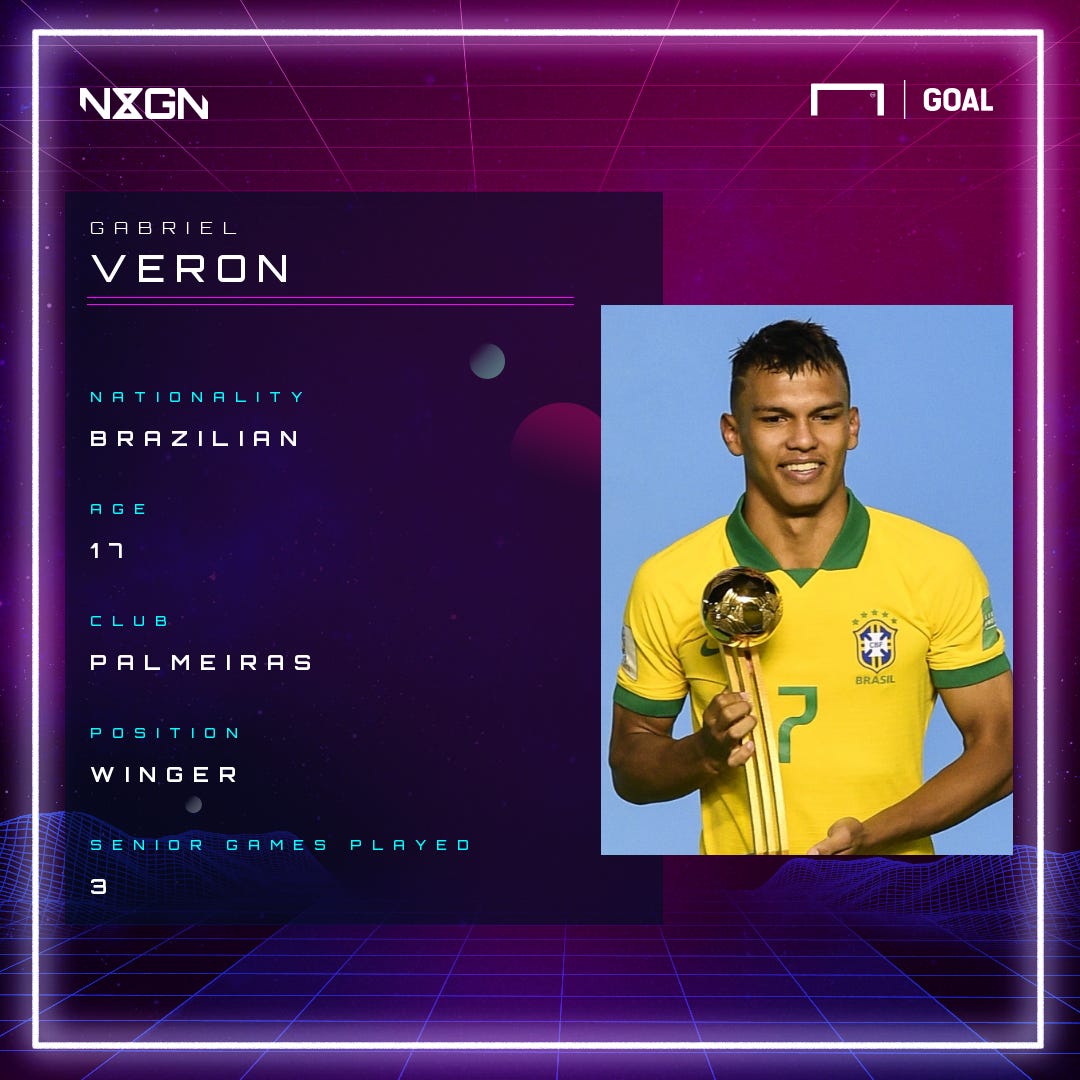 His first serious steps into the footballing world came as an academy player for Santa Cruz, a club from his home state where he impressed enough to earn an invitation to join Palmeiras' U15 squad.

He never looked back once he accepted the chance to wear the famous Verdao shirt. Indeed, at just 15, he was one of the top performers as Palmeiras won the Scopigno Cup – an unofficial world championship for U17 sides – by beating Real Madrid in the final.

At that stage, it was clear that not even a club that has become renowned for favouring big-name signings over homegrown talent in recent years could let these performances go unrewarded.

Veron was promoted to the senior squad at the end of the 2019 season and showed no fear as he became the first Palmeiras player born in the 21st century to feature in a Brasileirao match when making his debut off the bench against Fluminense in November.

A week later, he again appeared as a substitute, this time against Goias, and despite being given just 32 minutes of game time, he managed to contribute two goals and an assist to help secure a 5-1 victory.

“He’s a boy with loads of quality, so it’s up to us to slowly give him space to play in the first team,” Andrey Lopes, Palmeiras’ caretaker manager for the end of last season, said. “I’m sure he’ll provide much joy to our fans.”

Palmeiras supporters have not seen such a talent come through their ranks since Gabriel Jesus, who left for Manchester City in 2017, and there is an expectation that Veron will eventually follow his compatriot to Europe.

For now, though, he enters 2020 with hopes to become a key member of the Palmeiras squad while taking the next step through Brazil's age-group sides.

With such talent at his disposal, it is almost a given that he will continue to thrive.