Another England win, another tactical masterclass from Gareth Southgate.

Until Euro 2020 Southgate was not considered much of a tactician, his rigid formations and late substitutions provoking disappointment form English supporters used to the hyper-fluidity of the club game.

But a sharp eye for detail, reactive tweaks, and impeccable timing have clearly been developed in the job, with the 2-1 victory over Denmark in the semi-final just the latest example of Southgate getting every big decision right.

His 4-2-3-1 helped to pin the opponent back for long periods; the Jack Grealish substitution capitalised on Denmark’s tiring legs and then the switch to a 3-4-3 to cope with Kasper Hjulmand’s move to a 4-2-4 saw the game out.

It has taken Southgate a long time to win over the doubters, to win the trust of those who wanted England to unleash their dazzling array of attacking talent, but there are surely no more disbelievers.

In Southgate we trust, and ahead of the Euro 2020 final against Italy – England’s biggest tactical test of the tournament – there is a belief he will get the big calls right. And there are some huge calls.

First, the formation, and Southgate is likely to stick with the 4-2-3-1; Italy’s strength in midfield necessitates a third central midfielder, making the 3-4-3 an unlikely choice.

Southgate will probably also pick the same starting XI, largely because Bukayo Saka’s defensive work gives England the best of both worlds. Saka can operate like a wing-back, and with Kyle Walker mostly staying deep to form a back three while England are in possession, Southgate’s formation swings effortlessly between 4-2-3-1 and 3-5-2.

Italy are also expected to stick with a 4-3-3 and the same line-up used in the penalty shootout win over Spain.

On that basis, here’s a look at where the final will be won and lost...

England’s focus on attacking down the wings

A theme of England’s play has developed through the knockout stage as Southgate’s team consistently attack down the flanks; just 23 per cent of their attacks are funnelled through the middle, the fifth-lowest at Euro 2020.

Kalvin Phillips and Declan Rice are not strong line-breaking passers, which means Mason Mount struggles to get on the ball as England arch their passes around to the flanks.

But it is also deliberate, given how often Raheem Serling and Bukayo Saka are dribbling straight past the opposition full-backs. 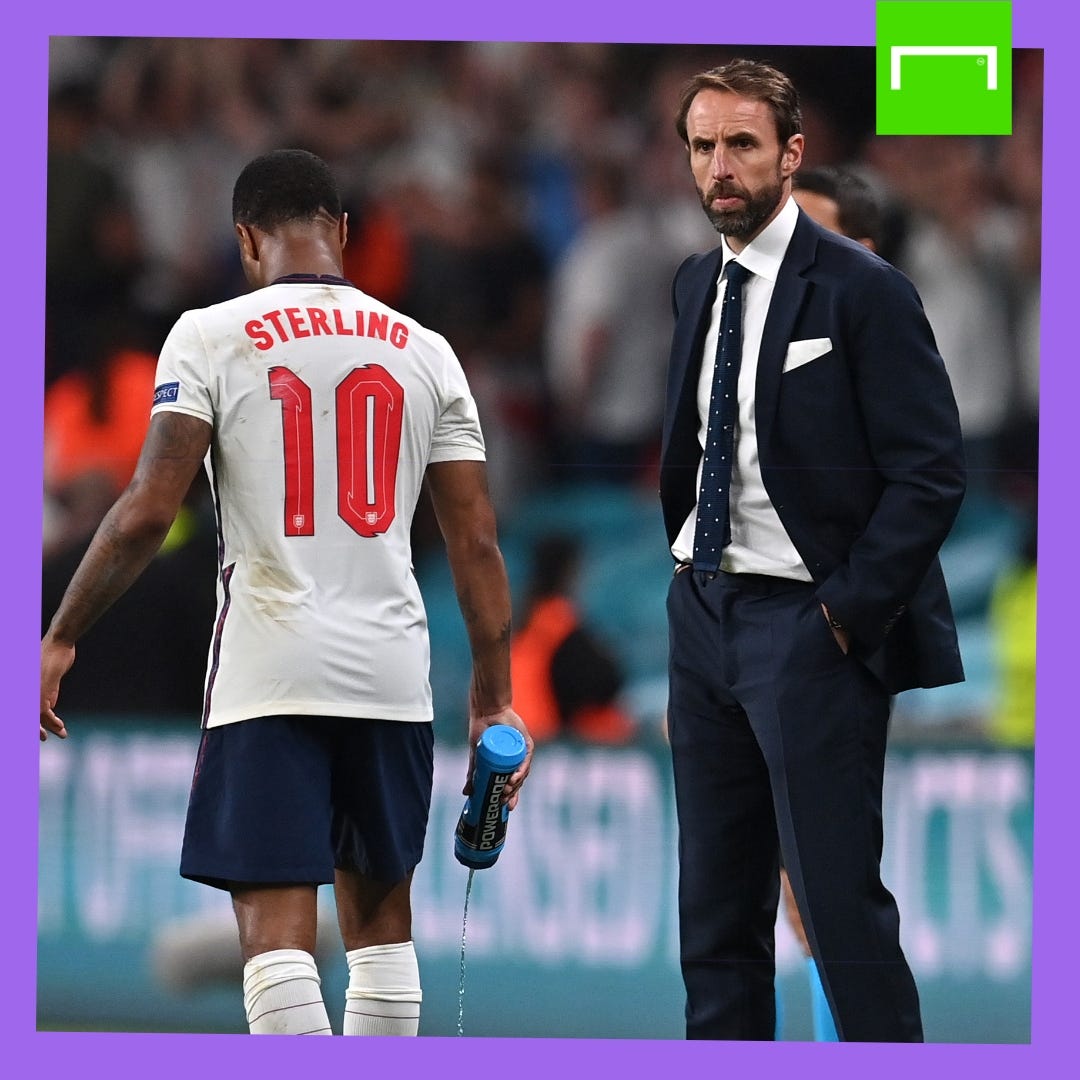 As a consequence England are developing an archetypal goal of driving to the byline and cutting the ball back, hence why all 10 of their goals have been scored within 12 yards of goal.

This is England’s most likely source of a goal against Italy, who sit in a 3-2-5 when in possession as right-back Giovanni Di Lorenzo becomes part of a back three and Emerson drives forward from left-back.

Emerson is considerably weaker in attack and defence than the injured Leonardo Spinazzola and this is where England can find joy. Behind the Chelsea man, Saka’s driving runs can cause havoc.

But Sterling, with Luke Shaw overlapping, remains England’s favourite form of attack and it could prove very productive in the transition considering Italy are likely to dominate possession for long periods.

What’s more, the now familiar swap of Saka for Grealish, with Sterling moving to the right, will put Emerson under even more pressure late on.

England’s biggest cause for concern is the elegant passing of Jorginho, Marco Verratti, and Nicolo Barella, who are far more comfortable with the ball than Rice or Phillips.

Southgate’s side will need to be prepared to sit in for long periods. Their most likely defensive plan is another repeat of the Denmark game.

England’s press was slightly unusual on Wednesday in that Sterling and Saka pressed the centre of the pitch, leaving Denmark to play an easy ball out from the back into their wing-backs.

England conceded this territory happily, confident in their ability to prevent the wing-backs from creating crossing situations and blocking the centre options to Mikkel Damsgaard and Martin Braithwaite.

On Sunday, this tactic should prevent Italy’s dominance of the centre ground from pulling England out of shape, and against Southgate’s conservative defensive line there won’t be many opportunities to get Ciro Immobile in over the top. 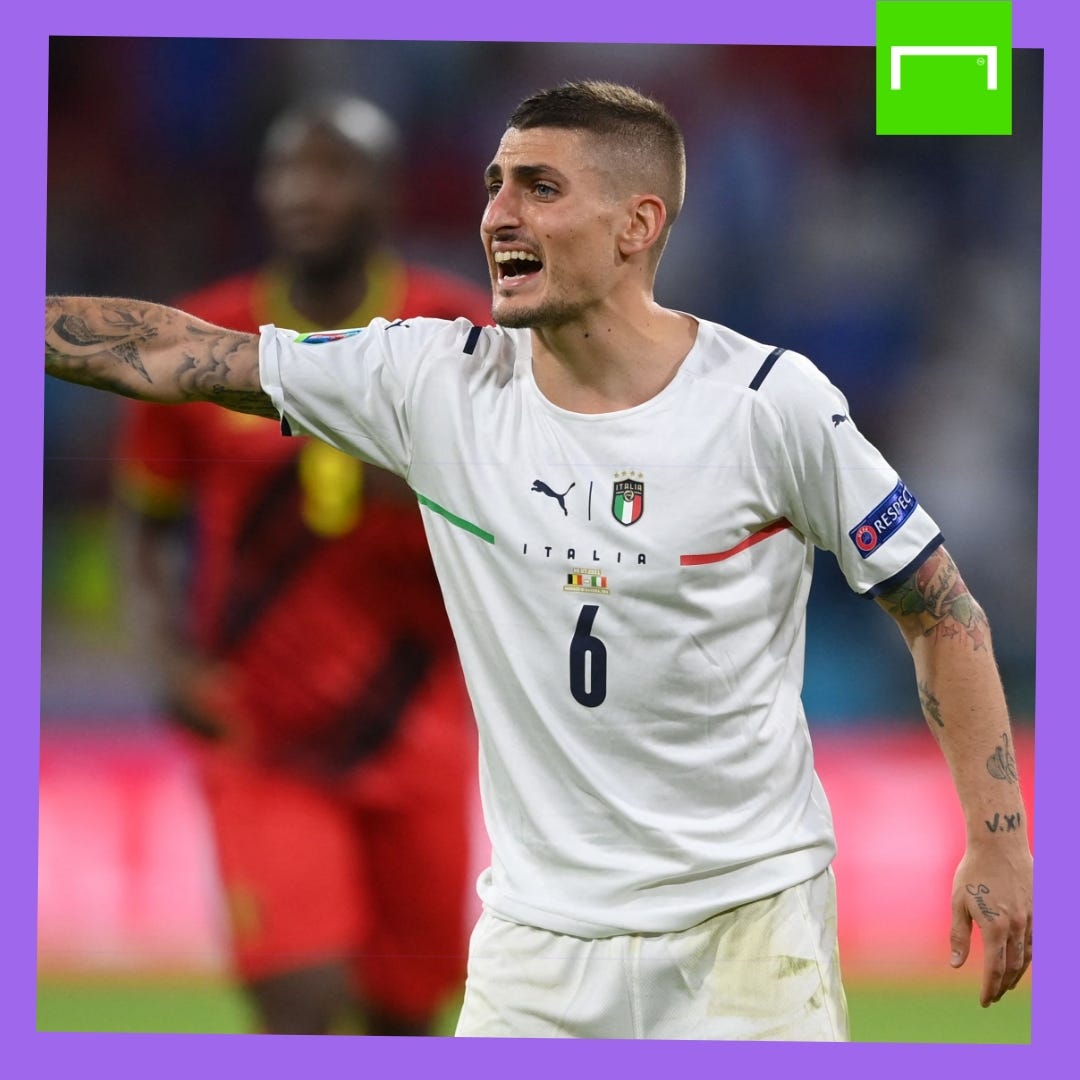 A lot, then, will rest on Emerson and Federico Chiesa battling one-on-one with the England full-backs.

Another area of concern for England is how to control Jorginho, given that Rice and Phillips will be preoccupied with the forward movement of Verratti and Barella.

Mount, operating as a No.10, must work hard to drop onto Jorginho and prevent him from getting too much time on the ball.

That will be the meat of the game, but Sunday’s final could just as easily be won or lost in the transitional moments and the resulting set-pieces.

Italy’s counters were not particularly good against Spain and yet after a period of England pressure, there is a possibility Chiesa can find joy behind Shaw, especially given that Harry Maguire is on that side. He can be caught out by quick, direct counters.

England and Italy both rank in the top three for goals from set-pieces, which account for 23% of their combined total, and whether from counterattacks or not, free-kicks and corners could settle a tight, nervy, and evenly-balanced game at Wembley.

Harry Kane and Maguire up against those colossal Italian centre-backs is worth keeping an eye on at both ends of the pitch. But as with every tactical preview throughout Euro 2020 the formation, line-up, and key battle discussion could become irrelevant as substitutions litter the field in the second half.

Interestingly, Roberto Mancini’s five changes against Spain seemed to disrupt Italy’s rhythm – they had just one shot in the remaining 35 minutes after the fifth sub – as it did Denmark in the other semi-final.

And that is where Southgate’s boldness in holding rigidly to his system – once considered a frozen, fearful trait – once again proves useful.

He makes fewer subs, maintaining England’s flow, and it may once again give his team the edge.