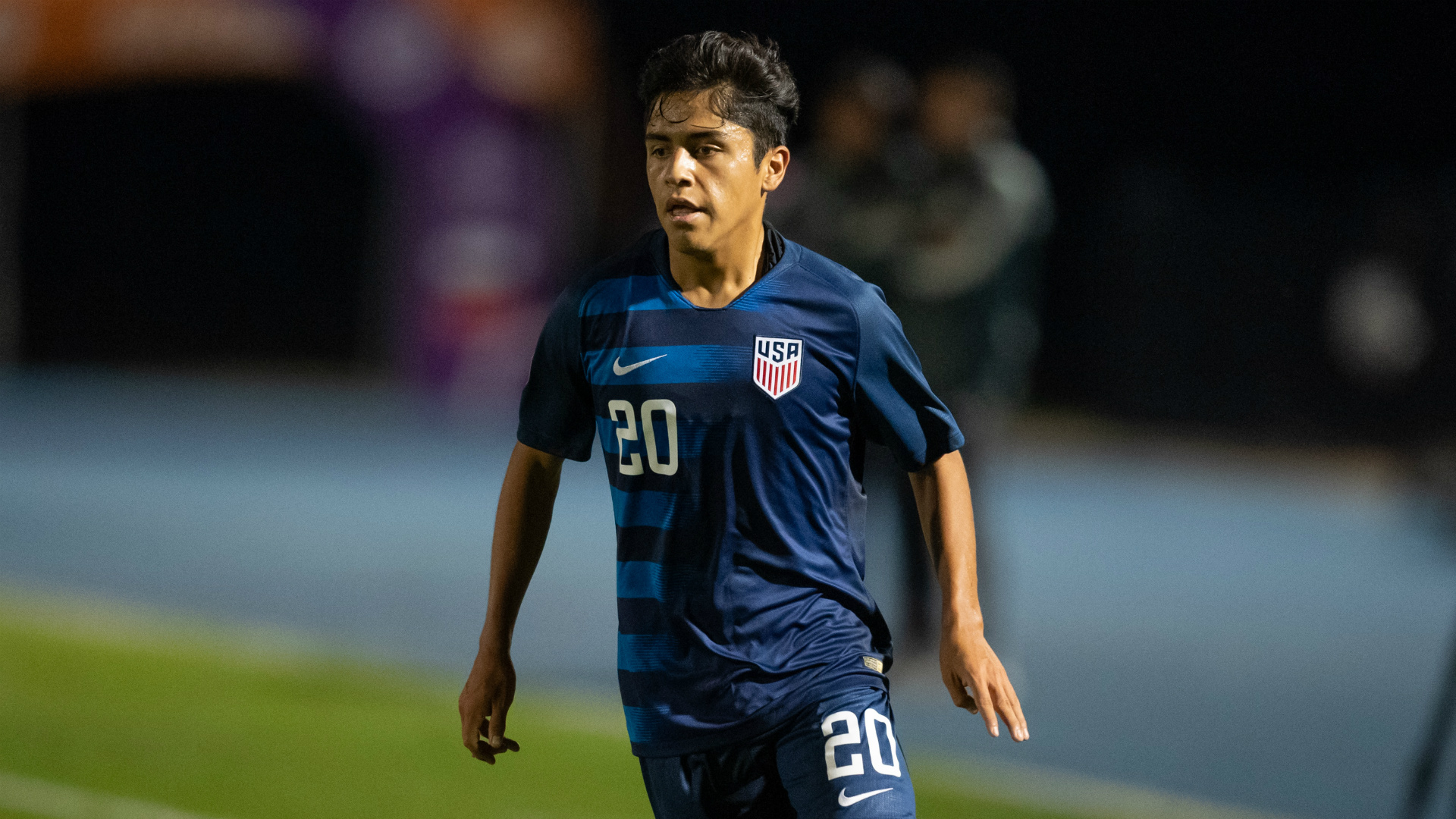 The 2019 MLS draft doesn't have a clear-cut best player, no can't-miss prospect teams can pencil as a day one starter like Cyle Larin or Andrew Farrell in years past. What this year's draft does have is potential, and several players who teams see being able to develop into productive starters with some time.

There are some prospects with higher upside, like the top talents in the Generation Adidas class, but this year's draft class does boast some depth at some areas of need for MLS teams – mainly central defense and fullback. Teams looking for some defensive reinforcements have more options to choose from this year than last, when New England's Brandon Bye was the only defender drafted who became a productive starter in year one.

MLS teams will also have to make decisions on international players, and whether to gamble on taking a player who will require using a valuable international roster spot. Atlanta United's successful gamble on Julian Gressel two years ago has served as the evidence of what can come to teams that take that chance, but even the Gressel success story isn't going to keep promising international players from having their draft stock hurt by their international status. That holds true for players like Denver striker Andre Shinyashiki and UCLA midfielder Anderson Asiedu, who would both be projected to go much higher in the draft if they counted as domestic players.

This year's draft boasts a strong contingent of Canadian prospects, and the recent rule change allowing some Canadians to count as domestic players is a major boost for those players, including Tajon Buchanan, Callum Montgomery and Dayne St. Clair, all of whom are projected to be top 10 picks.

Which 24 players will be taken in Friday's MLS Draft first round? Here is a look at the prospects we could see being chosen:

FC Cincinnati will be choosing between Amaya and Siad Haji, and ultimately go with Amaya. The U.S. Under-20 international is a skilled box-to-box midfielder who showed in the Concacaf Under-20 Championships that he is a special talent. He will need time to develop, but FC Cincinnati should be able to afford him time to mature, and also make a run at the U.S. Under-20 World Cup squad.

Matias Almeyda probably came away from the MLS combine a bit discouraged by what he saw overall, but he was very likely impressed with Haji's ability to keep the ball under pressure and deliver line-splitting passes. The Earthquakes would likely prefer Amaya, but Haji is an excellent consolation prize. The big question about Haji is whether he has the speed to be an effective winger, but he has too much skill not to grab with the second overall pick.

Orlando City stands a good chance of trading out of this spot, but if the Lions stand pat, they have a variety of options. Florida International striker Santiago Patino is a player Orlando City tried to sign as a homegrown player, only to have MLS reject the homegrown player tag. The Lions could take him, but Shinyashiki is a very tempting alternative who would be a better fit playing alongside Dom Dwyer than Patino, who is a bit too similar to Dwyer. There's a better chance the Lions deal this pick.

The Luchi Gonzalez era is underway at FC Dallas, and with a wealth of young talent already on the books, Dallas has to look at the draft pool and target positions where its academy isn't ready to provide an option. The looming departure of Chris Richards to Bayern Munich leaves a need for a central defender to develop and Montgomery is the most pro-ready player in the draft. He can step in and learn from veterans Matt Hedges and Reto Ziegler, and be groomed to replace Ziegler eventually.

The reported loss of standout Fire academy product Andrew Gutman to Scottish champion Celtic was a big blow, especially after the surprising retirement of starting left back Brandon Vincent. That could leave the Fire tempted to reach here at left back and take John Nelson. It will be hard to pass on Jones though, who several teams fell in love with this winter because of his blazing speed and improving technical quality. The Fire could be tempted to trade down and stockpile picks, especially if they don't rate Jones and decide not to take someone like goalkeeper Dayne St. Clair.

TFC currently has starting goalkeeper Alex Bono, but with back-up Clint Irwin having left, making a play for the Canadian goalkeeper makes plenty of sense. St. Clair has serious upside, and some scouts believe he could develop into the type of player who generates a transfer fee one day. TFC could also look to add some fullback depth and go after Akeem Ward or John Nelson.

The Loons have bolstered their central midfield this winter, and expect to have an improved defense in 2019, so rather than reaching for a defender, look for Adrian Heath to add a young winger to help push what is a bit of a mixed bag on the flanks. Buchanan has speed and the ability to beat defenders on the dribble, and Minnesota United will be thrilled to take a player who was, and is, in contention to be the first player chosen in the draft.

The Dynamo could look for some depth at forward, and both Santiago Patino and J.J. Williams could be tough to pass up, but Nelson is a promising left back prospect who could be groomed to replace legendary defender DaMarcus Beasley. Nelson is the highest-rated left back in the draft, and a player New England covets, but the Dynamo pounce first.

Brad Friedel could be tempted to trade up to ensure the selection of John Nelson, who he rates and knows from his time as U.S. Under-19 national team coach, but if the Revs stand pat and Williams falls this far, the Revs will count themselves fortunate. Williams is a raw but talented striker with a big frame and impressive athleticism. He needs time to develop, but he has a strong mentality and would be a good fit for Friedel.

If Dallas keeps both its first-round picks and lands Montgomery and Patino, it will be a good day. Patino is a strong lead forward in the Dom Dwyer/Alejandro Moreno mold, and he could definitely go higher in the draft. If he slips this far, he won't go any further.

The Revs have a reliable right back in Andrew Farrell, but adding depth at fullback is a priority for New England and Ward is capable of playing either fullback position. There are a few good fullbacks available, including Logan Gdula, who might have more upside than Ward, but Ward's a more polished defender and goes here.

The Galaxy have a need for some defensive reinforcements, but we should expect them to hit the international market for that. Look for Dennis te Kloese to grab the best player available, regardless of position, and that is Rivas, one of the most technically skilled players in the draft, and a player who should fit in well with Galaxy coach Guillermo Barros Schelotto's style of play.

Cincinnati's stockpile of draft picks should be able to land a quality right back, and Gdula is the best one in many teams' eyes. His size and ability to get forward make him an exciting prospect, and he should have time to develop on a Cincinnati team that already boasts Alvas Powell at the position.

D.C. United doesn't have many glaring needs, but avoiding international players and securing some cap relief are on the list, and selecting Dorsey would address both. A U.S. Under-20 winger/forward, Dorsey is the last Generation Adidas player available, and he would be joining a D.C. team where he could learn from the likes of Paul Arriola. A right back would be a smart pickup as well, and another Indiana product, Rece Buckmaster, could be an option.

The Rapids rate Shinyashiki, and could be tempted to trade up to land the Denver forward, but if they stand pat, the Rapids can grab another player they should know well in Bone, who was very impressive at the MLS Combine. One of the knocks on Bone is the fear that he would be bound by remaining service time with Air Force, but Bone believes he could play right away, which should help him secure a place in the first round due to his mobility, passing ability and quality in attack.

Cincinnati did its homework before stockpiling draft picks, and that homework will help the expansion team land a promising central defender in Hauser-Ramsey, who missed the MLS Combine because of an injury, but impressed scouts at another player combine earlier in the winter. An athletic and composed center back, Hauser-Ramsey would offer some good depth at a position where Cincinnati still needs to add a player or two.

RSL has been searching for pure striker options for some time, and while Sierakowski won't be expected to step in and start, he would give Mike Petke a strong target player who could be valuable off the bench, and eventually a starter if he can develop.

The Crew enter the draft with no glaring needs, though some depth on the wings and at fullback would make sense for Caleb Porter's squad. Enter Buckmaster, who really impressed at the MLS Combine as one of the steadier defenders at the position. Porter, an Indiana University alumnus, would be starting his tenure as Crew coach with a pick from the Midwest, but also a player who plays a position where it isn't always easy to find talent.

NYCFC could use some depth in central defense, but Dome Torrent will find it difficult to pass on the versatile and skilled Riley, who can play in central midfield and as a central defender. If NYCFC elects to go for a more pure central defender option, then Kamal Miller or Wouter Verstraaten would make sense in this spot.

The Sounders can use some depth in central defense after letting Tony Alfaro leave to Chivas Guadalajara this winter and Verstraaten is an excellent fit. He has the combination of size (6-foot-3) and technical quality to be a steal at this point in the first round.

Sporting KC has a promising fullback prospect in Jaylin Lindsey, and newly-acquired Rodney Wallace could theoretically provide some left back cover, but Peter Vermes won't mind grabbing Gasper, who won a national title at Maryland and impressed at the MLS Combine with his tenacious defending.

The Red Bulls need center back depth after unloading Aurelien Collin and losing Hassan Ndam in the expansion draft. They could be tempted to take Virginia bruiser Prosper Figbe, but Boateng is more athletic and counts as a domestic player due to him possessing a green card.

Asiedu's impressive showing at the MLS Combine drew comparisons to Diego Chara, so who better to take the tenacious defensive midfielder than the Timbers, who won't be troubled by his international status due to Portland's penchant for securing green cards for its foreign players.

The reigning champions don't have very many needs, and it makes sense that the team that scored big with a foreign player in the draft in Julian Gressel goes that route again with Bruening, a German-born forward who was very impressive at the MLS Combine. If Atlanta decides to go the domestic player route, then Wake Forest's Brad Dunwell or Oregon State's Hassani Dotson could be options.