Haiti may not be renowned for its footballers, but this summer, everyone was chasing perhaps the most exciting talent the Caribbean nation has ever produced.

Shining in CONCACAF tournaments at Under-17 and U20 level, she helped Haiti become the first ever Caribbean nation to qualify for the U20 World Cup, and has already made her breakthrough with the senior team.

The midfielder has also broken goalscoring records within CONCACAF, despite it being a confederation that also hosts the world champions, the U.S. women's national team, and Canada, this summer's Olympic gold medallists.

“We had the whole world calling for her,” Takumi Jeannin of A&V Sports Group, the teenager’s agency, tells Goal. “Clubs in Asia, half of the clubs in the NWSL called us, clubs even in Eastern Europe. Literally, I think we had like 50 clubs contacting us for Melchie.

“But what stood out for us is that Melchie was very smart in the process. She didn't think about money once. It was always the best club that will help her develop as a player.”

That club is Reims, who finished an impressive sixth in the French top-flight last season. There is already a familiar face there for Dumornay, in Haiti team-mate and close friend Kethna Louis, and it is a club that places big emphasis on young players.

“I know that it's a very good place that develops talents and I want to be part of those talents,” Dumornay tells Goal in an exclusive interview.

I am truly honored 🥰 to be one of the nominees among the 10 best young u20 talent in the world🇭🇹☄️ @goal pic.twitter.com/TJLX0S7hmV

It will not be her first trip to France for footballing reasons, though.

That is where she played the U20 World Cup with Haiti, her “best memory” with her country. It is also where she went for a trial with the seven-time European champions, Lyon.

After sessions with both the U19s team and the seniors, with France icons Wendie Renard and Eugenie Le Sommer among those who looked after her, a deal was not possible because of her age, but it is an experience Durmornay carries with her.

“I saw [the] differences between the U19 and the pro level in terms of intensity, details, the speed of play and things like that. It was very eye opening in some ways,” she explains.

“It just made me want to play for a big club as soon as possible, but I know there are some steps that I need to take to get there. Playing for Lyon one day will be an absolute dream and that's what I’m working towards every day.”

That clubs of Lyon's stature were interested in her has helped create a hype around Dumornay, who made Goal's NXGN lists of the world's best teenage footballers in both 2020 and 2021. That buzz is particularly prevalent in her home country.

“Many people now are like, 'Oh my god, you're moving soon. So who is it? Paris Saint-Germain or Lyon?'” she laughs, speaking ahead of her move to move to Reims being announced on September 10.

“I know that it might disappoint some people in some way that I'm moving to Reims, but people who know football will understand my decision. For the other people it's okay. I will prove them wrong in the future.”

The future is constantly cited throughout Goal's long chat with the teenager. Dumornay picks out the areas she wants to develop with Reims, namely her ability to use both feet, her physicality and the way she looks after herself.

Real Madrid midfielder Toni Kroos is cited as someone she looks to for inspiration on where she can improve, as are Lionel Messi and Cristiano Ronaldo, inevitably. “I want to become a monster on the field, in a way that nobody can stop me,” she says.

There is also already one huge aim that she hopes to achieve in her career, beyond the desire to win titles and awards. 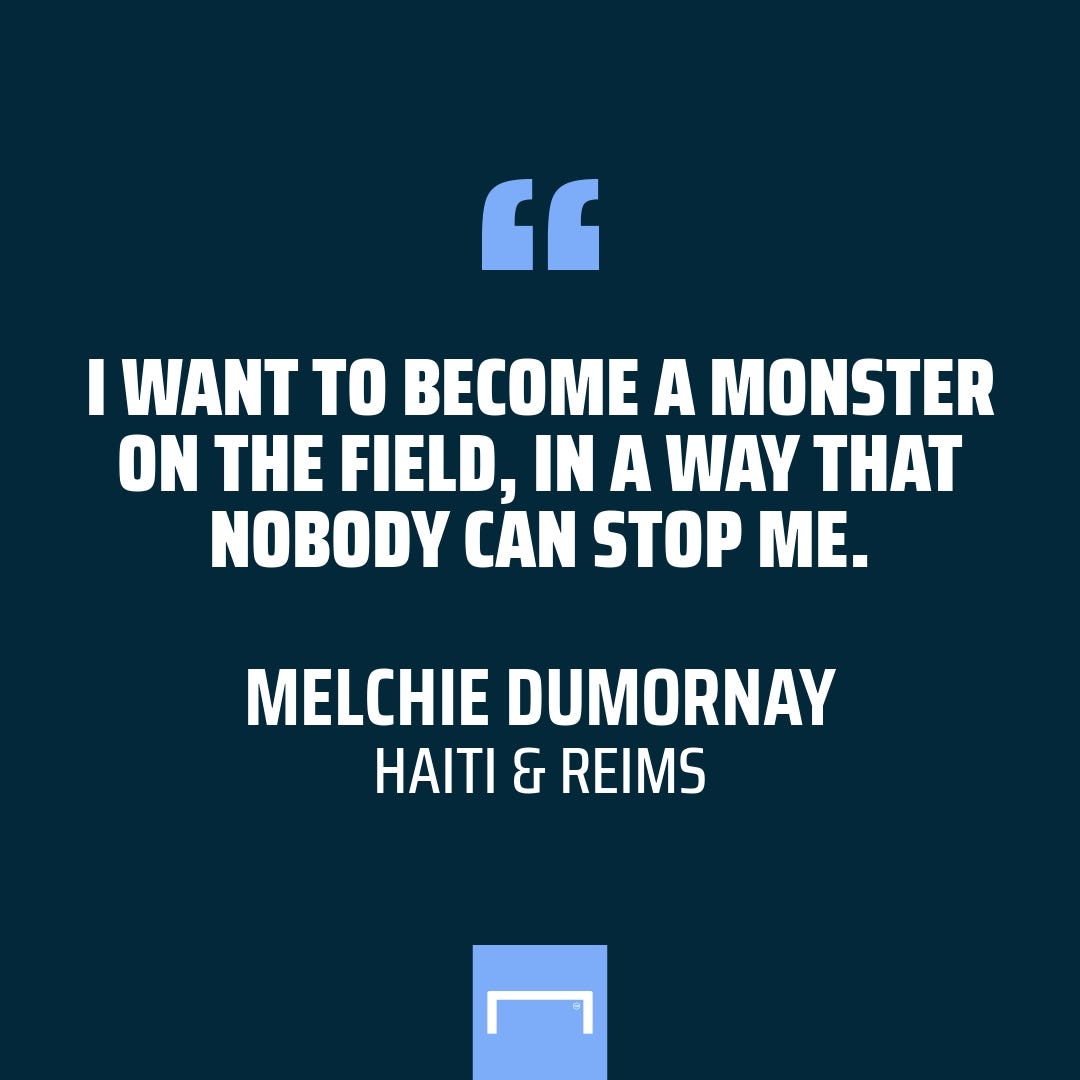 “If God allows me to have a lot of success in the future, which translates into financial success, I want to be able to open an academy back home in Haiti to provide opportunities to players that I didn't have myself,” she says, ending the interview on a perfect note.

“Just providing a better environment to the next Haitian talents. I hope to be able to help more players like me come to Europe and just make Haiti a good place to play football overall, for both girls and boys.

“In Haiti, there are so many talents, not only in soccer, that just don't get a chance. I got that chance to be in an academy, but there are top players and top talents everywhere.

“It's important to try and put an eye on Haiti, to not miss out on so many talents. I hope that one day more people get the chance to get out of there.”

As well as her fantastic footballing ability, particularly the intelligence of her play, it is comments like that which make it incredible that this is just an 18-year-old about to embark on her first professional adventure.

It is no wonder she has the world at her feet.