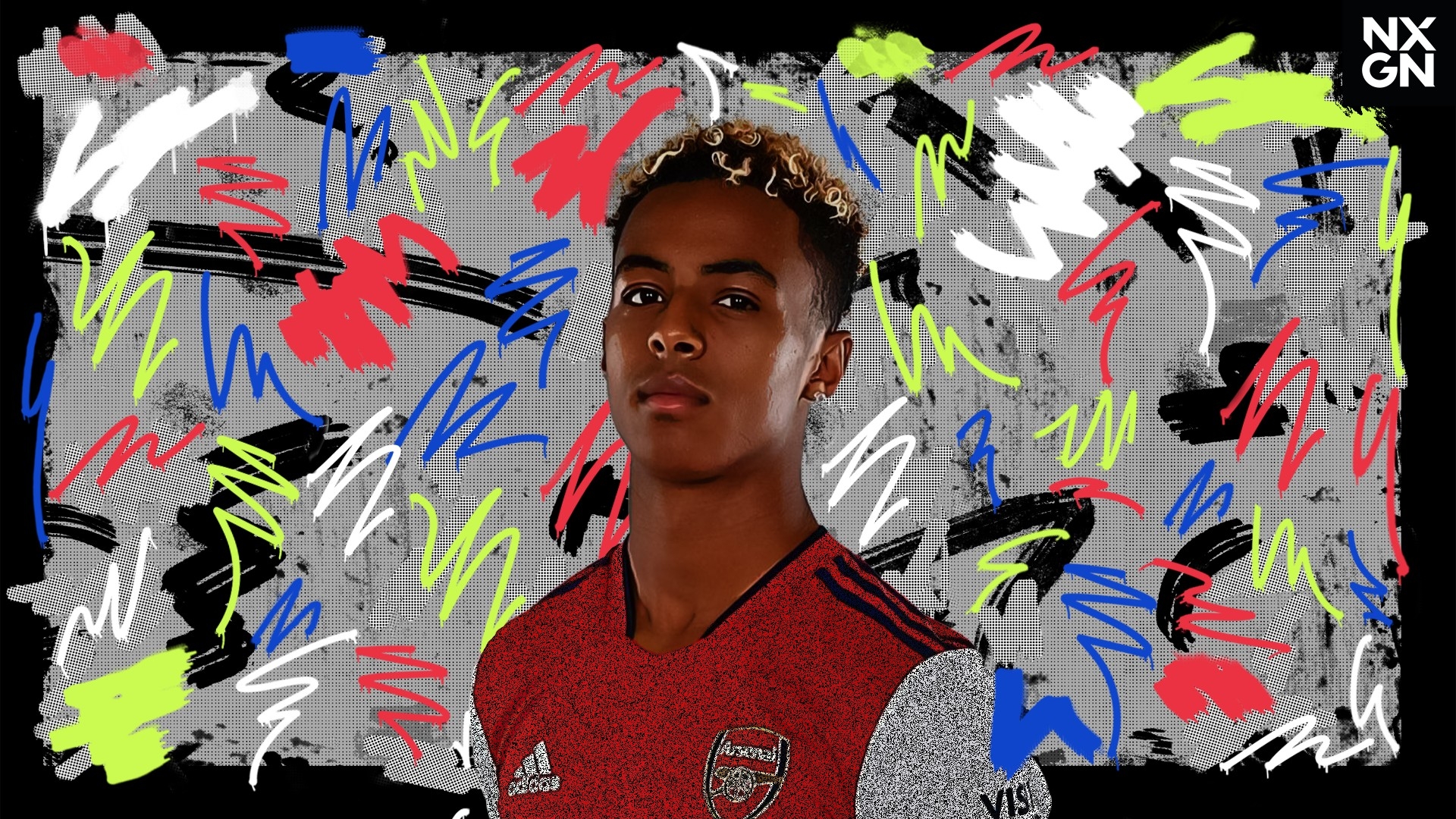 There are not many 12-year-olds who suddenly find themselves as the centre of attention in the world of football.

But that is exactly what happened to Arsenal youngster Omari Hutchinson when he became an internet sensation overnight thanks to his remarkable ability with the ball at his feet.

Hutchinson was the star of a video which went viral online alongside the F2 Freestylers, with football fans from around the globe stunned to see someone so young pulling off the tricks he had been teaching himself since the age of five.

“It was a mad experience,” Hutchinson tells Goal in an exclusive interview. “Everyone at my school wanted my signature and my Instagram was blowing up!

“I didn’t really know how to react. I was excited, but I was 12 and it was coming at me fast.”

Now 17, Hutchinson looks back on that experience fondly.

The video remains online for everyone to see, but he has moved on, though the skills and tricks that brought him to the world’s attention five years ago are why he is one of the most exciting young talents coming through at Arsenal right now.

Hutchinson is part of an exciting new breed in north London. He is part of a crop of players who have just broken into the Under-23s set-up for which there is huge excitement, such is their quality and potential.

There is midfielder Charlie Patino, winger Kido Taylor-Hart and defender Zane Monlouis, to name just a few. All have come through from Arsenal’s Hale End academy and worked their way up through the age groups alongside each other.

New U23s head coach Kevin Betsy has now been brought in to nurture and develop them as they attempt to follow in the footsteps of the likes of former NXGN nominees Bukayo Saka, Emile Smith Rowe and Eddie Nketiah in making the step up from the youth ranks to the senior squad over the coming years

“There are players like me, Zane, Charlie, Brooke (Norton-Cuffy), Marcelo (Flores) and Jack (Henry-Francis), we’ve been together since U12s and U13s,” explains Hutchinson.

“We’ve been with each other through highs and lows, so the relationship between us is very close. We are like a family and we all want to see each other do well.

”It’s just like the group with Emile, Saka and Joe Willock. If everyone keeps working hard, some of us should hopefully one day get some first-team experience.”

As difficult as things are at Arsenal right now, the success of the Hale End academy continues to be something that everyone connected to the club is quite rightly proud of.

Saka was named Arsenal’s player of the year in 2020-21, and Smith Rowe’s introduction into the first-team last season helped prompt a massive upturn in form during the second half of the campaign.

He has now been rewarded with a new contract and the iconic No.10 shirt, while Saka proudly wears No.7, following in the footsteps of legends such as David Rocastle and Robert Pires.

And for players like Hutchinson who aspire to one day hit such heights, watching players from the academy go on to flourish in senior football is something that fills them with belief that anything is possible.

“When we were at Hale End as U12s, we would see Joe (Willock), Reiss (Nelson) and that lot and we would think they were superstars,” he says.

“Even going to Emirates games and bumping into them, we would always want a picture, and when they used to play for the U23s, we would go and support them.

“Growing up, we wanted to be like them. Saka used to tell us to work hard and that we were not far behind and that used to give us confidence.

“At Hale End there are pictures up on the wall of the boys that have made it and you just want to be up there as well so all the youngsters are looking at you.”

Hutchinson’s journey through to the U23s at Arsenal has been an interesting one.

He started out as an eight-year-old with Charlton Athletic, where his older brother Oshaye was part of the U15s set-up.

“I got scouted by them when I was playing football in the car park while he was training,” recalls the young attacker.

Even at that early age, Hutchinson was already a bag of tricks with the ball at his feet, thanks largely to years of playing futsal, the small sided-game which is played so widely in South America.

“I used to do it every day after school,” he says. “It was just easier and enjoyable.

“The coaches just said do all the skills you want. You had the freedom to just have fun. I used to watch a lot of Falcao, the Brazilian futsal player. He inspired me a lot.”

He adds: “I’ve always been known as a little skiller. I would say half of it has come from futsal. But also when I was younger, I used to do skills in my front room, in my garden and in my kitchen.

“Straight after school I would get changed and do skills. I loved it.”

Hutchinson stayed with Charlton for two years, but left after his brother got a scholarship at Sheffield United.

The Addicks, however, put a £6,000 compensation clause on his head, and that made finding a new club difficult - as few could justify paying such a price for a 10-year-old.

He had trials with Arsenal, Tottenham and Brentford before he decided to take a break from academy football and went back to playing futsal with his friends.

“Having that time off really helped me develop as a kid because there was less pressure,” Hutchinson said. “I was just working on myself, doing my thing at futsal.

“I worked on my technique and my weaker right foot. It really helped.”

About a year later, Omari’s father received a call from a scout connected to Arsenal and he was invited back for another trial. He impressed during his second spell with the Gunners, earning himself a contract before joining up officially with the U12s.

He started out as a left-back, but his attacking prowess and his ability to trick his way past defenders was always very clear.

And it was that ability that catapulted him into the world’s attention thanks to his video with the F2 Freestylers, which went online soon after his move to the north London outfit.

It all started thanks to a chance meeting during the Pele Tournament, which saw sides from around the world descend on south London to take part in a competition which was hosted by the Brazilian legend.

“We finished the tournament and all the teams came round in a huddle, and the F2 Freestylers came out and started showcasing their skills," Hutchinson remembers.

“They asked one member from each team to come out and do a skill and all the boys were saying ‘go on Omari, go on!’

“So I went up there and did it. They gave me the ball and I just started doing my skills. When we got a picture with Pele afterwards, he said something like ‘that was amazing’ in his Brazilian accent.

“Then later on that night, Jeremy Lynch from the Freestylers called my mum and said he wanted to do a video with us.

“So I did the video and it just went viral from there.”

As Hutchinson progressed through the youth ranks with Arsenal, he started to be utilised further up the pitch, either operating out wide or even as a No.10.

He signed his first senior contract in November 2020, and was the stand-out performer for the U18s during his first season as a professional, scoring seven goals and contributing a further eight assists in the league.

The talented young winger has started this season in similar form, with his impressive early performances for the U23s seeing him nominated for August's Premier League 2 Player of the Month award.

Hutchinson has also been receiving the occasional invite to train with the first-team and earlier in the summer he earned a call-up to Mikel Arteta’s squad for their pre-season trip to Scotland.

As well as spending a week training with Arsenal’s’ senior stars, the England youth international was also given 15 minutes on the pitch during a game against Hibernian.

“The boys really made me feel welcome,” Hutchinson said. "They were really friendly, like family.

“I was with them every day, training, I was getting used to being around them. I would sit on the table with the Hale End boys, talking to them and they were telling me to just be myself, to keep working.

“[Alexandre] Lacazette gave me lots of help as well, telling me not to be nervous, and [Pierre-Emerick] Aubameyang is such a funny guy to be around. When we practised free-kicks, it was just like being with my mates.

“They were doing them and I was watching. Then I was like, ‘let me hop in’. I was putting it top bins, bottom left. It was great.”

Hutchinson’s impressive progress saw him given another first-team opportunity during the current international break, when he came off the bench during a 4-0 success against Brentford in a behind-closed-doors friendly at London Colney.

But despite getting an early taste of what it is like to be with the senior side, for now his focus remains fully on the U23s - for whom he has two goals and two assists in three games already this season - and what should be an exciting campaign for Betsy’s young and vibrant squad.

“I’m just taking things step by step,” he said. “I just want to concentrate on my performances with the U23s.

“I have to keep staying consistent, look to score, to assist and influence games the way I can.

“Everything else will go from there.”