When Steven Bergwijn left the Ajax academy at the tender age of 13, a career as a professional footballer seemed like a distant dream at best.

But, whereas leaving the Amsterdam giants would be the end of the road for most players in that age category, it was only the beginning for Bergwijn.

PSV were quick to let the versatile attacker know they would happily take him on board, and even though the move meant he would no longer be playing in his native Amsterdam, travelling back and forth to Eindhoven was not much of an obstacle.

“Leaving Amsterdam wasn’t that difficult to be honest, because my parents always supported me and drove me to Eindhoven and back all the time,” Bergwijn told Goal and Voetbalzone.

“It did take a bit of time to get used to my new surroundings. You obviously end up in a different city, with different people. But they gave me a warm welcome.”

Once fully integrated into the PSV academy, Bergwijn hit the ground running and he would soon make a name for himself at international level, too.

The forward played a key role in Netherlands’ run to the final at the Under-17 Euros in 2014 and was voted player of the tournament after three goals in four appearances.

Inevitably, Europe’s finest came knocking, but the ambitious youngster had no intention of leaving Eindhoven just yet.

“No, I did not really consider leaving,” he added. “I was obviously still quite young and I really wanted to make it into the first team here.”

And making it into the first team he did.

Bergwijn was handed his first-team debut in the KNVB Beker win over Almere aged just 18 years and 21 days, before making his Eredivisie bow toward the end of the season.

He would soon find out that there was a significant difference between breaking into the first team and becoming a key figure, however.

“I would play one day, then sit on the bench the next and be back with Jong PSV again another week,” the forward continued.

“That was quite difficult for me. You just have to be patient, though. PSV always wanted me to take things one step at a time and take it easy.

“But in the end, you’ve all got to do it on your own. I never doubted myself. I have always been saying that I would make it as a professional player.”

One of the coaches taking Bergwijn under his wing during those difficult days was Ruud van Nistelrooy and he has not forgotten about the former Manchester United striker’s influence.

“I worked with him at the U-19 team and he was part of the coaching setup in 2017-18 as well,” the Netherlands international continued.

“I learned a lot from him, especially when it comes to finishing.”

Van Nistelrooy himself, meanwhile, has been impressed with Bergwijn's development in recent years.

“He’s got a lot of personality as well, he’s got a very strong character, so he’s definitely one of the players with great potential.” 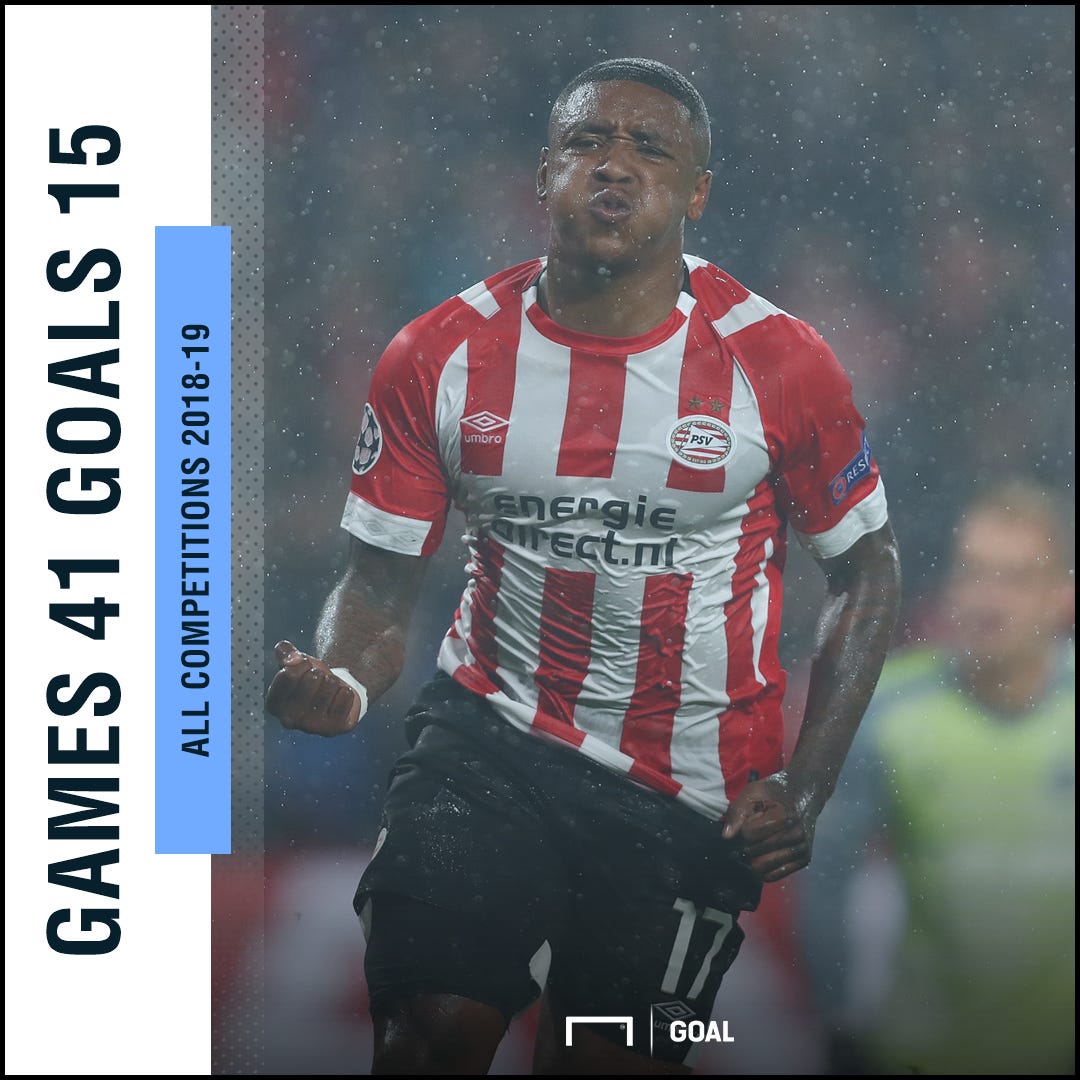 With 15 goals and 13 assists from 41 appearances in all competitions in 2018-19, there is no denying Bergwijn has indeed become a decisive player for PSV under head coach Mark van Bommel.

“I have a good relationship with Van Bommel,” the winger went on.

“It’s hard to describe what it is that makes him such a good coach. Sometimes it almost feels like he is one of us. He knows what’s on our minds and what we’re thinking about.

“He obviously used to be a player himself as well. That definitely makes a difference. It just helps in the relationship between players and coach.”

His sublime performances have earned Bergwijn comparisons with Memphis Depay, another attacker who came through the ranks of the PSV academy, and he feels honoured to be likened to the club’s all-time record sale.

“I’ve heard that comparison a lot of times,” he went on. “Memphis is a fantastic player, so it’s a compliment if people say that.”

The inevitable next step would be a move abroad and his coach would not be surprised if Bergwijn commanded a similar transfer fee as when Depay joined Manchester United for an initial price of €34 million back in 2015.

“It’s always difficult to compare players, but Memphis was playing more or less in the same position and has similar characteristics,” Van Bommel stated.

“It could be possible that a club pay almost the same amount for Steven as they did for Memphis.

“But the transfer market always changes, it also depends on which club is after a winger. Of course, wingers are always interesting, but it’s hard to say whether he will go for about €40m.” 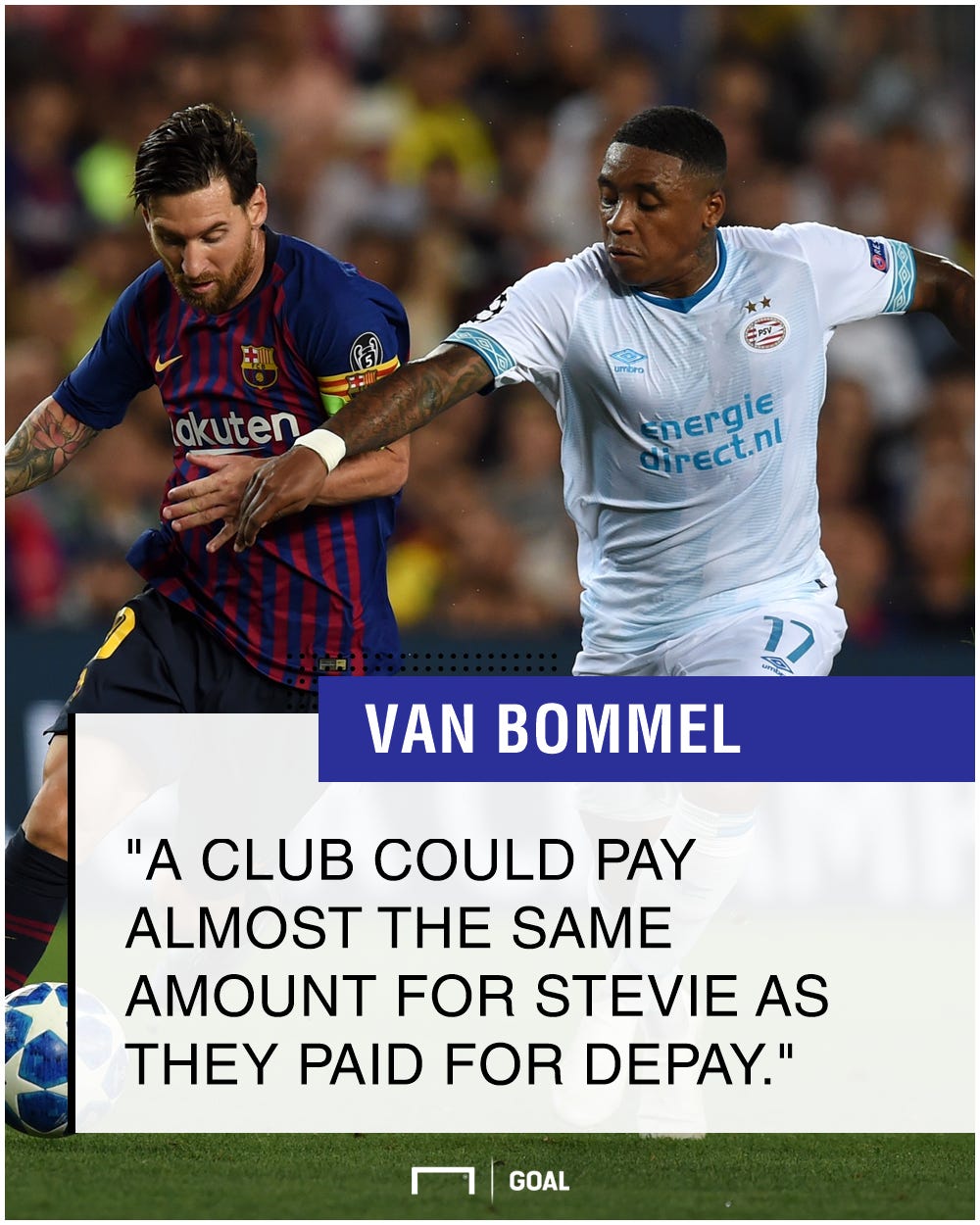 Manchester United are one of the clubs that have been credited with an interest in signing Bergwijn, with Tottenham, Inter and Ajax all believed to be keeping a close eye on his situation, too.

Following in the footsteps of Depay and moving to Old Trafford might be an intriguing option, but the 21-year-old is in no rush to make a move and has no plans of leaving PSV for just any club.

“Manchester United are definitely a nice club,” he admitted.

“I am still only 21 and I am in no rush to leave PSV. It would have to be a good club that have a clear plan with me.

“I also think that when you join a new club, perhaps a better team, you automatically raise your game because of the level of the other players on the training pitch.

“If something good comes up, then yes, I would be ready for it. If that doesn’t happen, I will happily stay at PSV. I am happy here and feel comfortable at this club.”

Regardless of whether a transfer happens this summer or not, Bergwijn is not afraid to set the bar high when it comes to his personal objectives.

“I would love to win the Champions League, the Euros and the World Cup, all of them,” the gifted forward went on.

That might be easier said than done, but there’s no denying Bergwijn has a knack for winning silverware. At the tender age of 21, the PSV star has already won three Eredivisie titles as well as two Johan Cruyff Shields.

And it would be foolish to bet against Bergwijn adding to that in the years to come, be that with PSV or one of Europe’s superclubs.