The World Cup winner put in a classy performance on her debut, despite only having joined up with her new team-mates this week

As far as debuts go, Abby Dahlkemper’s for Manchester City was as comfortable as they come.

After signing for the club earlier this month, her bow in City blue was hardly going to drum up as much excitement as the first glimpses of Sam Mewis and Rose Lavelle, her two more attacking United States team-mates who joined the club in the summer.

The closest the centre-back got to the opposition goal, after all, was when she sauntered up for an 80th minute corner in City’s 4-0 win over West Ham on Sunday, before quickly needing to retreat back to her position.

But for a team who haven’t had the defensive stability they would’ve hoped so far this term, her first 90 minutes in Manchester offered plenty of encouragement ahead of two potential title-deciding fixtures against Arsenal and Manchester United.

This season, in 12 Women’s Super League games, City have already used eight different combinations in their back four, including four different centre-back pairings. Five of those quartets have only been used on one occasion.

Centre-back Gemma Bonner and left-back Demi Stokes have been missing for several weeks with injuries, while the versatile Esme Morgan will now be out for some time with a thigh problem. The addition of one of the best centre-backs in the world, then, couldn’t be timelier. 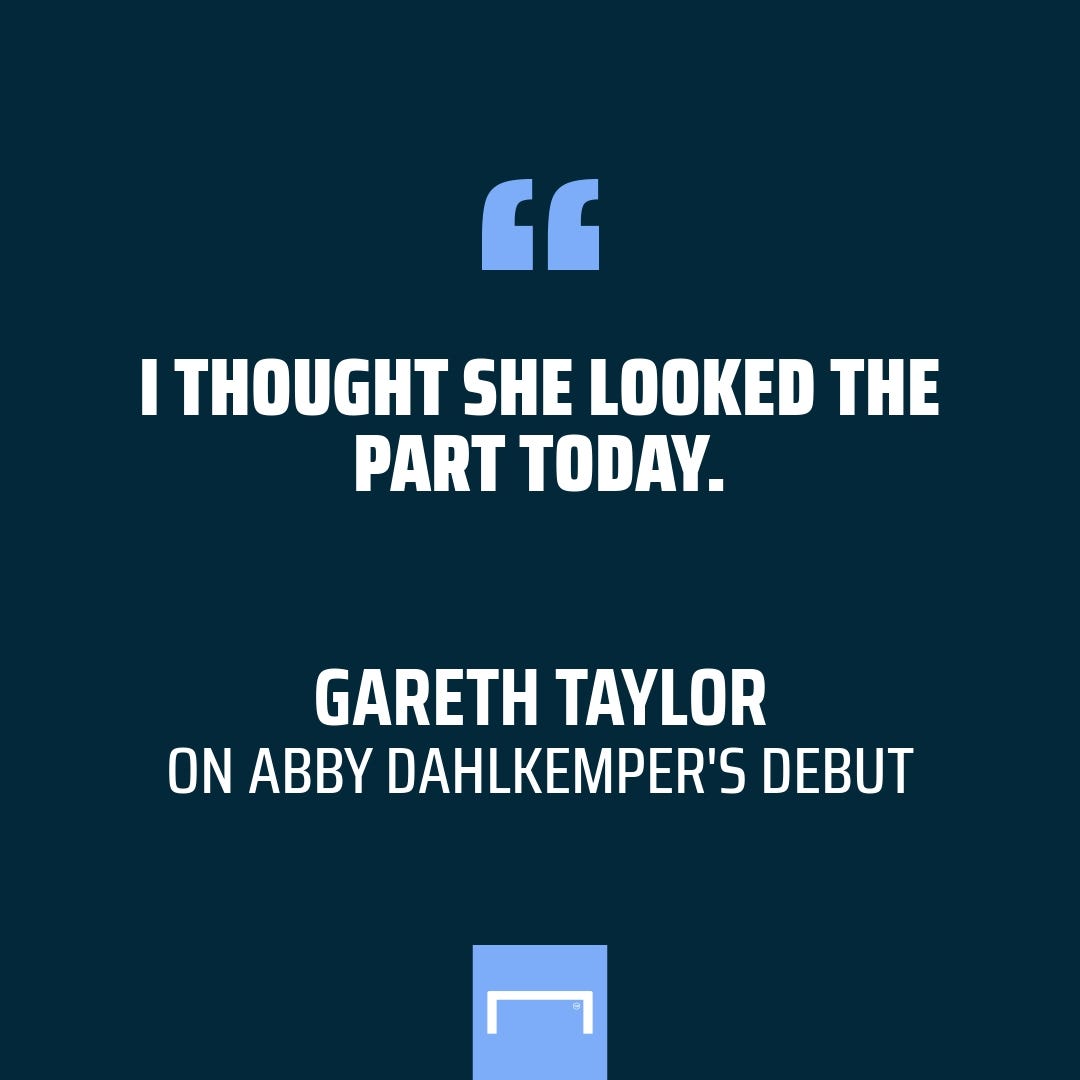 Dahlkemper, who ranked at number 20 in last year's Goal 50, didn’t have much to do in her first game, with West Ham failing to have a single shot on target, but her composure and class was clear for all to see.

With not a single foul given away and 111 passes completed, for an accuracy of just over 90 per cent, the calm and comfortable presence she will offer to City as they approach the business end of the season will be crucial.

“I thought she looked the part today,” head coach Gareth Taylor said after the game. “She settled in really nicely. She made some good decisions in the build-up play.

“As a performance, it was a real positive one from her, given that she's [only] had three or four training sessions with us.”

With her playing just two lots of 90 minutes since mid-October, both for her country, it was no surprise to hear Taylor talk about giving her time to settle in his press conference before Sunday’s game.

But as the injuries continue to trouble City’s back line, it’s clear their new signing will be needed right away – and she’s certainly someone you can call upon to deliver.

The fact she’s signed for two-and-a-half years, rather than on one-year deals like many of the WSL’s American imports, is even more exciting for the club.

A World Cup winner, three-time NWSL champion and a player who was named the NWSL's Defender of the Year in 2017 and in the league's best XI for the last three seasons, Dahlkemper can help City rediscover the defensive stability that has helped lead them to so many titles in years gone by.

With injuries and the impact of Covid-19 playing its part, the team have already conceded more goals this season, with 10 shipped in 12 league games, than they did last season, when they let in just nine in 16 outings. They’ve also kept just five clean sheets this term, having had nine this time last year.

In a title race that is likely to be decided by such fine margins, rediscovering their consistent defensive solidity will become even more important.

Asked if City’s next two league games, away to Arsenal and then at home to Man Utd, will be title defining, Taylor didn’t play anything down.

“I think they are,” he said, adding that, with Chelsea also to visit City before the season ends, he believes the title will “come down to those games”.

It’s not a bad time, then, to have just added a world-class centre-back to your team.