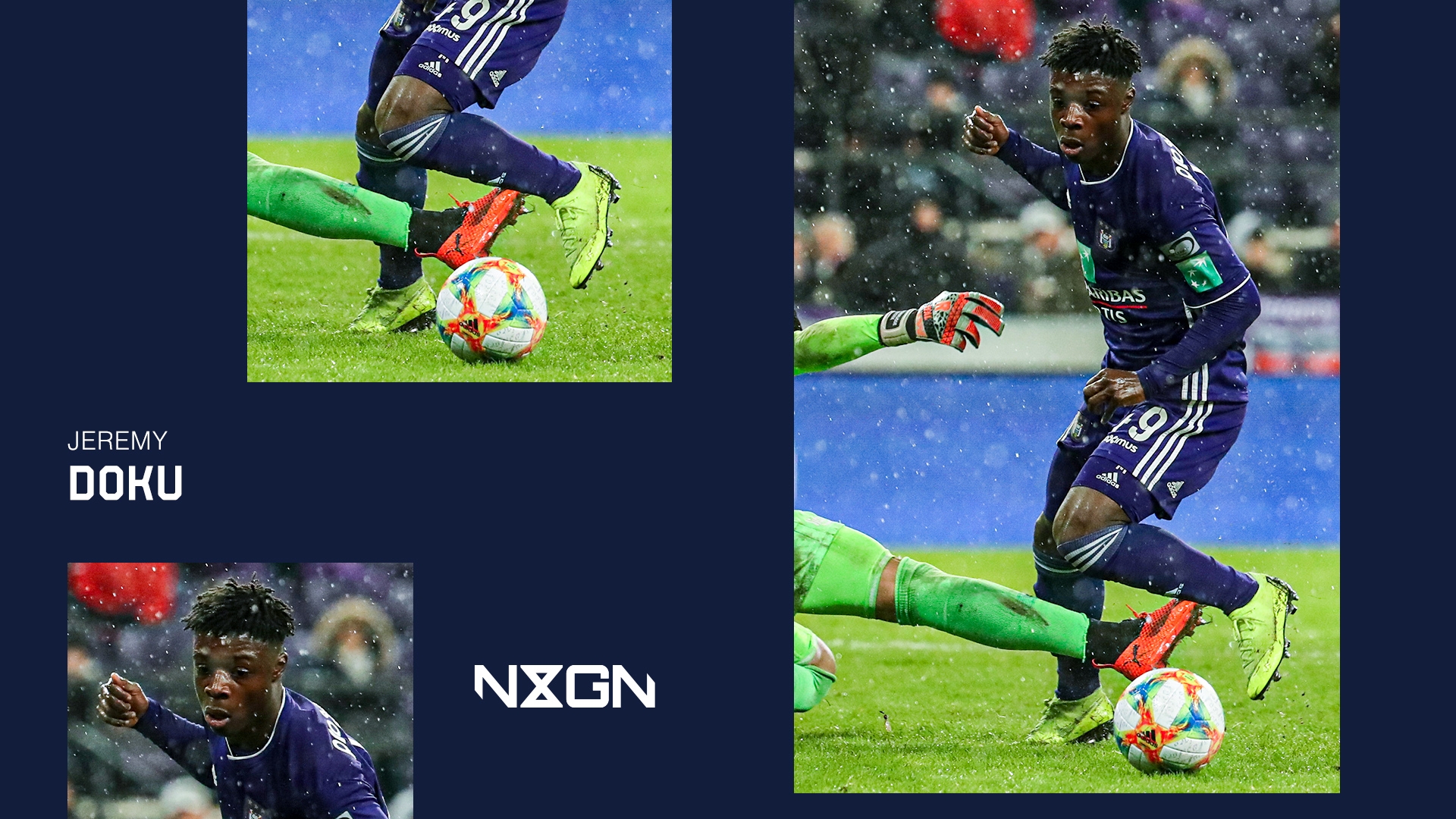 Jurgen Klopp certainly has an eye for a player.

The Liverpool boss has helped put together one of Europe's great teams on Merseyside, though the majority of his signings were regarded as players with potential when they arrived at Anfield, rather than world-beaters.

The German coach has done an outstanding job in coaxing the very best out of his Premier League-winning squad. But he, along with Liverpool's much-vaunted recruitment team, must also be credited with being able to spot the potential gems in the market.

And getting a glowing reference from the Reds boss is every young player's dream. That is exactly what happened to Jeremy Doku when he visited Liverpool's Melwood training ground in 2018.

The then-16-year-old was visiting the club as he considered his options ahead of signing his first professional contract later that season. That was when Klopp made his pitch.

"Klopp explained how he saw a potential successor to Sadio Mane in Jeremy," Doku's father, David, told Het Nieuwsblad in an interview during which he explained just how welcoming Liverpool had been as they attempted to convince the teenage winger to join them.

"At the age of 16,  Arsenal, Liverpool, Chelsea, Man City, Ajax and PSV were interested. We then visited clubs like Liverpool and Ajax. My preference was Liverpool.

"Steven Gerrard showed us videos with tactical analysis. At the training complex [Simon] Mignolet, Mane and [Georginio] Wijnaldum came to talk to us. How we were received there - damn!"

Despite Liverpool's eagerness to bring Doku to England, he instead opted to stay with boyhood club Anderlecht, though it needed the intervention of a player who, at the time, was plying his trade for Manchester United to finally help make his mind up.

"[Former Anderlecht general manager, Herman] Van Holsbeeck was convinced that he would lose Jeremy to Liverpool for almost nothing," Doku Sr. explains. "But Anderlecht did everything to keep our son.

"They got smart with a video from Romelu Lukaku. As Jeremy hesitated to leave, that took away his final doubt.

"It was an idea of ​​youth director Jean Kindermans. Romelu said in the video that it was better to break through in Belgium first and then leave through the main gates."

Lukaku did just that during his youth in Belgium, and now Doku is aiming to follow in his footsteps after an impressive first full season in the senior ranks at Lotto Park.

Success is a journey, not a destination‼️ #JD49

Having joined the 34-time Belgian champions as a 10-year-old from his local club in Antwerp, Doku made his first-team debut as a substitute for the final 12 minutes of a 4-2 defeat to Sint-Truiden in November 2018.

That would be the first of six appearances over the course of the 2018-19 campaign, which ended with him playing the final 22 minutes of his side's play-off defeat to Gent.

The summer of 2019 saw Vincent Kompany take over the managerial reins, and after impressing in pre-season, Doku was handed a start in each of the legendary centre-back's first three league matches in charge.

But with Anderlecht struggling to adapt to their new player-coach, Doku soon found himself out of favour, with the tricky wideman limited to short cameos off the bench and reserve-team appearances to maintain his match fitness.

Four goals in three games for the reserves saw Doku reinstated to Kompany's matchday squad in December, and after scoring and assisting in a 32-minute appearance against Oostende, he has been a regular starter ever since.

Playing predominantly off his favoured right-hand side, Doku made 24 appearances across all competitions before the 2019-20 campaign was curtailed by the coronavirus pandemic.

In what turned out to be his final match of the campaign he scored two goals himself and laid on a third in a 7-0 win over Zulte Waregem, taking his tally for the season to four goals and three assists.

A skilful dribbler who is comfortable on either flank, Doku has been compared to Raheem Sterling in some quarters, though it is felt he needs to work on his two-footedness to fully reach his potential.

There is even a school of thought within Belgium that he could become Eden Hazard's long-term successor in the national team as the Red Devils begin to prepare for life after their 'Golden Generation' have moved on.

"I have rarely seen a player with so much explosiveness in the first metres, who can accelerate so quickly and change direction, while also maintaining perfect control of his body and the ball," former Anderlecht manager Hein Vanhaezebrouck told Het Nieuwsblad when asked to assess Doku.

"His left foot is currently just mostly to lean on. There is still a lot of work to do. Defenders now know that they should not cover his left, that they can let him cross with it. If he perfects his left [foot], he is fully capable of reaching the top.

Already capped four times at Under-21 level, Belgium manager Roberto Martinez is understood to be a fan of Doku's having watched him in the flesh while he played at the 2019 U17 European Championships in Ireland.

There remain some hopes that the 18-year-old could still opt to play his international football for Ghana, leading to reports suggesting that Doku may even earn a call-up to Martinez's squad in the autumn should he pick up where he left off next season.

Whether he will still be playing for Anderlecht by then remains up in the air. Liverpool continue to be linked with signing him while Real Madrid, Manchester United, AC Milan and Newcastle have also been mooted as possible destinations.

Doku's current contract runs until 2022, and despite being rated as a €20 million (£18m/$23m) player before Covid-19 turned football on its head, there have been suggestions - not least from his agent - that he could be snapped up for far less this summer if he indeed is willing to move.

"He is happy here with us in Antwerp. He will stay with his parents for another two to three years," his father, David, told Gazet van Antwerpen in May, though he was not totally dismissive when the subject of his son moving on from Anderlecht was brought up.

"That [a transfer] is a difficult question, isn't it? He feels great at Anderlecht, but you can never rule it out."

Whether it comes this summer or not, it is only a matter of time before Doku does fly the nest.

It would not be a surprise if it is Klopp who lands the player he saw as Mane's successor, either. The Liverpool boss tends to find a way.