Goal explains how to trade in FIFA 20, discussing which types of players to buy and sell on the market in order to make the most coins

Playing matches in FIFA 20 is one way to make FIFA Ultimate Team coins, but not everyone has the time to play 40 games over three days in FUT Champions Weekend League or to play all the Squad Battles every week. Buying FIFA Points with real money is expensive and is not guaranteed to get you great rewards as packs from the store have random contents.

The most reliable way to build your coin balance is to trade on the market, by buying players for less than their market value and then selling at peak times. This may sound time consuming, but there are plenty of different approaches you can try to maximise your income.

What is the Bronze Pack Method?

The 'Bronze Pack Method' is the cheapest but most time-consuming way to make coins in FIFA Ultimate Team. It involves buying regular bronze packs for 400 coins and then selling or quick selling the contents.

You should get at least three players in every pack, all of which can be listed for 150 coins with a Buy Now price of 200 coins. Rare bronze players can sell for even more as they are often needed to complete Squad Building Challenges (SBCs), so compare their prices to others on the market before selling them. Bronze players may not sell straight away, so re-list them again and again until they do. Even the lowest-rated players will eventually sell as people will need them for SBCs or objectives.

Many consumable items are not worth anything on the market and can be quick sold - balls, jerseys, stadiums, manager and player contracts. However, fitness items, managers from good leagues and rare cards usually can be sold on the transfer market. Squad Fitness items are the best consumable you can get from bronze packs as they result in an immediate profit from your 400-coin outlay.

The profit with the Bronze Pack Method is often small, but you will make a profit if you put the time in and keep re-listing unsold bronze players on the transfer market.

Which players should I use to trade?

The best players to trade in FIFA Ultimate Team are players you are familiar with from watching particular leagues in real life. That helps you know who will be an in-demand full-back or which striker is flavour of the week or month.

Also, by trading the same few players repeatedly, you will learn what prices they usually sell for and when is the best time to make a profit on them. The best time to sell is usually in the evenings or weekends when most people are online and trying to improve their squad, while overnight or early morning is when you can often find players to buy for the lowest price.

Knowledge of a particular league will also help you know which players sell for more coins than their higher-rated alternatives. These are usually players with high pace ratings or from popular clubs. As a result, they can sometimes be listed too cheaply on the market and you can find bargains during your transfer target searches.

Which players can I buy low and sell high?

Many people do not have the time or patience to get into bidding wars on the transfer market and will use the Buy Now price (previously called Buy It Now and thus abbreviated to BIN). Players can always be bought for less than their Buy Now price, so many traders put in speculative bids on many versions of the same player to sign those players for cheaper and then relist at their Buy Now price to make a profit.

You can have up to 100 items on your Transfer List at any one time, so buying multiple copies of the same player at a good price is a wise investment as you can help create a monopoly on a single player and then sell him on for a bigger profit. Some really rare silver players are sometimes 'price fixed' like this as one person buys every copy of them on the market and then can determine what price to sell at. This often happens when the SBCs for individual leagues are released, as a club may only have one right-back that can be used to complete the challenge.

Sniping is buying players who have been listed far too cheaply on the transfer market, but getting them before anyone else has had a chance to bid. This is also called the '59-minute Method' as they usually sell within the first minute after being listed on the market.

The best way to do this is to look for specific players from specific leagues and then use the prices in the transfer filter to ensure you are not searching through pages and pages of players you have no interest in buying. Often, you will find no listings if your filters are narrow, but have patience and keep searching until something appears - but when it does, you need to be quick to buy it straight away before someone else does.

Read our complete guide on how to snipe in Ultimate Team.

Who should I buy for short-term investments? 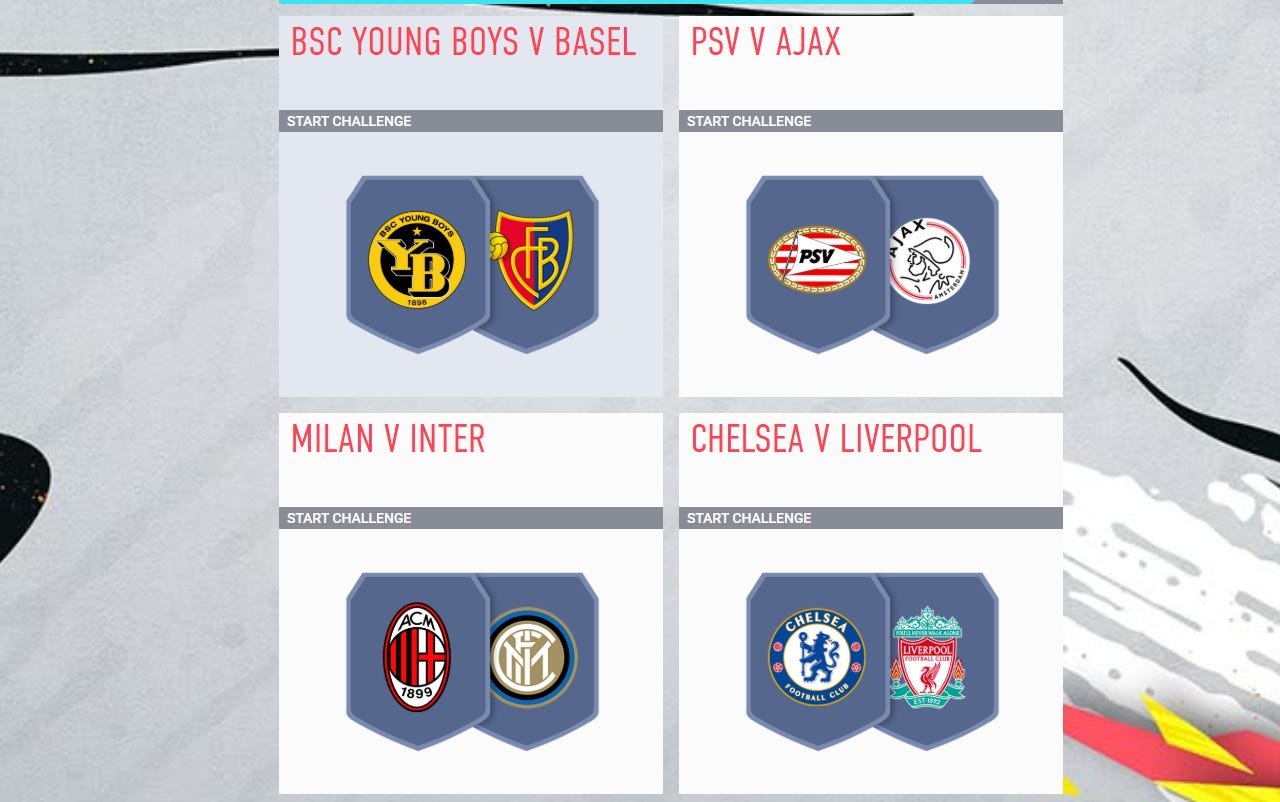 Each week, EA Sports releases Marquee Matchups as Squad Building Challenges. These SBCs include four important games from the upcoming weekend, usually rivalry or derby matches or else games featuring headline teams. Some of these will be obvious well in advance, such as Manchester United vs Manchester City, but knowing the big games from smaller leagues can help you turn a profit.

Investing in players from lesser leagues who may be required in SBCs can turn a quick profit. Members of FIFA Forums or the FIFA subreddit usually discuss their Marquee Matchup predictions in advance and keeping an eye on these threads can help you get an advantage over casual players.

Which players are long-term investments?

The introduction of SBCs in FIFA Ultimate Team has made a lot of players more valuable for trading. In-Form and Team of the Week Players are often needed for SBCs and thus are very good long-term investments, especially if they are high-rated TOTW cards or from popular leagues.

Each player card has a discard or quick sell value which is almost 10,000 coins for TOTW cards. This means, you can buy many TOTW players for just over this amount and even if your investment fails, you can always sell them for their quick sell price. However, if your investment pays off, their price will increase and you can sell them on the market when they are required in SBCs. Many SBCs need TOTW cards so you can keep these players in your club or on your transfer list until the right time comes to sell and make a profit.

Which SBCs have the best pack rewards?

During the season, EA Sports releases SBCs for each major league in the game which provide unique untradeable players as well as packs for completing challenges for each club in that league. Some of these packs can be very valuable or rare and even cost more on the market than it costs to complete the club's individual challenge.

Websites like FUTBIN list all the SBCs and how much they cost to complete, which helps when figuring out which challenges provide the best packs at the lowest prices. Similarly, the FIFA subreddit also has threads discussing which clubs to complete to get the best returns.