Struggling to win matches on FIFA 20 or just want to beat your friends and rivals by even more goals? Follow our expert advice to improve your game

FIFA 20 has more than 10 million players worldwide, with each player wanting to be the best and beat the best in the game.

The vast majority of players will never get to the level of esports professionals but everyone can improve their performance on the pitch by following expert advice and spending time working on their game.

Follow our expert advice below to help you become a better FIFA 20 player and help you beat your friends.

Before you start learning five-star skills and perfecting free-kicks, knowing the basics will help turn your losses into draws and your draws into wins. There are some things you need to keep in mind every time you load up the game, such as keeping possession of the ball and learning when not to sprint.

Possession is key to getting results in FIFA 20. Without the ball, you cannot score and the other team can only score when they have the ball. It is pretty simple, but you will often find players try to force attacks or attack too quickly and turn over the ball far too easily. Be patient, look for gaps in the opposition defence and force the opponent to make mistakes or leave areas of the field exposed. Pass the ball backwards when under pressure and do not be afraid to go towards your own goal when there is no clear and safe attacking option.

The vast majority of the time, sprinting is a bad idea. It causes attackers to lose the ball more easily when under pressure and drains stamina far too quickly. You should only sprint when the path is clear e.g. when you have the ball out wide and have already beaten the full-back.

Learn Timed Finishing. A new mechanic added in FIFA 19, Timed Finishing is just as important in FIFA 20. It involves pressing the shoot moment at exactly the right moment and greatly improves the accuracy of your shots. Many of the Skill Games help you perfect Timed Finishing and the practice is definitely worth your time.

Knowing how to take a brilliant free-kick takes lots of time to learn, but it is achievable and can improve your game further. However, it is definitely not a basic tip! Learning how to score from penalties is much more doable for beginners and involves Timed Finishing to get right. Practice this in the Skill Games to get the hang of it.

How to defend on FIFA 20 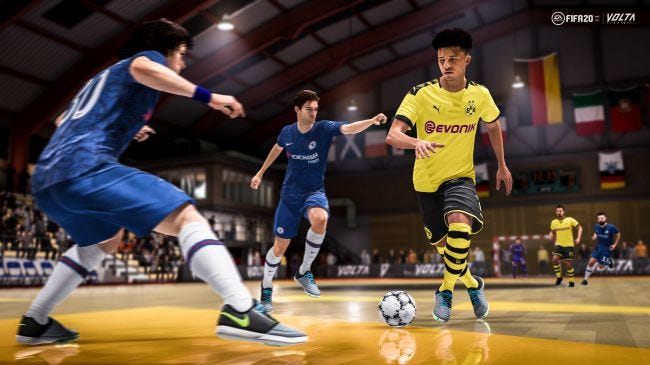 Having the AI automatically defend for you is no longer possible with FIFA 20. Team-mate Contain (R1/RB) used to be a great strategy in previous versions of the game but it will draw players out of position and leave you exposed in FIFA 20. Similarly, Contain (X) still has its uses but provides the opposition with too much space and makes it easy for them to get around you or find a team-mate.

Jockeying (L2/LT) is more effective than Contain, but like anything else that works well in FIFA 20, requires timing and precision. Holding L2/LT and R2/RT together will perform a fast jockey which allows you to keep pace with faster opponents while maintaining pressure.

The Standing Tackle (Circle/B) remains the best way of winning the ball back but needs to be done at the right moment so not to miss the ball and allow the opponent through. Jockeying into position before using the standing tackle or even running directly into an opponent is the ideal way to defend.

Player switching is usually done by pressing L1/LB to target the nearest player to the ball. However, when the game is moving quickly and players are taking up new positions on the field, this can sometimes lead to the wrong player being selected. Instead, learn to switch players by flicking the right stick and you will have better control over your player selection in defence.

Best skills to use on FIFA 20

Two of the simplest and most effective skills in FIFA 20 are the fake shot and the drag back. Almost any player can do these and they are extremely useful when playing someone who lunges in when defending. The fake shot can take the ball in a different direction and give a temporary speed burst while the drag back pulls the ball away from the opponent to give you time to lay it off to someone else or turn away from them.

The fake shot is simple to do, power up a shot and before you kick the ball, cancel it with the pass button. To do a drag back, hold R1/RB and pull the right stick backwards. The fake shot is a one-star move, meaning that even goalkeepers can perform it, while the drag back is available to every player with two-star skills or higher.

You can follow up the drag back with a simple ball roll, another two-star move, which involves pushing the right stick to the side of the direction the player is moving in. This can get you around defenders and even past onrushing goalkeepers in one-on-one situations.

Mastering four- and five-star skill moves can turn you into an expert FIFA 20 player, but requires practice and patience as they will fail when used incorrectly. However, some of the four-star skills are simple to learn, including the heel-to-heel flick where you flick the right stick forwards and then backwards to flick the ball past the opponent and get a short speed burst.

The five-star McGeady spin is also quite straightforward and can be a great asset when running close to defenders down the wing. To do it, flick the right stick forwards and then to either side to do a little 90 degree spin and come out with the ball facing towards goal and inside the defender.

Best tactics and formations on FIFA 20

The best formation on FIFA 20 is the one that fits your playing style and your chosen team best. There is no point in playing three-at-the-back if you only have two great centre-backs and a 4-3-3 is useless without the right wingers.

Choose a formation that works for you and stick with it if it is working. Chopping and changing formations too often will lead to poor decision-making when in possession as players will not be where you expect them to be.

Instead of tweaking your formation, alter your custom tactics to fit the way you want to play. Like counter-attacking and crossing into the area? Change the Offensive Style to Fast Build Up. Find yourself getting exposed at the back by fast forwards? Lower the Defensive Depth setting.

You should also create varied custom tactics so that changing to Defensive or Ultra Defensive by pushing the D-Pad to the left actually causes your defenders to drop deeper and not press as high up the pitch, helping you hold a lead. Similarly, the two Attacking options should adjust the offensive depth and pressing intensity accordingly and even increase the numbers of players in the box for crosses.