Veterans of the game will be fully aware of the various chips, but beginners and those relatively new might scratch their heads in wonder

Online fantasy football has grown ever so slightly more sophisticated over the years, with the makers of the official Premier League game adding accoutrements here and there.

The wildcard is something that was introduced a number of years ago and it has helped to make the game more interesting, providing a mulligan, so to speak, for embattled fantasy managers.

Recently, the masterminds behind the online game have brought in the free hit, which is similar in essence to the wildcard, but different.

So what are they, exactly? Goal takes a look at the wildcard in FPL and how it all works.

What is a wildcard in fantasy football?

In fantasy football, a wildcard is something that facilitates unlimited transfers without incurring penalties.

Ordinarily, in the official Fantasy Premier League game, users are given one free transfer a week (which rolls over only once) and each subsequent transfer incurs a penalty of minus four points. For example, if you have one free transfer available and make three transfers in a single gameweek, you will have eight points subtracted from your score.

However, the wildcard (sometimes known as 'wildcard chip') allows fantasy football players to totally alter the make-up of their squad free from the impact of a crippling points deduction.

When can I use the wildcard?

You can use the wildcard whenever you want, but it can only be used twice during the course of the season, so it is wise to carefully consider the timing.

In order to use the wildcard you must first make your transfers. When confirming the transfers, the option to play wildcard will appear and it should be selected in order for the free transfers to take effect.

Once the wildcard has been confirmed, it cannot be cancelled, so exercise plenty of caution! 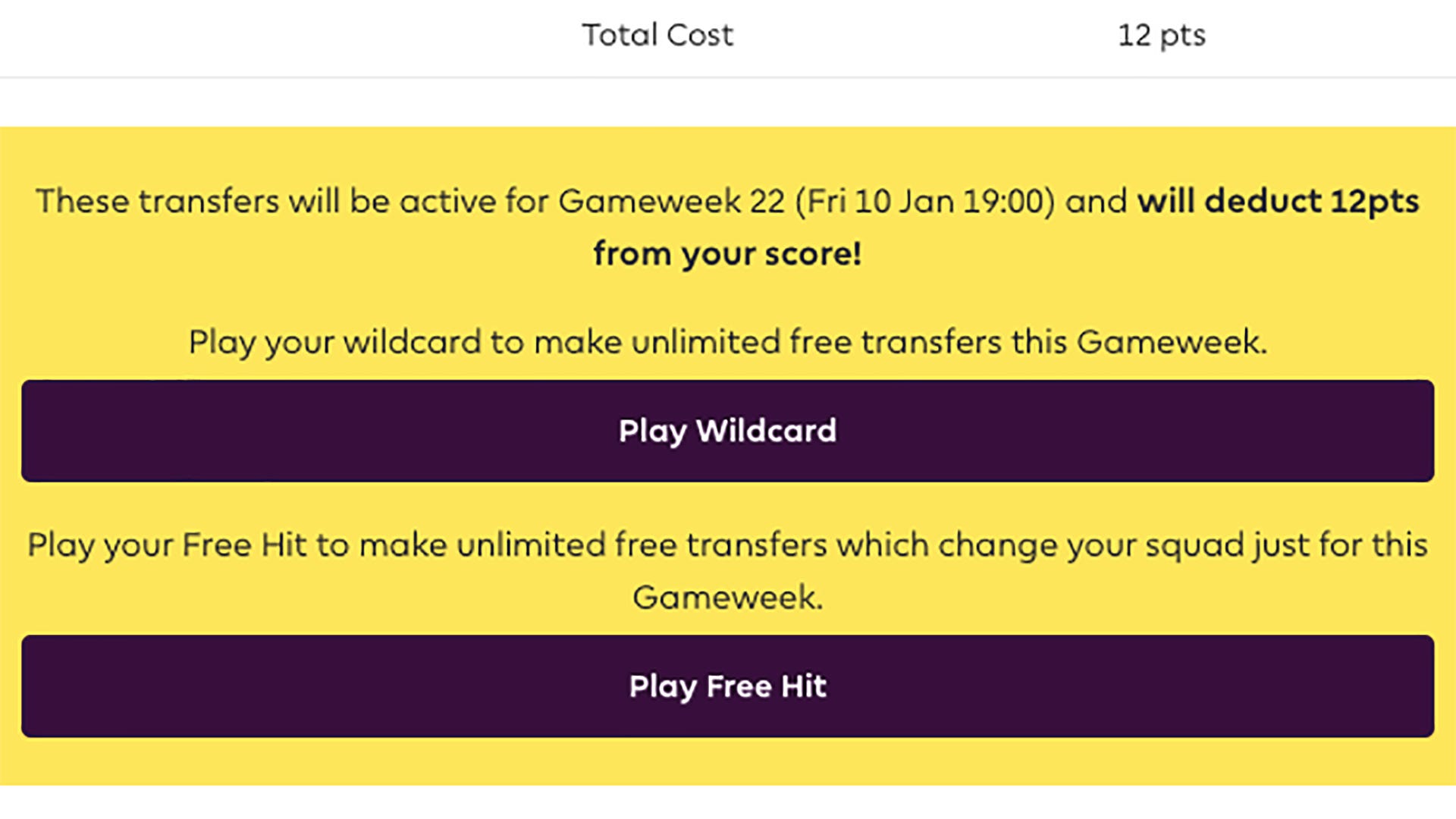 When should you use a wildcard?

The wildcard is particularly useful during an injury crisis, if a number of your players are out of action and unable to score points as a result.

It is also convenient to have in the event that the initial squad you picked is not good enough or not scoring as many points as you'd hoped. Sometimes your team will begin the season very well and then lose form, at which point it can be expedient to deploy the wildcard.

Certain points of the season are usually better than others. After international breaks, for example, players can occasionally return to their clubs injured or burnt out, while the January transfer window could see new stars arrive to the league.

What is a free hit in fantasy football?

A free hit in fantasy football parlance is a chip or move available to players which allows unlimited free transfers for a single gameweek.

It is similar to the wildcard, but the transfers only remain in effect for one gameweek. The following gameweek, a player's squad returns to how it was before the free hit.

Unlike the wildcard, a free hit can only be used once in a season. 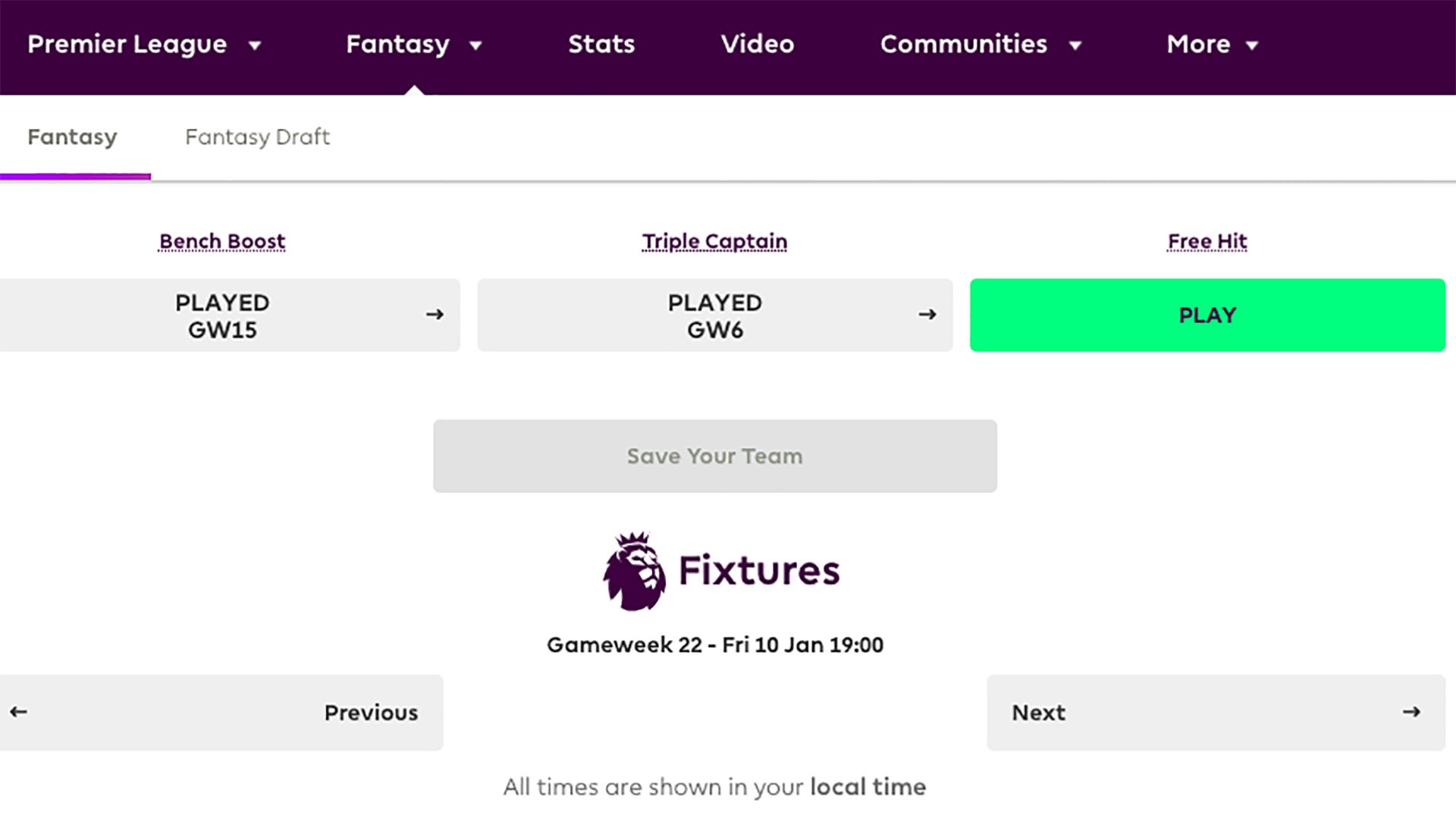 So when should you cash in the free hit chip?

Essentially, the principle of the free hit is the same as the wildcard, so it should be used under similar circumstances.

However, it is probably best suited to periods when your squad - more particularly your high scorers - has been riven with injuries and/or suspensions.