Albin Ekdal has fond memories of Giorgio Chiellini from his short stint at Juventus. "He drove me to training when I didn't have a driving licence," the Sweden midfielder revealed ahead of last week's clash with Italy. "On the pitch, he can be a swine, though. He knows that himself but then, everyone wants a player like that." Italy have three of them - playing in the same defence.

Chiellini, Andrea Barzagli and Leonardo Bonucci form the best backline in world football. Last week, the front page of the Gazzetta dello Sport was adorned with an image of the trio mocked up as characters from the Quentin Tarantino film 'Inglourious Basterds'. It was easy to understand why: Barzagli, Bonucci and Chiellini take no prisoners; they are three warriors who are as brilliant as they are brutal - and they are the reason why Italy are quietly confident of upsetting Spain in the last 16 of Euro 2016.

The Azzurri arrived in France with one of their most underwhelming squads in recent history. Their midfield had been significantly weakened by the injury-enforced absences of Marco Verratti and Claudio Marchisio, while there is not a single world-class striker in the attack. However, there were no doubts over the strength of their defence.

Barzagli, Bonucci and Chiellini have been playing together at Juventus since 2011 - and it is all down to current Italy boss Antonio Conte, who is now effectively reaping what he himself sowed. It was the Chelsea-bound coach who promptly decided that he would be better served by ditching his plans to play a flat back four in Turin and instead play the trio together. The results were spectacular, with Barzagli, Bonucci and Chiellini forming the backbone of a side that would win three successive Scudetti under Conte - and a further two under current coach Massimiliano Allegri. 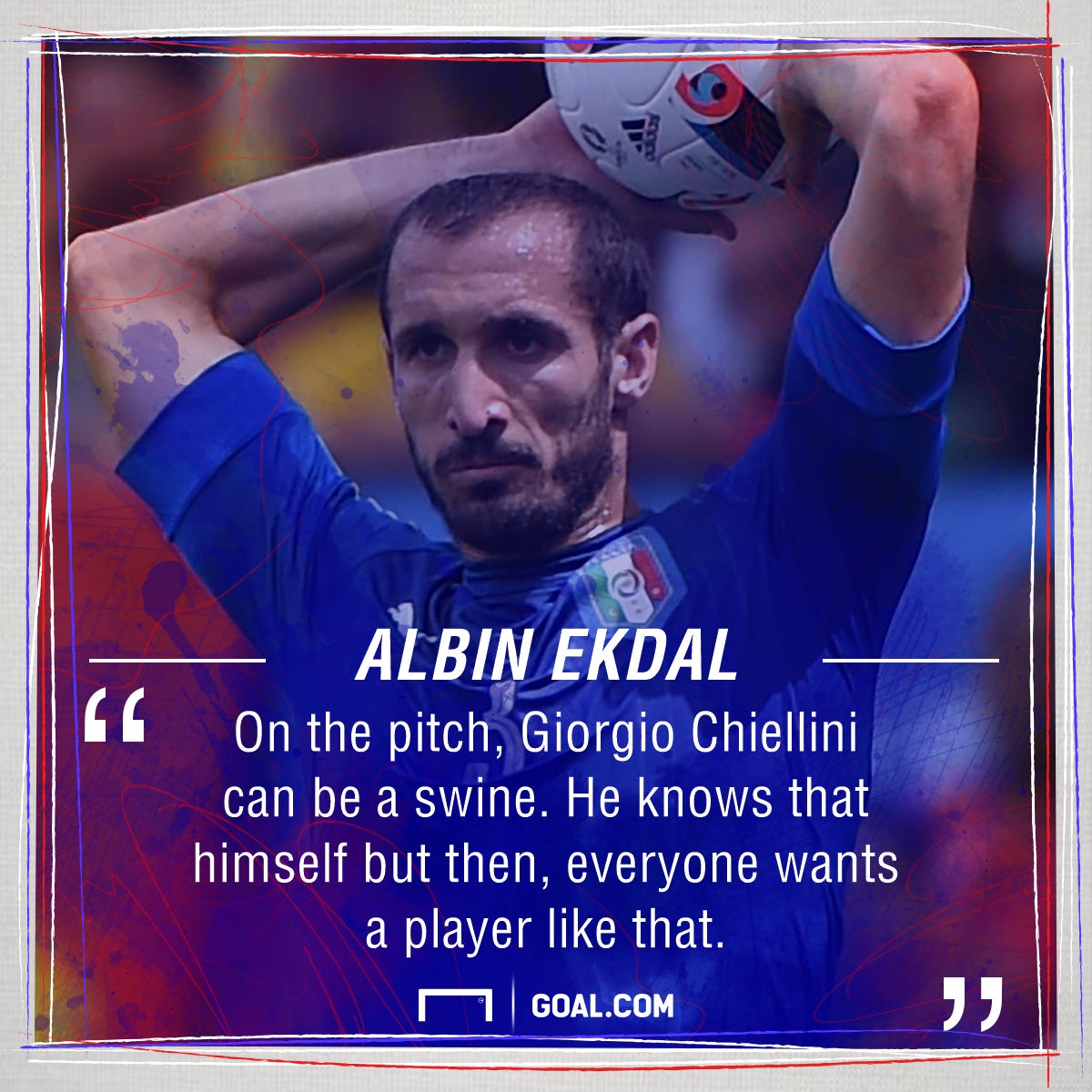 They have now played 94 games alongside one another at Juve, racking up 63 wins, 20 draws and just 11 defeats, with the Bianconeri keeping clean sheets in more than half of those outings (51 matches).

As Bonucci said recently, the three now know one another to "perfection". "Andrea and Giorgio are two great champions," the 29-year-old enthuses. "They know how to be very aggressive when playing with a three-man defence, while my role is to cover their backs when they press up high on forwards. They are two bulldogs and easily among the best defenders in the world."

Indeed, Barzagli and Chiellini allow Bonucci to serve as an extra playmaker for both club and country. The Viterbo native has wonderful vision and fantastic technique for a centre-half, as he so impressively illustrated with his Andrea Pirlo-like pass for Emanuele Giaccherini's opener against Belgium on matchday one.

Spain coach Vicente Del Bosque has, unsurprisingly, insisted ahead of Monday's showdown in Saint Denis that the defending champions are not worried by the prospect of trying to break down Italy. However, Alvaro Morata's thoughts on facing his ex-Juventus team-mates were telling. 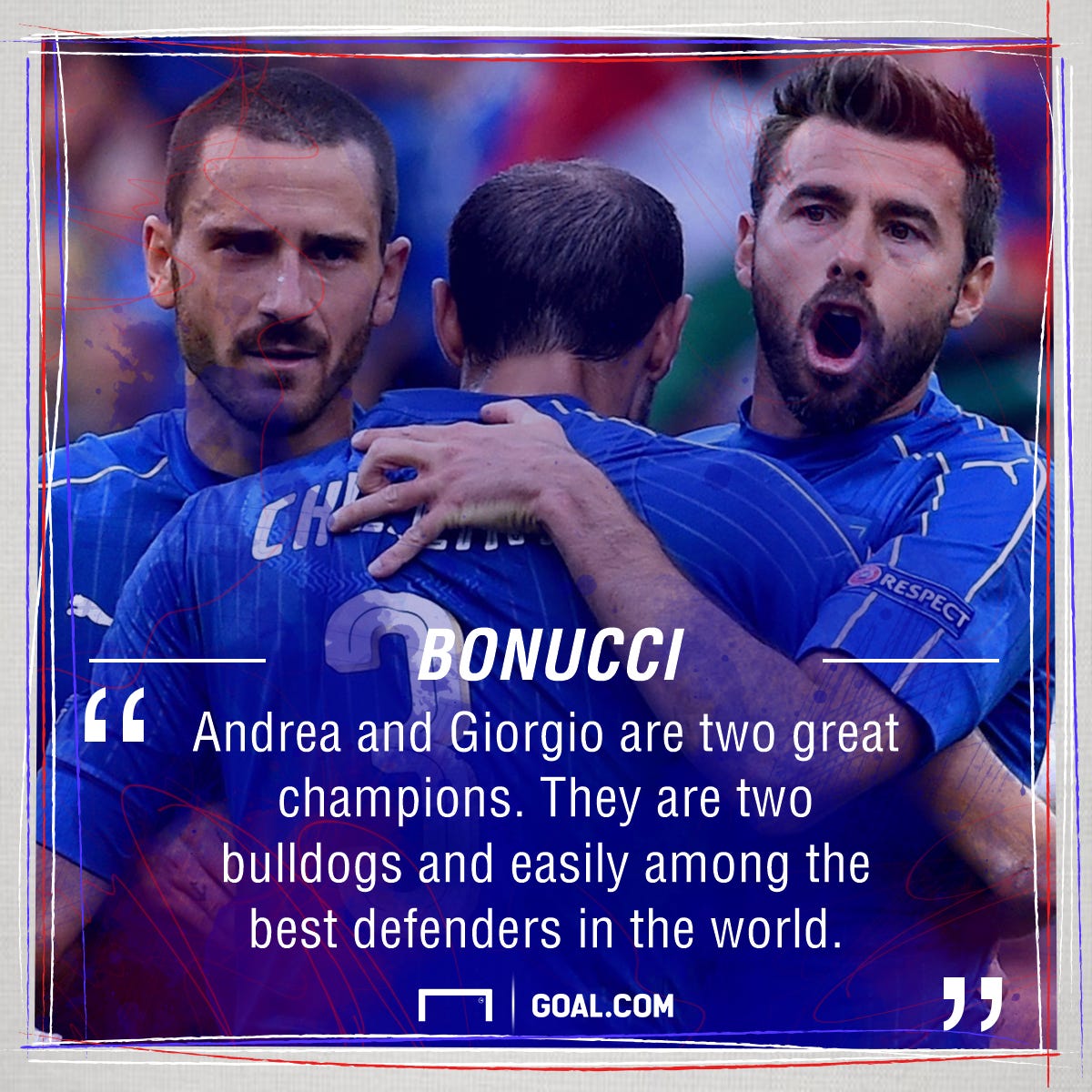 The striker, who is returning to the Santiago Bernabeu after two years in Turin, has previously played alongside Real Madrid's much vaunted attack of Gareth Bale, Karim Benzema and Cristiano Ronaldo but he has just as much respect for Italy's answer to the 'BBC'. "Bonucci is a leader, Chiellini has the strength and Barzagli the quality," Morata explained on the eve of the last-16 clash. "Scoring against my former team-mates is almost impossible."

Chiellini has had plenty of kind words for Morata in the build-up, even admitting: "I hope he can stay at Real Madrid, as that's his dream, since he played in their youth team. With his skills and personality he deserves to be Real Madrid's and Spain's centre-forward for years to come."

However, the 31-year-old was the first to admit that he and his fellow members of the Azzurri's BBC won't be affording their former colleague any preferential treatment.

"He's a good guy and we have great memories of him in Turin," Chiellini said, before omonious adding, "But while we respect him, when you play you have to leave friendship aside..."

Morata, like Ekdal before him, knows only too well that when it comes to Barzagli, Bonucci and Chiellini, they only offer free rides off the pitch - never on it.