They are a source of discussion and argument every single season, but how do EA Sports create the overall scores for every player in the game?

Each year, with the launch of every new FIFA game, EA Sports releases the top 100 ratings for the best players in the game, as well as the complete database of ratings for every single player from all the licensed leagues.

The top 100 list always provides for plenty of debate from fans, with FIFA 20 rating Lionel Messi as 94 overall and Cristiano Ronaldo at 93, leading to a lot of social media arguments between fans of both players.

Everyone has an opinion on the best players in the game and whether certain stars are under, or overrated, but how do EA Sports decide the ratings for all the lesser-known players in their database? How do they decide whether Port Vale's left-back has 50 or 53 dribbling?

EA Sports employs a team of 25 EA Producers and 400 outside data contributors, who are led by Head of Data Collection & Licensing Michael Mueller-Moehring. This team is responsible for ensuring all player data is up to date, while a community of over 6,000 FIFA Data Reviewers or Talent Scouts from all over the world are constantly providing suggestions and alterations to the database.

It is a complicated process but its vast scope ensures that the information in the game itself is as accurate as possible, down to the weak-foot strength of lower league players and teenage reserves from minor leagues.

What are FIFA Talent Scouts?

It would be impossible for EA Sports' staff to watch every single player in every single game, so a team of over 6,000 volunteers help maintain and update the player database all year round. These FIFA Data Reviewers are known as FIFA Talent Scouts and are coaches, scouts and football fans whose local knowledge helps maintain accuracy and ensure there are no major inconsistencies in each version of FIFA.

All the data is overseen by Mueller-Moehring's team of EA Producers and has to be backed up and verified before even a minor change is made. Each player in the game has over 300 fields as well as over 35 specific attributes which ultimately determine the rating seen in the game.

"We have many leagues in the game; no stats provider could offer us data for all these leagues, teams and players," Mueller-Moehring told ESPN. "This is also the reason why we use this online database, because it's not possible to buy this data some way - it just doesn't exist."

How can I become a FIFA Data Reviewer?

As it is a voluntary position, some Data Reviewers offer suggestions for the database on a regular basis, while others may only log in a few times a year to make changes. Data Reviewers are not able to change the overall ratings of players based on matchday form, ensuring Messi doesn't become a 74-rated forward if he has an off-day for Barcelona or Argentina.

If you're passionate about @EFL football and any of the 72 clubs as well as @EASPORTSFIFA and would like to get involved, you can apply for a Data Reviewer position through our Talent Scout website: https://t.co/XvU2c4HBvG #FIFA19 #EFL

The application process is straight-forward, asking for details about which clubs you wish to review as well as looking for suggested changes you would implement to improve the accuracy of the database.

As well as assessing the player data across 300 fields, Data Reviewers are also responsible for ensuring "the players’ real life match appearance is replicated as accurately as possible in EA SPORTS FIFA – by reviewing their boots, face/hair and body types." 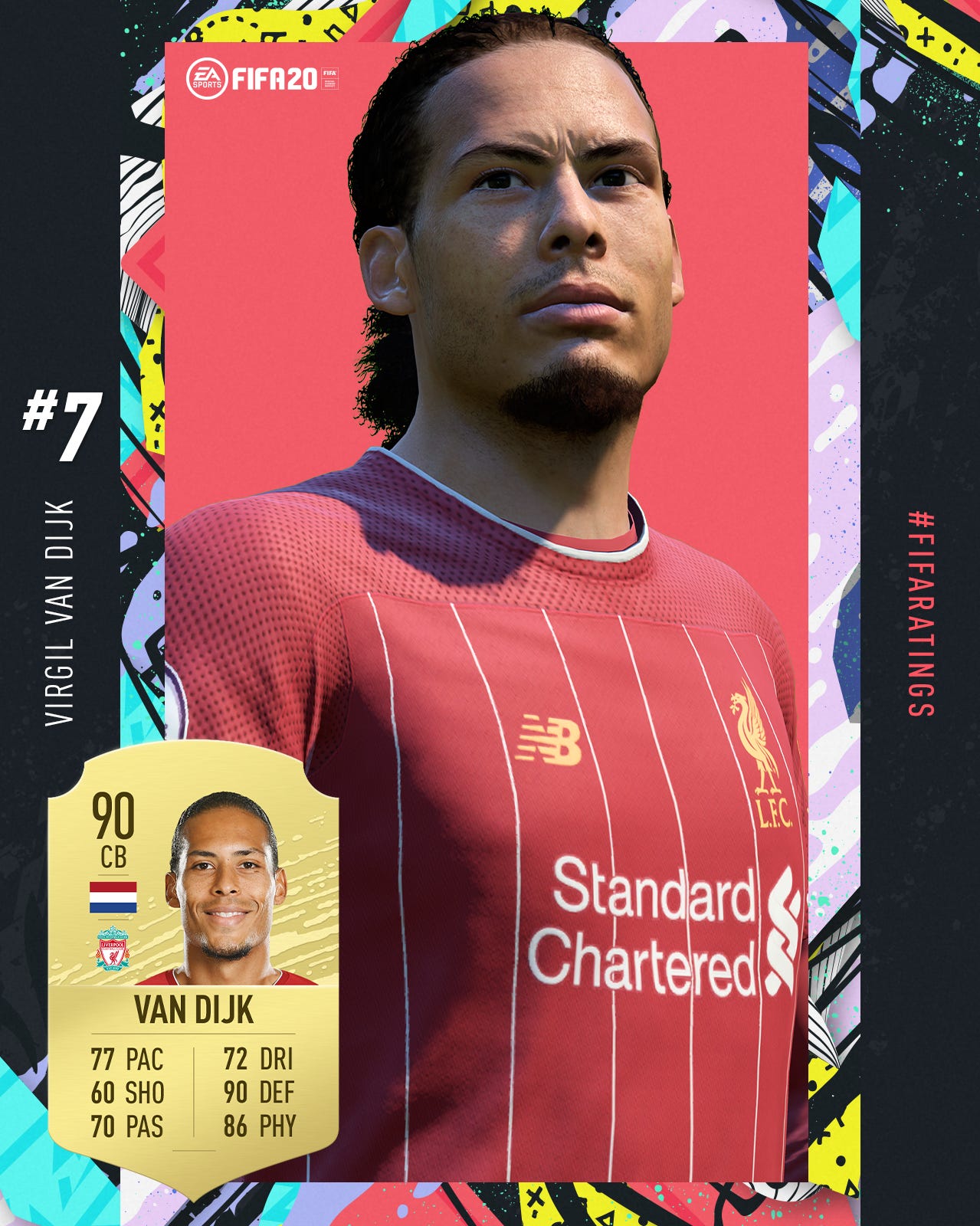 How are the card ratings calculated in FIFA Ultimate Team?

Each player in FIFA Ultimate Team has an overall rating as well as six scores for the key stats; Pace, Shooting, Passing, Dribbling, Defending, and Physical. These stats are combined with a player's international recognition to calculate the player's overall rating. This ensures that players who are both fast and strong but play in weaker leagues do not find their overall score skewed compared to slower, weaker but ultimately more talented players at a higher level.

"If Messi were playing in the Irish league, his attributes would drop simply because he's not on the highest level anymore," Mueller-Moehring told ESPN. "We want to base our ratings on actual performance data. When it comes to physical attributes, though, no such guidelines exist. There are fast and strong players in every professional league in the world."

Therefore, these players will still be strong and fast in the game, but will have an overall score relative to their current playing level. Harry Kane's FIFA 13 card was 67 overall while he was on loan at Leicester, but he is one of the top 100 players in FIFA 20 with an 89 rating.

The overall card rating of each player is also determined based on their in-game position. Therefore, a centre-back with good finishing does not get an advantage over a more defensive-minded player who is better in that position. Certain statistics are also given "Positional Coefficients" which are multiplied and added to assign an overall score.

Using Virgil van Dijk's FIFA 20 in-game scores, we can use the Positional Coefficients for centre-backs to see exactly how his overall rating of 90 was calculated:

The overall total from multiplying the Positional Coefficients for Van Dijk is 87.66 which is then rounded up to 88. Once this score is calculated, a player's international reputation is used to determine the final overall score.

Players with one or two-star international reputations do not get boosts to their ratings, but three-star players will receive +1 overall if they are already rated 51 or higher. At four-stars, this becomes +1 between 36 and 66 overall and +2 for 67-99. Five-star players get boosts of +1 for 24-49, +2 for 50-74 and +3 for 75-99. Van Dijk's four-star international reputation adds +2 onto his existing 88 score to give him 90 overall, which is the score on his card in FIFA Ultimate Team.

Why do some players perform better than their rating?

As shown above, Van Dijk's overall rating of 90 is determined by just 11 of the 29 visible stats in FIFA 20 (you can see all these stats on the Player Bio in Ultimate Team), which in turn are assigned from the 300 fields populated by the FIFA Talent Scouts.

Therefore, all the other stats that Van Dijk has in the game do not have any effect on his overall card rating. These include things that can be crucial in the game like sprint speed and acceleration, displayed overall as the Pace stat on the Ultimate Team card.

A great example of this is Real Madrid central midfielder Toni Kroos. He has an 88-rated card in FIFA 20, but a pace stat of just 45 thanks to an acceleration score of 50 and a sprint speed of 41. Atletico Madrid's Saul has an overall score of 85, a good three points lower than Kroos, but will be much more popular and probably much more useful in FIFA Ultimate Team as all his six-key stats average out as 70 or better.

Saul's card indicates he is quicker, stronger and better at tackling than Kroos, while also having the same dribbling score.

A player's international reputation will also skew the overall rating. As shown in the Van Dijk example above, this number has no effect whatsoever on the player's individual statistics and is used only to calculate the final figure on the card.

How often are FIFA ratings updated?

FIFA Data Reviewers and Data Editors are always making suggestions and changes to the game's database. These will often be minor changes such as weak-foot star tweaks, physical updates such as hairstyle, height, weight, etc. but also there's the potential for a player's in-game statistics to change during the season.

FIFA Ultimate Team gives players upgrades during Team of the Week following stand-out performances and then has an overall ratings refresh in January and February of each year, where overall player ratings are even boosted if a player had a good first-half of a season.

However, the rest of the game's database is updated much more regularly in order to reflect real-world performances. This can happen many times each month and requires a small download to the game when playing Career Mode or Online Seasons.