The former Manchester United and Real Madrid star is famous for his tattoos, but where are they, and what do they represent?

David Beckham has always been one to express himself through his personal appearance.

We've seen the former Manchester United, Real Madrid and England midfielder sport a string of different hairstyles over the years, display questionable outfits, and dabble with the length of his facial hair.

What he has also come to be known for, away from the football pitch, is the number of tattoos which he has sprawled across his body. But where are they and what do they represent? GOAL takes a look.

Possibly the most famous of the former England captain's body ink is on the back of his neck; a Gothic-style outline of a cross with wings, placed above the name of his son, Romeo. 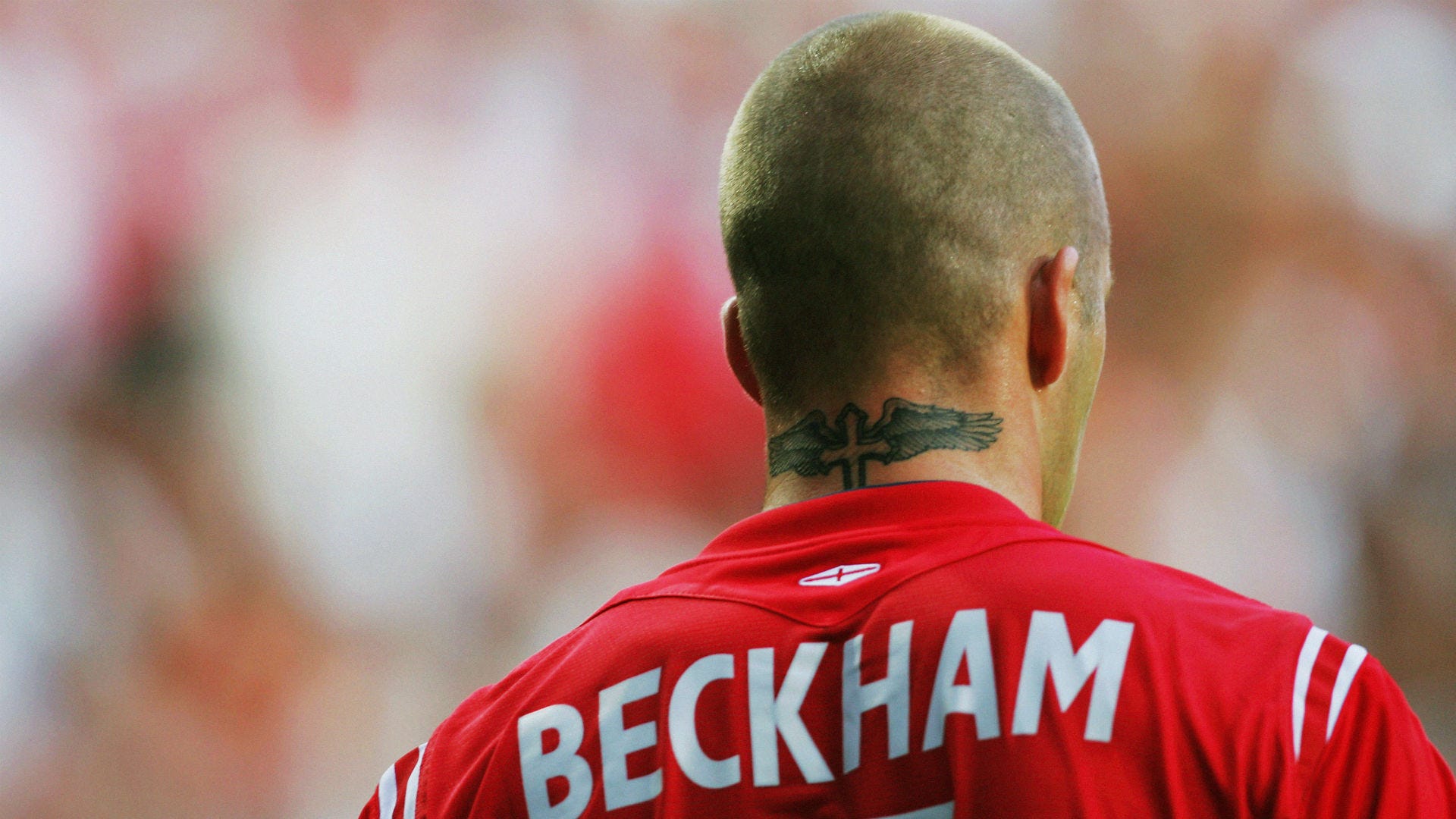 Beckham also has the name of his daughter, Harper, tattooed on his neck, to which he later added the words 'Pretty Lady' on her fourth birthday.

The former Man Utd and Real Madrid midfielder has dedicated a fair amount of his body to tributes to his children, with the words 'Dadda', and 'Buster', a piece to celebrate his relationship with his eldest son, Brooklyn, on his neck.

Above the aforementioned 'Pretty Lady' tattoo on the left of his neck, Beckham now has a rose, and below 'Buster' on the right he has the head of a horse, a nod to his wife, Victoria.

He also has a flock of birds rising towards his left ear, which has a black heart etched onto it, while there is also a picture of the solar system that is often hidden by his hair.

On Beckham's right shoulder, he has a tattoo of an angel and two cherubs with the words 'In the face of adversity'. This was done a month after former personal assistant Rebecca Loos claimed that she had an affair with the star.

Below the angel is a filler of clouds, with another angel below that. Beckham also has the words 'Let them hate as long as they fear' written on his arm, a quote synonymous with former Roman emporer Caligula.

On the same arm are the words 'Pray for me', while he has a hummingbird and the name of his wife, Victoria, on his wrist. 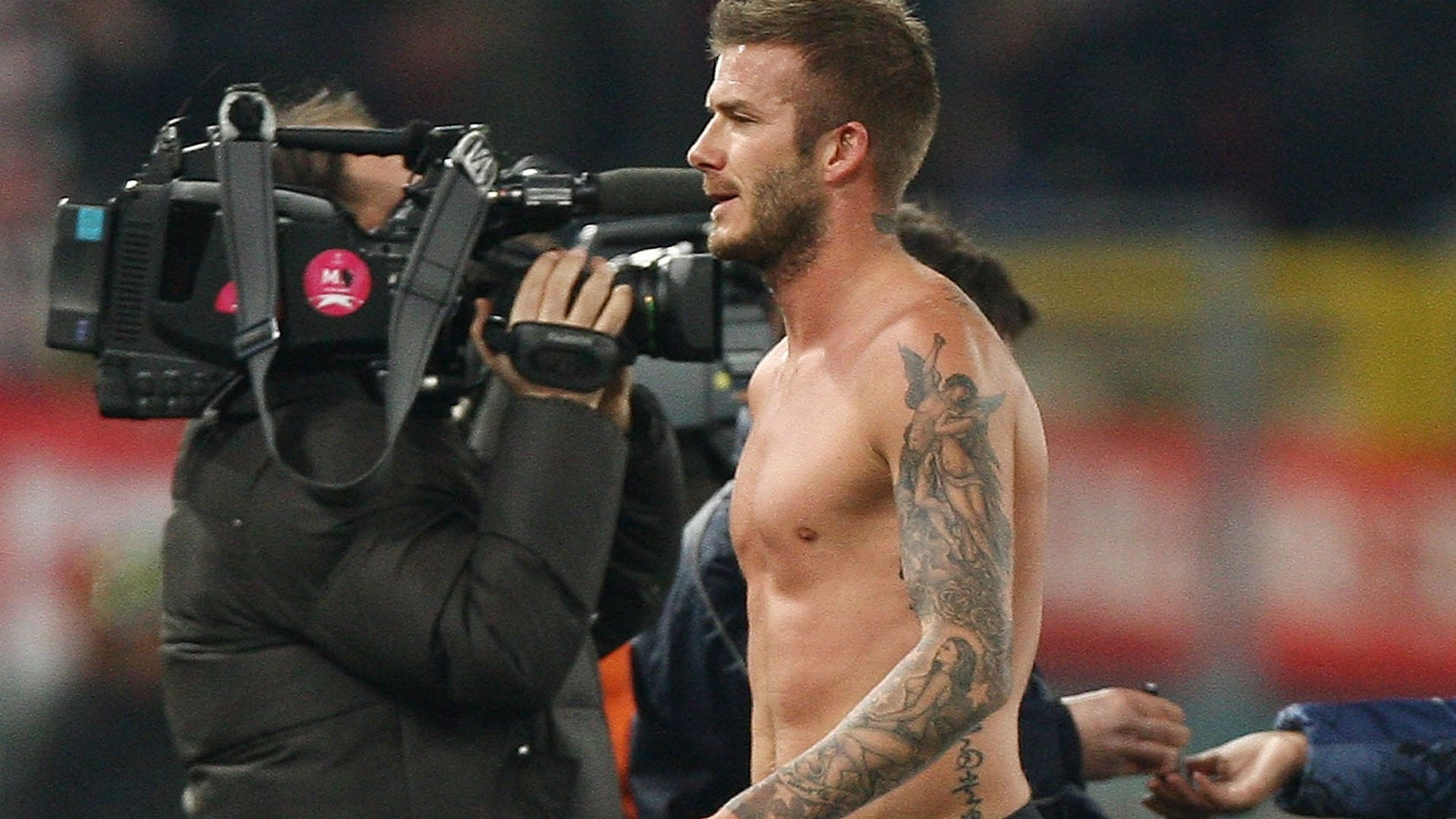 On the opposite side, Beckham has a piece inspired by Cupid and Psyche, based on a 15th century painting by Francesco Francia.

Beckham also has another rose tattoo, this time marking the tenth anniversary with his wife, Victoria, and an image of her lower down.

Another tribute to Victoria comes in the shape of her name along the inside of his forearm, inked in Sanskrit, though it has since been revealed that it actually translates as 'Vihctoria'.

The pair also have Hebrew tattoos, which they got to celebrate their sixth wedding anniversary. These translate as 'I am my beloved’s and my beloved is mine'.

Beckham also has the number seven tattooed in roman numerals on his other forearm, with the Latin phrase 'Ut Amem Et Foveam', which translates to “So That I Love and Cherish.”

On his right wrist he has 'VIII.V.MMVI', a tattoo which represents May 8, 2006 - the date he and Victoria took part in a secret commitment ceremony.

In 2011, Beckham had a large chest-piece added to his collection. He opted for an image of himself as Jesus, with three cherubs representing his sons, Brooklyn, Romeo, and Cruz.

“It’s Jesus being carried by three cherubs and obviously the cherubs are my boys and so my thought of it is that at some point my boys are going to need to look after me and that’s what they’re doing in the picture," Beckham previously said. "It means a lot.”

On the other side there is an image which is a lady immersed in a forest, though the meaning of this piece is unknown.

Beckham has a vertical tattoo down his left side in Chinese symbols, which translates as “Death and life have determined appointments. Riches and honor depend upon heaven.” He also has the year he was born, 1975, a tribute to his mother and father and the words 'We Love You Daddy'.

He has another piece dedicated to his father under his right armpit, a ship at full mast - an identical piece to which his father has tattooed.

Slightly below the ship is another religious piece, a bible script on covering his rib-cage. On the other side, Beckham has an eagle in flight, and the head of an Indian chief.

Beckham also has a black and white representation of Jesus on his way to be crucified based on the famous painting “The Man of Sorrows", as a tribute to his grandfather who passed away in 2010.

Beckham has a number of back tattoos, with the guardian angel between his shoulder blades representing his first piece of body art.

Above the guardian angel tattoo, to which he later had wings added to, is the name of middle son, Romeo. 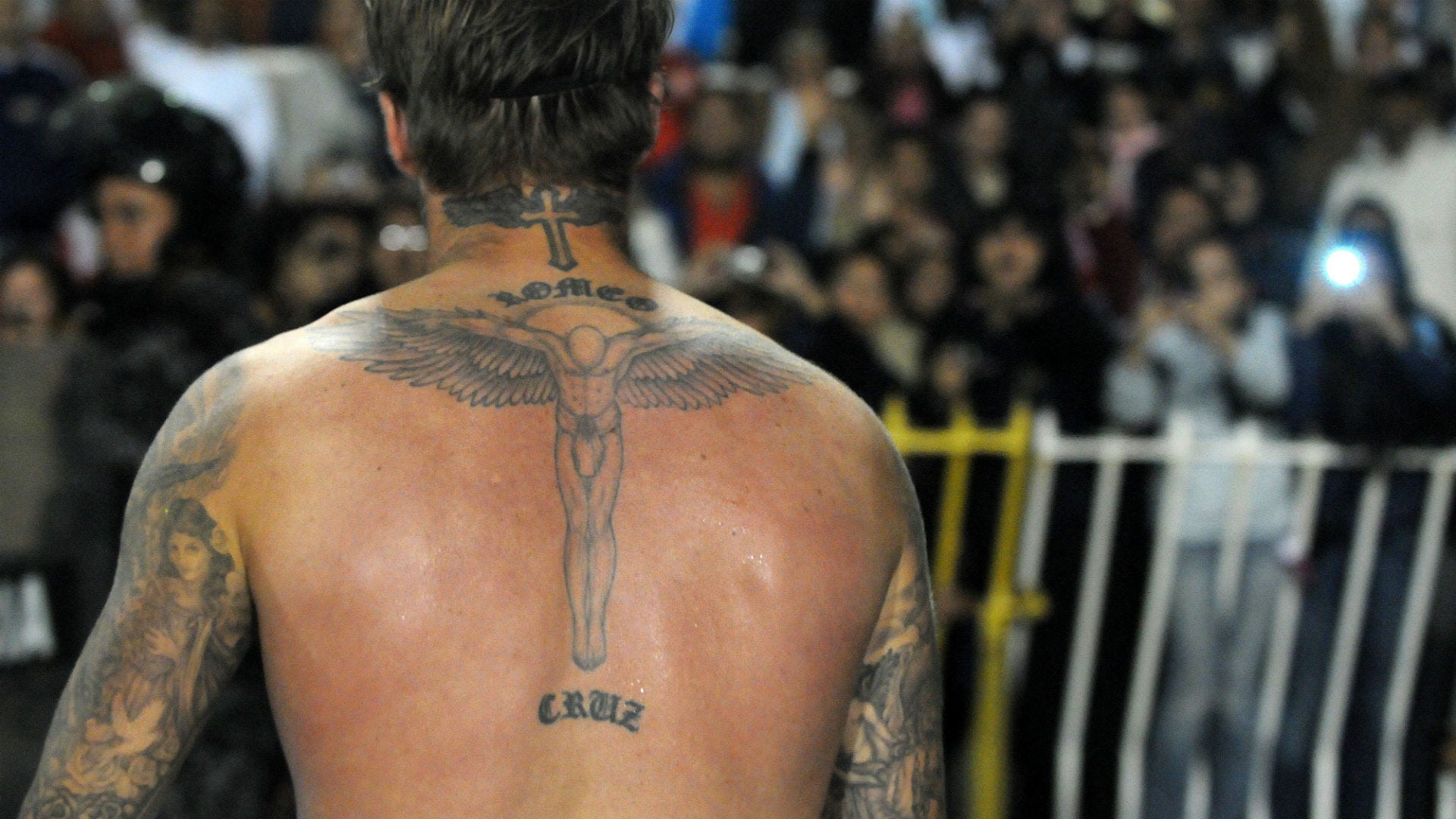 Beckham has the word 'Love' written in large letters across the top of his left hand, with a swallow on either side.

He also has the words 'Lead with love', and the numbers '723', a combination of his famous shirt numbers seven and 23. The word 'seven' figures on his index figure, the number '7' is on his little finger and a rose is inked on his ring finger. 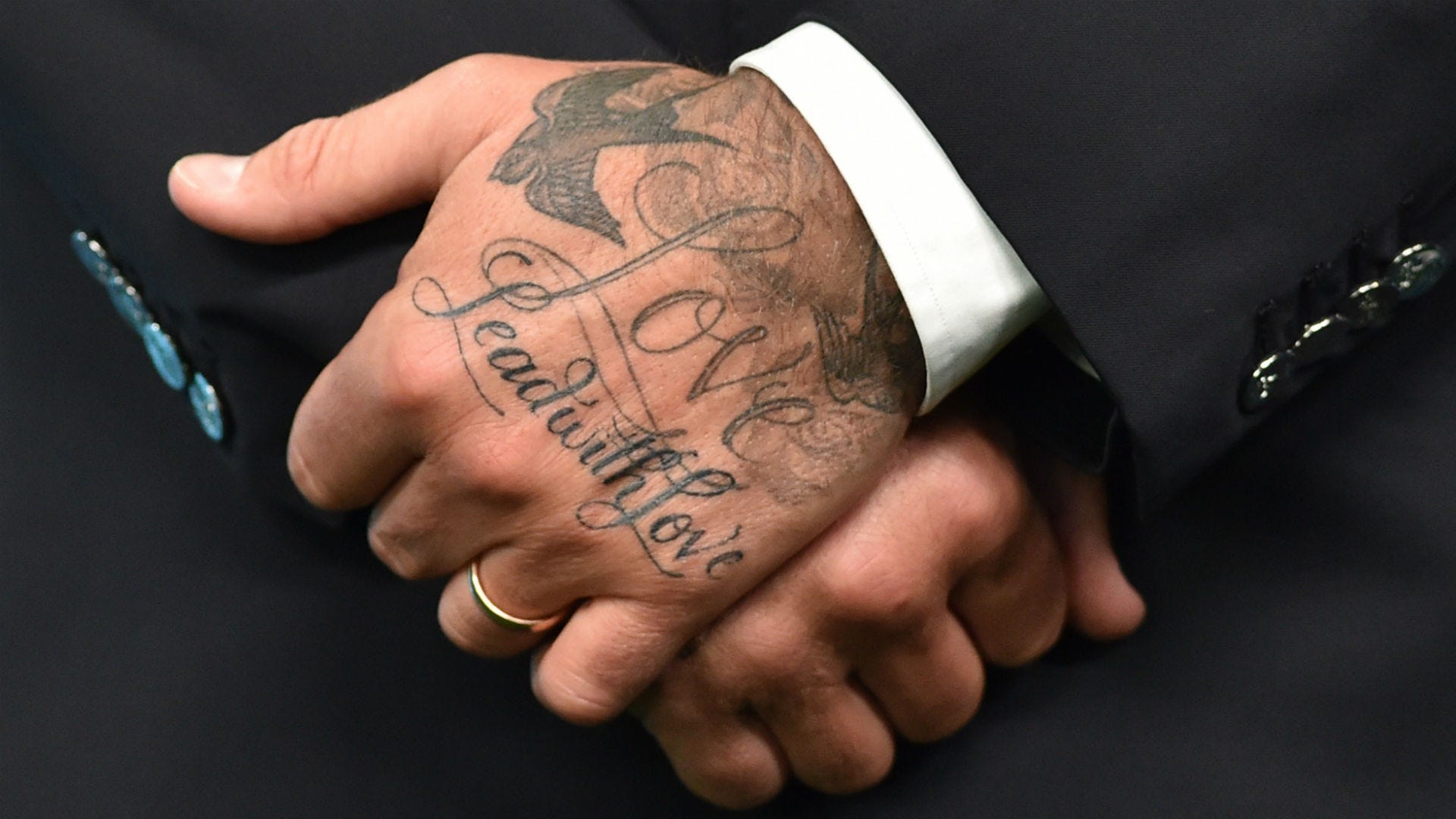 He has a hummingbird on his right hand, along with the name of his wife, Victoria, and the words 'Dream big, be unrealistic'. Beckham also has the number '32', the shirt he wore when on loan at AC Milan.

On his little finger, he has '99' tattooed - the year he married - while he has a small female stick-figure on the inside of his hand, designed by his daughter, Harper.

One of Beckham's newest pieces comes in the shape of two angels on the inside of his leg, stretching across his shin.

Beckham has a large amount of religious-inspired tattoos across his body, with this one a detailed image of a male and female angel wrapped tightly together while running free.

Also on his left leg, the United legend has a lion's face on his quad and a bird on his calf.

How many tattoos does David Beckham have?

At the time of writing, the former England star is believed to have over 60 tattoos, though this number is likely to continue to grow.

Following in his father's footsteps, David's eldest son, Brooklyn, has started to decorate his body.

The 23-year-old, who is a keen photographer and part-time model, has a camera on his arm and the word 'Click' on his shutter finger, as well as a large cupid design on his torso.

Brooklyn also has the words 'Made in England' printed across his foot, a rose across his rib-cage, and a compass on the inside of his arm.

He also has a similar Indian chief tattoo as his dad tattooed onto his forearm, '1975' on his hand, a tribute to his mother on his shoulder, 'buster' over his belly button, and a number of other small prints across his body.

“Thankfully I don’t feel I’ve made any [mistakes] with my tattoos. My son’s started and I’m sure he’ll make mistakes," David said. "But it’s part and parcel of life and being creative. That’s something you can’t stop someone doing, it holds them back.”

Brooklyn has continued to add to his tattoo collection in more recent times, getting 'Lover' across his index finger - in a nod to fiancee Nicola Peltz - along with the message 'Our Little Bubble' on his upper-right hand.

He also has rosary beeds on his hand, words from a love letter penned by Peltz and the phrase 'My life, my love, my truth, my breath, my reason, my beauty, my precious' on his right arm.

Brooklyn's younger brother, Romeo, has taken inspiration from his famous father when it comes to starting his collection.

The 19-year-old, who is forging his own professional football career at Inter Miami II, has had angel wings and a cross inked onto his neck - a design which mirrors David's.

Romeo also has a bird alongside the words 'Lead with love' on his hand.

David's love for body art is obviously shared by his wife, Victoria, as the former Spice Girl has a number of tattoos herself.

She has five stars printed across her lower back, a Hebrew piece running down the back of her neck, and various other pieces on her arms and hands.

Victoria has David's initials on her left wrist, as well as another Hebrew phrase which translates as 'Together, forever, eternally'; a mark of her 10-year marriage anniversary with David.

She has the same VIII-V-MMVI tattoo which David has on her other wrist, and the words “De Integro" next to it.

Who is David Beckham's tattooist?

While a few tattoo artists have worked on Beckham over the years, it is Mark Mahoney of Shamrock Social Club who has been a recent go-to man.

His parlour in Los Angeles has seen some of the biggest names in the world walk through its doors, with Johnny Depp, Lady Gaga and Rihanna all regulars.

“I have a a handful of people who will get tattooed all the time, but not as much as David,” Mahoney told the Daily Star. "He is the only one who doesn’t feel pain. He sits amazing and is the ideal customer. He makes for good conversation at the same time. It’s as if he’s at one with the universe when he’s getting tattooed. He is very tough.”

The majority of Beckham's tattoos have been produced by Louis Malloy, however, one of the most highly-regarded tattoo artists in the UK. Molloy owns a studio in Manchester and was the artist behind Beckham's early body art.

Other artists who have worked on Beckham's body are a tattoo artist named Gabe, owner of Ace Dragon Tattoo in Hong Kong, and LA's Dr. Woo - who is now working on Romeo.