Lyon star Lucas Paqueta will undergo surgery on his finger after an unusual injury.

The Brazil international was reminded that not all childhood games are entirely safe after cutting himself this week.

Paqueta was flying a kite and ended up damaging his finger and is going to require surgery to prevent further issues in the future.

What has Paqueta said?

The 24-year-old revealed the injury in an Instagram Story post, saying: "Remember that children's games also have their consequences. 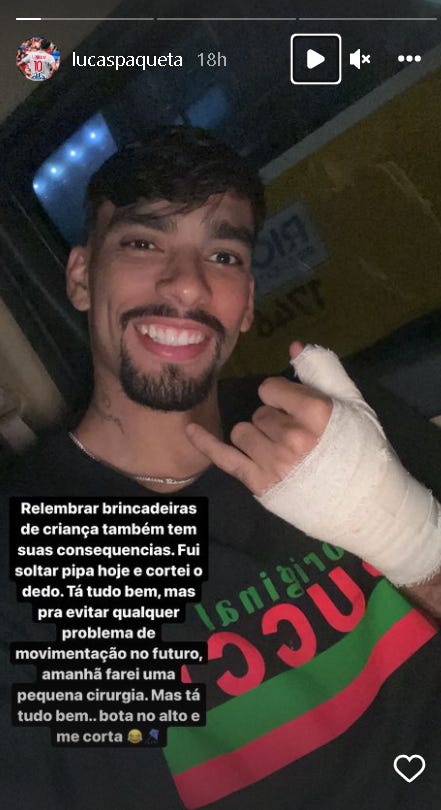 "I went to fly a kite today and cut my finger. Everything is fine, but to avoid any problems with movement in the future, tomorrow I will have a minor surgery."

Paqueta has joined a host of players to suffer a strange injury off the field.

Football players over the years have sustained unusual physical issues in recent years.

Earlier this year, Hartlepool midfielder Mark Shelton was admitted to hospital after he was left feeling disorientated because he pushed a cotton bud too far into his ear.

Hand problems are not uncommong among top-flight stars, either, as Barcelona midfielder Frenkie de Jong had to play a match with a bandage because he had been stung by a bee.

Years prior, ex-Manchester United defender Rio Ferdinand strained tendons in his knee while playing a PlayStation game, while another former Old Trafford star Chris Smalling had to be taken to hospital after being stung by a jellyfish in Indonesia.