The Munich air crash of February 6, 1958 left an indelible mark on the football world. The Busby Babes had given so much to so many that 60 years on the thought of what they could have been remains at the forefront of the minds of Manchester United fans from that era.

Of course, we all know the remarkable story that followed. Manchester United somehow regained its feet against the backdrop of the immense pain, reaching the FA Cup final within three months and going on to win the competition five years later. And then there were the incredible league championships of 1965 and 1967 before the ultimate European glory in 1968 which provided a lasting legacy to Sir Matt Busby’s incomparable reign at Old Trafford.

Busby had already built one squad in his vision prior to the devastating events in Munich which claimed the lives of Duncan Edwards, Eddie Colman, David Pegg, Geoff Bent, Roger Byrne, Mark Jones, Tommy Taylor and Liam Whelan. Survivors Johnny Berry and Jackie Blanchflower never got to be a part of the great Scot’s rebuild either, both of them being forced to retire due to injuries sustained in the crash.

On Wednesday night in Manchester an event entitled ‘Munich 60 years on: How British sport changed’ will discuss the multitude of ways in which United, England and the footballing world were affected by what took place as the team headed back from Belgrade that day.

One of the speakers at the event will be Dr Guy Hodgson, a sports historian at Liverpool John Moores University and lifelong United fan, and he told Goal that there are several household names, including Pele, George Best, Bobby Moore and Nobby Stiles, whose careers were directly and indirectly changed by the Munich tragedy.

“Busby became obsessed with building another set of Busby Babes,” explains Dr Hodgson. “If it had not been for Munich, would he have bought players like Mike England and Alan Ball? Because if you look at the 1968 European Cup side, eight of them are home-grown players as he wanted to get the same home-grown thing again. Would he have changed his mind-set had he been building on success?

“Other things might have happened, like would Nobby Stiles have gone with his brother-in-law Johnny Giles to Leeds, because would he have got a game if Duncan Edwards and Eddie Colman had been around? He might never have got to play for United and might have had to go elsewhere for a position.

“Would United have been so enthusiastic in their search for youth, as they might have missed out on George Best? Wolves were interested in George Best, but United had this passion to go and get these young players and to rebuild the Busby Babes. Would they have had that same urgency and hunger to do it again if they’d won the European Cup and won the championship a few more times?” 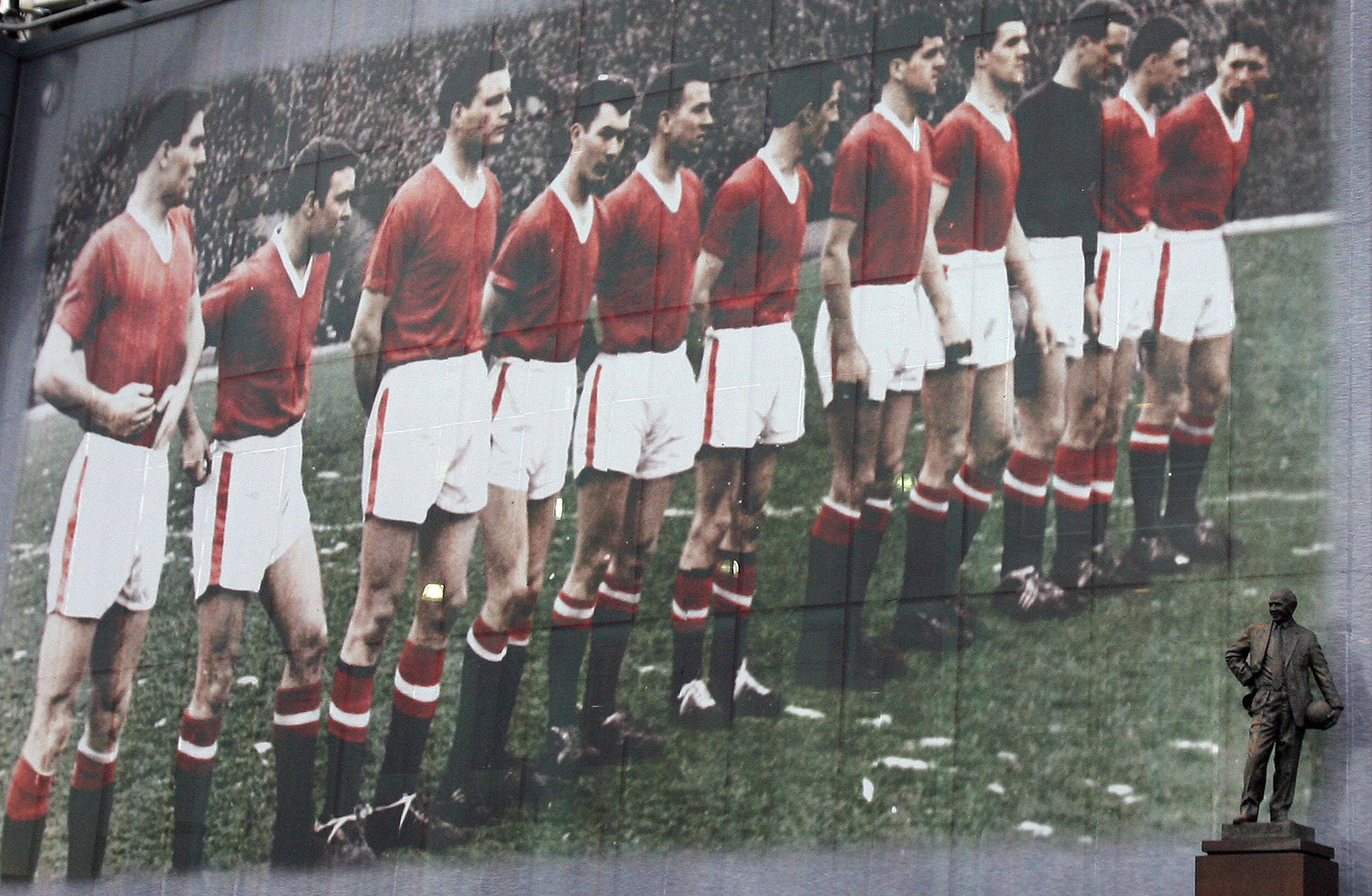 It is not just on a club level that there was a significant knock-on effect either. Edwards, Byrne and Taylor were England regulars until their deaths, stripping the national side of three key players a matter of months before the 1958 World Cup in Sweden which heralded the beginning of the dominance enjoyed by the great Brazil team led by a young Pele.

Dr Hodgson takes up the story: “In ’58 England went there and didn’t lose a game in the actual group stages, they drew with the USSR, Brazil, the eventual winners, and Austria, who had finished third in 1954.

“In that England team they would have had Roger Byrne, Duncan Edwards and Tommy Taylor, also Bobby Charlton went to that World Cup but never played. He was dropped because England had played a friendly against Yugoslavia in Belgrade and he had a bad game. And where had United been flying from at Munich? Belgrade, of course. So Bobby Charlton was probably being haunted by ghosts, had a bad game and didn’t play in the World Cup.

“As it was, Brazil became the first team to win outside their own continent in 1958, but they were lucky because England were severely debilitated and so were the Mighty Magyars of Hungary after Honved’s great side had broken up amid the revolution of 1956.” 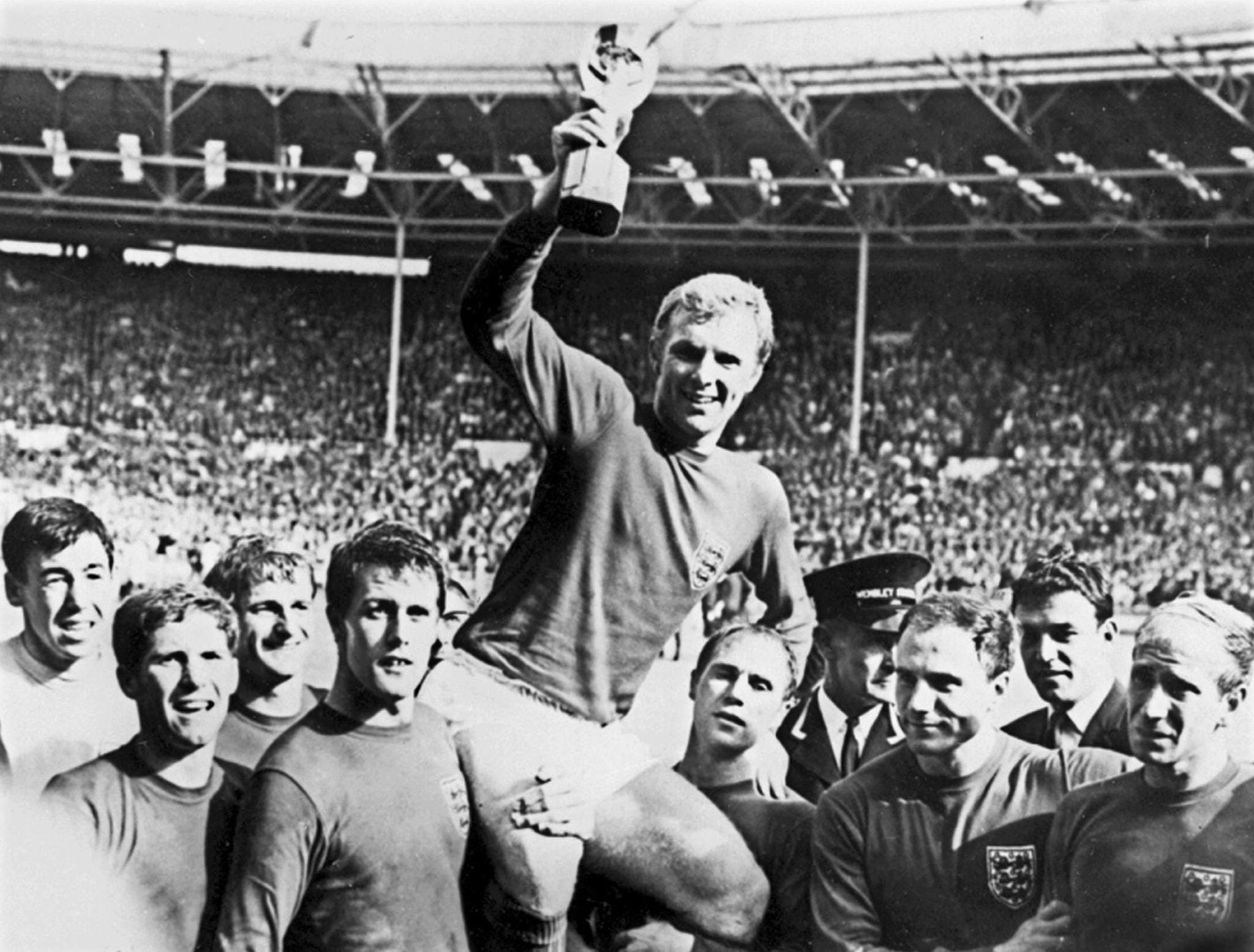 Besides Brazil’s rise to dominance, another world power may have seen their early successes curtailed had the Busby Babes lived on, with the crash coming in the midst of five straight European titles for Real Madrid.

“United would almost certainly have won the European Cup that year, Bobby Charlton thinks they may well have done,” adds Dr Hodgson. “And if you look at the comparative ages of the United squad with Real Madrid at that time I think there’s about a five-year difference, and Real Madrid won in 1958, 1959 and 1960. I think if they hadn’t won it in ’58, United would also have won it in either ’59 or ’60 as they were a young side maturing whereas Real Madrid were slightly over the hill. With that, we would have had a very different perspective of European football and British success because United would have had a couple of European Cups.”

Of course, since the days of Busby and the Holy Trinity of Charlton, Best and Denis Law, United have become a behemoth of the modern game. But the club might not have been what it is today without the incredible response of everybody involved in the weeks and months which followed Munich.

“They became the world’s favourite club because everybody felt sorry for them. That helped propel United’s success, but the fact that they got to the FA Cup final in ’58 itself was astonishing. You had Jimmy Murphy doing a fantastic job, taking over from Busby when he was in hospital and getting them to the FA Cup final with reserves and two players they brought in. They had been given special dispensation by the FA to bring in players who had already been cup-tied to come in and play for United.

“That FA Cup run must have given them real belief going forward because they had managed to do that. But Busby was bold. They signed Denis Law for a world-record fee, which complemented the side. They got David Herd and Pat Crerand. But between winning the league in ’65 and the European Cup in ’68 they signed John Connelly and that’s all. They relied very much on home-grown talent because he was trying to rebuild his Busby Babes. And only five years after Munich they won the FA Cup against Leicester in 1963.” 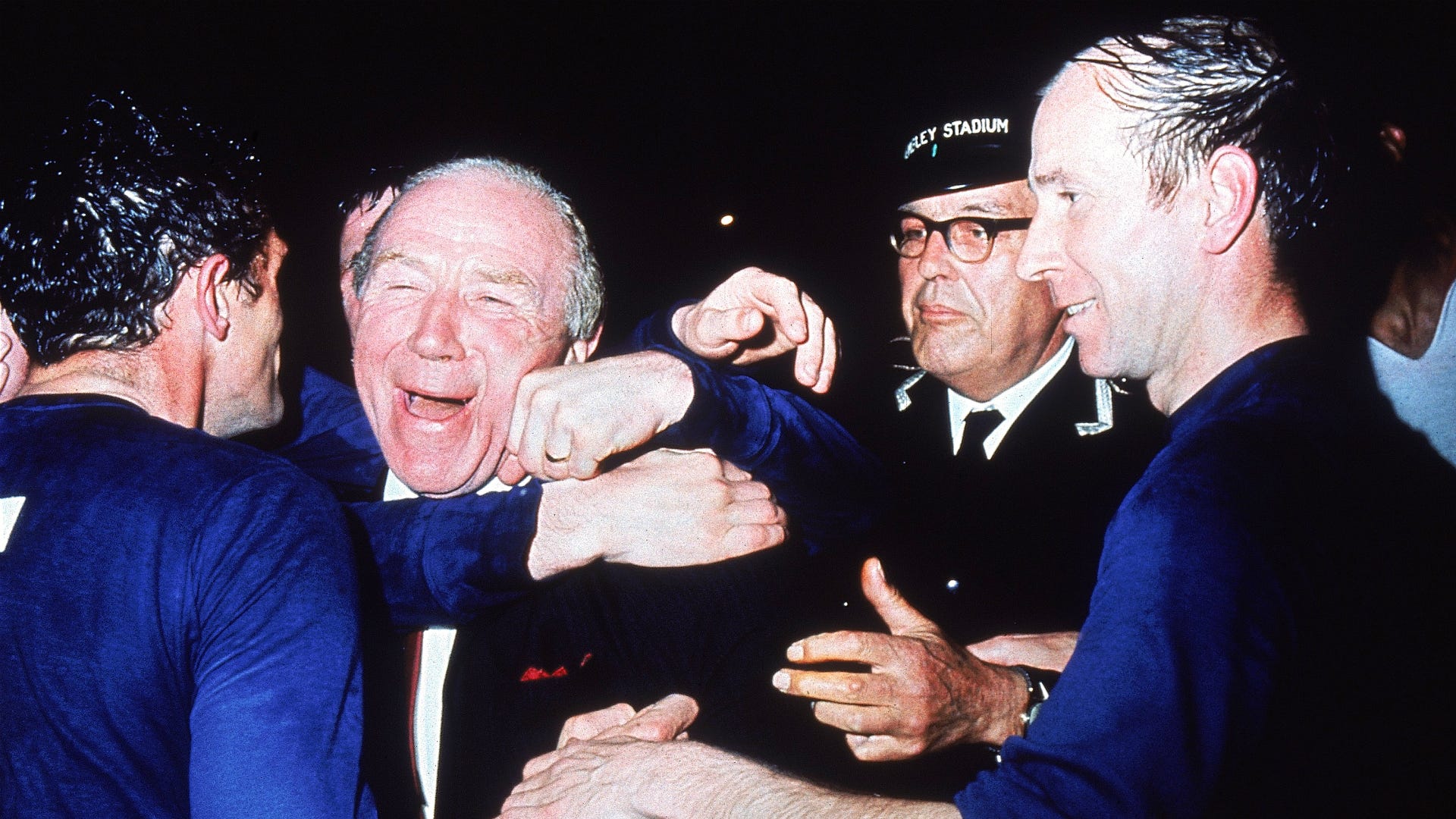 Charlton, of course, would eventually be a winner not just with his club in Europe but also with his country on the biggest stage of all in the 1966 World Cup, just eight years on from the emotional trauma of losing so many of his best friends and team-mates.

And there will forever be the question of what part Edwards might have played in Sir Alf Ramsey’s team had he not lost his life 15 days on from the crash. 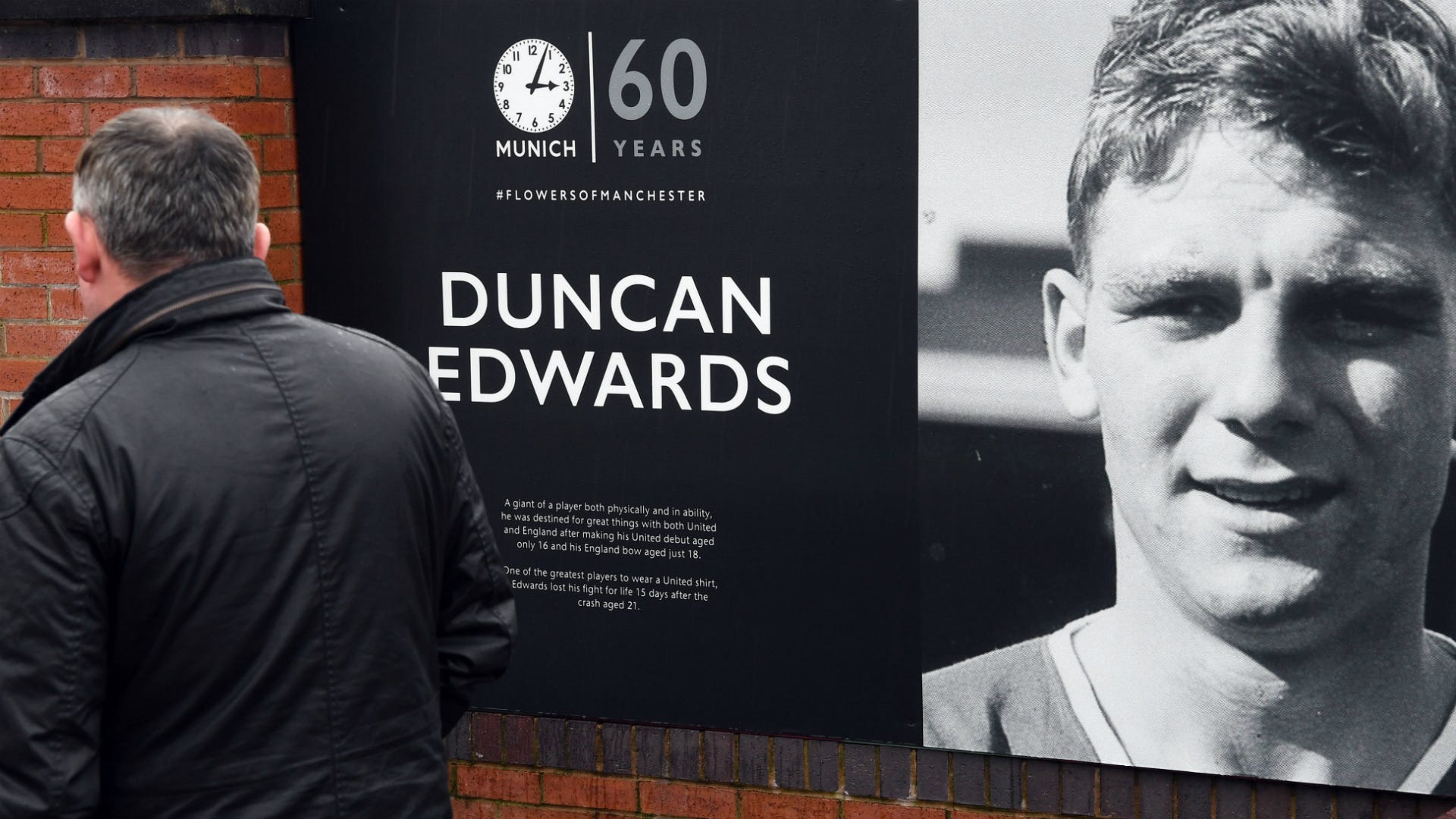 “There might have been a significant improvement in that England side. It was still quite a raw side, and Ramsey had still been chopping and changing his team until quite late, looking for that winning formula.

“I spoke to Jimmy Armfield a couple of times and he described Duncan as a colossus, and he was adamant that he would have been in the ’66 World Cup side. When you think that Bobby Charlton played with players like George Best and against someone like Pele, yet he says Duncan Edwards is the only player that made him feel inferior, he must have been absolutely outstanding.”

Sixty years ago, Manchester United lost the heart of their football team and somehow rose again to become one of the greatest clubs of the modern world. But the sport’s history might have been so different.

Imagine a world in which the all-conquering Real Madrid team of Puskas, Gento and Di Stefano had met their match. Imagine a world in which England were spoken about in the same terms as the greatest of all Brazil sides. That is the world we lost when the Munich tragedy robbed 23 people of their lives, and Manchester United and England of their most treasured of teams.