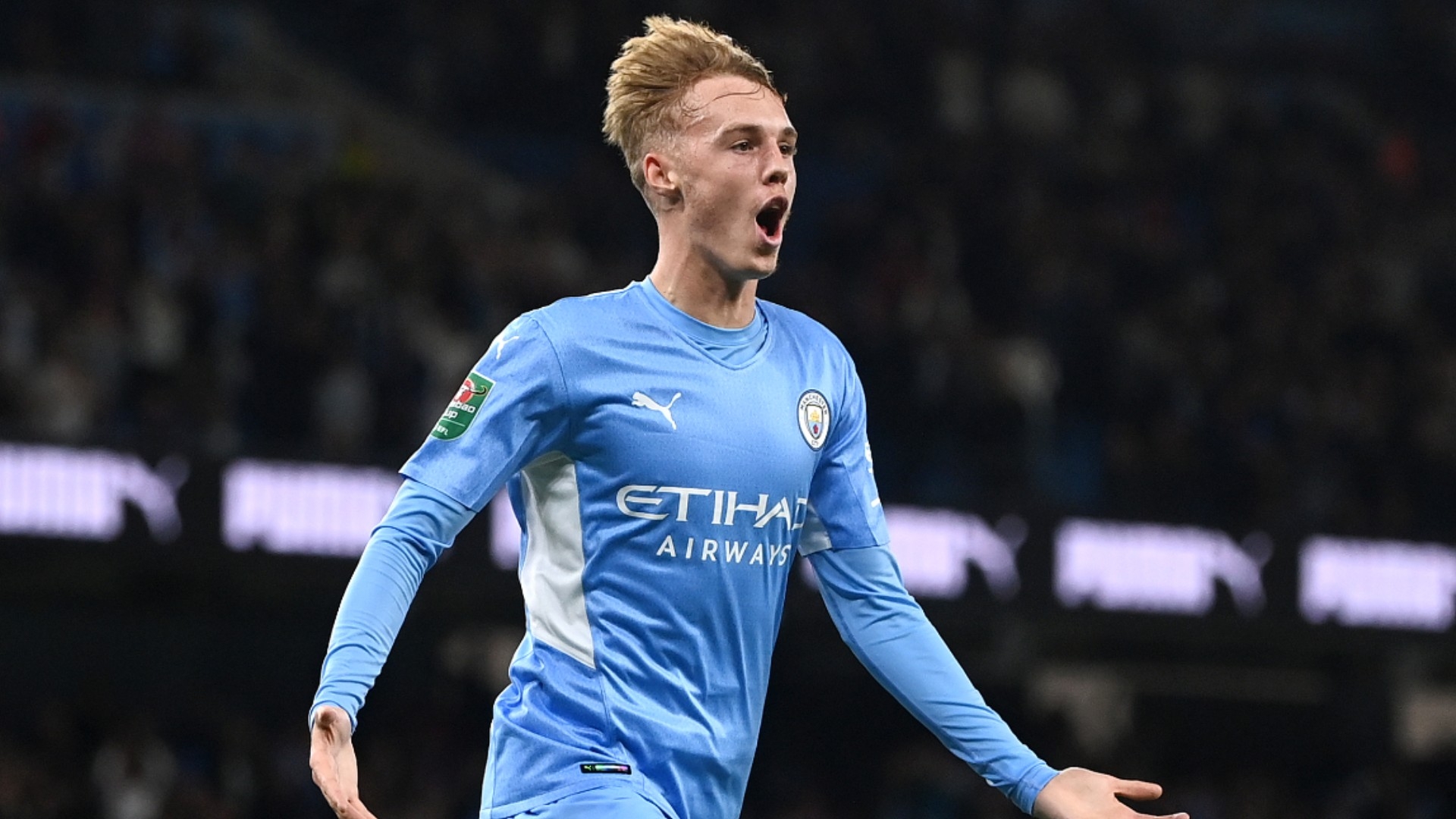 After making just his second Premier League appearance in the 2-0 victory over Burnley, the 19-year-old went on to star for the U23s side

As Cole Palmer casually strolled out of Manchester City’s academy stadium on Saturday evening, he did so carrying a match ball under his arm after scoring a sublime hat-trick in the Elite Development Squad's (U23s) 5-0 victory over Leicester City.

Palmer is a star at Premier League 2 level, with his treble marking the sixth occasion he has scored multiple times in a game for the EDS since the start of last season.

What made this effort all the more remarkable, though, is that just hours earlier he had been on the pitch across the road at the Etihad Stadium, making his second Premier League appearance as Pep Guardiola's side saw off Burnley.

“Playing with the first team at three and scoring a hat-trick and getting three points - yeah a good day,” he smiled at full-time of his second game on what turned out to be a busy Saturday.

Palmer is now a regular in Guardiola’s squad, and is making a big impression on the City boss with both his quality and his attitude.

The 19-year-old is following a similar path to Phil Foden, the City academy's biggest success story - learning on the training pitch while being slowly integrated into the matchday squad by picking up minutes as a substitute and playing cup games.

His appearance as a 90th-minute substitute against Burnley gained him more experience, but with the EDS game kicking off later in the evening, Palmer saw a chance to earn more game time.

“Everyone wants to play games, so when I saw the opportunity I thought I might as well come and play so that's what I did,” he said.

What a day for Cole Palmer! 🤩⚽️

“I'm doing what I love, I can't really complain. I’m playing footy so [it's not a problem] no. Obviously it's hard to keep focused all day and keep the energy, but apart from that I really enjoyed it.

“It's been a top season so far. Hopefully, I can get more minutes, keep pushing with the first team and hopefully be playing.

“I think it's just about timing, I've just got to be patient. Obviously wait for a chance with the first team and hopefully when it comes, like against Wycombe [in the Carabao Cup] I've just got to take it and make an impact.”

That willingness from Palmer to make himself available for both games will likely have caught Guardiola's eye, and it impressed EDS coach Brian Barry-Murphy too, who was delighted to have the midfielder in his side due to being without star men Liam Delap, James McAtee and Sam Edozie due to injury.

“The plan was to treat the first-team game on merits and see how we got on, and if he didn't get a lot of action in that game then obviously come here and play,” the former Rochdale boss told Goal  when asked about Palmer, who also started both England U21 games over the international break.

“He was a big driver in that himself - he was keen to play. I think it's pretty significant, from my point of view, to see a young player being so adamant that he wants to play no matter where it is.

"You can see the effect he had on the rest of the group - it was pretty good.

“It does feel significant that a player, even after the international break, is so hungry to come back into this environment and to be... I was going to say with his own peers, but among some guys who are significantly younger than him and and to care so much about his own performance.”

Sealing his hat-trick in style! 🔥 pic.twitter.com/kDhhQSeQx3

Palmer proved to be the outstanding performer, clinically scoring twice to give City a 2-0 half-time lead before completing his hat-trick late on with a wonderful curling strike from the edge of the box that found the top corner.

As an attacking player, the Manchester-born teenager insists he has to contribute goals and assists, and that training alongside players such as Kevin De Bruyne and Foden is only going to help.

“I just try and entertain obviously, give what the fans pay for, score goals and do what I do,” he said.

“That's what I've got to do in my position, but now I just want to kick on from here and hopefully go on and step up and get in with the first team.

“There's definitely a lot more to come, and me being with them every day is only going to improve me, so I've just to keep pushing and hopefully get in.”