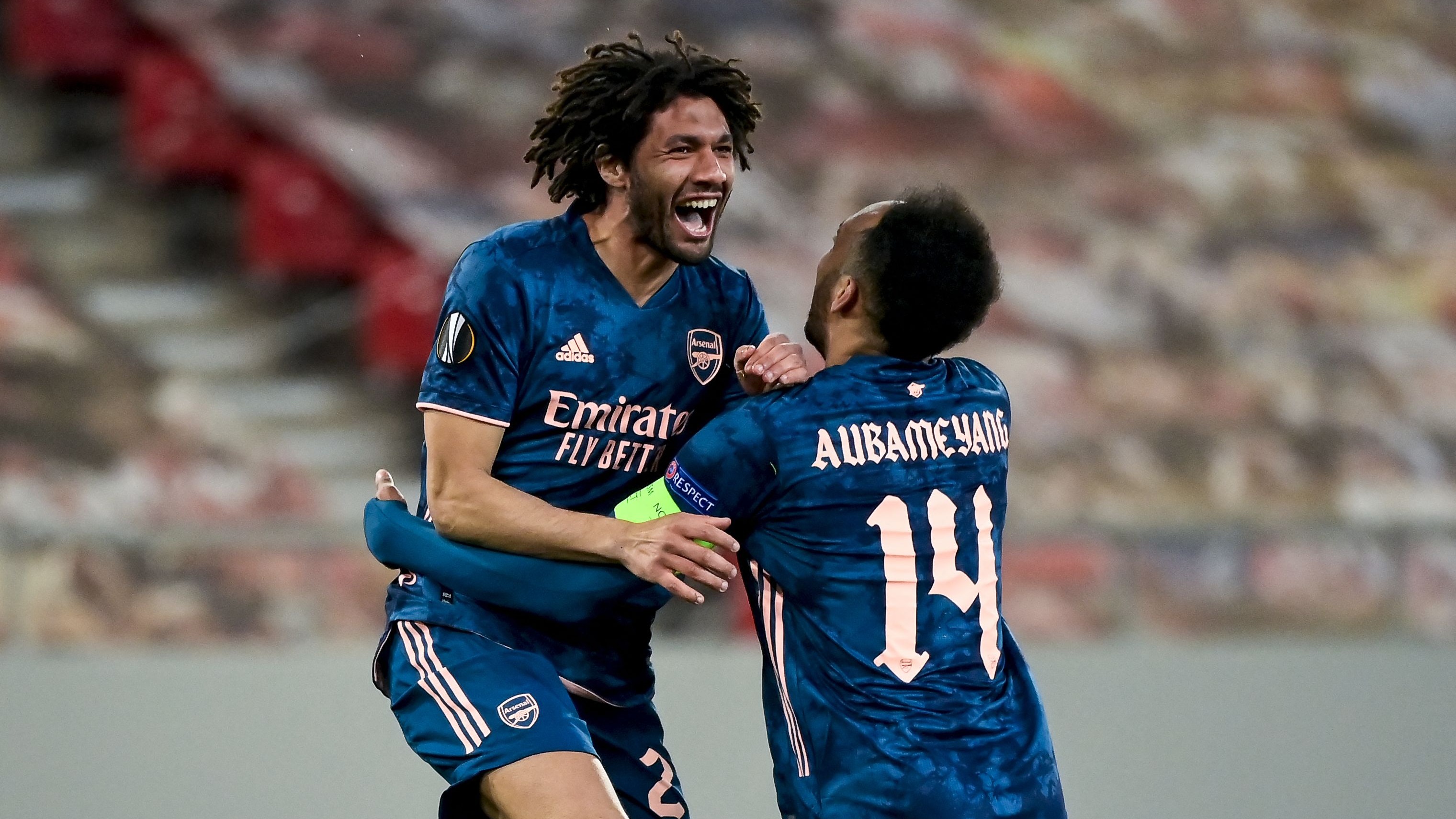 Goals from Martin Odegaard, Gabriel and Mohamed Elneny have put the Gunners on the verge of the Europa League quarter-finals

Arsenal did their best to shoot themselves in the foot again but instead they have one foot placed firmly in the Europa League quarter-finals.

It looked like being the same old story for Mikel Arteta’s side when a calamitous error by Dani Ceballos allowed Olympiacos striker Youssef El-Arabi to cancel out Martin Odegaard’s thunderous first-half opener.

But unlike at Burnley at the weekend, Arsenal picked themselves up. Goals from Gabriel Magalhaes and Mohamed Elneny ensured they will return to north London with a commanding 3-1 advantage over the Greek champions ahead of next Thursday’s second leg.

It was no more than they deserved after a dominant performance in Piraeus, but Arteta knows that if his side are to go on and win this competition, then they have to cut out the monumental errors that have plagued their performances in recent weeks.

"We are really pleased with the result, with the goals and the way we played in big moments in the game," the Arsenal boss said after Thursday night's win.

"But as well, we have to be very clear an honest with ourselves. We gave three goals to the opponent, they took one and at this level they are going to punish you.

"If we want to go to the next level we have to stop doing that and be more ruthless. When you are that dominant and playing that well, just kill the game."

Given what happened against Burnley at the weekend, when Granit Xhaka gifted an equaliser to Chris Wood, you would have thought the Gunners would have learned their lesson when it comes to taking risks while playing out from the back.

But it was a case of deja vu with Ceballos the culprit this time around.

There had already been warning signs in the first half, with David Luiz almost handing the hosts an equaliser after Odegaard had opened his Arsenal account with a powerful drive from distance which flashed past Jose Sa.

The visitors played their way into trouble again 13 minutes into the second half and this time they weren’t so lucky.

Ceballos had only been on the pitch for a matter of minutes when he got robbed of possession deep inside his own half having received the ball from Bernd Leno.

Morocco international El Arabi - who scored the goal for Olympiacos that knocked Arsenal out of the Europa League last season - took full advantage, bending an excellent finish past Leno to level things up.

It was the latest in a long line of costly errors for Arsenal and, if they are to progress under Arteta, that must stop.

Results and performances have improved since Christmas, but they can’t keep giving chances and goals away if they want to achieve anything the season.

Points have been thrown away in the Premier League against Wolves, Aston Villa and Burnley in recent weeks and only some late heroics by Kieran Tierney and Pierre-Emerick Aubameyang saw Arteta’s side past Benfica in the last round of the Europa League.

"That’s really positive because the moment we stop it obviously we are going to be even stronger, but the reality is we have to stop it immediately because if not the games are all the time there to drop points.

"But it is my responsibility, I make them play the way we want to play. It is just understanding the risk and rewards, when they are, the balls that we have to play and, as I say before, when [we play the balls].

"We have to get better at that, because if not it creates tension, insecurity and it creates belief in the opponent - and it is unnecessary."

Arteta will certainly have been delighted with the way his team responded to Ceballos’ mistake.

With memories of last season's painful exit to the same opponents still fresh, taking only a 1-1 draw back to the Emirates Stadium would have set alarm bells ringing.

Gabriel got the second of the night with a fabulous header from Willian’s deep cross and then Elnney - who had just replaced Willian - crashed home a superb strike from 25 yards which fizzed in off the post.

The celebrations that greeted Elneny’s goal told their own story. Arsenal know they now have a great opportunity to book a spot in the quarter-finals.

But what happened last year will serve a timely reminder that they can’t take anything for granted against an Olympiacos side who have won on each of their last two visits to Arsenal's home ground.

And if the last few weeks have told us anything, it’s that Arsenal never do things the easy way.