Once the home of Marta & Christen Press: How Sweden’s Damallsvenskan became a NXGN hub 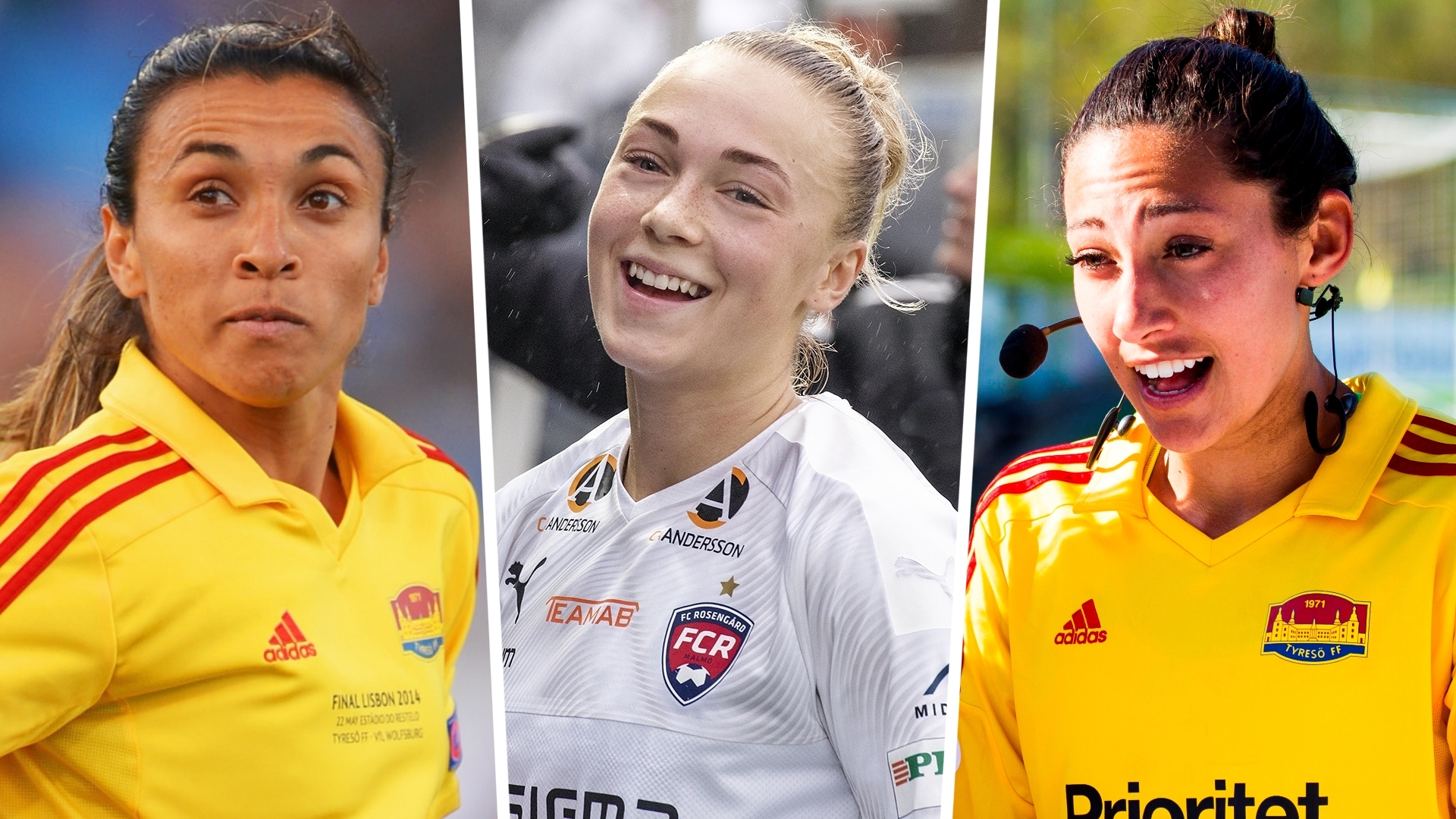 Sweden once boasted the world's best players, including USWNT icons. Its clubs were among Europe's best. But its identity has changed so much since

Sweden may not be the first country you think of when you think of football, but for a long time, it was the place to be in the women’s game.

As well as the country’s own top talent, from Hanna Ljungberg to Therese Sjogran, Brazil’s Marta, widely considered the greatest player of all time, called the Scandinavian nation her home for almost 11 years. A whole host of the U.S. women's national team's World Cup winners have graced the Damallsvenskan, Sweden’s top flight, too – Hope Solo, Christen Press and Meghan Klingenberg among them.

At this point, its clubs were at the forefront in Europe. Umea were “the Galacticos of women’s football”, reaching the final of the UEFA Women’s Cup, now known as the UEFA Women’s Champions League, five times between 2002 and 2008, winning back-to-back titles in 2003 and 2004. Djurgarden also reached the final in 2005.

“I was a former player. I played at the highest league on the men's side in Sweden and we were never close to the ambition, the attitude and the professionalism they had," Andree Jeglertz, head coach of Umea from 2004 to 2008, tells Goal of his Champions League-winning team.

He recalls the memory of Marta flying to the north of Sweden to sign, her plane landing in half a metre of snow, and the massive buzz around the city because of the team's success. There were big names elsewhere too – Formiga, another Brazilian sensation, played at Malmo with Sjogran.

“It was, of course, great to have all these big players around you,” Sjogran, 214 times a Sweden international and a World Cup finalist in 2003, says. “But I also think we got a little bit spoiled, you know?

"I don't think we really took advantage of having them here, not in marketing or to bring in bigger sponsors or stuff like that. We just had them and then, it's over.”

Players first started to leave in 2009, as Women's Professional Soccer (WPS), the new league in the United States, launched. Umea lost Marta and Ramona Bachmann, among others, and the club was plunged into financial trouble.

“One year, suddenly the best players left and then you couldn't get the same sponsors anymore, the spectator amount wasn't the same. A lot of things were changing, just because you lost your best player,” Jeglertz, who also left after the 2008 season, says.

However, WPS would be short-lived, folding in 2012. Suddenly all eyes were on Sweden again, with the battle for supremacy primarily fought between Rosengard and Tyreso.

Tyreso boasted a star-studded squad, featuring Marta, Sweden icon Caroline Seger, Spain midfielder Vero Boquete, Klingenberg and Press, among others. In 2014, they reached the Champions League final, losing 4-3 to Wolfsburg in one of the competition’s greatest ever games.

But, again, financial problems would hit. The club withdrew from the Damallsvenskan season shortly afterwards and wouldn't be rebooted until 2017, playing in the third tier. The dynamic of the league has since changed a lot.

Michael Kallback started working as an agent in 2013, beginning to represent female players a year later, inspired by the birth of his daughter. His clients include star names such as Denmark’s Nadia Nadim and Bayern Munich’s Swedish duo Hanna Glas and Sofia Jakobsson.

“Five or six years ago, [players] would probably have made a transfer within Sweden to a bigger club. Now, you see players from other clubs leaving and going straight out to Europe,” he tells Goal.

“I see it as a good sign that players can go from not only the best clubs in Sweden, but from all clubs, abroad. At the same time, it's a complex situation for Swedish football.”

The Damallsvenskan remains one of the best leagues in Europe, even if the names in the league aren’t as headline-grabbing as Marta or Press, but its role has become more development-focused.

In that sense, it is arguably the best on the continent, producing players such as Hanna Bennison, Goal’s 2021 NXGN winner, or helping to progress the careers of superstars such as Pernille Harder, the 2020 Goal 50 winner.

“When we look at players now, we also look at young players from abroad that see us as the next step,” Sjogran, who has been sporting director of Rosengard since 2015, says. “Before, it was obvious that we were the next step, but now we are just trying to find our place in the food chain.

“We can still compete with the best teams in Europe. We played Bayern Munich in the Champions League this spring. They won, but we could still compete – but, financially, we can't. We are struggling a little bit with our own identity."

“It's a very good window for young players,” Kallback says. “You see players coming here from different countries also. You see Jelena Cankovic at Rosengard – before she was in Sweden, nobody knew about her. Now, she's one of the best players in the league.

“I see the same kind of pattern that we've seen on the men's side for many decades. Victor Lindelof went to Portugal and then, he went to Manchester United. It's a good window."

There are several things Swedish clubs are doing in order to conquer the challenges this role presents. The first is the continued development of the youth systems, which have always been fruitful.

“We are just in the beginning of developing [our youth academy],” he says. “Youth is a key thing for us, especially when we talk about how we can, in the future, sell players and bring them from our own academies.”

Technique, physicality and an eye for goal - Hanna Bennison has it all ⭐

The scouting has developed massively too, with Sweden benefiting from their attention to those countries in Europe that bigger leagues may ignore.

“I know that the top leagues don't scout that much in these kinds of countries, like Serbia for example, because they think that the league isn't competitive at all, so the players actually have to go somewhere," Kallback explains.

"It doesn't necessarily have to be Sweden, but that's a good road for the players to take, and they know that if they do well, they will be spotted.”

With Sweden regularly targeted for its best players, it’s been important for clubs to change their approach to contracts, too.

“We want to sign longer contracts for sure, because then a bigger club is going to have to buy the player,” Sjogran explains.

“When we first started with female athletes, you rarely signed a contract more than one year,” Kallback adds. “Now, I haven't spoken to a club in Sweden that wants to sign a one-year contract with any player for like three years.”

The manner in which the league loses many of its players, with transfer fees still very small in the women's game, does present its own challenges.

“You have a very good team one year and the year after, three or four players leave and then suddenly, 'well, what happens now?' I still see that happen," Jeglertz explains. “Even if you sell them, it's not the figures that it should be. It is getting better, but it takes too long a time.".

However, with Sjogran now believing the league is more secure than ever, Jeglertz does see huge improvements since he was last in the Damallsvenskan, over 10 years ago.

“That wasn't the case earlier because then it was just about winning every day. The identity of each club is stronger today than it was. I think that is a key thing.

“And there cannot just be 18-year-old players here. We need to have some older players also that still have their passion. We still need these high-class players because those are the ones that are going to take us to compete in Europe.”

For all of the changes in Sweden, some things remain the same. The country is still a contender at international level, heading to the Olympics this summer having won a silver medal in 2016 and finished third at the 2019 World Cup.

Sjogran believes it’s “crucial” for Swedish players to go abroad, such is the benefit to their development and, as a result, the national team, but the Damallsvenskan still has a big part to play, with nine of the 22 players on Peter Gerhardsson’s Olympic roster for this summer playing their football at home.

The demand for Swedish players is just another reason to be proud, with Barcelona, Chelsea, Juventus, Bayern and more represented in that squad.

Should they deliver another medal in Tokyo, a realistic aim with the quality on show, the Damallsvenskan will have more than played its role, helping to shape the career of every single player involved.