In an exclusive interview with Goal, the retired right-back talks about the importance of the Games to his career and all of his compatriots

When Lauren looks back on his long and successful career, one moment stands out as the real starting point.

It’s not his move to Arsenal or any of the six major trophies he won during his illustrious stay in England.

It's the Olympics of 2000 when he made history with Cameroon in Sydney, winning the gold medal after a thrilling penalty shootout success against Spain in the final.

“The momentum for my career started at the Olympics, definitely,” the legendary Arsenal right-back tells Goal.

“Being at the Olympics, winning that gold medal for Cameroon, and for Africa, it was just unbelievable. It was fantastic.”

Football has a long history with the Olympics. It's been included in every summer games as a men's competition except 1896 and 1932.

Despite that, it is not viewed by many as one of football’s most important tournaments and few ever mention it in the same breath as the World Cup, European Championship, Copa America or Africa Cup of Nations.

But for Lauren, winning the gold medal at Sydney is up there alongside anything else he achieved during his years as a professional.

“It was one of the best moments of my career,” he reveals. “And I tell you what, it’s now that I enjoy it the most. When I really think back to those days, I’m really aware of just how big that was.

“It’s not just for the fact that I won it, but because of how many millions of people we brought happiness to as a team.

“Millions of people were proud of what we did and what we achieved. That gold medal wasn’t just for me, it was for Cameroon and it was for Africa.” 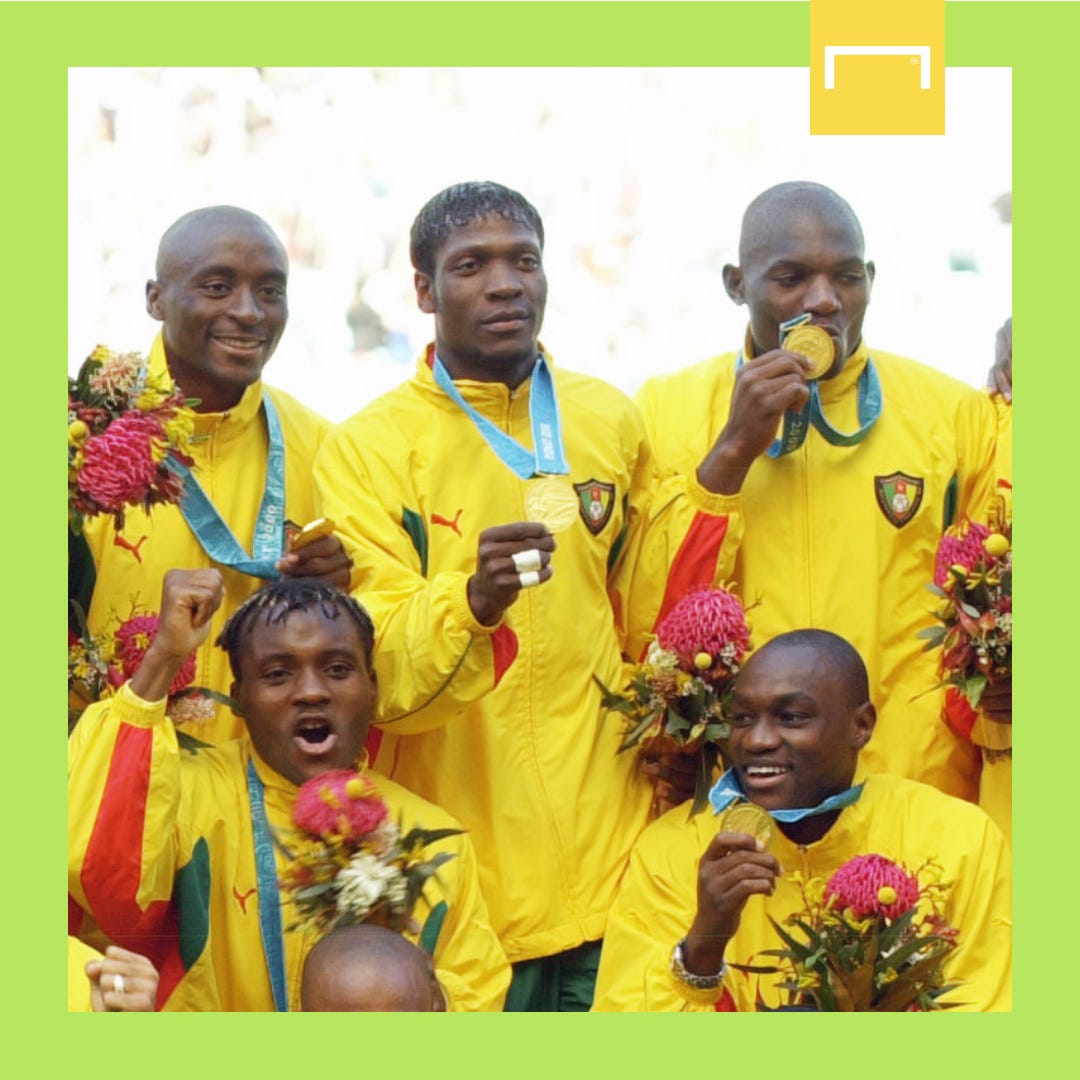 Cameroon went into the Olympics looking to repeat the success of Nigeria, who had become the first African nation to win a gold medal during the Atlanta Games four years earlier.

Lauren travelled to Sydney having just signed for Arsenal, and the Cameroon squad, which included players such as Patrick Mboma, Patrick Suffo, Pierre Wome and a young Samuel Eto’o, were in confident mood.

Due to the nature of the tournament, the squad was unable to take part in the opening ceremony, but after stints in Canberra and Melbourne, they were eventually able to take their place with the other athletes in the Olympic village.

“It was amazing,” Lauren recalls. “There were athletes everywhere and it was such a great experience for all of us.

“We spoke to so many Spanish people, English, Irish, French – people from all over the world.

“It’s something that I talk to my son about now. He is starting to play now for Sevilla and I try to share with him all of those experiences that I had.

“I’m proud to teach him all my experiences, like being in that Olympic village, mixing with all the other athletes. It was just fantastic.”

There were some huge names at the Sydney Olympics, with the likes of Cathy Freeman, Ian Thorpe, Michael Johnson, Maurice Green and Marion Jones all starring during the Games.

So, who did Lauren meet during his stay at the village, and what sort of fun did he have? 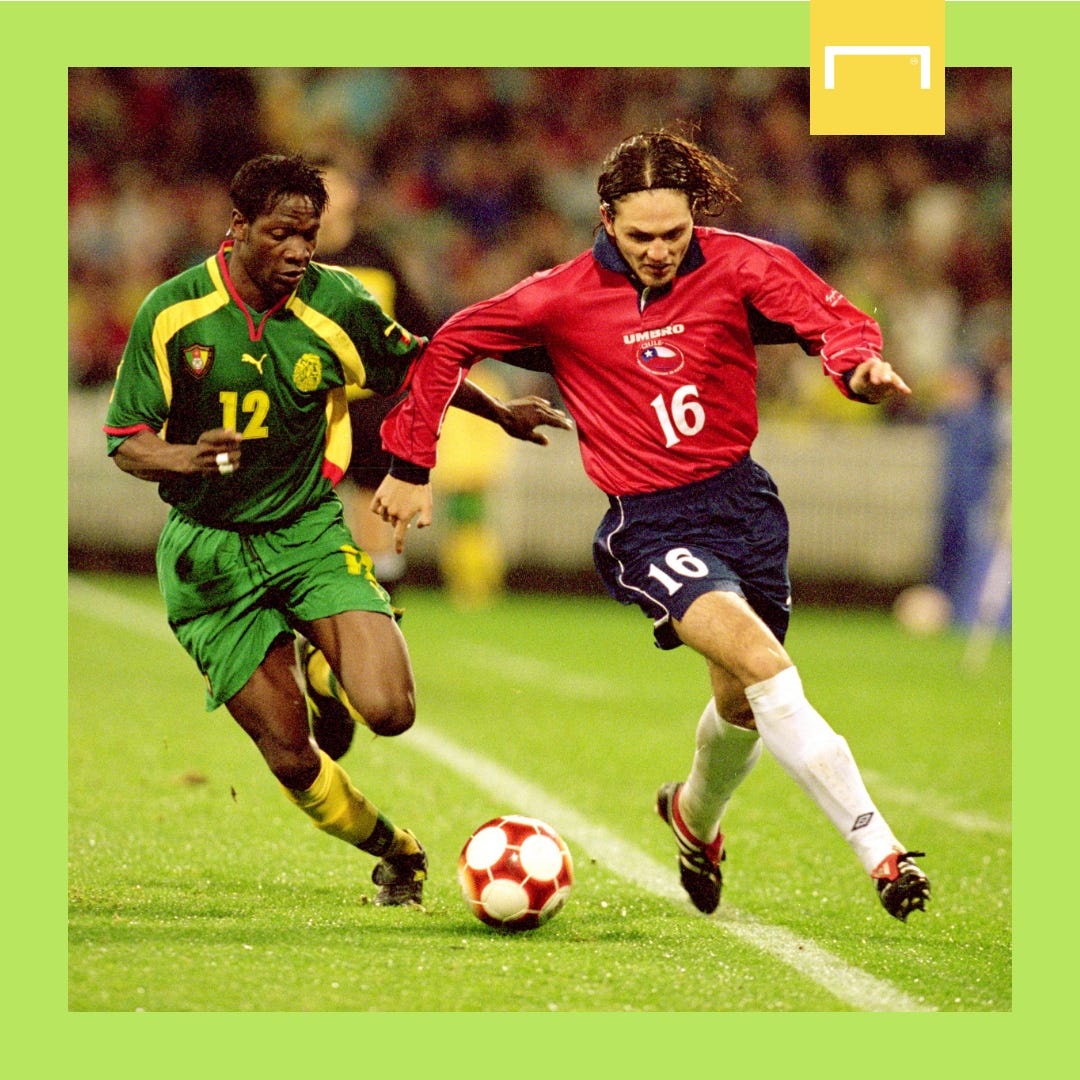 “I didn’t know any of them,” he laughs. “I was just so focused on my national team and trying to win to win the football.

“We talked to lots of athletes from different countries, but I didn’t know who they were and I didn’t get to any parties or anything.

“I just wanted to be at my best in that Olympics because I knew that whatever we did as a team would be remembered forever.”

And that approach certainly proved to be the right one because what Cameroon achieved during those three weeks in Australia will certainly stand the test of time.

They emerged from a group containing Kuwait, United States and Czech Republic, with Lauren winning a penalty in the 1-1 draw with the Americans and scoring a goal in a 1-1 stalemate with the Czechs.

A quarter-final against the mighty Brazil was next and after Ronaldinho had struck in injury time to cancel out Mboma’s opener, a golden goal from Modeste M'bami sent Cameroon into the semi-finals and set up a meeting with Chile.

It turned out to be a game that Lauren will never forget, as it was he who sealed a 2-1 win with an injury-time penalty.

“Getting to the semi-final and beating Chile was just amazing,” he says.

"One of my heroes was Ivan Zamarano, who played here in my home town of Seville, so playing against him and scoring the winning goal was fantastic. 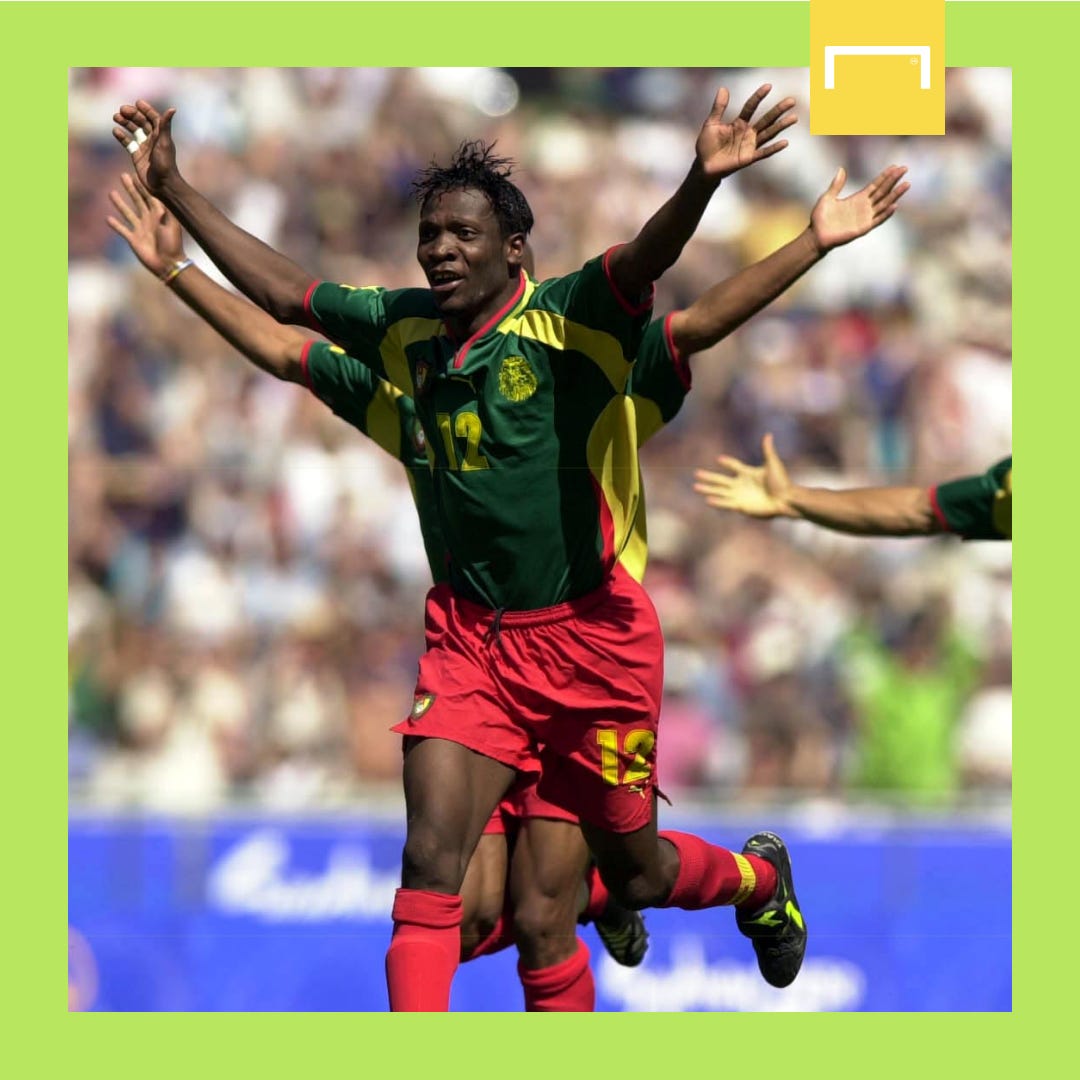 “In the USA game in the group stages, I provoked the penalty. I got the ball and was fouled. I was going to take the penalty and I think Patrick Mboma got ahead of me and took it.

“So, when the time arrived in the semi-final, I said ‘No, this is my time.'

“I went straight away, got the ball and nobody was going to take that ball from me. It was my time. I knew that I was going to score, I was 100 per cent confident.

”It was a fantastic moment for me for a few reasons. One was Zamarano was playing for Chile and the other was that at the 1998 World Cup I was sent off after five minutes against Chile.

“So, I knew this was my time to avenge that moment. When I scored, there was so much satisfaction.”

What Lauren experienced in that semi-final was the perfect warm-up for a dramatic and emotional gold-medal game against Spain, the country he had moved to with his family after they left Africa.

Just to add a further layer of narrative to the story, the Spain team that day included Jose Mari and Carlos Marchena, two close friends he had progressed through the Sevilla academy with as a youngster.

Xavi gave Spain an early lead but an own goal by Ivan Amaya levelled the scores and eventually took the game to penalties.

Lauren held his nerve to score once again from the spot and when Amaya missed, it was Cameroon’s time to celebrate. 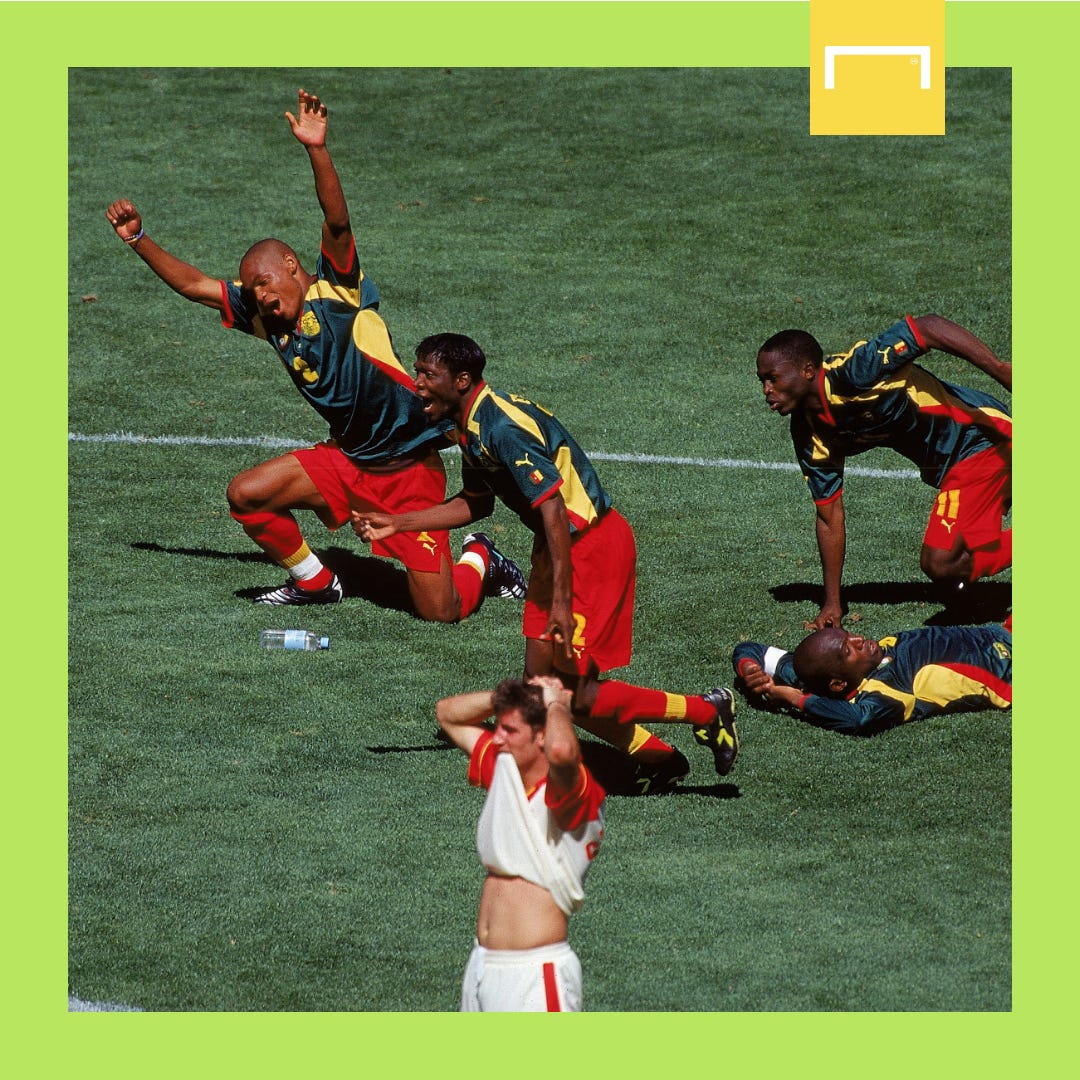 “The feeling before that game was a bit strange,” Lauren admits. "My wife is from Sevilla, so as a family, one side was looking for Spain to win and the other was looking for Cameroon to win.

“I was playing against Jose Mari and Marchena as well, so it was a bit strange, but once I stepped on the pitch, I just wanted Cameroon to lift the trophy and to get that goal medal.

“It was such a tough game. I had (Carlos) Puyol marking me and it was so difficult to get away from him because he was so quick and strong. He was on my back the whole time, so it was very tough.

“I just remember at the end feeling like we had done something very special. I felt very proud at that moment, very proud.”

Winning an Olympic gold medal is something only a select few can claim to achieve.

What Lauren achieved with Cameroon 21 years ago will rightly be remembered and he still feels it was the springboard for what followed during the rest of his trophy-laden career.

So, does he still have the medal?

“Yes, I still have it,” he said. “But if you see my house, I don’t have the Olympics medal, the FA Cups, the Premier Leagues on show. I don’t have things on my wall. I keep them safe and from time to time I show them to my kids.

“I know what I won and I’m very proud of it, but it’s not something I have to see every day. I did all that, fantastic, but my philosophy is always, what comes next?”