In an exclusive interview with GOAL, the Mexican-American right-back reflects on her long and winding road back to the national team

As the national anthems played ahead of a clash between her two cultures, Mexican-American full-back Sofia Huerta found herself struggling with a familiar question: Who do I really want to be?

This was back in 2013 in Washington, and Huerta had made her choice. She had chosen to represent the country of her father: Mexico.

But, as the Star-Spangled Banner played ahead of a friendly against the U.S., Huerta couldn't help but think about who she really was.

"[Playing for Mexico] was a great experience for me. I got to play internationally at a really young age," Huerta tells GOAL. "And it actually made me realise what I knew all along: that I actually wanted to play for the U.S.

"Hearing that American national anthem, I just thought, 'Oh, I just resonate with this more right now and that feels more true to me.'

"I love that I'm Mexican, that was just what my dream was... A lot of people were giving me their advice and letting me know that I made the wrong decision. I took it all with a grain of salt.

"This is my journey. I know what I can really do."

Her father, Mauricio, had emigrated to the U.S. from Puebla, Mexico, settling in Boise. And, for those that don't know, Idaho is neither a hotbed of Mexican culture nor a prime developer of soccer talent.

And so Huerta had a different kind of upbringing, one that saw her connect with her Mexican roots even if few around her truly understood them.

"I think my whole life I've kind of identified with being Mexican-American," Huerta says. "I think it was a different experience growing up in Idaho, which is obviously a more low-diverse area.

"And so I always knew that I was different."

Different she was. Huerta emerged as a multisport star in Boise, winning Idaho's Gatorade Player of the Year award twice in soccer. She caught the eye of Santa Clara University, one of the premier women's soccer programs in the country.

By 2012, her sophomore year of college, she was playing for Mexico, having previously represented the U.S. at the U-20 level. The decision to play for Mexico, at the time, gave her a source of pride and a chance to represent her father and all of the family in his homeland.

In December 2014, after a period of soul searching, she announced she would not continue to play for Mexico. The switch, ultimately, took nearly three years.

After that wait, Huerta had hopes that it was her time, her chance to finally seal her spot on the USWNT squad. But, after just seven caps, she found herself out of the picture.

It was at that time that Huerta felt most alone. After several seasons in the NWSL that saw her bounce from position to position with the Chicago Red Stars and Houston Dash, she embarked on two loan spells to Australia, far from home and seemingly further away from her national team dreams.

Nowhere near the USWNT and with her time as a Mexican international long gone, Huerta had moments of regret.

Huerta looked back on her initial impressions with the USWNT and believed she'd squandered her chance. She looked back at all of the times where she didn't give as much as she could have .

She'd heard the criticism from those that said she never should have left. She remembered everyone who told her she wasn't good enough for the USWNT. And, at that time, she started to believe them. 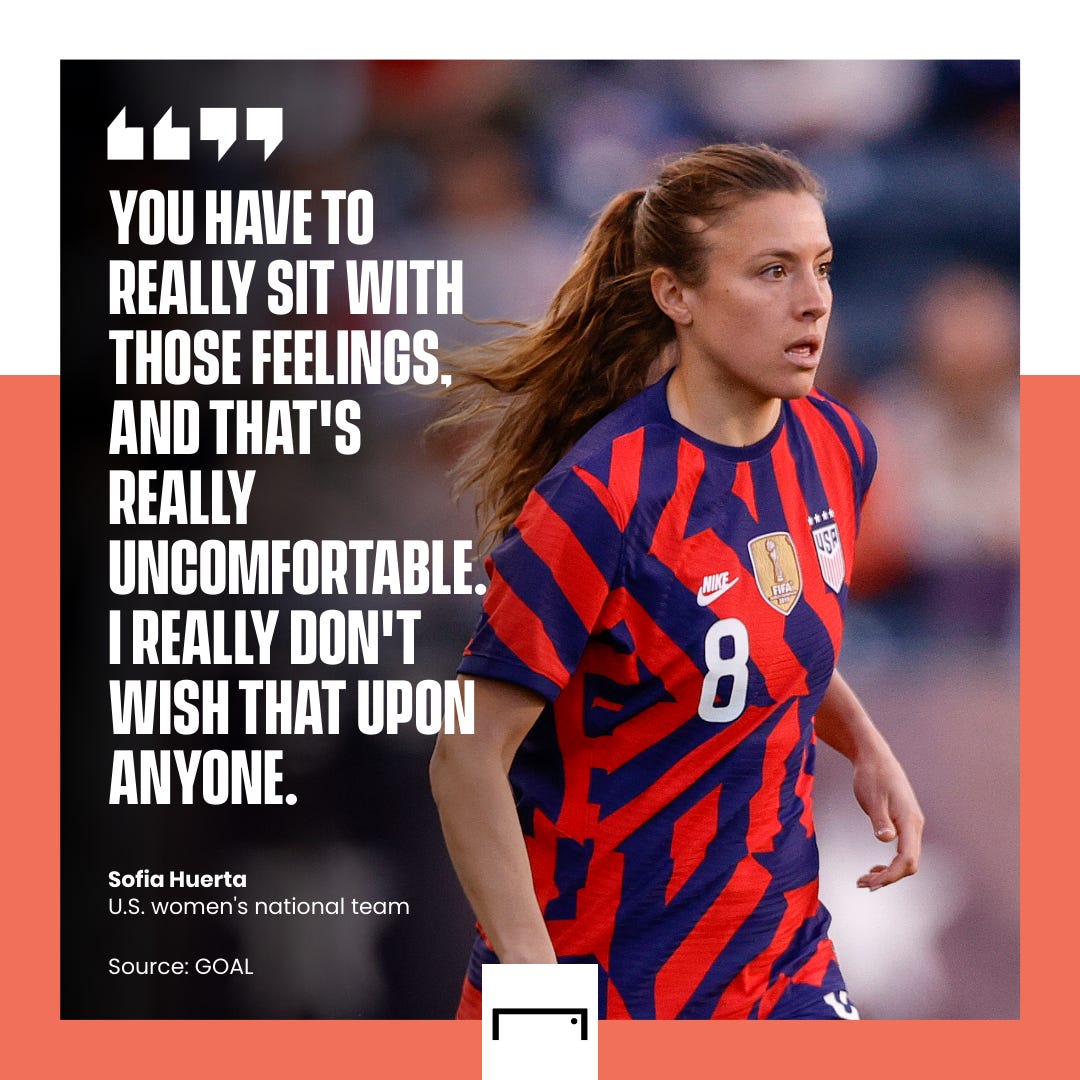 "Personally, I doubted my viability a lot during those years," she said. "I had a lot of regret in terms of how I acted during my time with the national team.

"I feel like I wasn't as professional as I should have been. I wasn't doing everything I could to make sure that I was getting called in every time.

"In the years where I wasn't getting called in, you have to really sit with those feelings, and that's really uncomfortable. I really don't wish that upon anyone.

"I would kind of regret what I did in the past and then I would get anxious about the future and whether I was ever going to get the opportunity again, and that was not helping me at all. In fact, it was actually hurting me, I wasn't playing to my best ability and I just wasn't enjoying what I was doing.

"That was something I also had to kind of think about like 'I'm a professional soccer player!' Just because I'm not on the national team doesn't mean that I'm not a badass and that I hadn't made it this far. I had to change the narrative."

That, Huerta says, is still a process that is ongoing, even if circumstances have changed massively since those years in the wilderness. She's worked with a life coach since she has left college, and she believes that taking care of her mental health in that way has helped propel her to where she is now.

The 29-year-old defender has become an important piece at OL Reign, one of the NWSL's top clubs. Having previously played just about everywhere on the field, including striker, Huerta is now one of American soccer's top right-backs.

Huerta is also back with the USWNT, a key figure as they head into the CONCACAF W Championship. After all of those years of waiting, Huerta has now featured in five of the USWNT's eight matches so far in 2022.

The success is a long time coming, but Huerta knows it can all go away in the blink of an eye.

"[Seeing my life coach] isn't something that you do for like a week and then like your life has changed," she says. "I'm personally, always, every day growing.

"Like, it may seem like I know everything that I'm doing and that I don't have performance anxiety and that I play so many games so I'm fine. No, every day challenges me. Every day is something new. 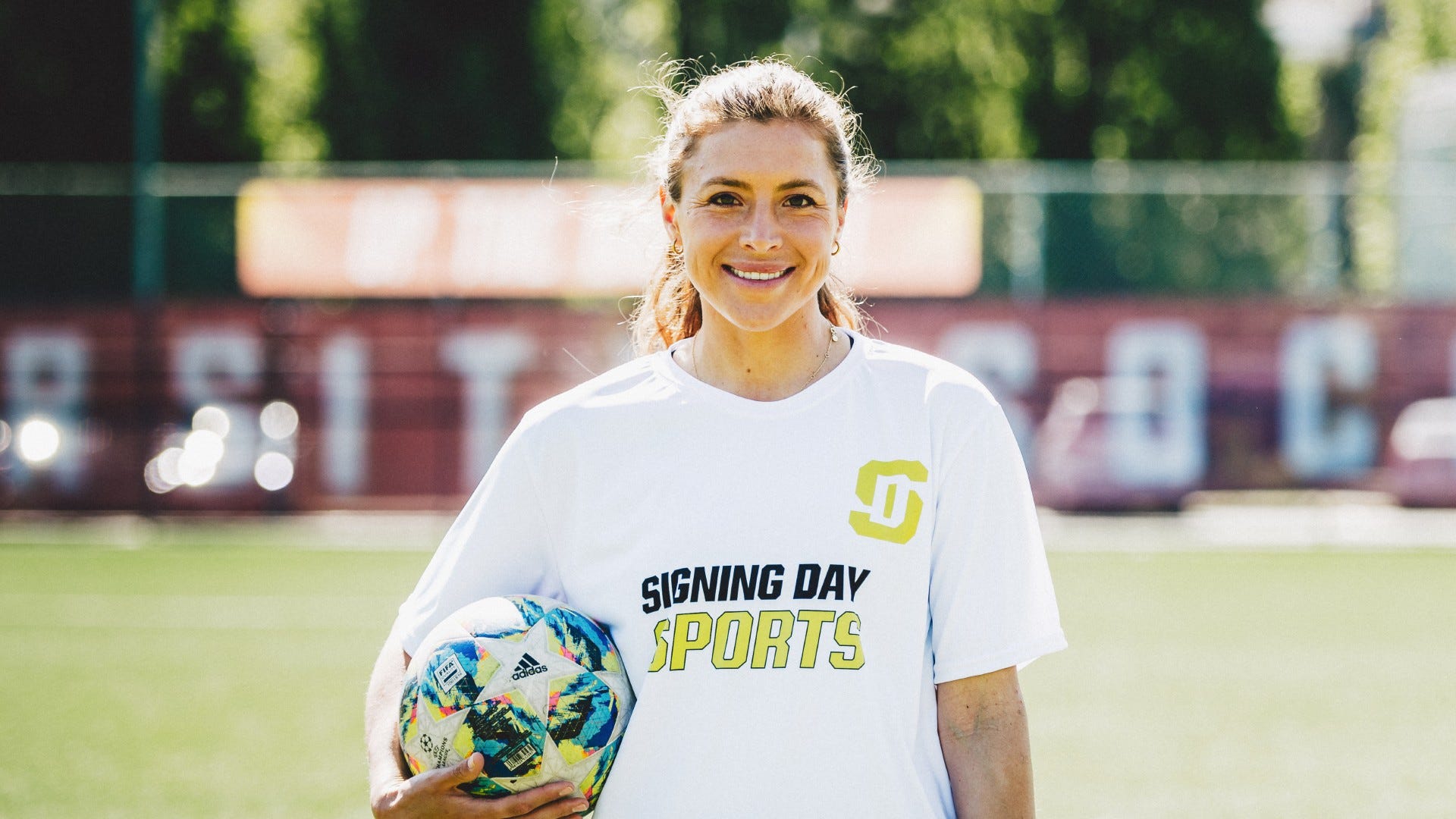 "One day can be great and the next day, it's not so great. I think the main idea and point is that a lot of things are out of your control and all you can really do is have a short-term memory and move forward.

"A lot of people don't really talk about their mental health because I don't think people are really aware of anxiety or whatever it is and that's something I've always been super hyperaware of, and I think that it's really just helped me in all aspects of my life."

All these years later, Huerta has developed a bit of perspective. She realises that, in some ways, she was one of the lucky ones.

"Being from Idaho, I just was not at a place where I was seen or had exposure or was given many opportunities in terms of getting recruited and seen by college coaches," she says. "If you're from like California, you're being seen every weekend from like some of the top colleges.

"For me, particularly that was not the case. Being Mexican-American did also get in the way. I feel like even when my club team would go on trips, my family, unfortunately, could not afford for me to go on that trip, so I just wasn't getting the exposure. And that was something that was really, really hard for me.

"I had those thoughts about how I was playing with these girls and they're also good but, unfortunately, because of the lack of resources and quite honestly because we're from Idaho, they just weren't given the opportunities.

"That happens all over, whether it's monetary reasons or where you're from. A lot of people are missing out on such great opportunities."

With that in mind, Huerta has recently partnered with Signing Day Sports, a college recruiting platform that uses technology to help players that are out of focus, players like Huerta, get their chance in the spotlight.

Signing Day recently expanded to soccer, with the platform allowing athletes from all over the U.S. to upload footage, answer interview questions and, most importantly, connect with college coaches. It's a platform that Huerta believes would have helped so many girls like her get seen by the right people.

"I really think about what it would be like if this platform was available to me when I was going through the recruiting process," she says. "I think it would have made it much easier.

"I think it would have been great just to have this platform to interact with coaches and to put myself out there because I think a lot of coaches didn't see my value, which obviously affected my recruiting process.

Excited to announce my partnership with @SDSports . High school soccer players can now create a profile on the app and be seen by college coaches! If you want to get recruited, download the Signing Day Sports app, and take your future into your own hands! https://t.co/0Xw3Doh4rG pic.twitter.com/zQbMzwfPLi

"Even though I'm very happy with where my journey has taken me, I just think that this is such an important platform for people because it helps athletes get discovered and recruited by college coaches across the country, which is something that is not easy.

Huerta has earned her moment in the spotlight and, if all goes to plan, there's a chance she could earn a chance to play at the biggest stage.

The World Cup is just a year away with the Olympics coming up in 2024, and Huerta has reason to believe she could finally get that chance.

It would be a dream come true for Huerta, the Mexican-American girl from Boise that overcame a lack of exposure, her own anxiety and a battle within herself just to make it this far.

But, before she can look ahead to those moments, her story has another very fitting chapter to be written.

Coincidentally, the CONCACAF W Championship take place in Mexico as Huerta returns to face the country of her father.

The USWNT's third match of the group stage will be against the hosts, perhaps putting Huerta against Mexico with a World Cup spot on the line.

She'll hear those same national anthems that she heard nine years ago but, this time, she'll be on the other side. The side she truly wants to be on.