The two-time World Cup winner signed for Tottenham last month but hasn't played for over a year after giving birth to her daughter, Charlie, in May

Alex Morgan’s move to Tottenham Hotspur has generated more hype than any other transfer in Women’s Super League history.

The 31-year-old, a two-time Women’s World Cup winner and Olympic gold medalist, is one of the most recognizable players in the world.

But she is faced with a new challenge this year as she looks to return to that top level after having her first child.

Morgan gave birth to daughter Charlie on May 7 and, as a Tottenham debut awaits, she is still slowly getting used to playing football again, both on and off the pitch.

“I’m still waiting for it to come back,” the United States international laughed after being asked where her first touch is at the moment.

“Last week was my first introduction to team training and I felt really sharp, really fit and really fast in individual training.

“Then I get into team training and my touch is all over the place, I’m the slowest on the pitch, my quick to twitch muscles are non-existent.

“In my second week of training it has got a lot better. My speed has increased a lot, still not to a point that I’m super happy with, so I think that I just need to be really patient with myself. Overall, I feel really good, just very sore.

“The first week [leaving Charlie] wasn’t actually very difficult because I was able to choose my own hours and I was training on my own in south Florida.

“Then, when I went to Orlando with the team, it was still very short days, like three or four hours. The days here are much longer, like six or seven hours.

“Just juggling being away from her that much and leaving that responsibility with my mother in law, and also figuring out not being able to nurse Charlie and having to [breast] pump between training and our meeting, or training and our gym session, it’s been quite interesting.

“But I’ve had some help and advice from my teammate Sydney Leroux and I feel like you just get used to it.

“The first week I felt like the days were running together and now this second week I feel like I’m starting to get the hang of it a little bit.”

Leroux, a long-time teammate of Morgan’s at international level and with the Orlando Pride, has two children and has been someone Morgan has frequently gone to for advice about motherhood.

“I’ve been really lucky to have played with her for so many years and just see her go from someone who dominated the game to having two kids and continuing to dominate the game,” she said.

“I’ve had so many questions just around juggling personal life and football life that she’s been able to really help guide me through.

“Last year when she had her daughter, Roux, she came back around six or seven weeks [later] to get back into training slowly, get back on the pitch and play in a match I believe. 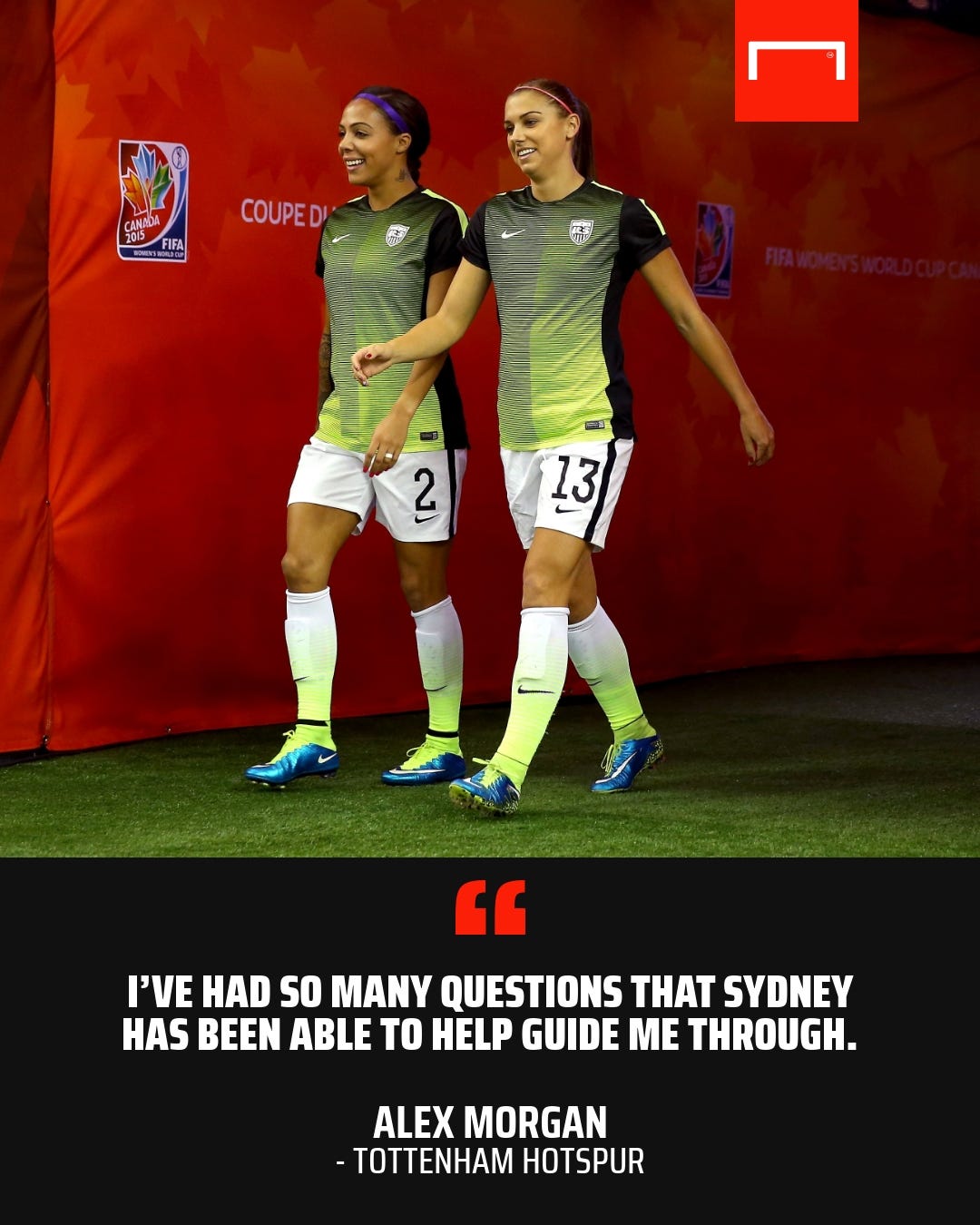 “Three months postpartum was just incredible. I’ve looked at that and our bodies, postpartum, and everything is different and so individual to that particular person.

“But I’ve taken as much as I can from her and the advice I can – even how to [breast] pump on the way to training. Or what to do after training in terms of going back home and having to take care of kids, rather than having to really take care of your recovery and make sure your legs are good.

Morgan could make her Spurs debut this weekend against Manchester City, who have fellow USWNT stars Rose Lavelle and Sam Mewis - who was particularly impressive in City’s win over Arsenal in midweek - in their ranks.

“They don’t have many flaws,” Morgan noted. “Rose could definitely add another level of threat to their attack and I think Sam also is feeling a lot more settled.”

Any game time for Morgan will likely be off the bench as she continues to work back to full fitness.

But she is settling in nicely with her new team-mates, with forward Kit Graham already mimicking her tea-sipping celebration from last summer’s World Cup semi-final against England.

“They were on the other team and they scored a penalty,” Morgan laughed. “I wasn’t really looking and then all the girls were laughing – and I realized why they were laughing.