There had been uncertainty for some time as to whether the two-time World Cup winner would stay beyond the new year or return to the United States.

Unsurprisingly, with the NWSL's pre-season to start on February 1, it was confirmed on Monday that it would be the latter.

It has been a move that transfixed the media and demanded attention from day one, but how will Morgan’s time with Spurs be remembered?

Given the hype that surrounded her arrival, some will call it a disappointment. After joining in September, Morgan made just five appearances for the club, scoring twice, with a knee injury contributing to those low numbers.

However, with her still returning to full fitness after giving birth to her daughter, Charlie, in May, it always felt like the forward’s time at Spurs would leave more of an impact off the pitch than directly on it.

There is no way of overstating the effect that her presence has had on a young squad that is only in its second year in the top-flight.

Eleven players in Tottenham’s first-team squad are aged 25 or younger. Aside from a handful who won trophies in minor roles while coming through the academies of clubs like Arsenal, only three players at the club have won major honours. One of those is Alanna Kennedy, who is on loan from another NWSL club, Racing Louisville.

“When she is speaking in meetings you pick up on little things, and her movement on the pitch is world class,” Rosella Ayane, the 24-year-old striker who scored her first league goal for the club last week, explained to the club’s official website.

We can confirm that @alexmorgan13 will be returning to the United States in the new year after the conclusion of the first half of the @BarclaysFAWSL season.

Everyone at the Club wishes Alex well in the next stage of her career.

When Tottenham faced Manchester United earlier this season, Morgan was not in the matchday squad, but was in the stands watching on and was on the pitch giving advice to Ayane as the team came out for the second half.

“Watching her in training, you pick up on little habits of hers and she’s given me tips.”

It is not just the strikers or even just the young players that learned from the World Cup winner either. Josie Green, Tottenham’s 27-year-old midfielder and captain, put it perfectly, saying: “I want to try and absorb as much as I can from her because it’s not often that you get to play with a player of her calibre.”

This month has seen Morgan have a direct impact on the pitch, too. The 31-year-old ended the year by scoring in consecutive WSL games, helping Spurs record back-to-back victories and end their winless start to the league season.

After a difficult few months, which culminated in long-standing managerial duo Karen Hills and Juan Amoros leaving the club, she has helped Tottenham turn a corner under new head coach Rehanne Skinner.

Morgan has also been part of the club at a time when things have really started to change for them off the pitch.

Cynics may say Morgan’s signing was just good marketing from Spurs, but hindsight suggests it may have been a sign of things to come. The club have since moved their women’s team to the same facilities as their men’s team on a full-time basis, something Skinner called a "statement of intent".

There is no doubt that the attention Morgan’s move to Spurs gathered and what she has actually helped them achieve are worlds apart.

She has not helped them win a trophy, like Sam Mewis has for Manchester City. She has not helped them to the top of the WSL table, like Tobin Heath has for Manchester United. That is not to say she was expected to hit those heights, having not played for so long, but the success stories of other USWNT stars in the WSL will understandably overshadow the quiet work Morgan has been doing. 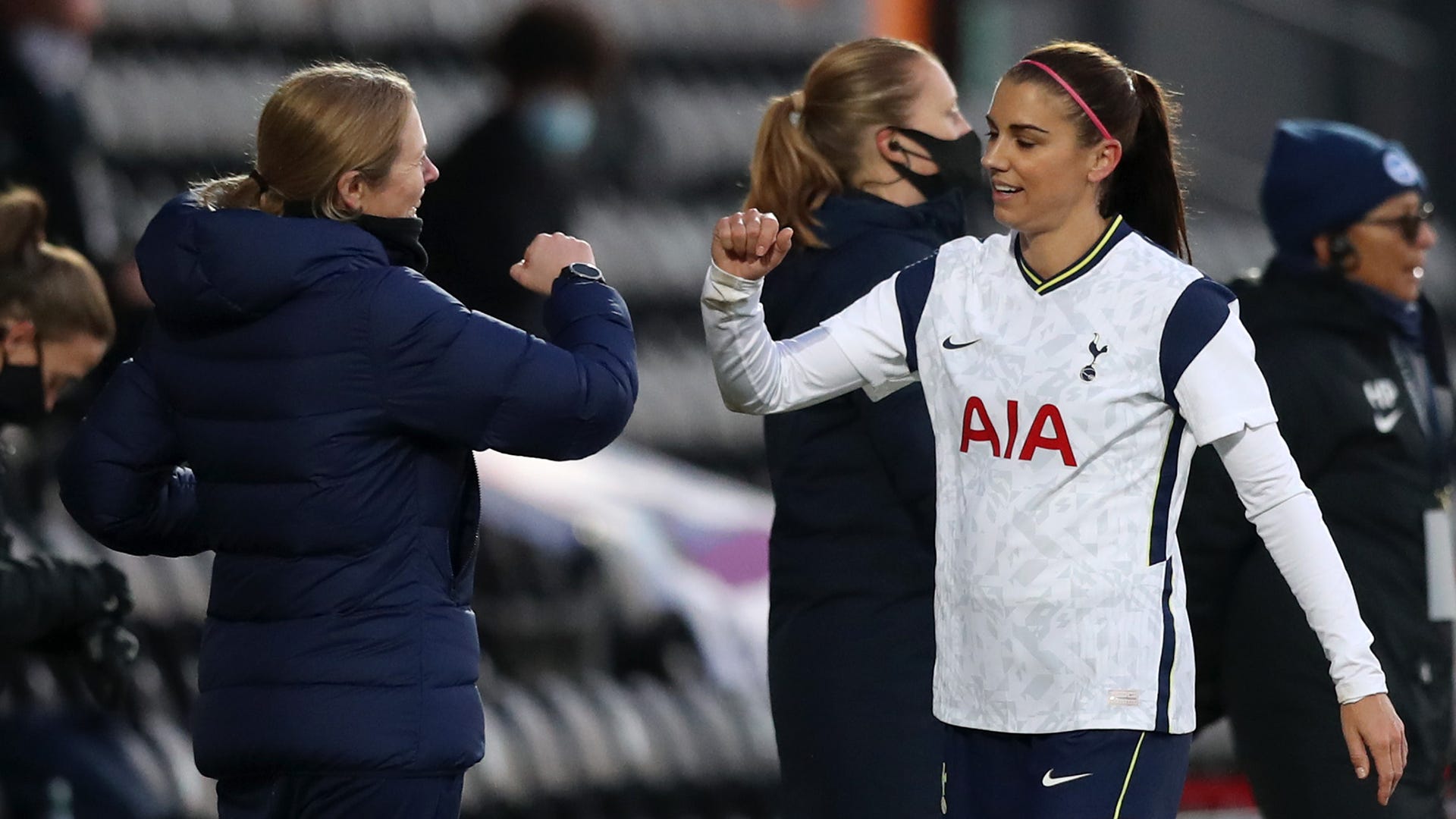 She brought incredible experience and quality to Spurs' team and, since returning to fitness, she has scored goals and helped them win games.

It is easy to forget about the impact Spurs have had on Morgan, too. After a year out, this was a move that helped her rebuild her fitness and play football ahead of a huge 2021.

The Orlando Pride, who hold her NWSL rights, will be hoping for a successful season, while the United States will be going for gold at the Olympic Games next summer. Morgan has given herself a great platform to build on in order to play a crucial part for both.

It was not a title-winning spell. It was not a spell that lit up the WSL. It was not even a spell many fans could enjoy, with the Covid-19 pandemic meaning they were not allowed to see much of Morgan in the flesh.

But, given the circumstances, her time at Tottenham was probably as fruitful as it could have been, for her and for the team, and there is no doubt she will leave a lasting impression on the players who are the future of the north London club.