The suspension of the majority of football around the globe due to the coronavirus pandemic has had a major impact on every aspect of the beautiful game and has even affected FIFA 20.

FIFA Ultimate Team closely follows real-world football, with players in FIFA 20 receiving upgrades based on their real-life performances and EA Sports running special challenges to coincide with tournaments such as the Champions League and Europa League.

How has Team of the Week changed?

With none of Europe's top five leagues running due to Covid-19, Team of the Week 28 for FIFA 18 would have just been made up of players playing in Argentina, Mexico and Russia. As a result, EA Sports decided to pause the regular Team of the Week squads until football resumes.

The ratings assigned for Team of the Week Moments will be based on the player's FIFA 20 ratings, so the upgraded Kyle Walker in FUT 18 was given an 86 rating, while the FUT 20 Moments version is rated at 87 as he has already received an 86-rated in-form card this season. 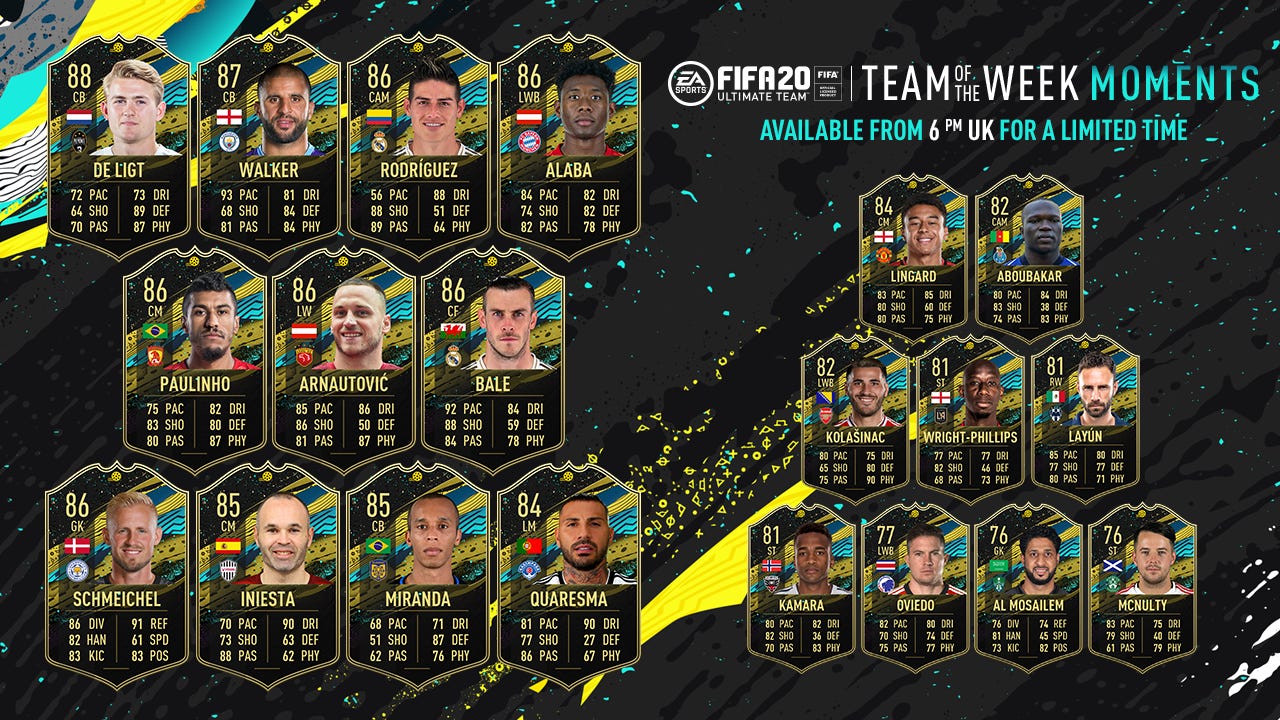 What has replaced Marquee Matchups?

Marquee Matchup Moments are Squad Building Challenges (SBCs) based on historical games, just like the Team of the Week Moments. They are determined by classic ties that happened during the correspondening week in a previous season.

Will there be more Player of the Month items?

Player of the Month awards were assigned for the major leagues for February, but as play was paused in March, these awards have also been postponed indefinitely in real life. FIFA 20 reflects this reality and the latest Player of the Month (POTM) items will be the ones given out in February.

How are Champions League and Europa League live items affected?

These will all return once these competitions resume, with Live items picking up where they left off e.g. Bayern Munich's Leon Goretzka and Kingsley Coman will both receive boosts if they advance from their Champions League last 16 game with Chelsea.

Will Team of the Season be delayed?

Team of the Season usually kicks off in Ultimate Team at the start of May, but this may be delayed if there is clear indication that leagues will resume to continue their 2019-20 seasons. If the Team of the Season promotion is delayed, it will likely be replaced by a new promotion in May.

However, if it looks like the regular seasons are likely to be cancelled, Team of the Season could go ahead as in other years, but be determined by the games played to date.

What has happened to FIFA competitive gaming?

On March 13, EA confirmed that it was suspending all EA SPORTS FIFA 20 Global Series events until further notice This includes EA-operated events, as well as third-party events run under license from EA and encompasses all live and online events, including the associated qualifiers.

Stage V of the FUT 20 Champions Cup was due to start in Bucharest on April 3, but the entire event has been cancelled. Stage VI remains in the calendar for May 15-17, 2020, but its future is also in doubt. The ePremier League Finals was scheduled for March 27 and 28 with a prize of £20,000 ($23,000) for the winner, but has been postponed indefinitely.