FIFA Ultimate Team (FUT) allows FIFA 20 players to build their dream squads, but incorporates a game mechanic known as chemistry to ensure that people cannot just stick 11 players into a lineup to create a super team.

Chemistry is one of the most confusing aspects of the game for beginners when they first start their FUT adventure, but, when understood correctly, it can allow gamers to build hybrid teams that include multiple high-rated players - even putting Cristiano Ronaldo and Lionel Messi in the same XI.

Bad chemistry has a negative impact on your team and actually can make players perform poorer than their ratings, while high and maximum chemistry gives a boost to ratings, even making players sprint quicker and shoot and pass the ball more accurately.

What is individual player chemistry?

Each player in the starting XI receives a chemistry score between one and 10. This is determined by the players immediately around them on the pitch as well as their position in the lineup. The chemistry benefits from these factors are indicated by three colours: red, orange or green.

Position change cards can be bought to improve the position score of a player, e.g. turning a defensive midfielder into an attacking midfielder or a left winger into a left midfielder. However, there is no position card available to change a player from one side of the pitch to another, e.g. a left-back into a right-back.

The main determining factor for individual player chemistry is their links with other players on the pitch. Depending on formation, a player will have between two and five links to nearby players. These are indicated by lines connecting the players and follow the same colour scheme as the position indicator: red, orange or green.

The player links are calculated by how many things the player has in common with an adjacent player - from nationality, league and club. 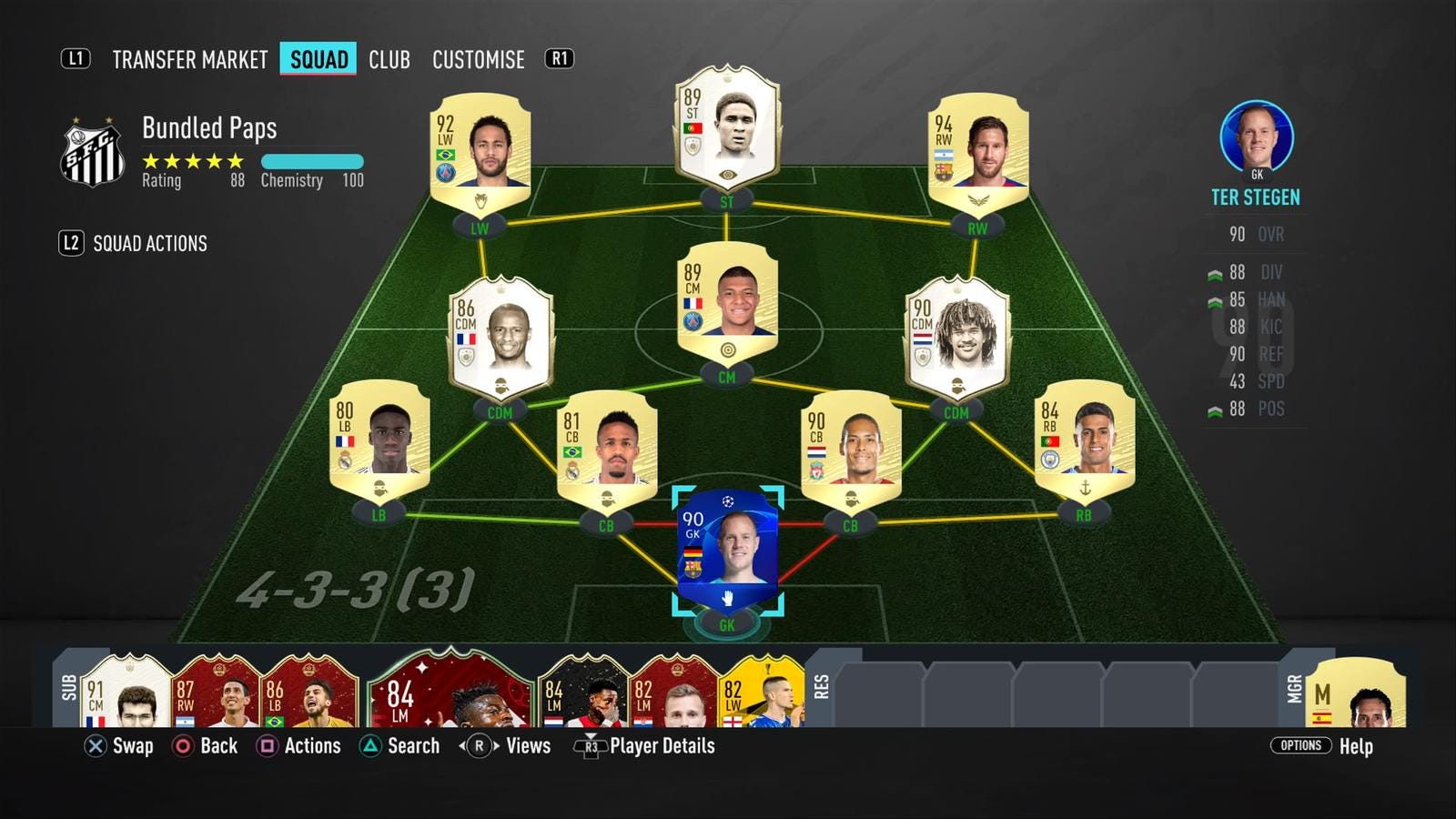 Red indicates nothing in common, orange indicates one thing in common and green indicates two or more things in common. The total links with all adjacent players are then used to calculate the individual link chemistry, using a score made up of -1 for red links, +1 for orange links and +2 for green links.

Icons automatically have an orange link with every adjacent player and green links with players of the same nationality.

Player chemistry can also be boosted by adding a suitable manager to your squad. Managers have both nationality and league attributes, and will give each player a +1 boost to their chemistry if either of these are common traits.

The last thing that provides a +1 boost is player loyalty. This is shown by a coloured shield on each player card. A clear shield indicates that the player has no loyalty and a green one shows that they have full loyalty.

Any player obtained in packs or through SBCs or Objectives where you are the "First Owner" will automatically have full loyalty, but players bought on the Transfer Market need to play 10 games with your club before they get full loyalty.

What is team chemistry?

After you have built a complete starting XI, connecting players to each other using links and adding a manager, your team will be given a total chemistry rating out of 100.

The calculation for this is simple - add all the individual player chemistry scores together to make a total. As a result, you can get a team chemistry score of 100 without having every player on 10 chemistry. This allows you to build hybrid teams from more than one league or country. 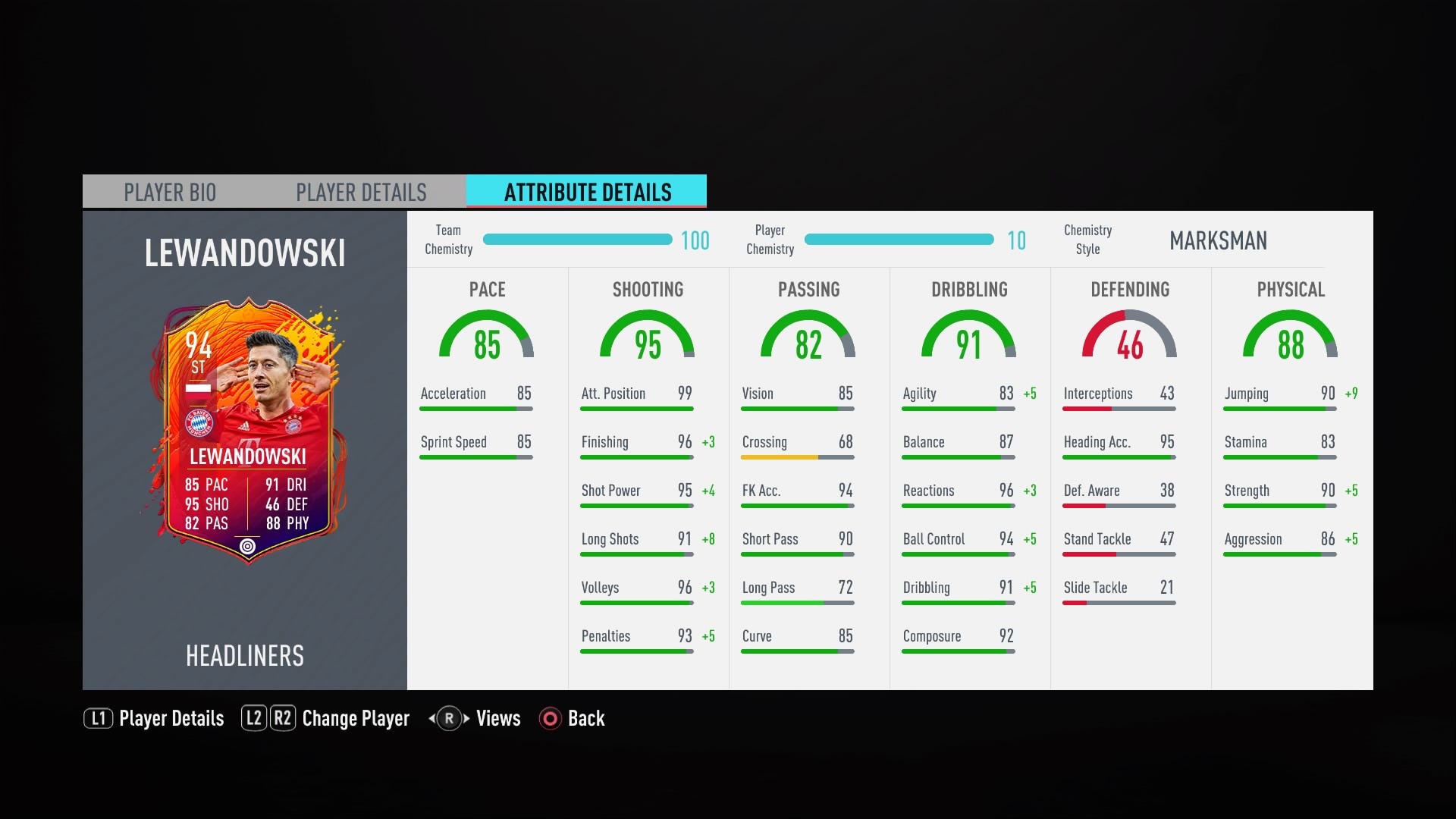 How does chemistry change player quality?

When playing matches in FIFA 20, both the team chemistry and individual chemistry are used to calculate what boosts the player receives. The following formula is used to determine what boost is applied to their attributes:

If this number is over 50, players will receive boosted attributes up to a maximum of 99. A score of exactly 50 does not affect attributes, while anything under 50 sees player attributes actually decrease.

A player with an individual chemistry score of 10 lining out in a team with 100 chemistry will receive the maximum boost, as seen in the example calculation below:

A player with an individual chemistry score of 7 lining out in a team with 100 chemistry, receives a boost to their attributes but this will be less than the maximum score, as seen in the example calculation below:

What chemistry ratings do substitutes have?

As substitutes are not assigned individual chemistry ratings like players in the starting XI, they are automatically given a Player Chemistry score of five, regardless of what links they may or may not have with the rest of your team. As a result, both Messi and Ronaldo would get the same score coming off the bench for a team built entirely of La Liga players.

The calculation is the same as the formula for players in the starting XI, but will see each substitute only receive a small boost to their attributes because of their default Player Chemistry score of five. This is indicated in the example below where Team Chemistry is 100:

Which attributes does chemistry boost?

Each player has a chemistry style applied to them, as indicated by an icon at the bottom of every card.

New players have the Basic chemistry style applied, which will boost attributes in all six areas: Pace, Shooting, Passing, Dribbling, Tackling and Physical.

Other chemistry styles focus on two or three of these areas and provide more significant boosts to a few specific attributes than the Basic chemistry style, which applies small boosts throughout many attributes.