From boom to bust: What happened to Oscar, Tevez & the Chinese Super League's spending spree? 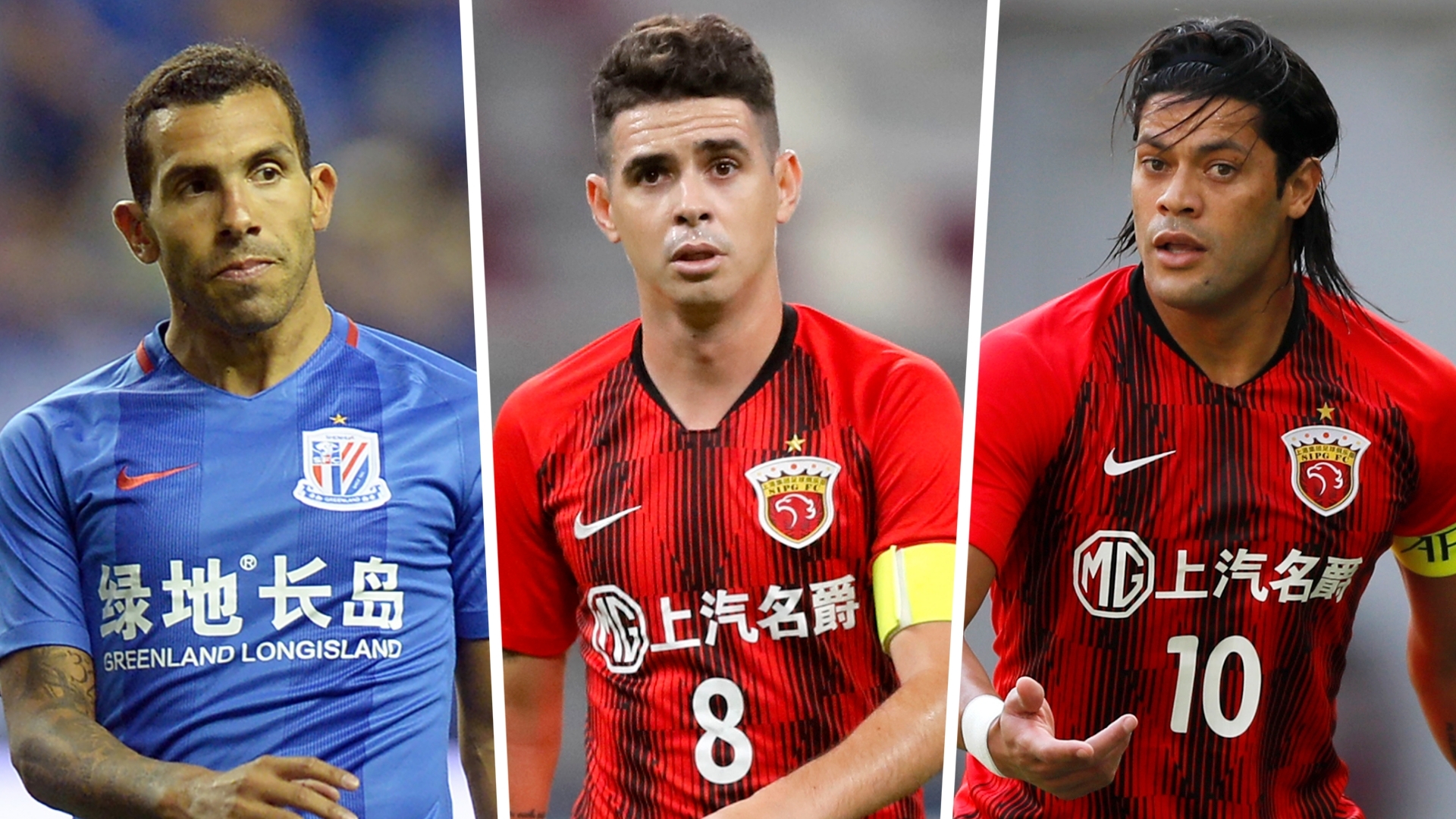 When Chinese Super League clubs broke the Asian transfer record five times in the space of a year, it seemed that a major new player had entered the market.

The deals involving Ramires, Jackson Martinez, Alex Teixeira and Hulk had all generated headlines, but it was Oscar's £60 million ($82m) move to Shanghai SIPG at the end of 2016 that really grabbed the attention of the football world.

The Brazil international was 25 at the time and playing for Premier League giants Chelsea. Inter, Juventus and AC Milan had all been interested in the attacker's services, while Atletico Madrid thought they had done enough to convince him to move to Spain.

In the end, though, Oscar accepted the massive salary on offer from Shanghai, freely admitting that the prospect of setting his family up for life had played a major role in his decision.

Then-Chelsea manager Antonio Conte was surprised but understanding, and he felt more European-based footballers would soon follow in Oscar's footsteps.

“The Chinese market is a danger for all,” the Italian told reporters. “Not only for Chelsea, but all the teams in the world."

Five years on, though, Oscar remains the most expensive player in Chinese Super League history. There have been several notable signings since 2016 – but none over the past 18 months.

The Chinese market once so feared by Conte has collapsed, along with several top clubs. Indeed, the new season will begin on Tuesday without the 2020 champions, Jiangsu Suning, who folded last month.

The club game has been struck by a devastating financial crisis. Consequently, top foreign talents such as Oscar are no longer arriving in China; on the contrary, they are now leaving in droves.

A competition that once looked capable of challenging the Europe-centric nature of the global game now faces a fight to retain relevance within its own country.

But why? What has happened to Chinese Super League? And can it recover?

Oscar's transfer was interpreted as the clearest sign yet that the Chinese government's goal to turn the country into a "soccer powerhouse" was well on track.

China's football-loving president, Xi Jinping, had already introduced a raft of initiatives designed to boost the game's popularity, including making the sport a part of the school curriculum in 2014.

The following year, the government published a 50-point plan proposing a raft of changes at every level of the football pyramid.

Central to the project was a pledge to "professionalise" the Chinese Football Association (CFA) and radically alter the perception of a domestic league that had been severely damaged by scandals during the previous decade.

The ultimate aim, though, was to create a strong and powerful national team, given China had qualified just once for the World Cup, in 2002.

This is a key point, given the acquisition of overseas stars quickly came to be viewed as detrimental to the development of local talent.

Indeed, just ahead of Oscar's first CSL season, it was announced that only three foreign players could feature in one game, and that each 18-man squad list would have to contain at least two Chinese Under-23s, one of whom had to be a starter.

The rules changed again for the following season. The amount of foreign players a club could have on its roster was reduced from five to four, and the amount it could have under contract dropped from seven to six.

However, there were other, even more significant, factors in the reduction in high-profile arrivals from overseas.

The initial splurge may have been allowed to continue, perhaps on a smaller scale, had every stellar acquisition proved value for money.

Though while there were numerous success stories, such as Paulinho, who managed to secure a Brazil recall and a move to Barcelona thanks to his performances for Guangzhou Evergrande, the CSL was undermined by the perception that it was being taken for a ride by foreign players looking for to make a quick buck.

Indeed, Carlos Tevez literally referred to his time in China as a "holiday". Shanghai Shenhua had made the Argentine the highest-paid player in the world when they signed him from Boca Juniors at the tail end of 2016, yet he scored just four goals in 16 appearances and was accused by coach Wu Jingui of being "overweight" during his one and only CSL campaign.

Even Oscar admitted immediately after joining Shanghai SIPG that his plan was always to return to Europe "in two or three years' time" to resume playing at "a high level".

Hardly surprising, then, that there was a growing perception that money was being wasted on overseas players who were doing little to justify their exorbitant wages, let alone aid the development of local players.

So, in a bid avoid a repeat of the spending sprees of the previous two years, a new 'tax' was introduced in 2018 that stipulated that any club that spent more than £5m ($7m) on an overseas player would have to make a payment equal to the size of the transfer fee to the CFA.

Essentially, a CSL side would end up having to pay double the price they had agreed with a selling club, and that served as a massive deterrent to big-money signings.

The economic crisis created by Covid-19 only made expensive stars even less appealing.

A number of CSL clubs were owned by real-estate companies who had previously been willing to spend big in the transfer market for two reasons: they were flush with cash during a golden era for the industry; investing in football was seen as a way to curry favour with the government.

However, their willingness to pump more money into their respective clubs was negatively affected by the government's insistence on the "de-corporatisation" of club names – an idea first raised in 2015 and finally brought into effect for the 2021 season.

The pandemic, then, merely removed what little desire the owners had left to continue investing in their clubs.

In February, Suning announced that it would "close and cut down" businesses "irrelevant" to its retail empire. Just two weeks later, Jiangsu ceased operations, meaning the reigning champions would not defend their title.

Unsurprisingly, the season will now kick-off to less fanfare than usual, with many fans disillusioned by the state and quality of their national league.

Oscar may still be there, but the likes of Hulk, Jackson Martinez, Yannick Carrasco, Axel Witsel, Marek Hamsik and Gervinho have long since departed.

And they are unlikely to be replaced any time soon, following the introduction of a salary cap in December 2020 which means that foreign players can earn no more than £2.6m ($3.6m) a season.

The focus now is to create a financially sustainable league whose primary purpose is to produce top-quality young players for the national team and, given its sheer size, China could yet achieve its goal of becoming a "soccer powerhouse".

But it will require time and patience. There will be no quick fix, no excessive spending for short-term gain.

The net result is that CSL clubs are no longer in a position to pay big transfer fees or massive wages, meaning the days of superstar signings are already over.

Back when Oscar joined Shanghai SIPG, Conte felt that the Chinese clubs and their massive spending sprees represented a clear and present danger to European dominance of the global transfer market.

In the end, though, the CSL's big spenders only ended up hurting themselves.