Frank Lampard has been impressed with the backing he has received from Chelsea owner Roman Abramovich after securing the £47.5 million ($59m) signing of Timo Werner on the back of a £37m ($46m) deal for Hakim Ziyech.

Chelsea are looking to close the gap on Liverpool and Manchester City by making full use of the transfer market after making no signings during Lampard's first season at the helm.

The Blues were under a transfer ban last summer and also lost their star player Eden Hazard to Real Madrid in an £88m ($109m) deal, while they struggled to sign anyone in a difficult January market despite Lampard asking for a striker.

After being unable to secure either Napoli's Dries Mertens or Paris Saint-Germain's Edinson Cavani on short-term deals, Chelsea announced in February that Ziyech would be joining from Ajax and this week completed a deal for RB Leipzig striker Werner.

After such high-profile early transfer market moves, Lampard spoke highly of the communication from the figures at the top level of the club, including Abramovich, director Marina Granovskaia and the technical and performance advisor Petr Cech.

"I haven't spoken to him [Abramovich] recently," Lampard told reporters as he explained the dynamic at the heart of transfer decision making at Stamford Bridge. "I speak to Marina a lot and with Petr. We are very joined up and we talk a lot and communication is key in that.

"When you say that I know the owner very well, in the workplace, to a degree, I do. But I also understand what he wants for this club. I played under it, I felt it as a player when he first came here so I get that with my conversations with Marina that's always relayed.

"I want the same [as him]. In terms of his commitment, I think he has shown his commitment regularly to our football club. We have done some business now that will hopefully improve us for next season and we want to keep moving forward.

"One thing I really realised coming into this job, I was here a long time as a player, but as manager people will consistently ask you about your relationship with the board and the owner et cetera.

"I hope that this shows how we've worked together, all of us, with how we work, with recruitment, scouting and all playing our roles, in trying to bring the right players and being joined up.

"So I think we have to be very positive. This is Chelsea Football Club and we want to close the gap and signings like Timo and Ziyech both are nice statements. There are other areas we might want to improve as we go along.

"But there has to be players available in the market that we can get, and we feel confident and comfortable that we can get them at the right price and to fill the right holes and improve us.

"At the moment we're positive with that but now the games have started it's really important for myself, that the players and I focus on trying to finish the season well and then hopefully we can have the excitement of some new players that we know now are coming in to help us next year."

Although expectations have been tempered from their usual levels in Lampard's first season due to the transfer ban, he is under no illusions that Abramovich will expect a return on his investment.

Werner's 26 goals and eight assists in 32 Bundesliga games show his ability to make an impact, while Ziyech has six goals and 12 assists from 21 Eredivisie games this season. The Blues manager was asked whether the pressure will increase from the two new signings coming in.

"Yeah, it probably does, and I get that," he continued. "There's pressure in the Chelsea job whatever. There's expectations to whatever degree; we're a well-supported club, well-followed club and scrutiny is big as we know.

"I will have more pressure on myself. I know this year from within some of the obstacles or the things that we're sometimes working against or with trying to do as well as we can. Of course, bringing in players that we feel are improvements, you have to go and then show that.

"So that will be up to the individuals themselves, and it will be my job as well. So if the pressure ramps up that will be fair enough. We do know that there is a big gap going upwards when you look at the performance of Liverpool and City in the last couple of years. 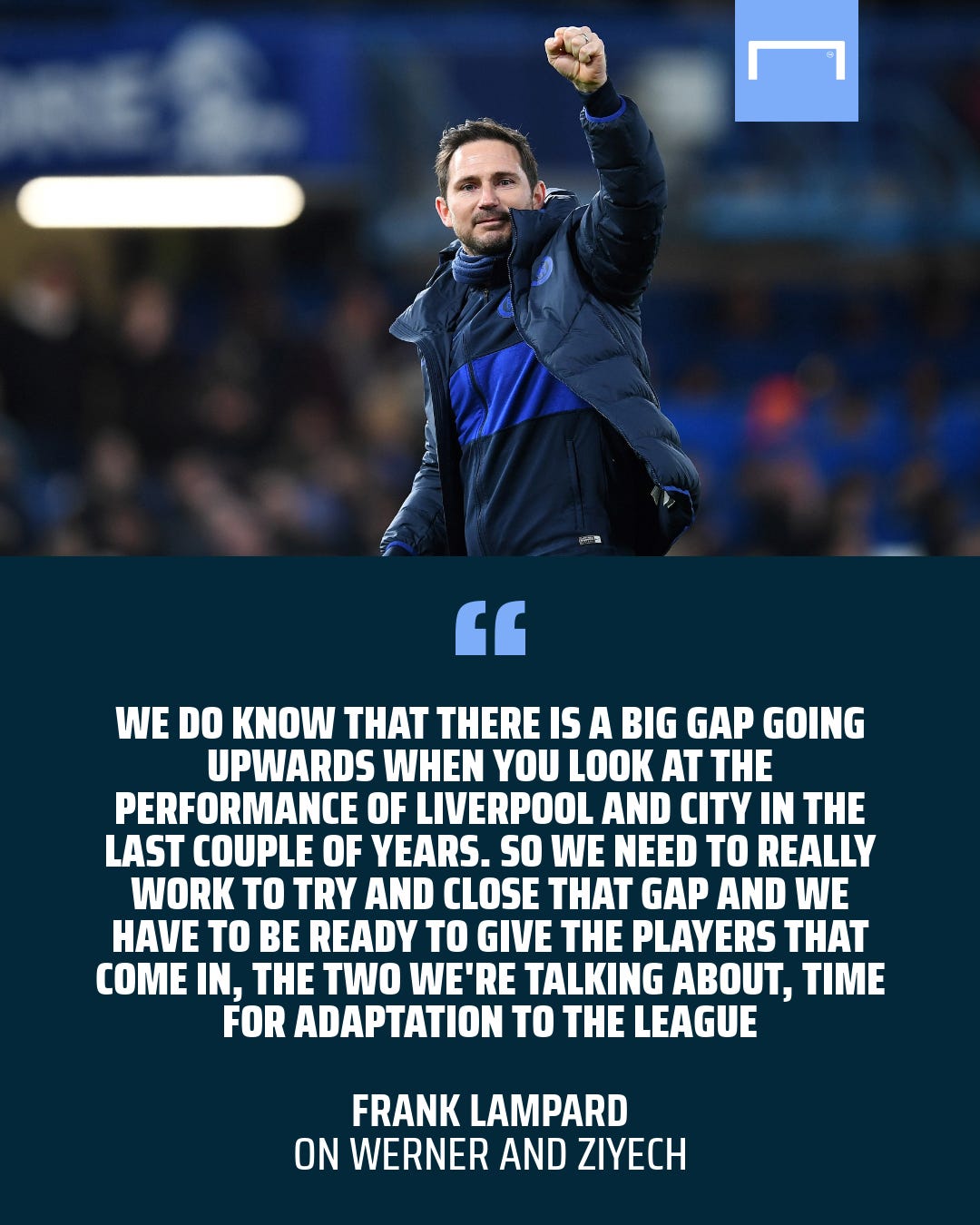 "So we need to really work to try and close that gap and we have to be ready to give the players that come in, the two we're talking about, time for adaptation to the league. We hope it's not that much, we really believe in their qualities, but we want to be working towards closing that gap above us."

Despite having had time to look forward and activate the release clause of two key transfer targets, Lampard is keen not to look too far ahead with nine games remaining this season, beginning at Villa Park with Aston Villa on Sunday.

Having been in the top four since the 1-0 win over Newcastle in October, Lampard is aware that there is an expectation that his side complete the job.

"It is going to be tough and it is hard to make predictions on how many points," he concluded. "You want every point that's on the table and that would get us to the position we want to be in but there's a lot of tough games in that run-in.

"Any run-in would be tough in the Premier League so it is just a battle and we will have to take the games as they come, remain focused on ourselves and not try and look around too much because if we can focus on ourselves and get the right results, then it can look after ourselves.

"It is going to be a tough battle because you have got teams behind us and around us that are pushing for the same reasons that we are pushing. They have a lot of quality. We are aware of that but we will try and do our best.

"If not, we have to be realistic because of the competition. Then next season, we will try to improve as well as we can in whatever competitions we are in."