Rooting against this U.S. team has come to be seen in some quarters as a patriotic act but it's not going to stop the squad speaking out on issues

No sooner had the U.S. women’s national team clinched the Olympic bronze medal than a statement from the former president appeared.

His comments, though, didn't congratulate the USWNT on its bronze or to offer commiserations for falling to achieve its target of a gold medal. Instead, Donald Trump took delight in the USWNT falling short in Japan , spouting off about the “Leftist Maniacs” and “wokesters” that comprise the team.

Why Trump waited for a U.S. victory to release his screed rather than after their semi-final defeat to Canada is a different question. Perhaps he was just as surprised as the rest of us that the U.S. actually lost.

Trump’s statement, and the celebrations from certain quarters over the USWNT’s defeat, hardly came as a surprise. The USWNT has become a polarizing entity in recent years, to the point where rooting against an American team has become a patriotic act for some.

Though the USWNT has been filled with outspoken figures since its inception, the current iteration has felt particularly unrestrained – especially “the woman with the purple hair” as the former president calls Megan Rapinoe.

The team’s new wave of activism can trace its origins to 2016, when Rapinoe made worldwide headlines by following NFL star Colin Kaepernick and kneeling for the U.S. national anthem.

The backlash to the two athletes was swift. Kaepernick was blackballed from pro football. U.S. Soccer, meanwhile, quickly instated a rule requiring its national team players to “stand respectfully” for the anthem.

The tone had been set. Consequences would be close behind any acts of defiance. 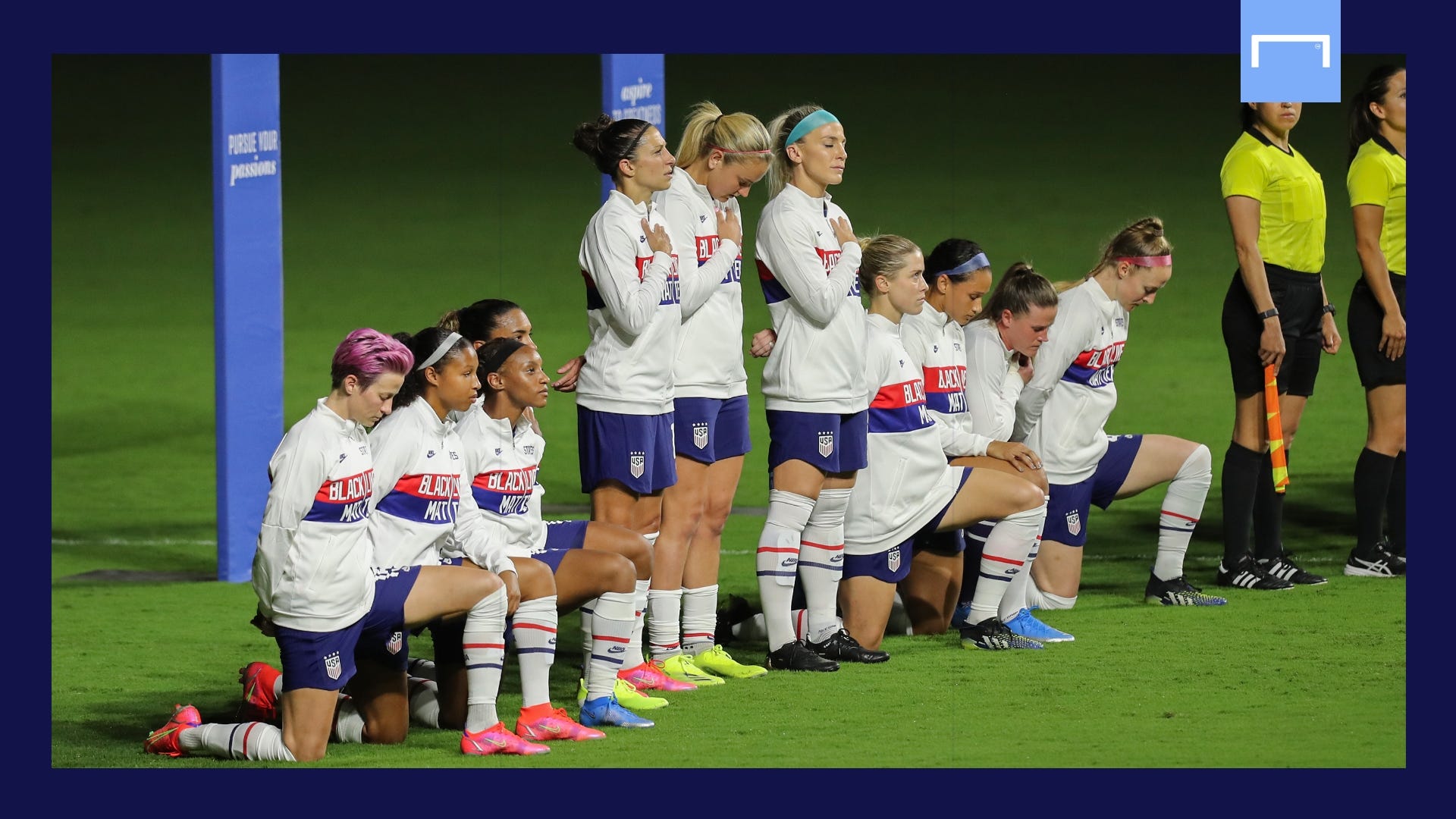 The USWNT is well aware of the spotlight it commands and has opted to use it to further the causes it supports, like racial justice, LGBTQ rights, gender equality, voting rights and more. That leads to increased attention, support, and, naturally, opposition.

“I think the rhetoric surrounding this team has been both divisive and inclusive. I guess it's kind of where we are in politics in this day and age,” former USWNT goalkeeper Hope Solo told Goal on All of Us: The U.S. Women’s Soccer Show.

Perhaps no action has led to more opposition than Rapinoe’s decision to kneel, which prompted U.S. Soccer’s anthem policy that lasted until earlier this year, when it was rescinded in the wake of the protests following the murder of George Floyd.

Not everyone was pleased with the decision to reverse the anthem policy, particularly Seth Jahn, a U.S. military veteran and Paralympian who was booted from the U.S. Soccer Athletes' Council after a tirade that followed the change in the anthem policy.

Jahn’s words came after most –  but not all – of the USWNT had kneeled for the anthem before games early in the year.

“I think the kneeling thing can be very divisive,” Solo added. “I've seen Megan Rapinoe almost bully players into kneeling because she really wants to stand up for something in her particular way.”

Perhaps aiming to avoid internal conflict, the USWNT agreed as a team earlier this year to stand moving forward.

On most other issues, though, the team has been fully united – especially in its equal pay fight. The USWNT has been engaged in a years-long legal battle with U.S. Soccer over pay inequity, but the battle goes much deeper.

By making its case so public, the USWNT is also calling attention to a culture that for too long has disempowered and undervalued women.

That battle against a patriarchal society will continue to create more backlash than the team's specific legal fight over their federation contracts ever will.

That backlash now pervades any actions – however insignificant they may seem – the team takes.

Just take the team’s final pre-Olympics friendly against Mexico this summer. Several of the team’s players turned away from World War II veteran Pete DuPre, who was playing the national anthem on his harmonica.

Several online outlets jumped on the USWNT, calling players un-American or worse for turning their back on a war hero. But the players were merely facing the flag, which was positioned on the opposite side of the field. Many fans did the same. It was a non-story that traveled far and wide around the American media ecosystem.

“I think that's really hard being on the main stage right now with so many political issues for athletes, there's a lot of pressure,” Solo said.

With so many eager to mobilize against this team, there’s no doubt the culture war is set to continue. The USWNT will be ready, as usual, to fight back.