Cristiano Ronaldo has received a transfer invitation from Udinese after spending much of the summer pushing for a move away from Manchester United.

WHAT HAPPENED? The Portuguese forward was eager to find a way out of Old Trafford during the last window as he sought to remain on a Champions League stage and in contention for major silverware. No deal was done, forcing the five-time Ballon d’Or winner to stay put, but the former Juventus star has been asked to consider a return to Italy by Udinese goalkeeper Marco Silvestri.

Ronaldo has stated on his future: “My ambition is great. I want to be present at the World Cup and European Championships. I feel very motivated. My journey is not finished yet.”

Reacting to DAZN sharing those comments, Silvestri said: “Come to Udinese.” That message drew a response from the Serie A outfit, as they posted an eye emoji. 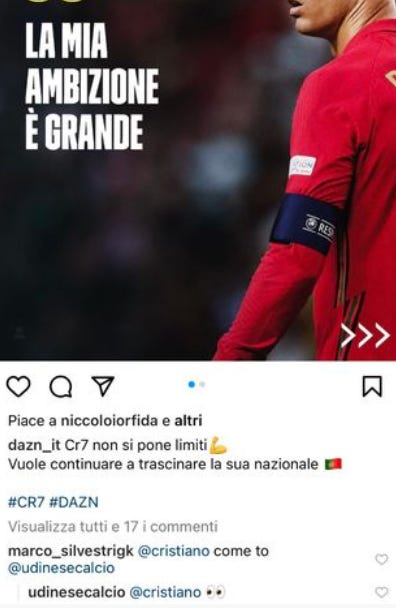 THE BIGGER PICTURE: Ronaldo has been struggling for starts since seeing exit routes blocked off in Manchester, but his goal account for the 2022-23 campaign was opened when recording a first Europa League strike of his remarkable career.

WHAT NEXT FOR RONALDO? The all-time great is only under contract at Old Trafford until 2023, so will either drop into the free agent pool next summer or make another bid to sever ties with United during the January transfer window.