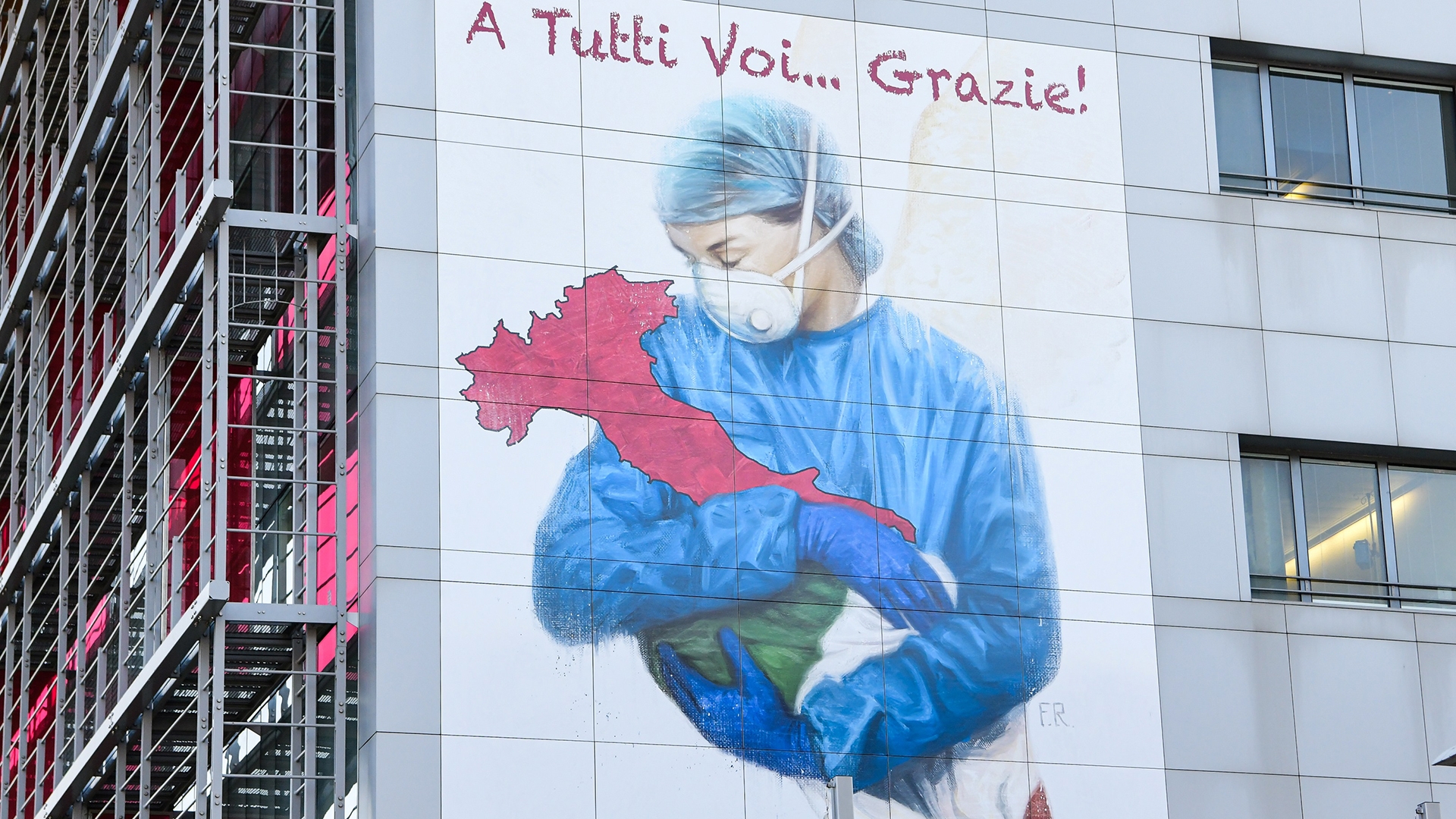 Just over a month after the thrilling 4-1 rout of Valencia at San Siro, Bergamo has been devastated by the spread of the deadly virus

"It's been a wonderful night; a beautiful dream," Atalanta captain Papu Gomez told Sky Sport Italia immediately after his side's exhilarating 4-1 win over Valencia before 40,000 ecstatic Bergamaschi at the Giuseppe Meazza.

"To be honest, I didn’t expect all these people to be here from Bergamo, it’s fantastic, unique and will remain with us for all our lives."

Unfortunately, just over a month on, that Champions League last-16 first-leg clash has already been cast in a very different light.

That night, a disbelieving crowd hugged and high-fived one another as they watched Gomez, Josip Ilicic and Hans Hateboer tear Valencia to shreds at San Siro.

It is now believed that in celebrating that night together, those fans unintentionally played a part in the spread of Covid-19, the deadly virus that is now devastating both Bergamo and Italy, where the total number of deaths has already surpassed 4,000.

Indeed, Atalanta-Valencia is now being referred to as 'Partita Zero' (Game Zero), a "biological bomb" that exploded at San Siro, according to the head of the pulmonology department in the city's main hospital.

Immunologist Francesco Le Foche agrees, telling the Corriere dello Sport on Thursday "It’s probable that there were several major triggers and catalysts for the diffusion of the virus, but the Atalanta-Valencia game could very well have been one of them.

"A month has passed since that match, so the timing is pertinent. The aggregation of thousands of people, centimetres from each other, engaging in manifestations of euphoria like hugging, shouting, all of that could’ve favoured viral reciprocation.

"I have to imagine many didn’t want to miss that game if they had tickets, even if they felt a slight fever. With hindsight, it was madness to play with a crowd present, but at the time things weren’t clear enough. It’d be unthinkable now."

At the time, though, there was only mild concern about the outbreak, which was still centred on the Chinese province of Wuhan. Patient One had only been detected in Codogno – the first Italian town in quarantine – two days before.

As Atalanta wing-back Robin Gosens outlined, nobody had yet fully grasped the threat posed by playing a game at San Siro that would attract a third of the population of Bergamo.

“We all underestimated it, Covid-19, myself included," the German admitted to the Gazzetta dello Sport. "I told myself that it was at best a flu. I went out, went to the restaurants, met my friends.

“We didn’t know about this enemy and the capacity of it. We understood it only when there were already many cases."

By the second leg in Valencia, the virus had really taken hold of the north of Italy, with Bergamo hit particularly hard.

There were doubts over whether Atalanta would even be allowed to travel to Spain yet the game went ahead, albeit behind closed doors.

The Dea booked their place in the quarter-finals with a typically thrilling 4-3 win, progressing 8-4 on aggregate, and as the players gathered in the centre circle at full-time in an empty Mestalla, they unfurled a small banner for those watching back home:

"Bergamo, this is for you. Never give up."

The tribute was enthusiastically received. Just like their victory.

Before the game, they had received messages of support from the mayor of Bergamo and even the director from one of the many local hospitals beginning to struggle with the staggering increase in cases of coronavirus.

They had sought some relief from the health crisis now facing them, and their team had delivered.

"They have gifted us two hours of entertainment and joy,” enthused Atalanta president Antonio Percassi.

“They gifted them to Bergamo and Italy in such a difficult and delicate moment due to a horrific virus that is shaking our lives."

The game should never have gone ahead, though. As Gosens quite legitimately asked, why had they bothered to play the game behind closed doors if they weren't going to block Valencia fans from assembling outside Mestalla?

Atalanta supporters, who had touchingly donated all of the money spent on tickets for the away leg to a hospital in Bergamo, heeded warnings not to greet their team at the airport or celebrate their historic success in the city centre.

However, by then, the damage from playing the first leg in front of fans was already being felt. Playing the return fixture only exacerbated the problem in Valencia, where 35 per cent of the club's staff ended up testing positive for coronavirus.

Whether everyone involved contracted Covid-19 in Milan, Mestalla or elsewhere was impossible to determine. What was clear, though, was the games should have been scrapped.

As it was, Gian Piero Gasperini and his players returned to a very different country from the one they had left.

“We arrived around 3:30 AM on the Thursday and I immediately realised that we have been plunged into a reality that we knew was terrible, but not at this point," the coach told the Corriere dello Sport on March 12.

"The evolution since Sunday has been significant. It was one world four days ago, another on Monday and today another...

"Plague, it’s like the plague. Our life has changed."

Gasperini, his coaches and his players are now confined to their homes and wake up every morning to news of more cases and more deaths and newspapers like the L’Eco di Bergamo now made up mostly of obituaries and images on television of military trucks transporting coffins from overwhelmed morgues to the city's crematoriums.

And yet there are those who are still not responding to the nation-wide lockdown, much to fury of Gomez, so the virus is still spreading, with some virologists speculating that it may even have mutated in Lombardy, thus making it even more deadly and difficult to counteract.

"There’s something in Lombardy that we cannot quite comprehend," Maria Rita Gismondo of the Sacco hospital in Milan told the AdnKronos news agency.

"It surpassed the number of deaths in China in an infinitesimally smaller area and in less time. Something strange is happening."

Consequently, it's not known when all of this will be over. Let alone when Atalanta can return to action.

All we know is that the club, its city and its people were living a beautiful dream just over a month ago; now they feel trapped in a never-ending nightmare.