The prolific Norwegian seems perfect for Pep Guardiola's striker-less side, but the 21-year-old has been plagued by muscular problems this season

It seems that even Erling Haaland has grown weary of the incessant speculation surrounding his future.

During the most recent international break, he asked Norway coach Stale Solbakken to be excused from media duties.

"I see no reason not to respect that. When we meet next time [in June], Erling will be sitting here answering questions from you. Then that saga will be over."

That "saga" should actually end long before the summer, with Manchester City imminently expected to confirm Haaland's summer switch to the Etihad Stadium.

It will come as a relief to everyone involved.

Having missed out on some high-profile transfer targets in the past, City will be ecstatic to have landed one of the most exciting young talents in world football; a potential generational talent.

Indeed, it is presently impossible for the club's fans not to get excited by the prospect of Pep Guardiola adding a prolific centre-forward to a team overflowing with creative attacking talents.

Dortmund will also be glad to see the back of the media circus that has surrounded Haaland since he joined from Red Bull Salzburg just over two years ago.

They would, of course, have loved to have held on to Haaland, to have built a team around him for the next 10 years, but that was just never going to happen.

Manchester City have agreed personal terms with Erling Haaland and could complete a deal in the next week, according to the Daily Mail 👀 pic.twitter.com/PXy1HJnhlw

They knew right from the start that Mino Raiola had a very specific career path in mind for his latest prodigy, and Signal Iduna Park was little more than a stepping stone.

All they requested was that his inevitable move be finalised as quickly as possible and with the minimum of fuss, which is why they set a deadline for this whole affair to be concluded.

"We are in talks, but there is nothing more to say about it for now. I don't want to open some new talking points about Erling. We have a very good, trusting relationship.

"But the sooner there is a decision, the better it will be. And I hope it will be timely."

Obviously, €75m is not a lot of money in the current economic climate for a 21-year-old who has broken one Champions League record after another since exploding onto the scene at Salzburg, and scored a ridiculous 82 goals in 85 appearances for Dortmund.

In truth, the transfer fee looks like a bargain for a potential generational talent.

However, the true cost of any deal for Haaland would be far higher when his salary demands (€50m gross per annum) and agent fees (potentially as high as €70m) are taken into account.

And that is why, as GOAL revealed earlier this week, Real Madrid are no longer fully convinced of the merits of signing Haaland.

Real Madrid aren't willing to agree to the conditions from Erling Haaland's agents, as they don't want to anger any current players who would earn less than Haaland 😳 pic.twitter.com/4ZuX2iCLoN

Firstly, they do not want to run the risk of the salary of one young player destabilising a dressing room full of proven performers.

Secondly, Madrid are concerned by the number of niggling injuries Haaland has sustained this season.

This, remember, is a club that in recent years has been badly burned by superstar signings blighted by fitness problems, namely Gareth Bale and Eden Hazard.

Florentino Perez, for all his fondness for making grand statements in the transfer market, does not want to break the bank for another player who could end up spending more time in the treatment room than on the pitch.

At this stage, of course, it must be stressed that there is nothing to suggest that Haaland is set to be plagued by injuries for the remainder of what should be a glorious, goal-laden career.

However, given the money involved, Madrid's concern is unsurprising, and not only because of Haaland's fitness issues this season, but also the way in which they are being handled and discussed at Dortmund.

One thing that should be pointed out straight away is that Haaland is hardly an anomaly at Dortmund this season.

Marco Rose's squad has been decimated by injuries in 2021-22, which helps explain why they are nine points behind Bayern Munich in the Bundesliga, failed to get out of their Champions League group, and were subsequently knocked out of the Europa League by Rangers.

What's more, they have suffered an unusually high amount of muscular problems, but although they have looked into the matter in the hope of finding an explanation, they can see no pattern.

Dortmund insist that each injury must be viewed in a separate light, on a case-by-case basis.

In Haaland's case, he has been sidelined three times by muscular problems, missing 10 games in total. 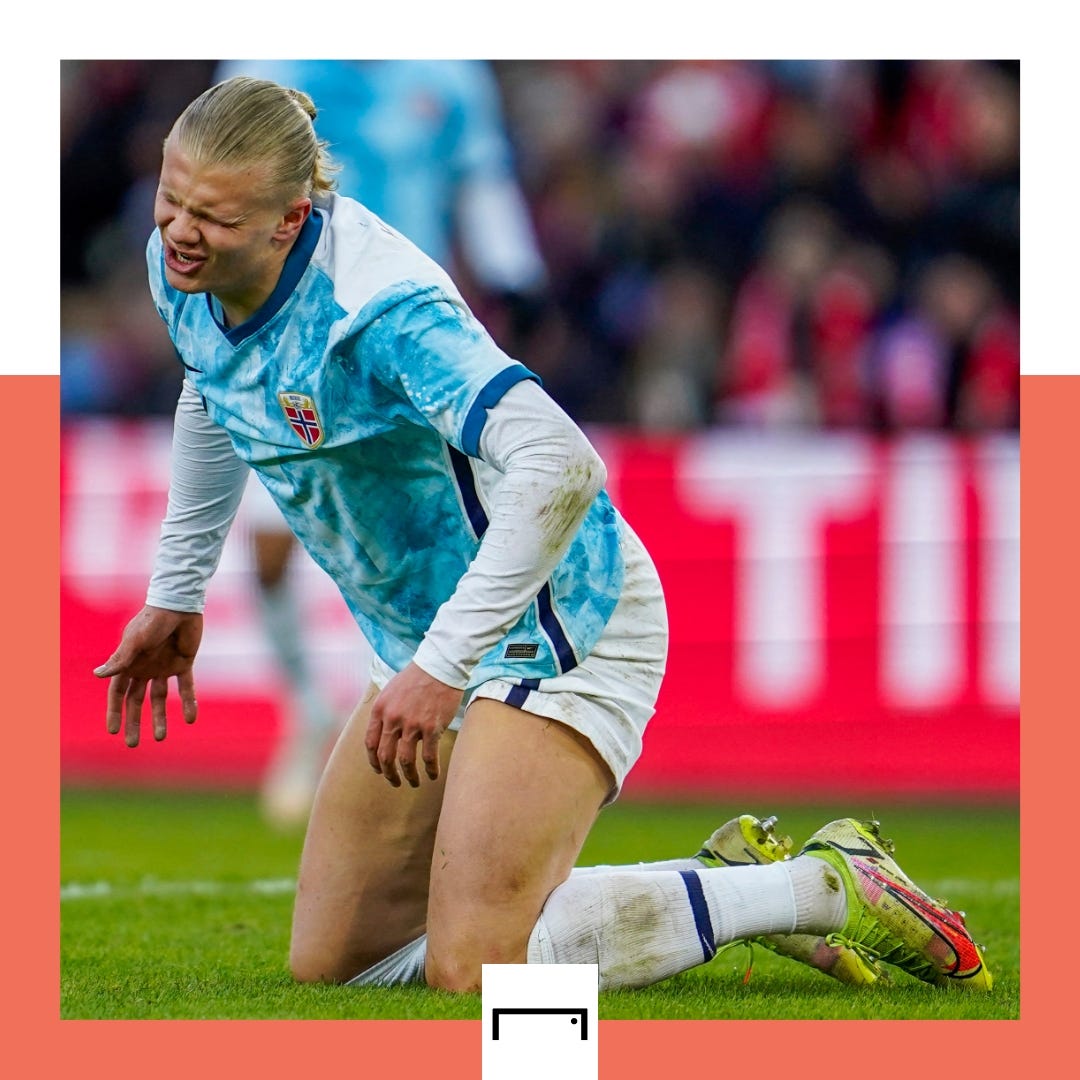 He also picked up an ankle knock on international duty, which forced him off at half-time in Norway's 9-0 rout of Armenia on March 29.

Haaland hasn't missed a second of game time since returning to club duty, playing all 90 minutes of this month's Bundesliga meetings with RB Leipzig, Stuttgart and Wolfsburg. He even ended a five-game goal drought in the 6-1 rout of the latter.

However, Rose raised eyebrows last week while revealing that Haaland might have to take a painkiller to play against Wolfsburg.

"Erling can't be pain-free yet," he told reporters. "I was sent a photo [of the ankle injury sustained against Armenia]: the foot was at a 90-degree angle to the leg. That means that something must have got broken there.

"Erling tried very professionally to deal with the swelling and got it fixed by the next game.

"But he might take a little tablet before the match. Then, it should be okay."

Rose's comments did not go down well at Dortmund, with Kehl calling them "a bit unfortunate", while at the same time insisting that the club had taken every possible precaution in terms of Haaland's health.

"Erling always wants to play," he explained, "and [the medical team] always tries to make the right call in conjunction with him."

The exact nature of the ankle problem remains unclear, though, and, again, Rose's take on the issue only added to the confusion, with the coach seemingly revealing that Haaland had refused to undergo an MRI scan.

"You work out with the player how to deal with an injury, whether to do x-rays or not," he explained.

"It's not like we can put the boy in the tube (closed MRI scan machine) if he doesn't want to."

Rose tried to clarify his comments on Thursday, arguing that they had been blown out of proportion, albeit without actually denying that Haaland had refused the MRI.

"If someone wants to make more of this than it actually is, then we have to be more discreet about injuries in the future," he stated.

"I would like us all to deal with such things responsibly and not make unnecessary stories out of it."

It was too late for that, though, with German newspaper WAZ claiming that Haaland's alleged reluctance to have the precise nature of the ankle problem disclosed to the public could be linked to a fear of jeopardising his summer transfer.

At this stage, that seems highly unlikely, with his move to Manchester expected to be finalised before the end of the month.

Until then, though, expect Haaland to continue to keep a relatively low profile, particularly with Dortmund facing a massive Bundesliga battle with Bayern this weekend.

Indeed, it's worth remembering that after being excused from media duties while on Norway duty last month, Haaland did nothing other than take to Twitter to explain his stance with a short statement.

He wrote: "I was given advice by a farmer a few years back: let your feet do the talking and everything else will be fine.

"I said okay and walked away."

And he's right, of course. He has essentially found himself at the centre of a two-year transfer saga, with every move scrutinised to the nth degree.

But while uncertainty understandably surrounds Haaland's injury issues this season, as long as he continues making statements on the field, there really won't be a need for him to make any off it.