The two most significant transfers of Juventus' recent history have both been effectively sealed on the field, rather than off it.

It was the remarkable standing ovation afforded to Cristiano Ronaldo by fans in Turin last year which convinced the then Real Madrid superstar that the Bianconeri was the club for him.

Just over a year later, it was the Portuguese doing the convincing.

At the end of his country's Nations League victory over Netherlands, Ronaldo deliberately sought out Oranje defender Matthijs de Ligt – not for a customary post-match handshake or to offer some words of consolation, but to implore him to join him in Turin.

"I didn't understand him at first," the centre-half admitted to NOS. "I was a little shocked, so I laughed, but I didn't say anything.

"Shortly after the game you are not at all concerned with it, you are disappointed you have lost and that is the only thing you are thinking about."

Ronaldo's surprise invite made a huge impression on De Ligt, though. The 19-year-old had, after all, idolised Ronaldo as a child.

"I always wanted to be Cristiano Ronaldo when [my friends and I] were playing football in the garden," De Ligt told VI in May.

"That was especially in his time when he played at Manchester United.

"My first football shirt also belonged to him from that time." 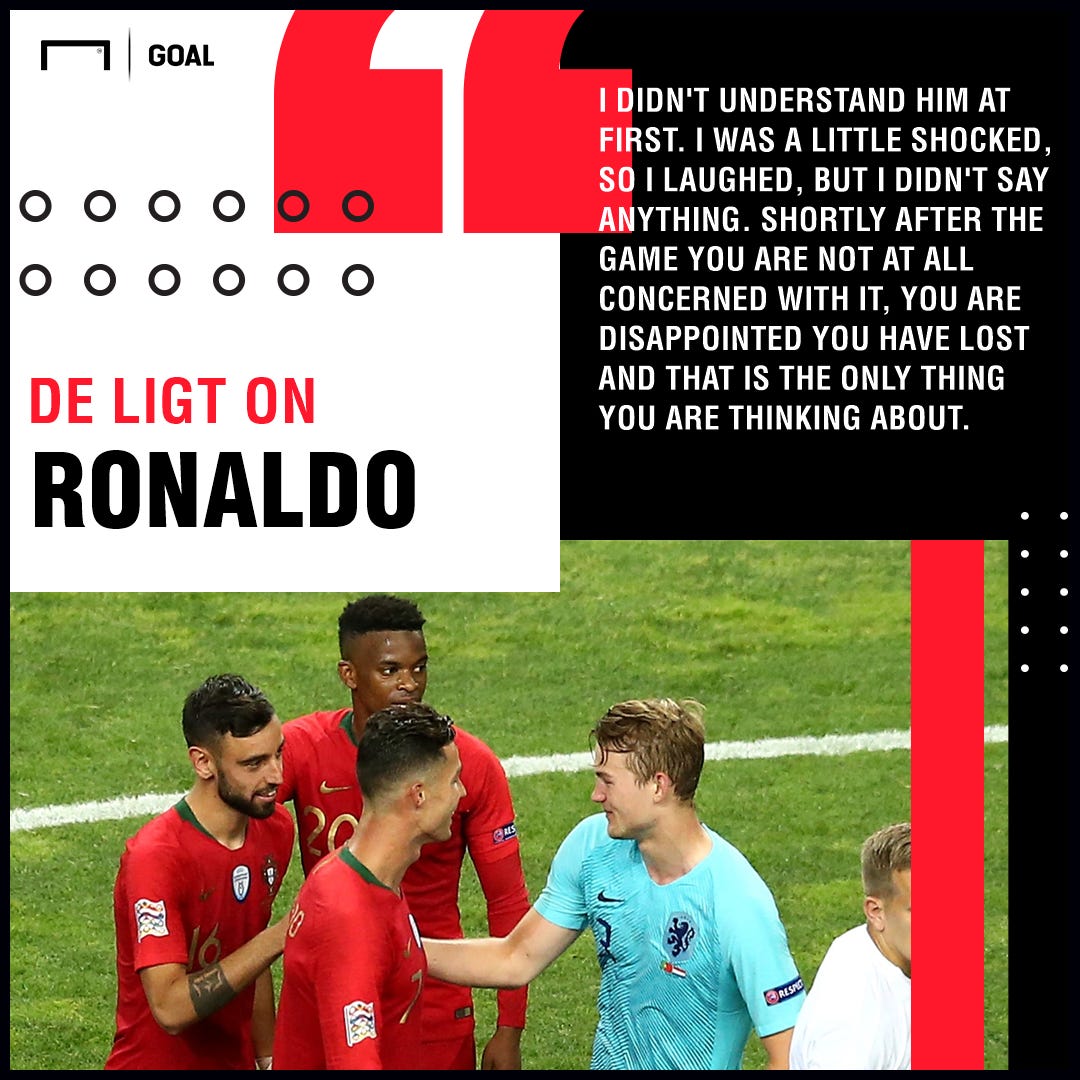 Ronaldo's recruitment drive, thus, played a pivotal role in De Ligt's decision to spurn numerous offers from elsewhere to join Juve, with the transfer set to be confirmed in the coming hours.

Of course, it wasn’t the only factor. Money was also key, as it so often is when super-agent Mino Raiola is involved.

De Ligt's preference was to join Barcelona and the Blaugrana were supremely confident that the Dutchman would follow in the footsteps of his Ajax team-mate Frenkie de Jong in agreeing to move to Camp Nou.

They even offered the defender the same wages: €9 million (£8m/$10m) a year. Both Juve and Paris Saint-Germain were willing to go higher, though.

When Barca refused to raise their offer, feeling that making a teenager one of their highest-paid players ever would have irked some senior members of the squad, their hopes of signing De Ligt quickly receded.

That made it a two-horse race. However, PSG's bid was ultimately derailed by their inability to cede to Raiola's request for a €150m (£135m/$170m) buy-out clause – as such agreements are prohibited in France.

Their eagerness was understandable. They know to their cost just how inspirational a leader De Ligt already is at the age of 19.

Just as Ronaldo ended their hopes of winning the Champions League in 2018, De Ligt did likewise last season, with his towering header sealing Ajax's 3-2 aggregate win over Juve in April.

If you can't beat them, sign them. Not that anyone outside of the club ever truly thought Juve capable of pulling off two such sensational coups in consecutive summers.

The Old Lady, though, have handled both deals beautifully. Both took time, effort and skill.

The Bianconeri had, of course, been courting Ronaldo for years, while an attempt was made last year to persuade De Ligt to move to Turin. 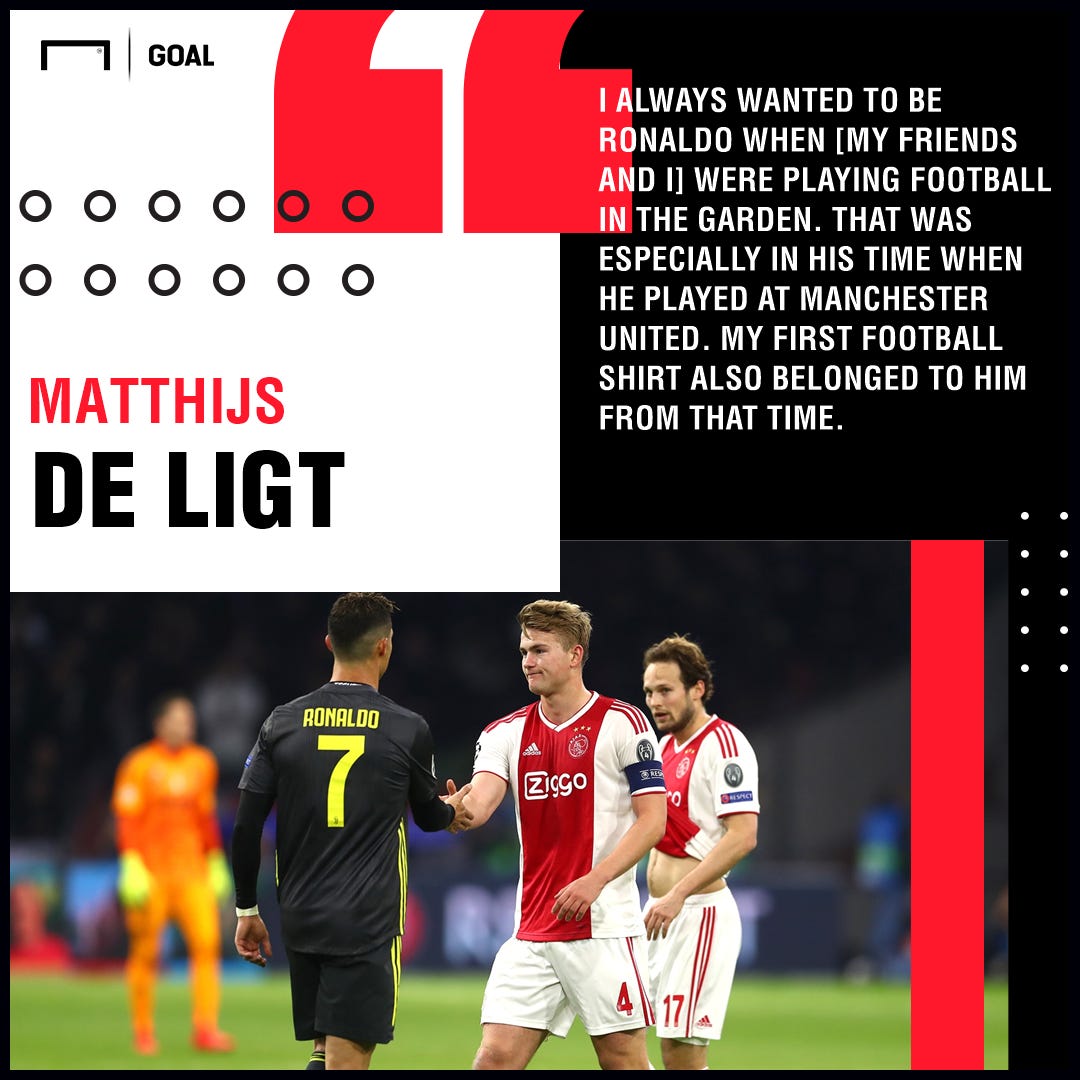 In the end, he stayed in Amsterdam, much to the delight of Ajax, who were thus never going to stand in his way this summer.

The amicable nature of the relationship between club and player is also why De Ligt is valued at just €70m (£63m/$80m) in a market in which Manchester United have just paid potentially €55m (£50m/$63m) for Aaron Wan-Bissaka, a promising full-back but one uncapped at senior international level and with less than 50 first-team appearances for Crystal Palace to his name.

De Ligt, by contrast, is already a regular at the heart of the Netherlands defence alongside Virgil van Dijk, while he is coming off the back of a season in which he captained a delightful Ajax side to the semi-finals of the Champions League.

In that context, €70m should prove a bargain. After all, we are talking about a once-in-a-generation defender who could anchor any elite defence for the next decade.

At the very least, he will immediately rejuvenate the Old Lady’s, with Andrea Barzagli having retired, Giorgio Chiellini set to turn 35 before the start of the new season and the 32-year-old Leonardo Bonucci proving nowhere near as reliable since returning from AC Milan.

Raiola’s insistence on a buy-out clause has understandably unsettled some Juve fans but it will not become active until 2022 and, even in the worst-case scenario, Juve would still double their money should De Ligt elect to leave in three years' time.

Nonetheless, its mere presence in the contract suggests that Juve are merely being used as a stepping stone, most likely towards Barcelona.

It is believed that the presence of more than one world-class centre-half at Camp Nou – in contrast to the Allianz Stadium – also played a role in De Ligt opting against joining the Blaugrana at this particular moment in time.

He would have had to fight for his place in the Barca back four; he will walk into the Juve defence.

However, the Bianconeri will take comfort in the fact that they have acquired the most promising young defender on the market for the foreseeable future, one capable of shoring up a defence badly exposed in the knockout stages of last season’s Champions League.

And besides, even if Barca do come calling again looking for a replacement for Gerard Pique, agent Ronaldo can be once again be employed to have another little word in De Ligt’s ear.