The England international was released by the Gunners at the age of eight, with that snub providing the motivation to become one of the world's best

Tottenham striker Harry Kane admits being snubbed by Arsenal left him determined to prove a point to them and everybody else.

The newest member of the Premier League’s 100-goal club was released by the Gunners at the age of eight.

Kane says he was left with “a chip on my shoulder” after being shown to the door by one north London heavyweight, but quickly set about getting his own back after swapping red for white.

The 24-year-old has become one of the most fearsome frontmen on the planet with Spurs, with Arsenal having inadvertently helped to mould a prolific marksman for fierce rivals and England.

Kane told the Players’ Tribune after becoming a Premier League centurion: “After Arsenal, I bounced around a bit and went back to play for my local team, and then I was spotted by a scout from Watford who offered me a trial.

“It’s funny how things work out, as it was after playing for Watford against Tottenham that I got the opportunity to join Tottenham’s youth academy. The white kit fit better on me, I think.

“I remember the first time we played against Arsenal [for Tottenham’s academy team] and even back then, I had a chip on my shoulder.

“It might sound ridiculous. I was only eight when they let me go, but every time we played them, I thought, ‘Alright, we’ll see who’s right and who’s wrong’.

“Looking back on it now, [being released by Arsenal] was probably the best thing that ever happened to me because it gave me a drive that wasn’t there before. “

"For me, the rejection is the best thing that ever happened to me. I remember walking round the pitch after the final whistle and clapping to the fans and it felt like, ‘well, I told you so’.

“We were in the tunnel, and I thought, ‘Okay took me 12 years, but we’ll see who was right and who was wrong.

“I scored two that day, and the winner in the 86th minute was something that I’d never even dream of visualising before a match. 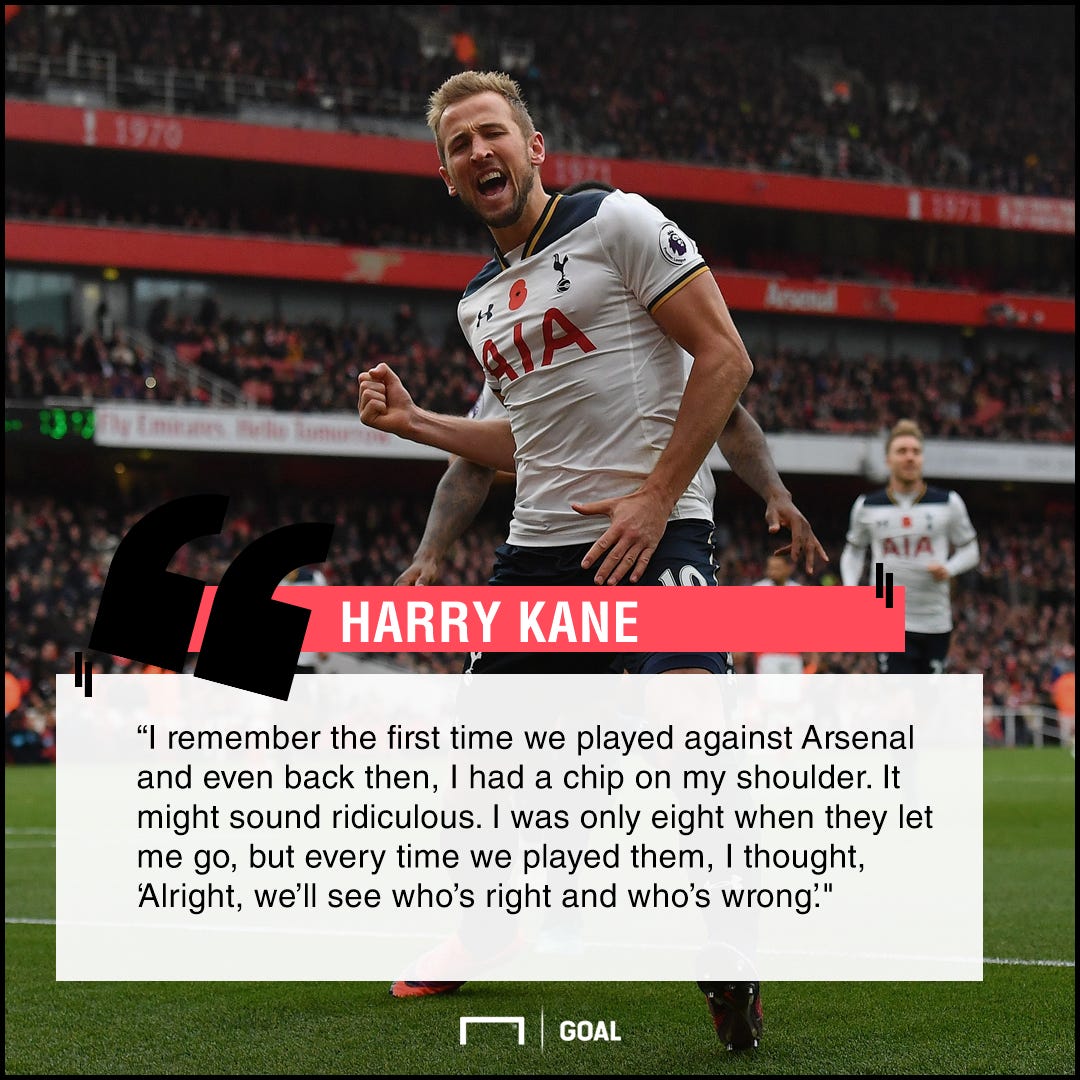 “It was a header, probably the best header I’ve ever scored and that feeling when it hit the back of the net, I’ve never felt a rush like that in my whole career.”

“I dreamed of playing for Spurs since I was a boy. For a long time my motivation was simply to close my eyes and picture myself scoring against Arsenal in the Premier League."

Kane reached 100 efforts in English top-flight competition during a thrilling 2-2 draw with Liverpool on Sunday, with a controversial late penalty taking him to the landmark.

That effort has helped to keep him in contention for a third successive Premier League Golden Boot, while the ultimate aim is to close in on 200 goals as quickly as possible.

"That has to be the aim,” Kane added.

“Hopefully I can get better and better. I am 24 years old, that's not young but it's not old so I've still got a lot of learning to do.