The 19-year-old can no longer be considered merely 'a prospect' - he's part of the Reds' squad now alongside Henderson, Wijnaldum and Co.

It’s been another good week for Liverpool’s academy.

A home-grown captain, two Champions League debutants, a rookie goalkeeper shining on the big stage and yet more evidence, if it were needed, that the future at Anfield is as bright as the present.

“A proud night for everyone,” reflected Trent Alexander-Arnold after the Reds’ 1-1 draw with Danish champions FC Midtjylland on Wednesday.

Liverpool finished the game with five academy products on the field and another four on the bench. Alexander-Arnold, 21, became the third-youngest captain in the club’s history, teenage midfielder Leighton Clarkson made his Champions League debut while half-time substitute Billy Koumetio, at 18 years and 25 days, is now the youngest player ever to represent the Reds in Europe’s top competition.

Big moments, although Jurgen Klopp, naturally, was quick to downplay them afterwards. “It’s a wonderful thing to have your first Champions League game,” he told reporters, “but a career is all about how many you can have.”

Alexander-Arnold, of course, has made the jump, and it looks as though Klopp now has another young Scouser he can call upon.

Because make no mistake, Curtis Jones is here to stay.

Jones was an unused substitute against Midtjylland, but that merely underlines his growing importance. He will almost certainly return for Sunday’s Premier League trip to Fulham.

On current form, he is impossible to leave out. 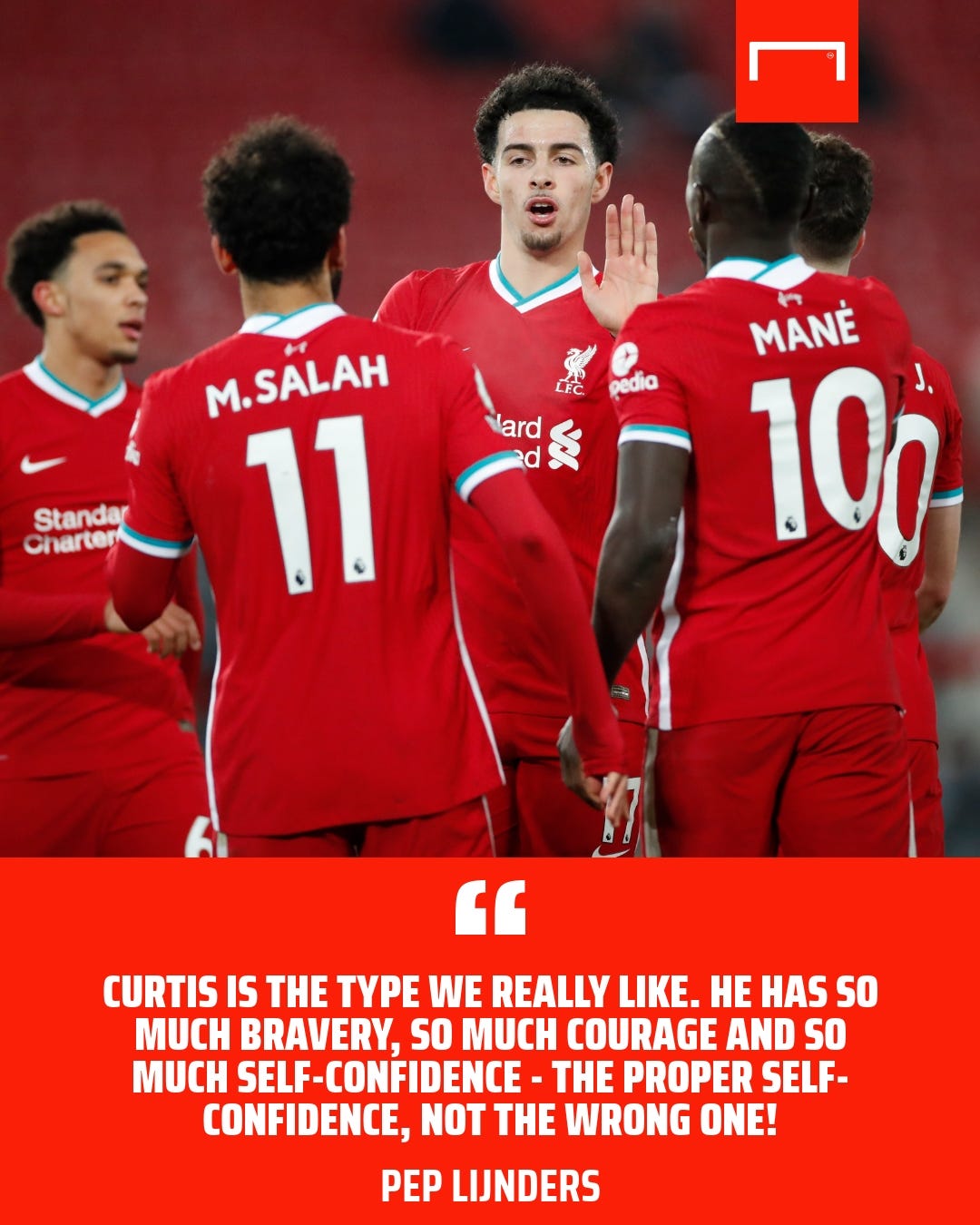 As senior players have fallen, Jones has taken his chance. He doesn’t turn 20 until the end of January, but his maturity in midfield has stood out a mile in recent weeks. He has played, Klopp says, “like a 26 or 27-year-old.”

This week marked the 12-month anniversary of his league debut for Liverpool, and he has gone from strength to strength since. Never mind the future, let’s talk about the here and now.

“Curtis is the type we really like,” says assistant manager Pep Lijnders. “He has so much bravery, so much courage and so much self-confidence – the proper self-confidence, not the wrong one!

“He is probably the most offensive midfielder we have. He is the first one who makes the surprise move in the box from midfield, the first one who shoots. He gives us risk in 1v1s and a last pass like few players we see on the market.”

Jones’ potential has been talked about for some time. He was 15 when he made his debut for the U18s, and he was on the bench for the first team as far back as April 2018.

Steven Gerrard raved about him when he was coaching at the club while Barry Lewtas, the current U23s manager, can only smile when remembering some of the performances he has witnessed on the back pitch at Kirkby down the years.

But to be a Liverpool player, you need more than talent. It requires hard work and devotion, introspection and self-reflection. Harsh words are needed at times, from coaches and from team-mates. It is as much about the bad days as the good ones. 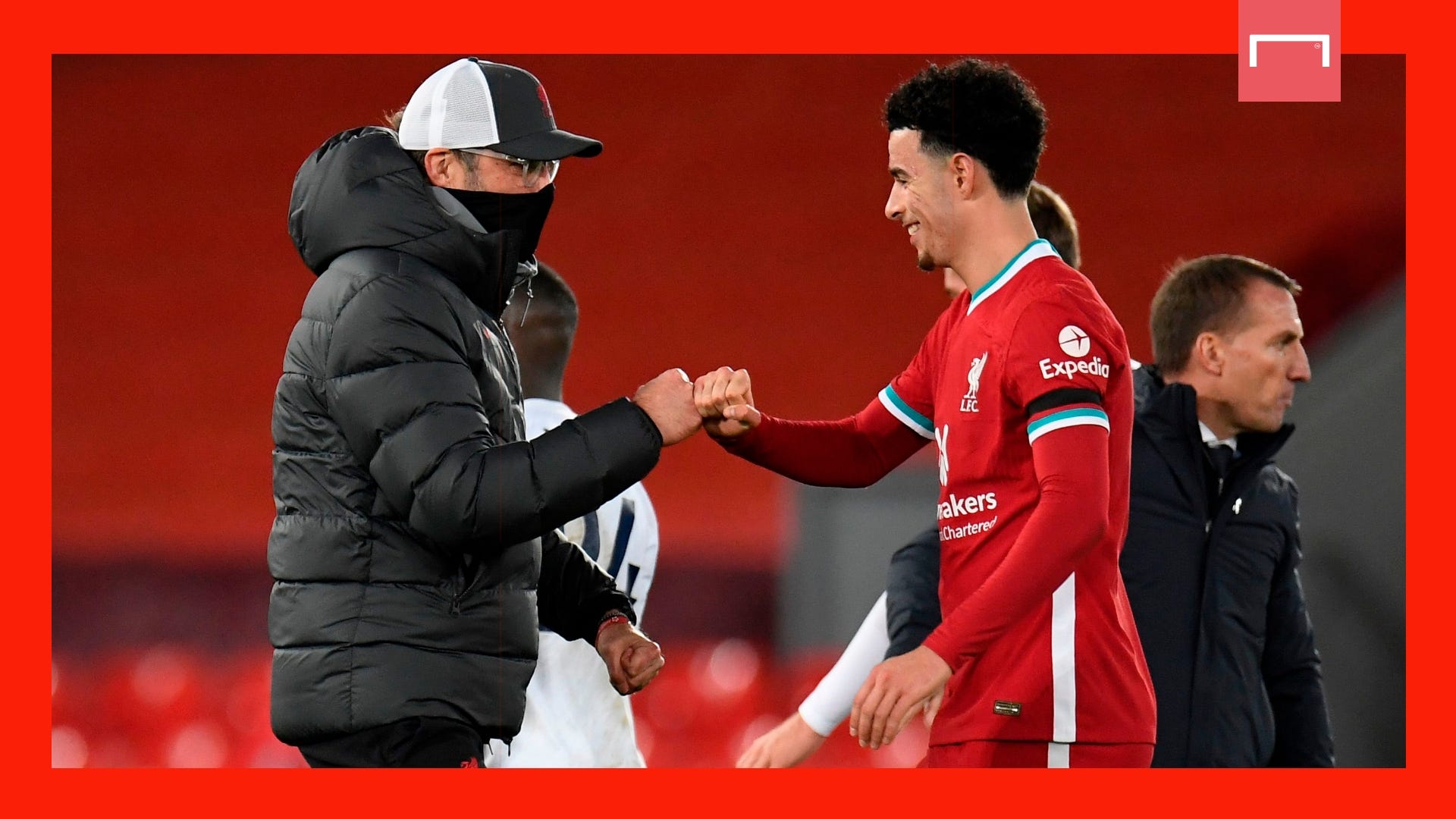 “How can I explain it?” he replied. “When you are the outstanding talent in all of your age groups, as Curtis obviously was, then it’s completely normal that you develop a specific personality – very confident, and nothing can harm me or hurt me, all that stuff.

“That was the kid who came in here. That’s normal. And then you realise in the next moment that a lot of really good players are around you when you join the first team! They are as good or better, most are better because they have more experience.

“In that situation, a lot of talents struggle to adapt, from being the Prince to being a normal player in the first team. But it says a lot about the incredible leadership of our more experienced players, because they showed him exactly the pathway, showed him what he still can be and where he has to adapt.”

James Milner’s influence, in particular, has been key. The vice-captain has always admired Jones’ talent, but wanted to know what lay underneath it. Could he learn the ugly side of the game? Would he be humble enough to admit, and work on, his weaknesses? Was he willing to do everything it takes to become a top-class professional?

Milner, sources say, was never shy of asking those questions out loud. ‘Where’s your left foot, Curtis? Don’t you want to head it? Come on, you’re stronger than that aren’t you?’

He tested the youngster, both in terms of his technique and his mettle. He challenged him to prove him wrong.

Jones didn’t always enjoy the comments – who would? – but he accepted the challenge. Winning Milner’s approval, and that of the other senior pros, became something of an obsession. 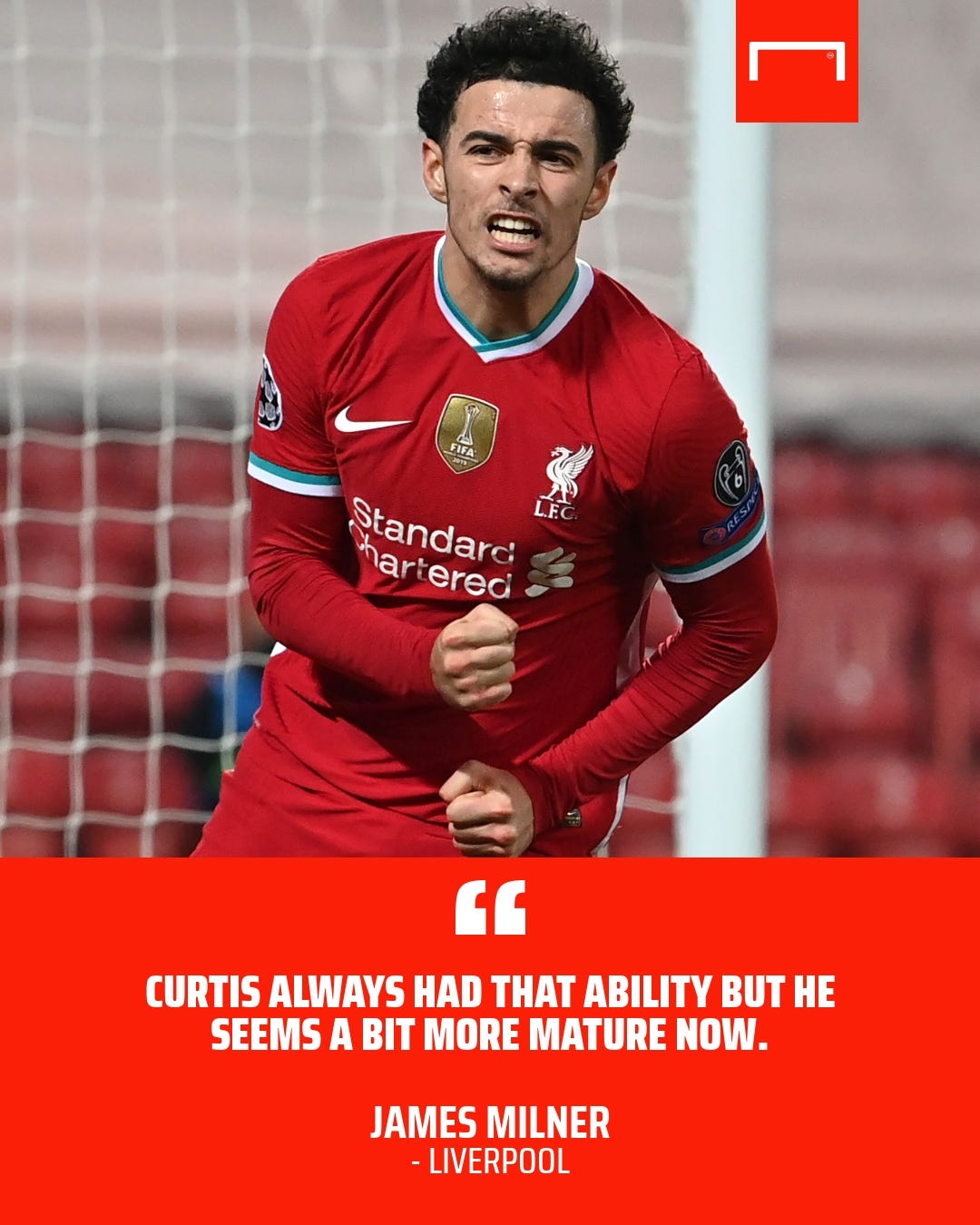 He managed it, too. Milner has spoken openly about the “massive difference” he has seen in the youngster’s game. “He always had the ability,” he said last season, “but he seems a bit more mature now.

“There are times when you need to encourage, but also times where you need a rocket as well. He’s realised that if you want to play for Liverpool, that [the defensive side of the game] is as important as the stuff on the ball.”

It is clear just from watching Jones that he has taken the advice on board. Not only is he stronger, able to utilise his 6ft 1in frame well in tight spaces, but he is ready to do the simple things as readily as the spectacular. He defends well, he closes down space and cuts off angles, he asks for the ball and he uses it well, either carrying it or, more frequently, playing a short, quick pass to help build Liverpool’s rhythm.

He scored the winner against Ajax recently, a big goal in a big game, but Klopp cared as much for his positional discipline, his aggression with the press and his attitude. He did what the team needed.

“It’s about doing things in the right moment,” he said. “It’s being involved in the game – really involved, not just on the pitch – for 90 minutes.”

Jones’ performance against Wolves last weekend was arguably his finest in a red shirt. No player had more touches of the ball, no Liverpool player won more tackles and only Sadio Mane contested more duels. He took a bang on the hip but completed 90 minutes as his side won 4-0.

The door is very much open, now. Liverpool have midfielders returning – Naby Keita and Alex Oxlade-Chamberlain are back, and Milner and Thiago Alcantara shouldn’t be too far behind – but Jones is a serious challenger, a threat that can’t be ignored. There’s more to come, room to grow still, but he deserves his chance.

The days of the ‘prospect’ are over. The boy has become a man, and Liverpool are the ones feeling the benefit.