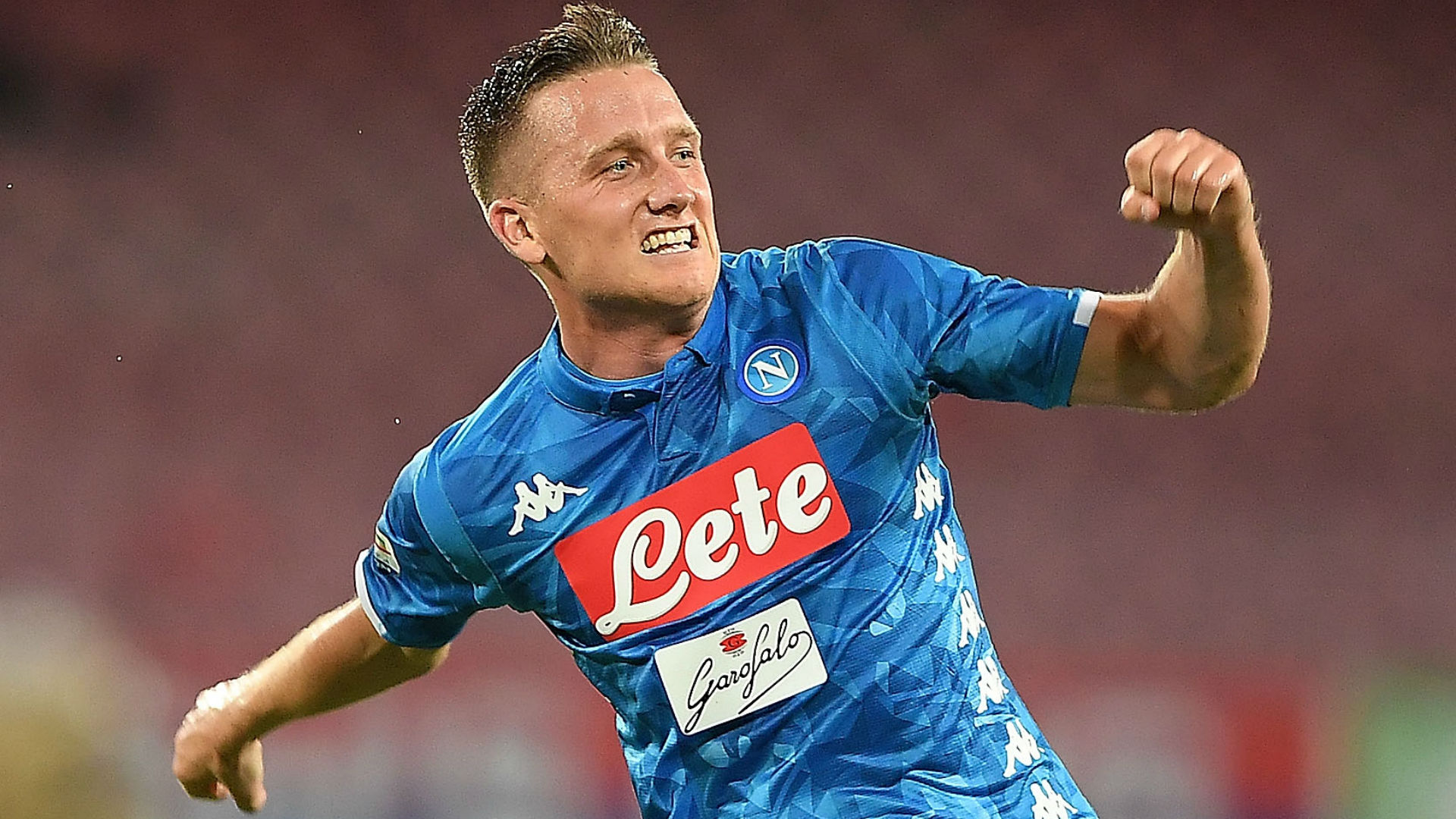 When Liverpool and Napoli meet in the Stadio San Paolo on Wednesday, one man could be forgiven for wondering what might have been.

Piotr Zielinski could, had things worked out differently, have been wearing red instead of blue. He could have been part of Jurgen Klopp’s fast-emerging side, dreaming of Champions League glory and a Premier League challenge.

Instead, the Poland international will be looking to stop the Reds in their tracks in Naples.

It is more than two years since Zielinski was on Liverpool’s radar, two years since he was close to a move to Anfield. Much has changed since then, of course, but the story is worth revisiting.

Klopp arrived on Merseyside in October 2015, replacing Brendan Rodgers, whose once-promising reign had disintegrated rapidly following the title challenge of 2013-14.

Liverpool’s feeling was that Rodgers was failing to get the most out of a talented, expensively-assembled group of players. A divide between the management and his recruitment team had done little to help matters, with the Reds operating almost a ‘one for you, one for us’ transfer policy. The club backed Rodgers with signings such as Christian Benteke, while asking him to give ‘committee picks’ such as Roberto Firmino and Emre Can an opportunity. Rodgers, unfortunately, struggled to fully trust those who had been signed for him.

Klopp’s first impressions of the squad he inherited were simple; it was talented but imbalanced, lacking pace in attack, depth at centre-back and dynamism in midfield. It was a view shared by Michael Edwards, then the club’s technical director but who would later be appointed to the wider role of sporting director.

The January 2016 window, Klopp’s first, saw only one arrival – the emergency short-term signing of defender Steven Caulker – but deals for Schalke defender Joel Matip and Red Star Belgrade midfielder Marko Grujic were arranged, to be completed that summer.

Zielinski, too, was targeted.

He had been looked at the previous summer, when Rodgers was still in charge. At that point, he was 21 and in the middle of a two-year loan from Udinese to Empoli.

Liverpool’s scouts had been alerted to his impressive performances with the Tuscan minnows. Their reports, fed back through Edwards and head of recruitment Dave Fallows, were glowing. Zielinski was two-footed, had terrific awareness and excellent running power, he moved the ball quickly and he had scope for improvement too. He had also, it seemed, flown under the radar of most top clubs; he had made his senior debut for Poland as an 18-year-old in 2013, but would not become a regular for his country until 2016.

Initial enquiries were positive, with the player and his representatives keen on a move to England. A fee of around €10 million (£9m/$12m) was suggested, though Liverpool were informed that both Napoli and AC Milan were keen on the player.

Liverpool opted to wait that summer, instead bringing in the likes of Benteke, Firmino, James Milner, Danny Ings and Nathaniel Clyne at significant cost, but continued to track Zielinski’s form at Empoli as Rodgers’ era ended and Klopp’s began.

And by January 2016 they were ready to make their move.

Zielinski, who was unsure as to his future, would later claim to have met Klopp at this point, discussing a potential move to Anfield for that summer. “I saw a different world and after returning my head was an even bigger mess,” he said. At Empoli, though, he continued to impress.

Liverpool, though, found negotiations difficult. Udinese owner Giampaolo Pozzo informed that due to the interest in Zielinski being reported in the media – the player was even pictured wearing a Liverpool shirt on Polish television - the price would be going up. Ian Ayre, then the Reds' chief executive, met with Pozzo on numerous occasions to try and finalise a fee, but was told that Liverpool would have to pay a lot more to secure the player, as much as double the initial €10m quoted.

An initial offer of €11m (£10m/$13m) was lodged in June 2016, but immediately rejected by Pozzo. Liverpool were also informed that Napoli were close to agreeing a deal with Udinese – crucially, one which would involve one of their players, Juan Camilo Zuniga, as a makeweight.

The idea was that once Zielinski signed for Napoli, Colombia international Zuniga would be loaned immediately to Watford, the English arm of the Pozzo family’s football portfolio.

Liverpool still felt they were in pole position, with even Aurelio De Laurentiis, the Napoli president, appearing downbeat about his chances of landing Zielinski. De Laurentiis told reporters the player was doing “everything he could” to avoid moving to Naples, joking that “maybe he just loves The Beatles.” Liverpool, meanwhile, were offering a higher price than Napoli but getting no joy out of Pozzo.

The Reds had missed out on other targets that summer – Mario Gotze rejected a reunion with a disappointed Klopp, joining Borussia Dortmund from Bayern Munich, while moves for Ben Chilwell and Christian Pulisic failed to materialise.

A midfielder, Klopp insisted, was vital. Liverpool looked at another young talent, Mahmoud Dahoud of Borussia Monchengladbach, but were told it would take in excess of £30m ($39m) to land the 20-year-old and backed away. The following spring, Dahoud moved to Dortmund for £10.5m ($14m).

Ayre, Edwards and Klopp worked hard to clear out the deadwood that summer, raising substantial funds through the sales of the likes of Benteke, Jordon Ibe, Joe Allen, Martin Skrtel, Sergi Canos and Brad Smith, and releasing high earners such as Mario Balotelli, Kolo Toure and Jose Enrique.

They could have gone back for Zielinski and/or Dahoud. The money was there. Instead, it was proposed that they target a more established midfielder, one who would need no time to adapt to the Premier League, and who could be an immediate fixture in the first team. Gini Wijnaldum was the man, signed from recently-relegated Newcastle in a £25m ($33m) deal as Klopp’s squad headed off on their US tour in July 2016.

Wijnaldum’s role since joining has evolved somewhat – he arrived with a reputation as a gambling, goalscoring midfielder but has settled as more of a continuity player under Klopp, protecting the ball well, recycling possession and using his football intelligence to make a positive impact defensively.

He was Liverpool’s last signing of that summer window, with Zielinski eventually completing his move to Napoli two weeks later. The reported fee was €16m (£14m/$19m) – lower than Liverpool had been willing to pay. Zuniga, incidentally, had moved to Watford on loan a month earlier.

In Naples, Zielinski has made an impact, albeit in moments rather than any sustained period of brilliance. He has made more substitute appearances than starts for Napoli in Serie A, though under new boss Carlo Ancelotti he looks like he will be a permanent fixture, starting seven of the first eight games of this campaign. Under Ancelotti’s predecessor, Maurizio Sarri, he was used almost as the ‘12th man’ dipping in and out without ever nailing down a place. Think of Pedro or Willian at Chelsea under Sarri now, perhaps?

The expectation is that he will soon pen an extension to his Napoli contract, complete with a buy-out clause of €100 million (£89m/$116m). His current deal expires in 2021 and has a clause worth €65m (£58m/$75m). Chelsea, predictably, and Arsenal were both linked during the summer.

Those close to Zielinski, and those who have tracked his career closely, still believe he can go on to become one of the best players Poland has ever produced. The talent is there, the attributes are there; now it’s about putting it all together, taking his opportunities.

As for the long-term future, who knows? Dreams of one day playing in England remain – Klopp and Liverpool continue to track his progress from afar – and at 24 time is very much on Zielinski’s side.

For now, though, his aims are simple; stay in the Napoli team, make his presence felt under Ancelotti.

And in the short, short term, show Liverpool what they could have won.