France may have posted 22 wins from the 30 matches they have played since overcoming Croatia in Moscow three years ago to win the World Cup, but they approach their opening match of Euro 2020 under a cloud.

Ahead of Monday's meeting with Germany in Munich, a dispute has been brewing between Kylian Mbappe and Olivier Giroud, who, if everything falls neatly into place, could become Les Bleus’ record scorer over the coming weeks.

Indeed, Giroud had just moved to within five goals of Thierry Henry’s all-time mark after scoring twice against Bulgaria on Tuesday night when he made it clear that he wasn't entirely happy with his service.

“I was a little quiet because, sometimes, I made runs and the balls didn’t come to me. I am not saying that I always make the best runs, but I am seeking to offer solutions in the box,” Giroud complained to L’Equipe du Soir.

Those comments were interpreted by the French press as a clear dig at Mbappe – a player who has increasingly been forced to reject claims of egotism since joining Paris Saint-Germain in 2017 – particularly as Giroud went on to thank Benjamin Pavard and Wissam Ben Yedder for their assists.

Didier Deschamps, whose chief strength as France coach since taking over from Laurent Blanc in 2012 has been forging squad unity, has spent the past few days fire-fighting.

L’Equipe has reported that Mbappe wanted to give a press conference to answer back at the Chelsea hitman only to have that request turned down by the Bleus boss.

Giroud spoke to the PSG star in the aftermath to calm tensions but, at training, the relationship between the pair has been noticeably cool. 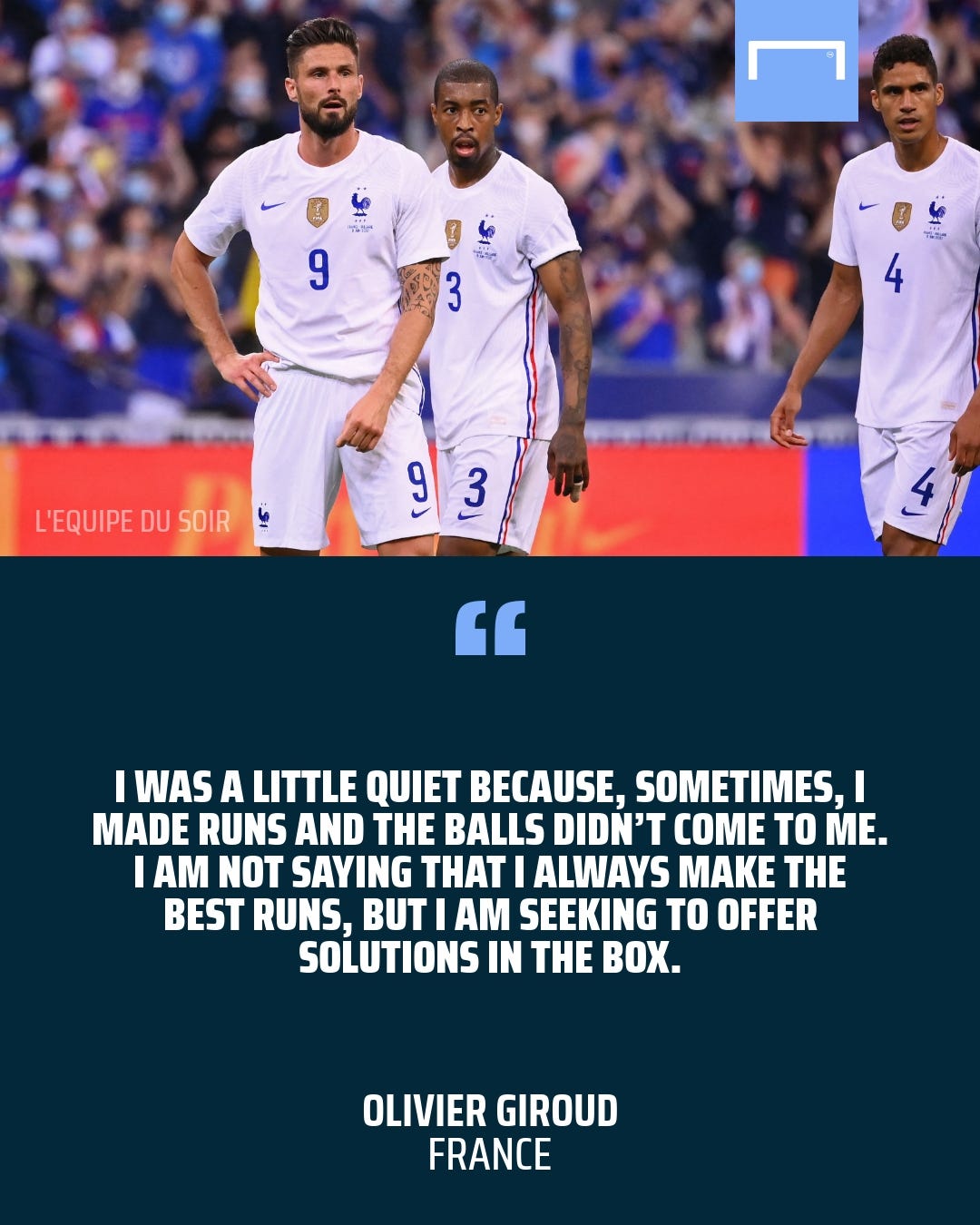 “The only tension that we feel is in our backs and our legs,” Paul Pogba joked to the media on Thursday. “The physios are there to massage us and will remove that.

“I guess you’re talking about the situation between Olivier and ‘Kiki’. There’s nothing at all. At least, from what I’ve seen, there’s nothing.”

On Friday, the French FA released a video of Mbappe and Giroud exchanging a couple of brilliant one-twos before the latter fired into the net. It was a moment worthy of going viral, although the timing was certainly convenient given what had been making headlines in the days previous.

Giroud, after all, could have some justification in feeling slighted in recent days. The 34-year-old has been treated as a disposable replacement at Chelsea for the past year and has had a contract extension triggered by the Stamford Bridge club apparently against his will.

“I want to make it clear that Chelsea reactivated the clause in April and they recently announced it to comply with Premier League rules,” Giroud explained during a press conference.

At international level, he has given years of sterling service and led the line successfully as France won the World Cup. He has worked immensely hard to maximise his talents and it is little wonder he feels that he deserves more respect. 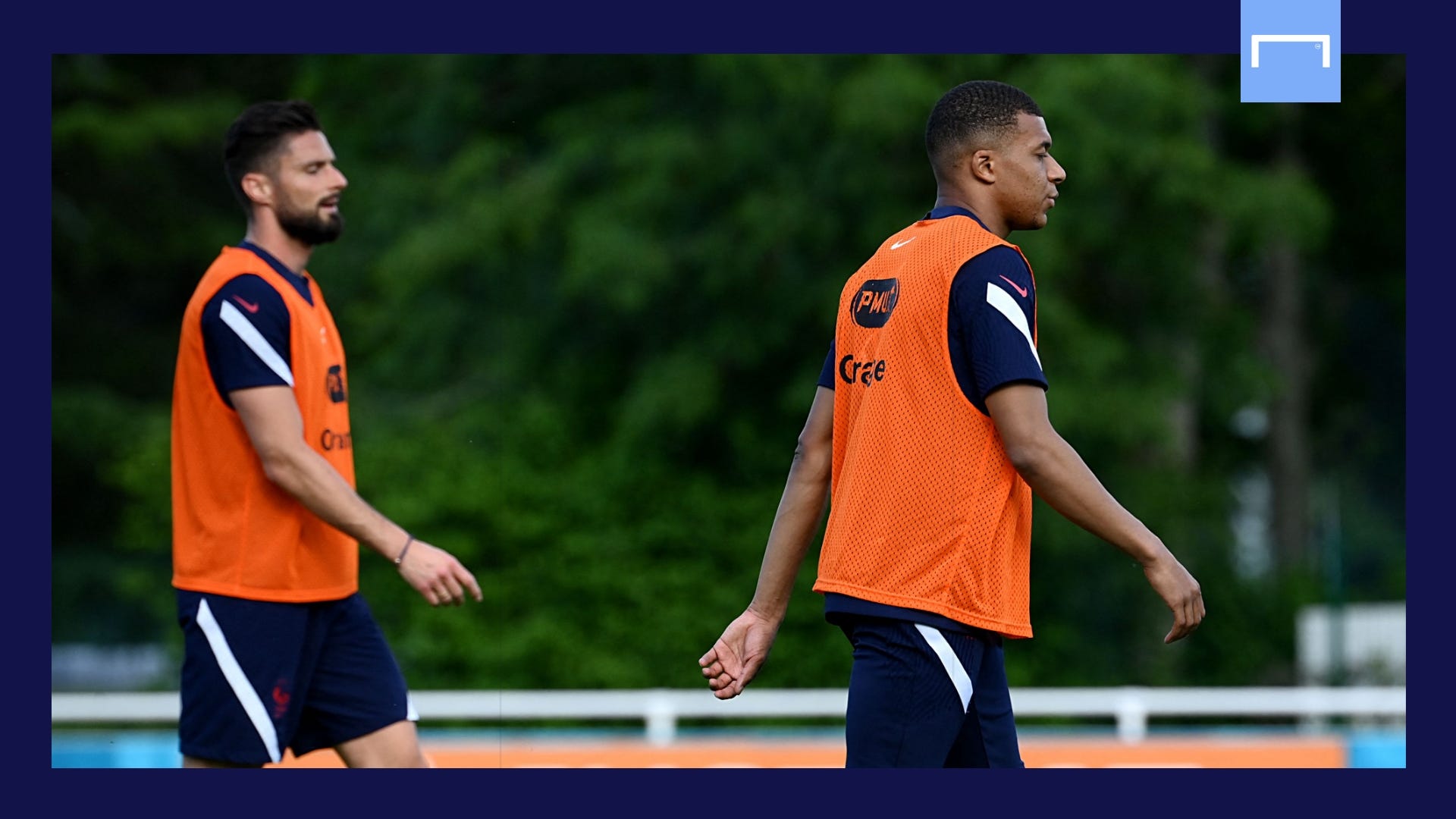 Mbappe's future is also uncertain, of course. His deal with PSG is up next summer, no new contract appears likely to be sorted for a month, but his dream move to Real Madrid is complicated by the Spaniards' financial constraints.

Nevertheless, his social media euphoria when Karim Benzema was named in the squad doubtless did not help Giroud's mood. Within hours of the announcement, he had posted a Photoshopped image of him high-fiving the Real Madrid striker with several flame emojis.

For years following their success at World Cup 1998 and Euro 2000, France’s biggest problem was not a lack of talent, it was getting their world-class talents to pull in the same direction.

Deschamps masterfully solved these issues at Euro 2016, which Benzema missed due to his alleged involvement in the Mathieu Valbuena sex-tape scandal, and then learned from the near miss on home soil to build a team that triumphed in Russia two years later.

Just how great the rift between Mbappe and Giroud is may only be evident if and when the pair take to the field together, but it has the potential to divide a team that should win the tournament outright.