Having come through the Gunners youth system under Arsene Wenger, the forward struggled when he moved back to Serie A

A single 90-minute match is often enough to change the entire course of a player's career. Arturo Lupoli only got 45 minutes.

Summer 2007, and the Fiorentina side of Cesare Prandelli have great ambitions for the season ahead. They have, many observers agree, the most fearsome attacking options in the whole of Serie A.

Luca Toni has made his big move to Bayern Munich, but Prandelli can still call on the explosive Adrian Mutu, the experienced Christian Vieri, and several hotshot young guns – including Lupoli.

The 20-year-old, a 5'8'' pocket rocket capable of playing both out wide and centrally, is seen as having an advantage over his fellow young forwards, including Daniel Osvaldo and Giampaolo Pazzini, as he has experience of playing for, at the time, one of the strongest football clubs in world football: Arsenal.

At 17, the Gunners had snapped Lupoli up from Parma, giving him the chance to learn alongside Thierry Henry, Dennis Bergkamp and other 'Invincibles'.

With Arsene Wenger keen to give youth a chance, Lupoli stood out as he scored bags of goals for the youth team alongside another hotshot wonderkid, Nicklas Bendtner.

He made his first-team debut in October 2004 in a League Cup game against Manchester City, before scoring his two maiden senior goals in the next round versus Everton. Lupoli saw Premier League action for the one and only time in the 2005-06 season, a defeat against Blackburn Rovers.

However, with the path to regular action blocked by Henry & Co., Lupoli was sent on loan in 2006-07 to Championship club Derby County. While at Pride Park, he decided not to extend his deal at Arsenal, and instead sign a pre-contract agreement with Fiorentina and leave on a free that summer. 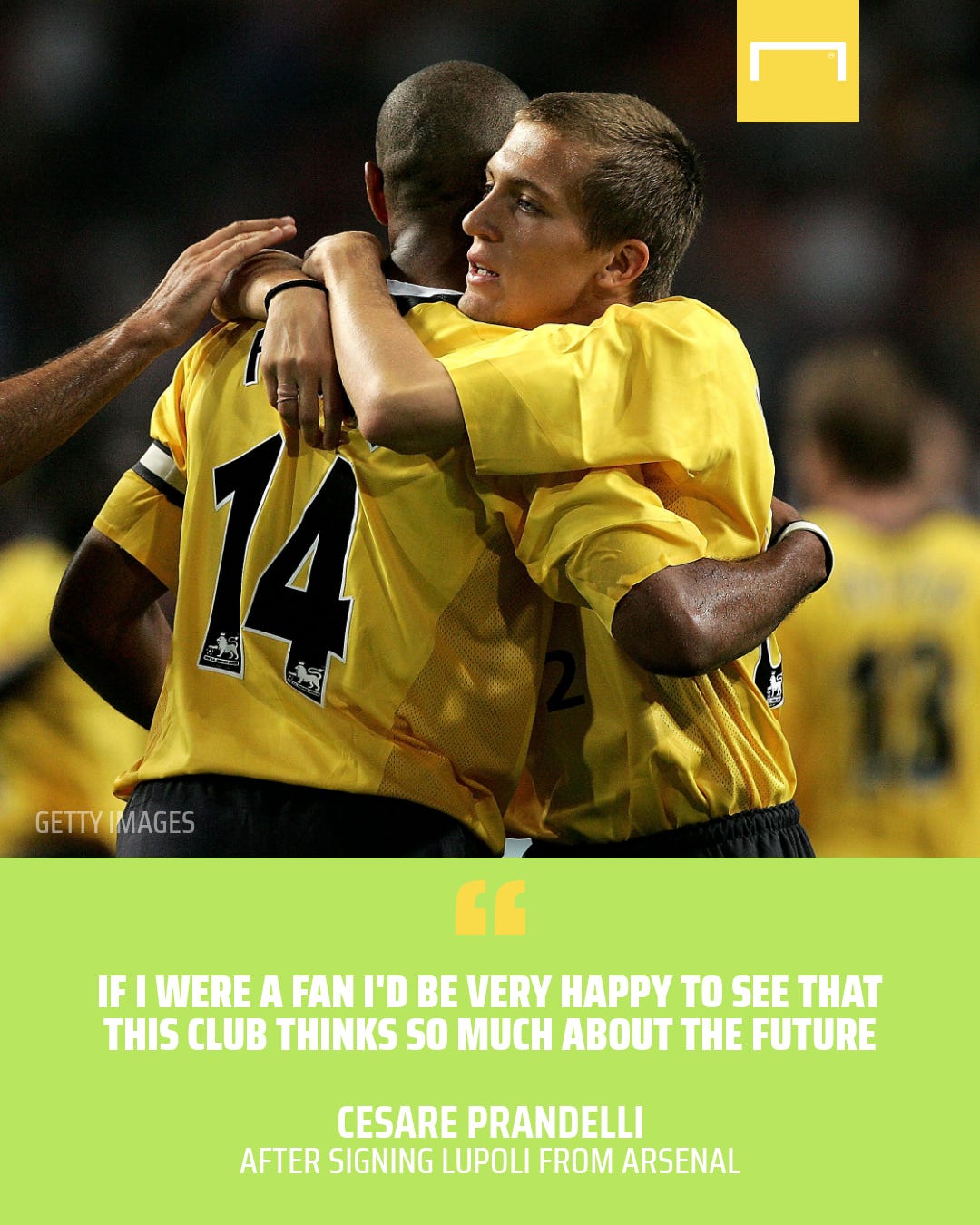 Having just made his Italy Under-21 debut, Lupoli was viewed as a real coup for the Viola, particularly as Napoli appeared to have a deal done before Fiorentina swooped in.

Pierpaolo Marino, Napoli chief executive, said at the time: "I had a verbal agreement with the player's agent. He then told me that the player chose Florence. I wish the boy one day to play for Napoli and in that case spare us the tear-jerking statement to avoid the whistles of San Paolo”.

Fiorentina CEO Pantaleo Corvino meanwhile was delighted: “We wanted to close this deal, we always think about the present, but also about the future. Lupoli can play both first and second striker, he has a great sense in front of goal and in Florence he will be able to grow among the many champions we have in the team”.

Prandelli had been in charge of the Parma first team while Lupoli was scoring 45 goals in just 22 matches with the youth squad, and was seemingly thrilled to have the player on his books again.

He said after the striker was confirmed on a five-year deal: “I can only say that I have known him since the days of Parma. He was with the youth team, but I was already coaching him with the first team. If I were a fan I would be very happy to see that this club thinks so much about the future”.

For all the talk about the future, much was expected immediately from boy wonder Lupoli. Yet on the first day of the 2007-08 Serie A season, Lupoli was not in the squad. In fact, he would not make his Fiorentina debut until December.

The embarrassment of Viola attacking riches meant Lupoli had stepped from the oven and into the furnace. His path to the first team was just as blocked in Florence as it had been in London.

On December 11, 2007, Lupoli is brought on as a half-time sub in a Coppa Italia clash with Ascoli. For the player signed on a five-year deal with much fanfare, these would be the only minutes he would ever play for Fiorentina. 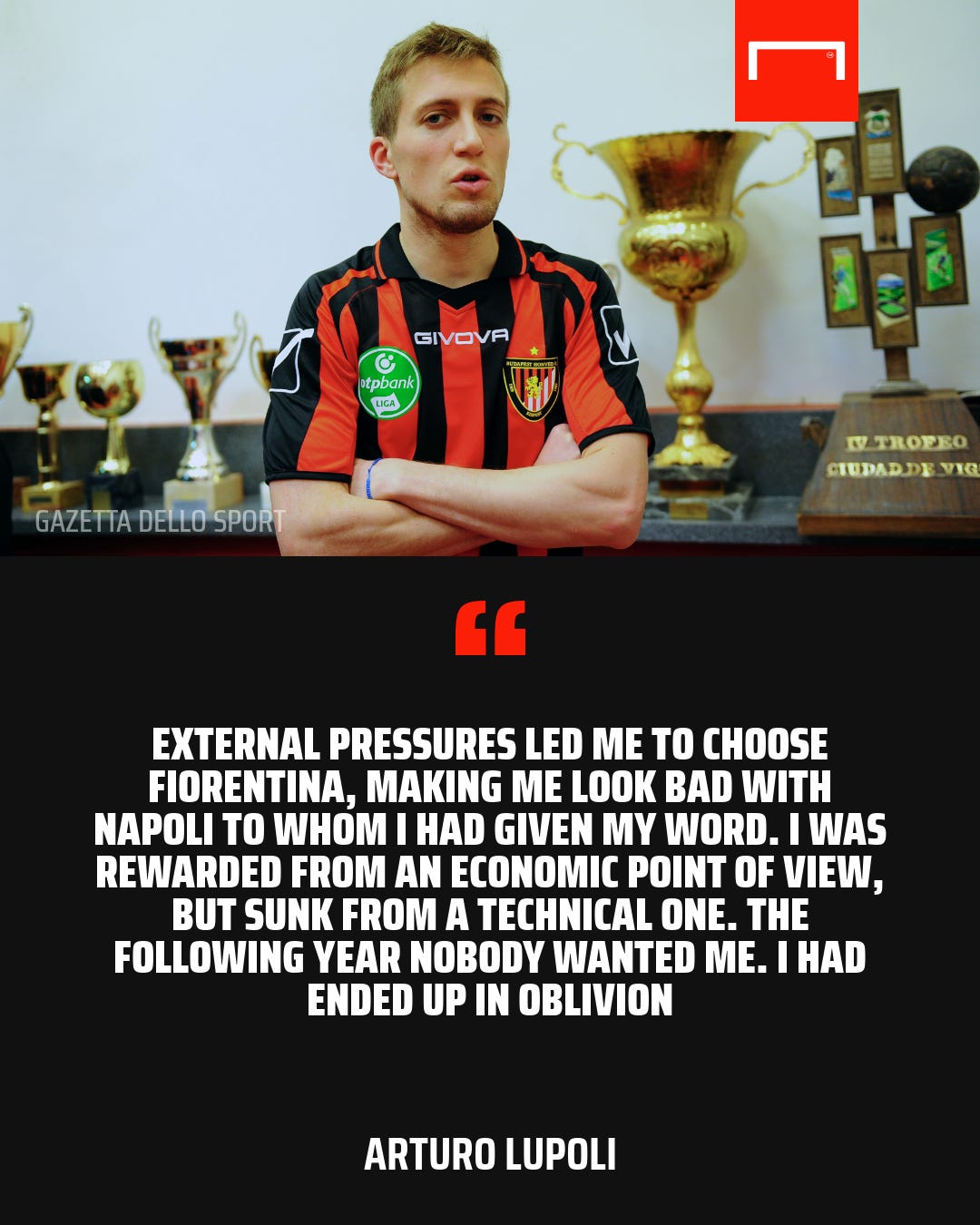 The following month, he was sent on loan to Italian lower league side Treviso, and in 2008-09 he returned to the English second tier with spells at Norwich and Sheffield United.

In June 2009, Viola relased this statement: "Fiorentina announces that it has jointly sold the striker Arturo Lupoli to Ascoli and that it has acquired the midfielder Francesco Di Tacchio."

Short, and not sweet – not unlike Lupoli's spell at the club, with the player later admitting in a Gazzetta dello Sport interview that turning down the move to Napoli was a massive mistake.

“At Fiorentina... it was the worst year of my career," he said. "And to think that I was done with Napoli: De Laurentiis and Marino were waiting for me to sign.

"External pressures led me to choose Florence, making me look bad with Napoli to whom I had given my word. I was rewarded from an economic point of view, but sunk from the technical one. The following year nobody wanted me. I had ended up in oblivion."

A short loan spell to Hungarian historical giants Honved aside, the remainder of Lupoli's career is a road trip into obscurity that even the most ardent Football Italia fan would struggle to navigate: Grossetto, Varese, Frosinone, Pisa, Catania, Sudtirol, Fermana, Virtus Verona.

At 34, he continues to do the rounds with Virtus Verona in Serie C, but on the evidence of his strike partner in the Parma youth squad – Giuseppe Rossi – there could have been so much more.

Poor advice and a lack of first-team chances – a deadly cocktail which many promising young players have been forced to drink early in their careers. Lupoli got a mouthful, and never managed to wash away the bad taste.