The career of Nicklas Bendtner can be summarised by one game at the 2012 European Championship.

In the group-stage fixture between Denmark and Portugal, the Danes lost 3-2 but only after battling back level from 2-0 down, thanks to a couple of well-taken headers from Bendtner.

The forward's finishing drew little attention, though. Most of the media focus was on his celebration of his second goal, with Bendtner pulling down his shorts slightly to reveal the name of a bookmaker on his underpants.

The sponsorship was deemed illegal by UEFA, who banned Bendtner for one match and fined him £80,000 ($113,000) – although the bookmaker in question footed the bill – in a move that has since gone down in infamy, often compared by fans to the European football governing body's comparatively lax punishments for racism and other far more heinous offences.

The whole affair was classic Bendtner – who last week announced his retirement from playing at the age of 33 – because bizarre incidents, moments of towering ego and the status of the forward as a 'banter footballer' clouded the fact that he was, on his day, a supremely talented player.

'Lord Bendtner', as he was nicknamed following a relationship with a Danish socialite, emerged through the Arsenal academy system to establish himself in the first team, scored goals in the Premier League, before later winning titles in Italy and Norway.

He played 81 times for Denmark, scoring 30 times, featuring at the 2010 World Cup and Euro 2012. A later renaissance would have seen him selected for Russia 2018, but a groin injury ruled him out.

On paper, it all makes for an impressive career, but Bendtner's life in football was never black and white.

Joining Arsenal aged 16, he broke into the senior squad in 2007-08 after impressing the reserves. He scored nine goals in 40 appearances, including one on his Champions League debut, but he tasted controversy for the first time when Arsene Wenger tried to partner him with Emmanuel Adebayor. 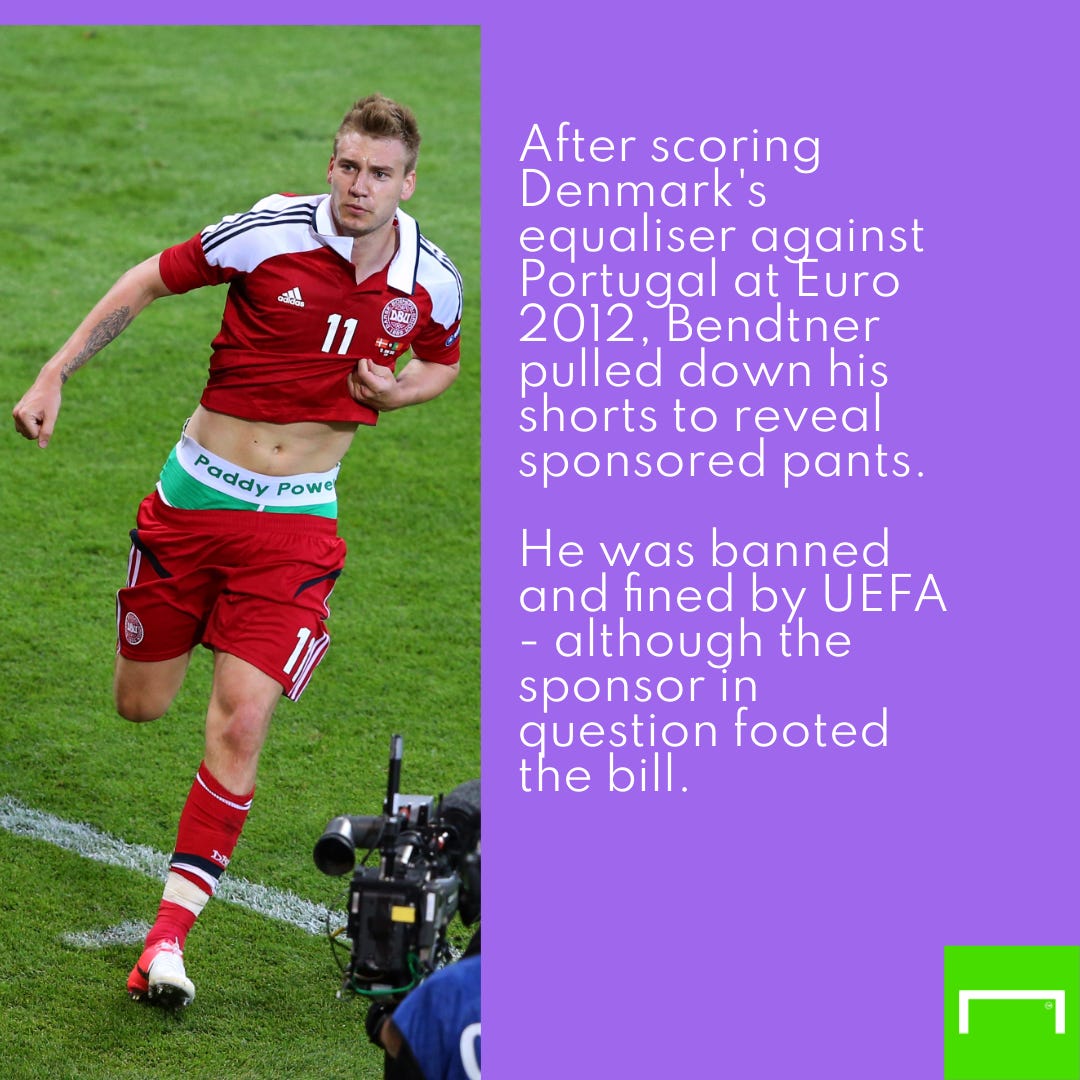 Bendtner and Adebayor never got on, the nadir coming in a 5-1 League Cup defeat to rivals Tottenham, in which they ended up fighting on the pitch.

"I remember him being substituted on and I think there was a key moment where I don't think the ball had been passed to him. There was a heated exchange of words where a lot was said between us, and then we squared up.

"Then he sort of headbutted me, so he sort of pushed me away while headbutting me on the nose. Then, [William] Gallas came in, split us up and took us apart.

"We tried to talk it through in the dressing room but not so much in words, more something else. Then, we got separated and called into the boss’ office the next day. We got fined and that was the end of it. We didn't really have any encounters at all from that moment."

The pattern of Bendtner's time at Arsenal was set – respectable footballing returns with madness never far away.

In 2009, Arsenal reached the Champions League semi-finals thanks to a Bendtner hat-trick against Porto. Hours after the Gunners were beaten in the last-four second-leg clash against Manchester United, he was photographed leaving a nightclub with his trousers around his ankles. He claimed his drink had been spiked.

Such off-field antics began to outweigh his on-field performances in Wenger's eyes and Bendtner fell down the pecking order at Arsenal. He was sent on loan to Sunderland and Juventus, winning the Serie A title with the latter but failing to score in 11 matches.

His relationship with Wenger became sour and distant, until a failed transfer to Crystal Palace on transfer deadline day in 2013 caused things to bubble over. 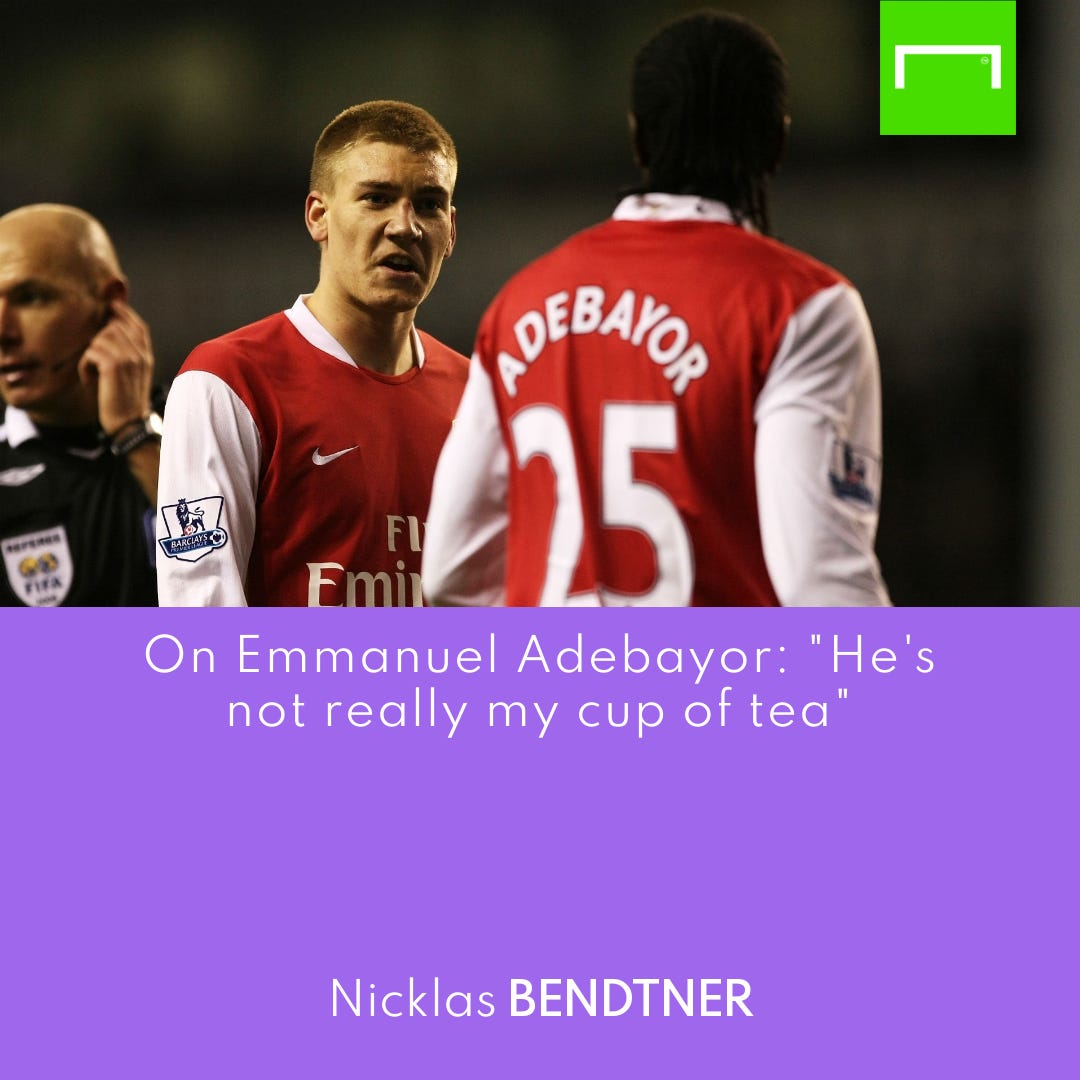 In his autobiography, Bendtner says: "It’s after 8pm when Wenger calls. He gets straight to the point. 'I’m afraid your transfer isn’t going to happen. We’ve not been able to buy the striker we wanted. So, you’re our back-up. That’s your job for the next year.'

"I hang up. I look at my agent, who shrugs his shoulders. Then, I call back and I say a bunch of pretty ugly, disrespectful stuff. Like 'a*shole' and 'w*nker.' 'We can’t stand each other any more,' I say. 'It’d be best if we parted ways.'

"'Well, OK, that’s quite possible,' Wenger replies in his heavy French accent. 'It’s not going to happen. See you at training."'

Bendtner admits he stepped over the line with Wenger, telling The Guardian last year: "I think if I had a strong figure in my background, that could have made the difference, but Arsene and I had a good relationship and I have tremendous respect for him.

"I don’t blame him for anything. He was always honest and he understands there are things I did that I’m not proud of.”

He departed Arsenal on a free transfer in 2014, spending two years in the Bundesliga with Wolfsburg before an underwhelming campaign with Nottingham Forest.

Then came the renaissance: he joined Norwegian giants Rosenborg, helping them to back-to-back Eliteserien titles, winning player of the year in both campaigns and enjoying his best-ever scoring season in his first year (23 goals in 44 matches).

He continued to court controversy, though, ranging from the comical – selling his house after being spied on by a drone during a Harry Potter film marathon – to the entirely unfunny – spending 50 days in jail after breaking a taxi driver's jaw.

After a short spell with FC Copenhagen, Bendtner was without a club from January 2020 until announcing his retirement. A reality TV series documenting his life notwithstanding, it was a low-key end to a career that was anything but.

Tall, strong, versatile, good in the air, good with his feet, hard working and a natural finisher, Bendtner was a very fine footballer. Not that anyone will remember.