Between their 2004 'Invincibles' season and the last hurrah of a trio of FA Cup triumphs, Arsene Wenger’s Arsenal endured a near decade-long barren run, punctuated by humiliating defeats, tournament failures and bad signings.

Picking the poorest acquisition from this period is tough as the field is crowded, but few will send a shiver down the spines of Gunners supporters quite like Andre Santos.

The Brazilian played for Arsenal between 2011 and 2013, scoring twice in 23 league appearances – somehow only one fewer than the number of Selecao caps he earned.

He joined on transfer deadline day in the summer of 2011, signed from Fenerbahce for €7 million (£6.3m/$8.5m). Like a coat hurriedly purchased in the sales, he never quite fit.

Santos was snapped up to play at left-back, as Wenger attempted to shore up a leaky defence, but his choice of shirt, No.11, gave a more accurate representation of his intentions.

He became infamous for charging forward, with an apparent disregard for tactics or team-mates.

There were some high points. He scored in an extraordinary 5-3 win over Chelsea at Stamford Bridge in November 2011, and celebrated in style by performing a samba-like dance. Santos later explained that it was a tribute to a musician friend of his who had reached No.1 in the Brazilian music charts.

Such highlights were few and far between, though, and his extra-curricular activities soon started to provide Wenger with as much of a headache as his gung-ho approach on the pitch. 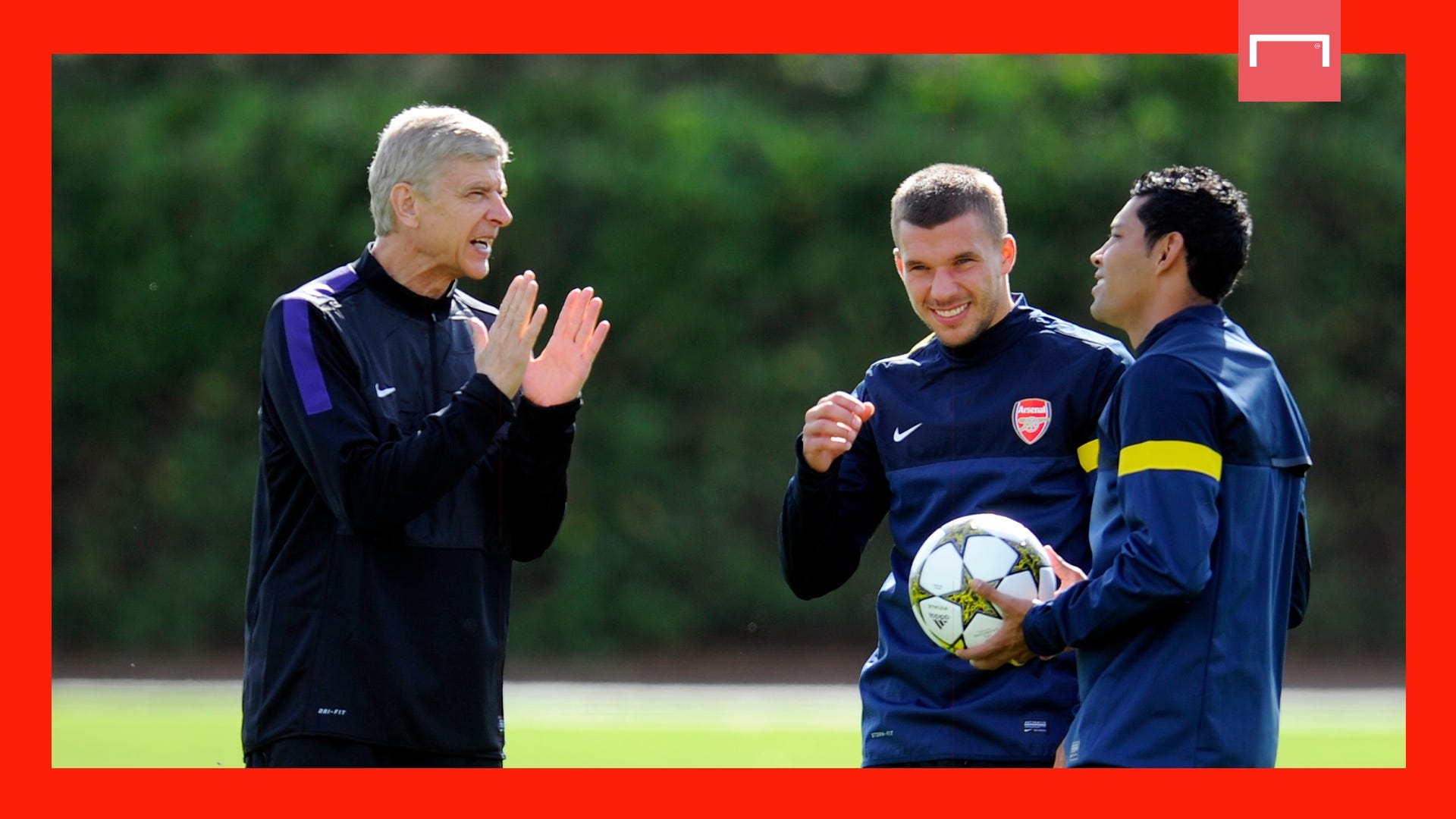 The nadir came in August 2012, when he was banned from driving for 12 months after blasting his Maserati through M25 rush-hour traffic at 145mph – double the speed limit – while being pursued by police.

When pulled over, he said he was only speeding because he was late for training and had not heard the sirens as he was playing music loudly.

On the field, the lasting and most painful memory for Gunners fans came on November 3, 2012. Following an abysmal first-half display against Manchester United, Santos topped things off by swapping shirts with Robin van Persie, the former Arsenal captain who had left the club in acrimonious circumstances.

Santos still has no regrets, telling Brazilian television network UOL in 2019: "I never stopped being Robin's friend. My culture is different from the English culture. I'm not obliged to be in the same culture as them."

Van Persie, though, has admitted that he should have waited before initiating the trade, telling BT Sport last year: “You have to think about the consequences. You know, if I look back at that moment with Santos, I think I should have done better there.

“Yeah, poor guy. It was all negative for him because people thought, 'Why are you swapping shirts at half time?' I do get that feeling that people might think that way, but Andre Santos was a friend of mine. We went for dinner, I was going to his house while I was playing at Arsenal.

“I think it was my first game back and, at half time, he asked me, but I should have thought about it a bit better and waited 20 metres then swapped inside the tunnel. It would have saved him a lot of hassle.” 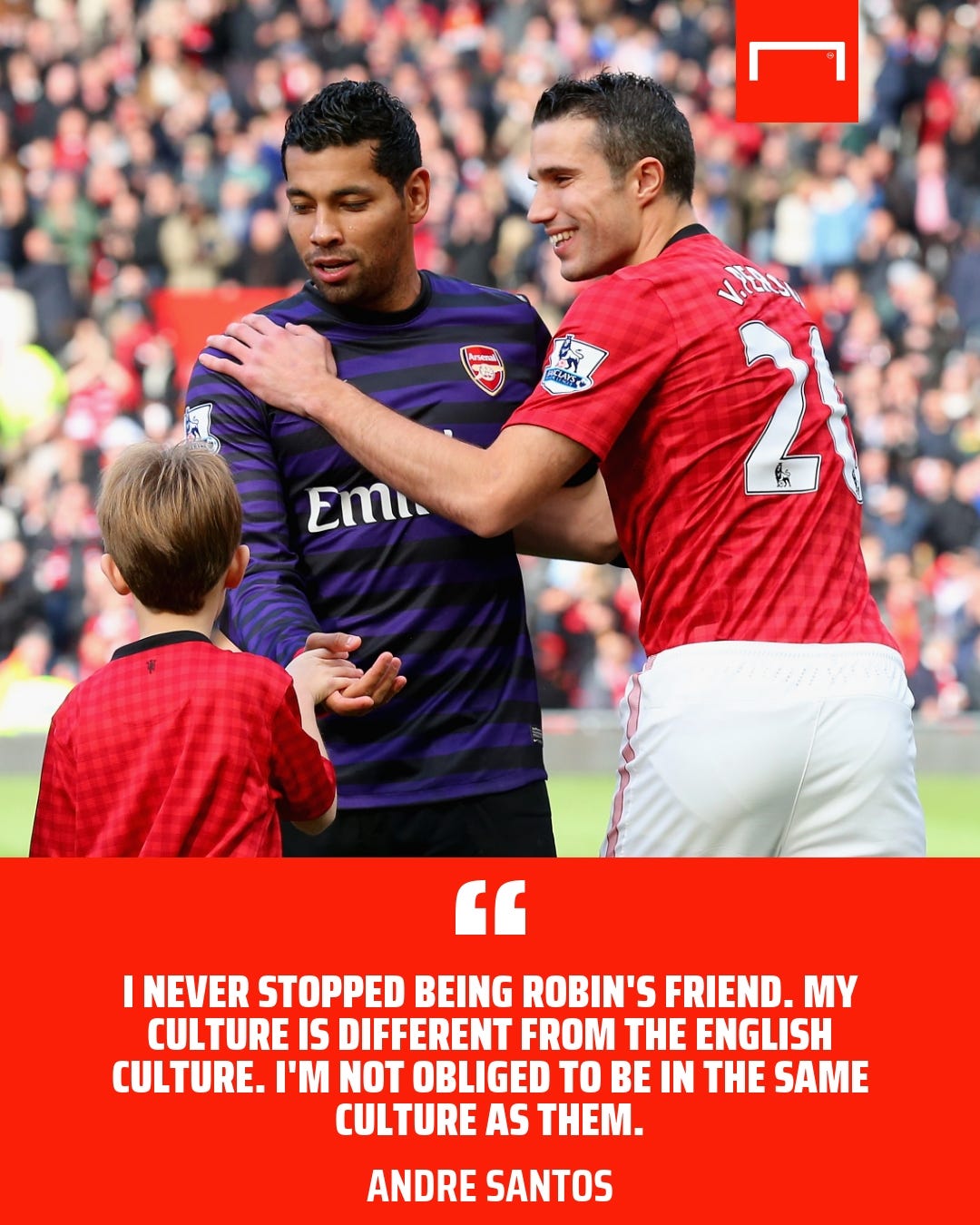 It would prove the last notable event in Santos' Arsenal career. Nacho Monreal was signed as his replacement in January 2012. The Brazil international joined Gremio on loan in February 2013, before moving permanently to Flamengo.

Santos’ later career resembled a man throwing darts at a globe in order to choose his next landing spot. Among the stops on his world tour were India's FC Goa, Botafogo, FC Wil in Switzerland, a return to Turkey with Boluspor before finishing at Figueirense.

The on-field and off-field disasters continued to follow. Santos was attacked by a Flamengo fan following a dreadful display in a 4-0 loss against Internacional. The incident left Santos in hospital.

At Botafogo-SP, he received a 30-day drug ban after testing positive for the banned substance hydrochlorothiazide. He claimed any contamination was accidental.

Eventually, Santos hung up his boots and turned to other activities. Following football, he opened a restaurant in Sao Paulo, called Flavours.

Among the delicacies on offer included Uramaki Miami, which consists of “a [sushi] roll of crispy salmon in breadcrumbs, covered with blowtorched buffalo mozzarella, bacon bits and special sauce", and a Sushi Burrito, with salmon, cream cheese, sweet chilli sauce, onion and Doritos.

Such a bizarre and unpalatable mix of tastes is reflective of Santos’ time in north London. For Arsenal fans, Santos' name really was as welcome on a team-sheet as raw fish in a Mexican meal.