The Spaniard's move to the Eithad was an ideal transfer in theory but, in practice, it proved a disaster, with the forward leaving a year later

A quick and skilful forward, fresh from three impressive seasons in a top European league, signed to help usher in an era of dominance under an exciting new manager, whom he had played under before and been partly shaped by at youth level.

Nolito to Manchester City was a deal that only worked in theory, though. In practice, it summed up Pep Guardiola’s uncomfortable introduction to the Premier League in 2016-17.

He was the second player to join City under Guardiola, signed exactly one month after Ilkay Gundogan’s transfer from Borussia Dortmund was confirmed.

However, Gundogan remains a key member of the City side, Nolito never fit in.

The Spaniard had come through the Barcelona B team and played two Liga matches under Guardiola in the 2010-11 season, so was regarded as an ideal addition to help shape the Catalan’s approach to the English game.

It seemed a natural step up for Nolito too, after three impressive seasons at Celta, where he scored 39 goals in 100 league games.

For the keen of eye and bright of forethought, there were issues, though. 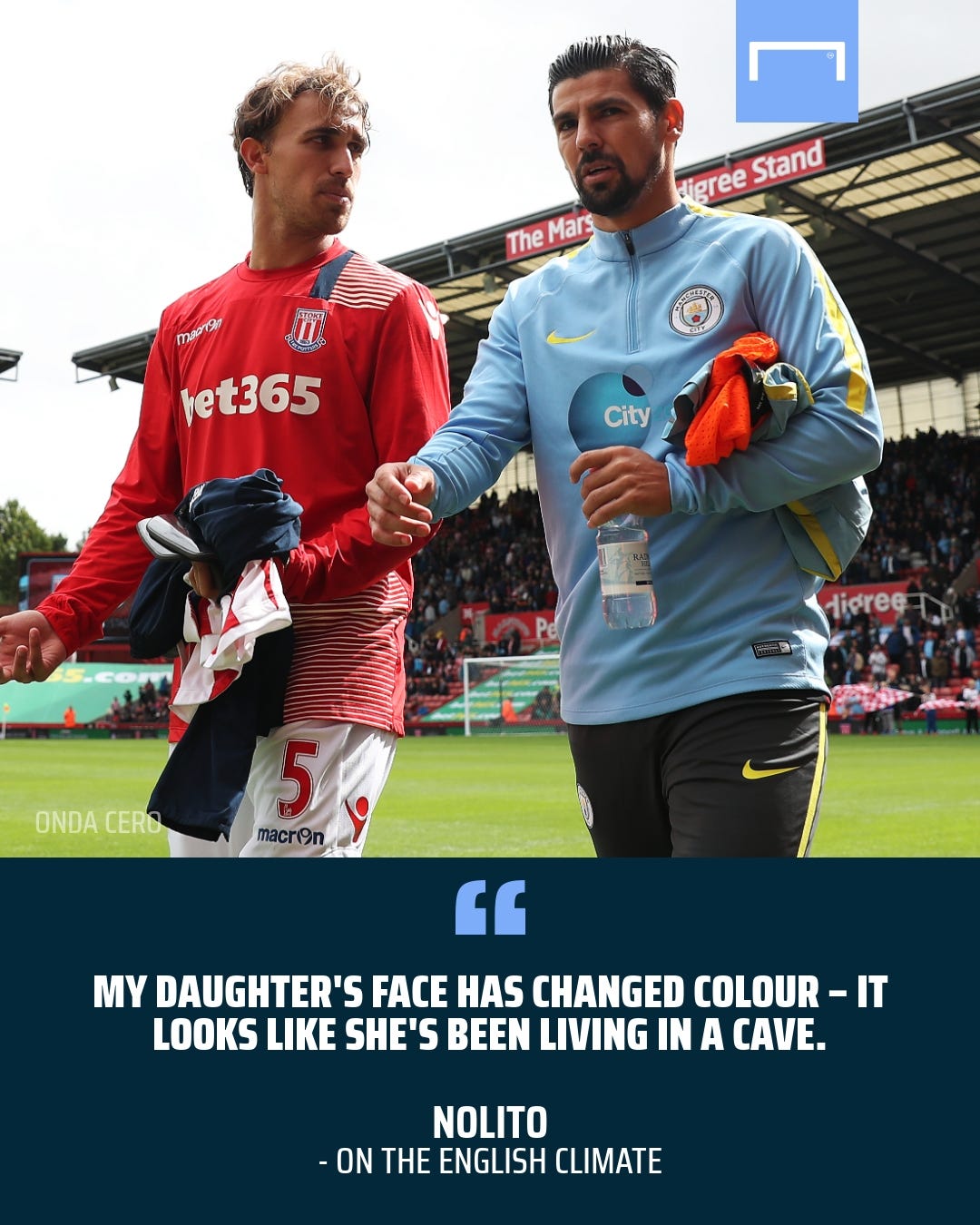 Nolito was 29 when he made the switch, which was on the old side for a player making their biggest career move, and particularly for a winger reliant on pace. Furthermore, he had never played outside Iberia before, with his whole career spent in Spain except for two seasons with Benfica.

Things started well, though. He scored four times in City's opening 11 games of the season and offered Guardiola a useful option from the bench.

However, he fell out of favour over the Christmas period, with Guardiola admitting that he had made his decision based on Nolito's lacklustre displays in training.

In 2017, he started one game for City – against Huddersfield in the FA Cup – and played a total of 39 minutes of Premier League football across five appearances.

In the final seven league matches, he was a 90th-minute replacement against Middlesbrough, an unused sub at home to Leicester, and not included in the squad for the other five fixtures.

After the season had ended in disappointment, both for City and Guardiola, who had never previously failed to win at least one trophy over the course of a single campaign, Nolito began noisily angling for an exit, particularly after City announced the acquisition of Bernardo Silva from Monaco.

"I hope I can leave, whether it's on loan, a transfer or whatever. I have several teams I’d prefer to join. I know Atletico, Celta, but they're things for my agent." 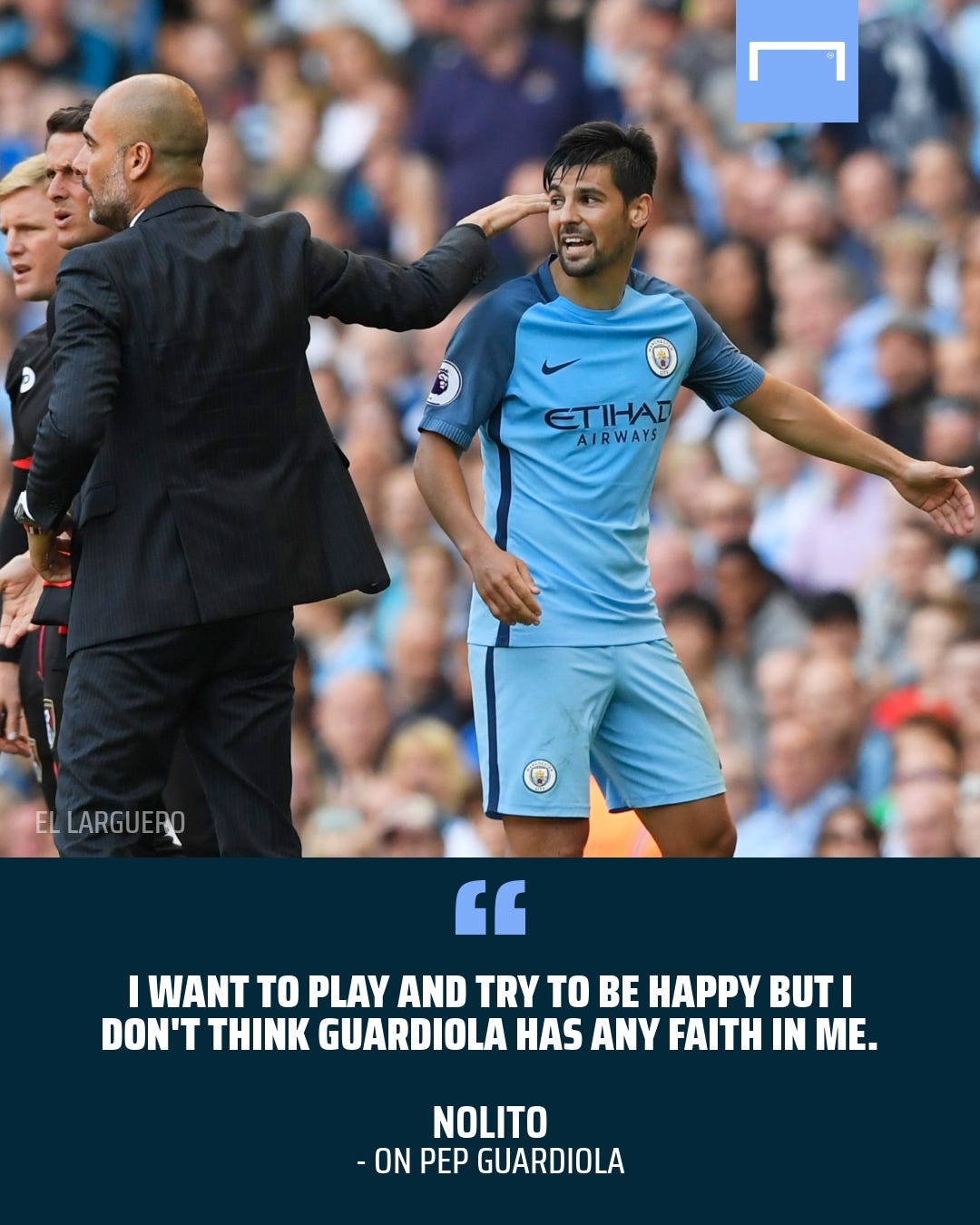 He criticised Guardiola in June 2017, telling El Larguero:  "I want to play and try to be happy but I don't think Guardiola has any faith in me. I guess City will want to receive a big fee for me because they paid a lot for me and they will have settled on a price.”

He also lamented the English culture, language and weather.

"My daughter's face has changed colour – it looks like she's been living in a cave."

Nolito eventually managed to plot an escape and returned to Spain. Now 34, he is back with Celta and playing regular football.

Cultural differences can have a major effect on a player and, in the case of Nolito, seem to have been the determining factor in the failure of his move.

When he joined City, he appeared at the peak of his powers, a star in La Liga and one of Spain’s best performers at Euro 2016. But after being exposed to a new environment, a more physical league, and a wet climate, Nolito ended up on City's worst signings list.