The Italian's status as one of Liverpool’s worst-ever signings is unquestionable, but also unfortunate for a player who was genuinely talented

For Liverpool, the warning signs were there.

Alberto Aquilani had played less than 15 Serie A games in two of his final three seasons at Roma.

Yet, in August 2009, Rafael Benitez decided that this was the man to fill the Xabi Alonso-sized hole in the Anfield midfield – and for a cool €20 million (£17m), no less.

Aquilani’s status as one of Liverpool’s worst Premier League flops is unquestionable, but also unfortunate. A player of genuine quality, he looked out of place in English football.

A product of Roma’s youth academy, Aquilani could have moved to the Premier League at 17 but turned down contracts at Arsenal and Chelsea.

He stayed in Rome and made his club debut in 2002 under Fabio Capello, becoming a regular first-team player from 2004-05 on.

Indeed, Aquilani was an automatic pick for the Giallorossi midfield – when fit. Only once before joining Liverpool had he played more than 30 league games in a season – on loan at Triestina in Serie B.

However, there were plenty of moments at Roma that indicated he was a player of talent. A sensational rabona assist in a November 2006 win over AC Milan showed him at his flair-filled best, while he was also part of back-to-back Coppa Italia-winning sides. 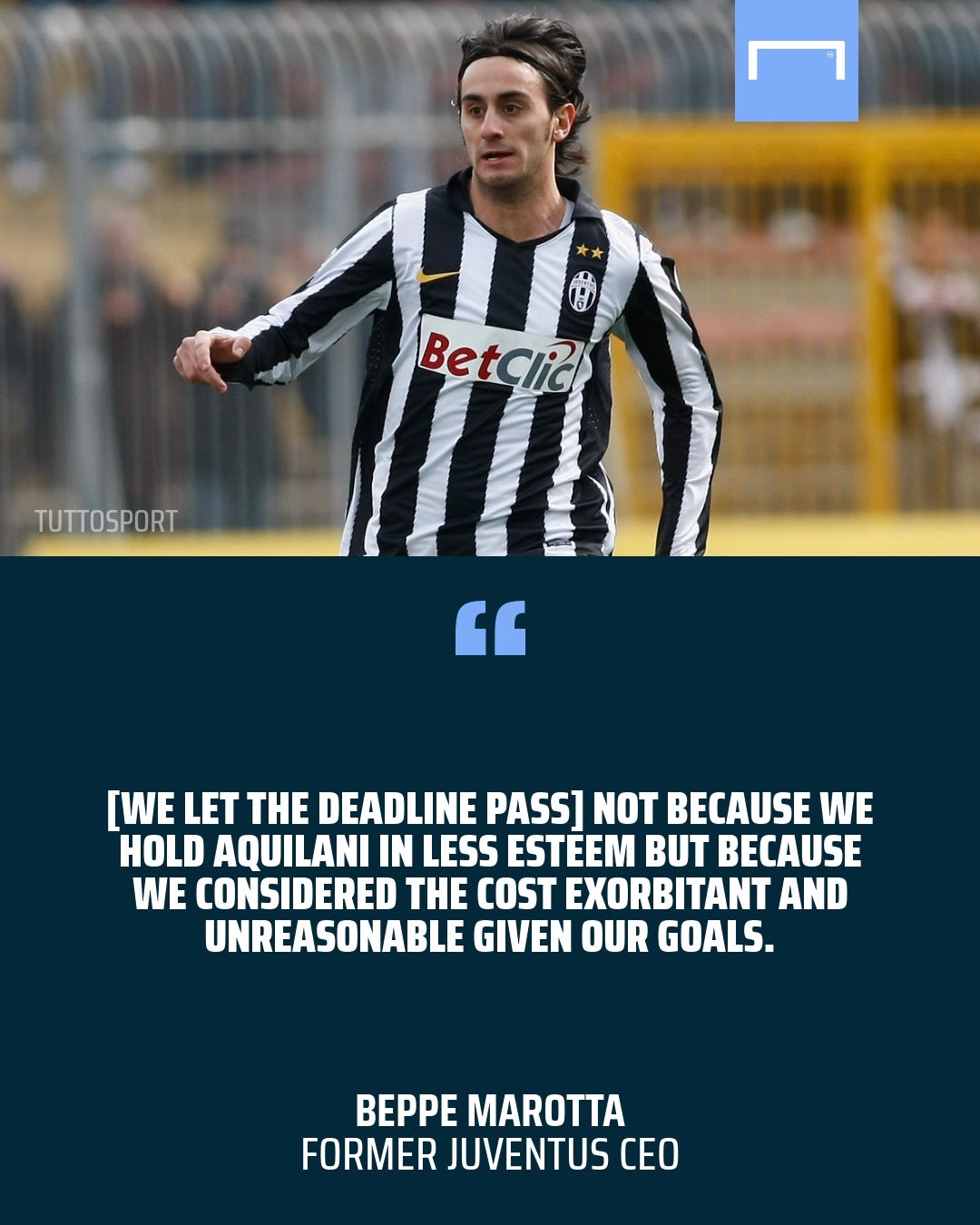 A versatile playmaker, Aquilani could play deep or in a more attacking position. His preferred role, though, was as a box-to-box midfielder, with his stamina resulting in him even being occasionally deployed at wing-back. For Italy, he sometimes played No.10 under Cesare Prandelli.

One thing he was not, though, was a like-for-like replacement for Xabi Alonso – yet that was what Benitez wanted Aquilani to be when he made the Italian the second-most expensive signing of his Liverpool tenure.

Alonso – who had left for Real Madrid due to differences with Benitez which stemmed from the manager's bizarre decision to try to replace him with Gareth Barry the year before – had a versatile passing nature that had made him such a perfect fit for a Reds midfield high on industry.

Aquilani’s dynamic, attacking style was a long way from this. He was not a ready-made quarterback, and Benitez soon realised this.

Despite his struggles for form and fitness, Aquilani did make 26 appearances in his first season at Anfield, and showed some flashes of inspiration.

He got a standing ovation from the Kop after being subbed on his first league start on Boxing Day; was named man of the match against Portsmouth in March after scoring his first Reds goal; and put in a superb display against Atletico Madrid in the Europa League, although Liverpool lost on away goals.

However, he played very few games of real import, and was mostly saved for run outs against relegation candidates.

At the end of the season, Benitez left Liverpool and new manager Roy Hodgson decided Aquiliani was not part of his plans, sending him back to Serie A on loan.

"I can't promise him games here so if a loan move to Italy could help him in that respect it might be good for all parties," the English manager said.

"It would certainly be what he needs, it would certainly protect the value of the player and when he does return to Liverpool, no doubt we will see the Aquilani that we signed before he came here injured last year." 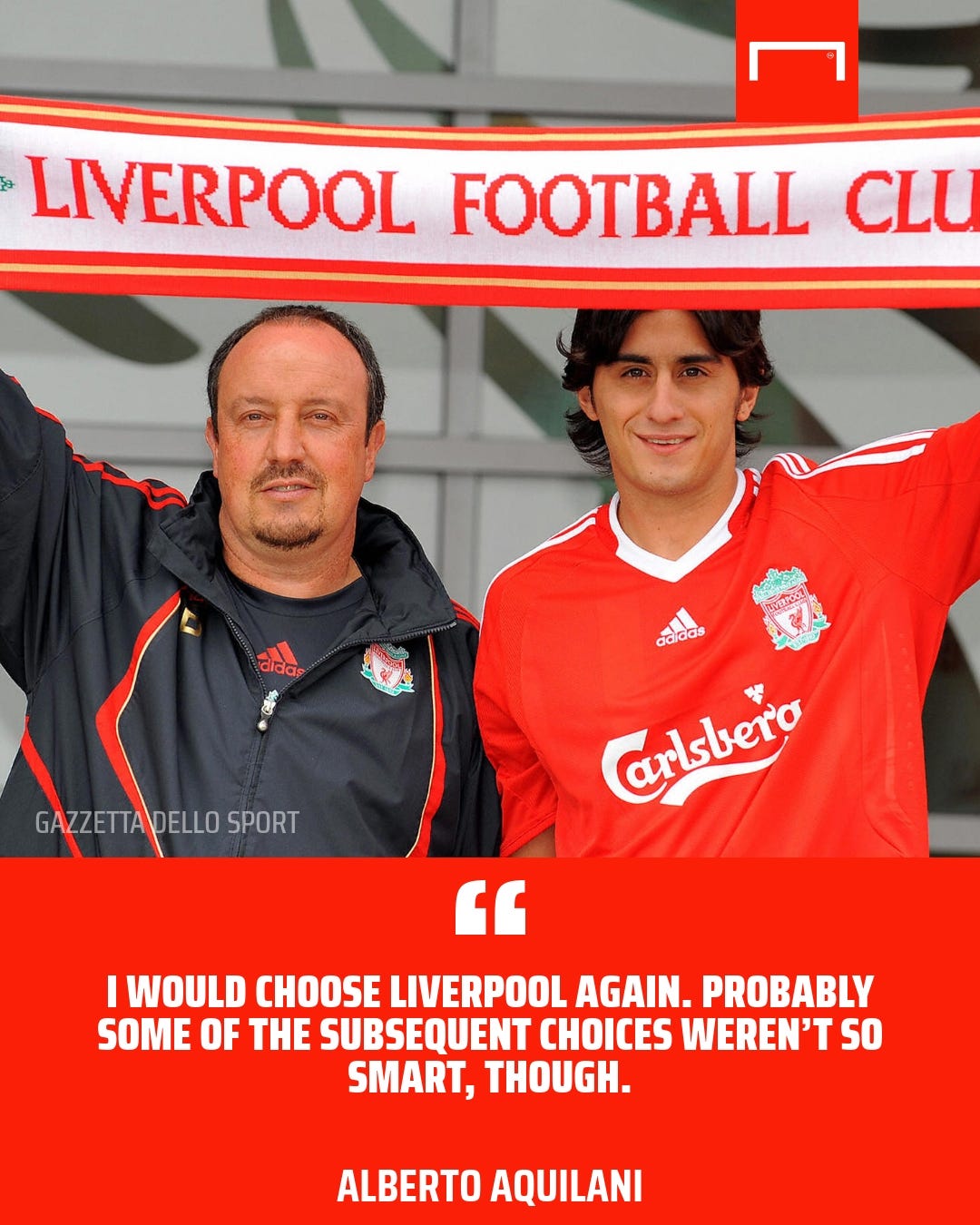 Aquilani joined Juventus on loan, but despite becoming a regular first-team player, the Bianconeri declined to make the transfer permanent.

They had a May 15 deadline to sign him for €16m (£13.9m), but Juve wanted to haggle. Time dripped away and Aquilani was allowed to leave Turin.

General director Giuseppe Marotta told TuttoSport: "[We let the deadline pass] not because we hold Aquilani in less esteem but because we considered the cost exorbitant, unreasonable given our goals.”

Hodgson was sacked during the 2010-11 season, and his replacement Kenny Dalglish said Aquilani could have a future at Anfield, but the Scot ultimately decided the Italian did not fit into his preferred formation.

A season at Milan followed, before Aquilani was released on a free to join Fiorentina. He spent three years at the Artemio Franchi before taking in spells at Sporting CP, Pescara, Sassuolo and Las Palmas.

While his hopes of establishing himself as one of the game's elite midfielders arguably never really recovered from his underwhelming stay at Liverpool, where he played a grand total of 813 league minutes, starting nine Premier League games, Aquilani stated in an interview with the Gazzetta dello Sport in 2016 that he had no regrets over moving to Merseyside.

The problem, as far as he was concerned, was the moves he made after Anfield.

“I would choose Liverpool again," Aquilani revealed. "Probably some of the subsequent choices weren’t so smart, though. For example, I went on loan to Juventus, but their buying option was too high.

"If it was lower perhaps, I would have stayed in that fantastic group, who knows. Some of my team-mates that season performed worse than me but stayed.”

Aquilani is now youth-team manager at Fiorentina, no doubt counselling his youngsters not to make any rash transfers – and make sure they are joining a club who will use them properly.