The reasons why a player may struggle to live up to 'wonderkid' status are many. Poor attitude, injuries, a poor relationship with a manager, the wrong move at the wrong time, the pressures of expectation – the list goes on.

Kelechi Nwakali perhaps ticks some of those boxes but the main reason the Nigerian midfielder has yet to live up to the hype is a word which strikes fear into any heart – paperwork.

Nwakali signed for Arsenal as a teenager in 2016, having played a starring role in Nigeria's triumph at the Under-17 World Cup in Chile the year before.

Nigeria were the undoubted stars of the competition, scoring 23 goals in seven matches, including a 5-1 group stage mauling of hosts Chile, thumping Australia 6-0 in the round of 16, beating Brazil 3-0 in the last eight, overcoming Mexico 4-2 in the semis before defeating Mali 2-0 in an all-Africa final.

The team had two main stars: Victor Osimhen, who won the Golden Boot with a mammoth 10 goals; and Nwakali, the midfield dynamo who picked up the Golden Ball for best player.

The trophy has been won by several players who went on to be major stars, including Landon Donovan, Cesc Fabregas and Toni Kroos.

However, whereas Osimhen was one of the most in-demand strikers in world football last summer, making a big-money move to Napoli having impressed at Lille, Nwakali has rather fallen off the world football radar.

Indeed, the 22-year-old is now on loan at Spanish second division side Alcorcon from La Liga club Huesca. 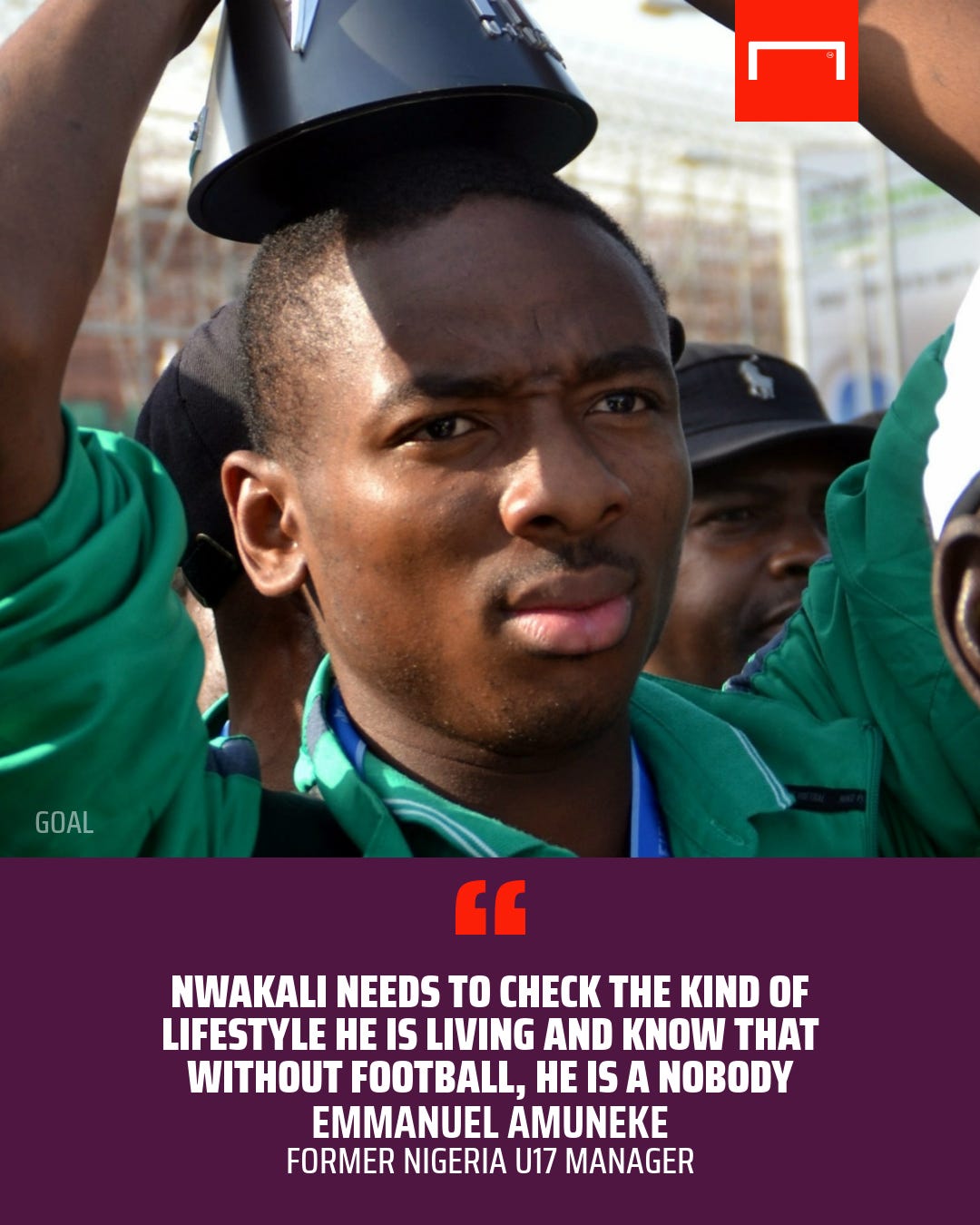 He had joined Arsenal from the Diamond Football Academy in Nigeria but work permit issues prevented him from ever playing in the Premier League, and he instead had to spend time on loan in the Netherlands with MVV Maastricht and VVV-Venlo.

Having arrived in England from outside Europe without any experience at senior international level, Nwakali was left in limbo because of paperwork problems, yet he says he was targeted by some fans, who mistakenly saw his lack of playing time as him wasting his talent.

His own U17 manager, ex-Nigeria international Emmanuel Amuneke, seemed to echo these claims over Nwakali’s attitude, telling Goal in April 2020: “There is nothing to doubt about Nwakali’s talent.

"All he needs to do is counsel himself and realise that when you forget the root that took you to success, you start to lose the beauty of what made you who you are.

“A lot of Nigerians are expecting his progression, but it is unfortunate because of what he has passed through over the years. He also needs to check the kind of lifestyle he is living and know that without football, he is a nobody.”

Nwakali has rejected these personal attacks, arguing that there was nothing could do about his inability to break through at Arsenal as a youngster.

"It was difficult mentally not playing for a year, so going through all of that and coming on the internet to see someone say I am gallivanting, was hurtful," he told the BBC in September 2020. "A lot of Nigerian fans had the impression that I am just sitting doing nothing."

A loan to Porto in 2018-19 was supposed to be his chance to move into the European limelight, but he never played in the Portuguese side’s first team, making just 16 appearances for Porto B.

Things got even worse in March 2019, when he was marooned in Nigeria due to yet more visa problems. 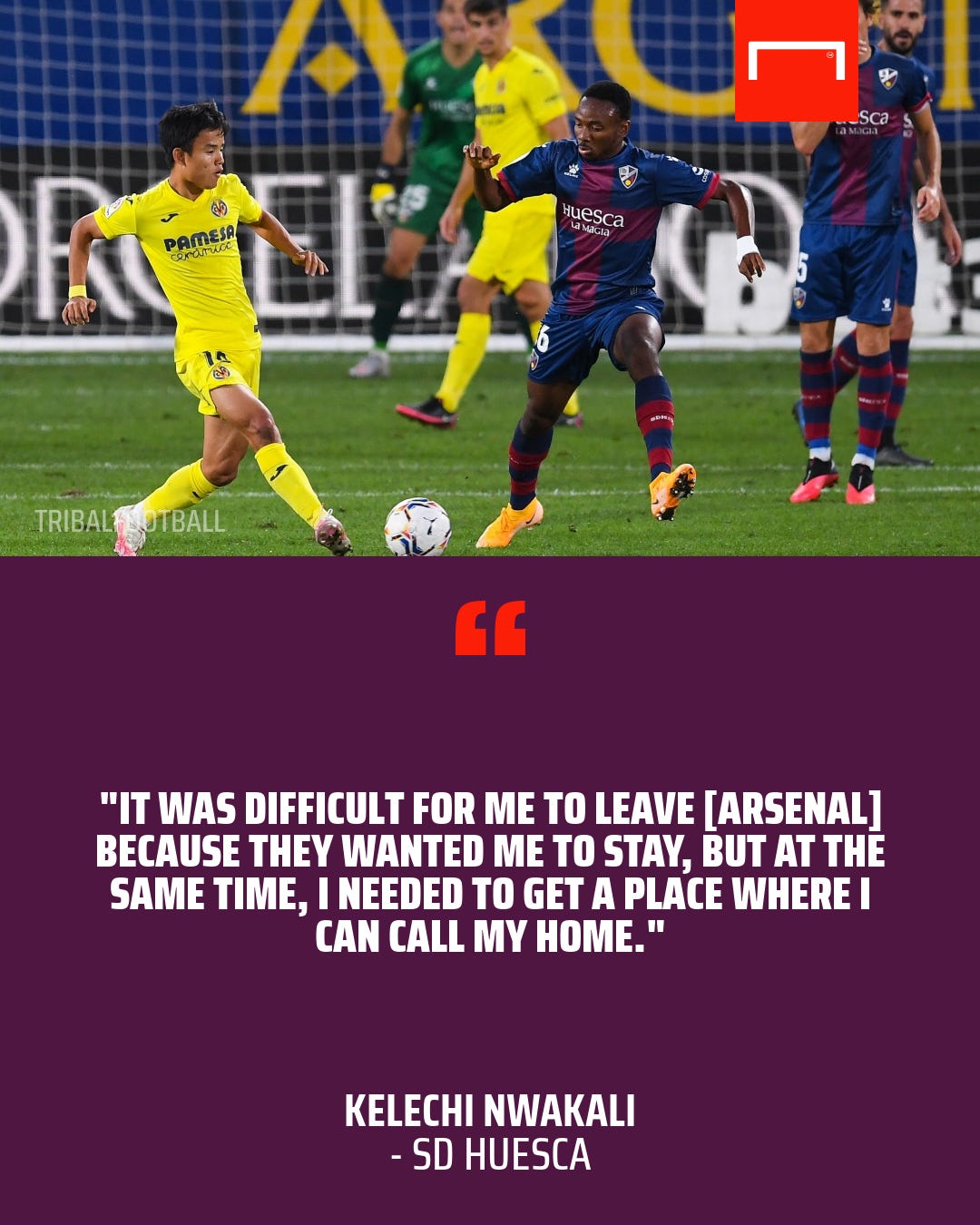 Manager Gernot Rohr had called up the player to face Seychelles in a 2019 Africa Cup of Nations qualifier. Nwakali didn’t play, and soon found himself at the mercy of administration once again.

"I didn't have a Portuguese resident card, it wasn't ready before I left, but I had to come to that game because that was my first official call-up for the Super Eagles. I was stuck in Nigeria for three months," he told the BBC .

"It was difficult getting a visa back to Portugal, I couldn't get back to my club for three months and by the end of the season no one wanted to take me, they said I hadn't been playing.

"I learned a lesson that it is important you do well at your club side first, the national team is important, but some important decisions need to be made, that will help my career in the future and I didn't make the right one in the right moment."

Arsenal eventually seemed to decide Nwakali’s issues were more trouble than they were worth and, in September 2019, he was allowed to leave.

The player himself seemed to bear no ill will, writing on Instagram: "I have gained a lot from my time here and everybody involved with the club have been great to me.

"I just want to say a big thank you and goodbye, because it is time to move on, time for another chapter and another challenge."

He admitted in an interview with TribalFootball last year that it was a wrench to leave Arsenal, but that the need to establish himself and set down roots as a first-team player were more important.

"It was difficult for me to leave because they wanted me to stay," Nwakali said. "But at the same time, I needed to get a place where I can call my home, where I can continue to develop my game."

Nwakali is taking small steps to that goal now.

Settled in Spain with a three-year Huesca contract and the prospect of regular football for the rest of the campaign at Alcorcon, Nigerians will now hope that one of their most promising players of recent years can finally start to come good.