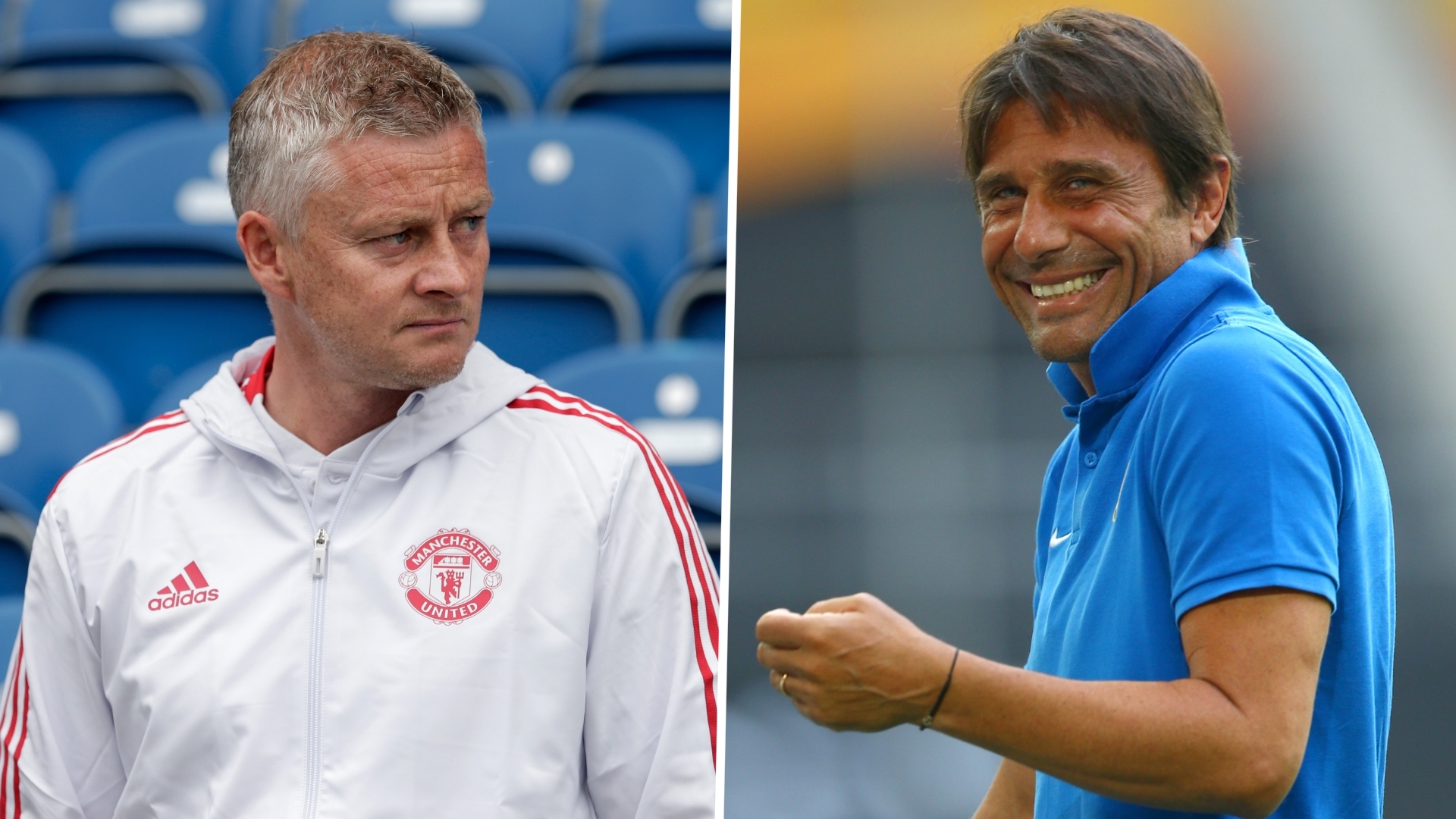 The Italian is a proven winner and interested in taking over at Old Trafford, but the club's owners are reportedly reluctant to give him the job

Manchester United have become the subject of a million memes and viral videos after their embarrassing 5-0 loss at home to Liverpool last weekend.

For once, though, the funniest thing about their tragicomic display at Old Trafford was not David Squires' now almost weekly satirical take on the gradual demise of a once great sporting institution (although it was typically brilliant).

It was instead the news that the club's reluctance to sack Ole Gunnar Solskjaer and replace him with Antonio Conte is rooted in the belief among certain members of the board that hiring the Italian would go against the 'cultural reset' that Ed Woodward, with the support of the Glazer family, has overseen since Jose Mourinho's acrimonious exit in 2018.

The idea seems to be that the 'United Way' is somehow better than Conte's.

United, though, have not lifted a league title since Sir Alex Ferguson was replaced as manager by David Moyes in the summer of 2013; Conte has won three, including one in England.

And besides, what exactly does the 'United Way' mean to the people currently calling the shots at Old Trafford? Is it having Solskjaer on the bench, Ryan Giggs in the VIP box and Cristiano Ronaldo up front?

What exactly has the 'United Way' done for the club over the past three years?

Nostalgia may have felt like a breath of fresh air given the atmosphere left behind by Mourinho, but a once forward-thinking club now looks mired in the past. They do not hand out trophies to tribute acts, after all, especially ones as tired and cliched as Solskjaer's 'Spirit of 99' routine.

United home games have become the hottest ticket in town in recent months,  yet attendees are being treated to a farce, as the sight of Luke Shaw and Harry Maguire colliding with one another last weekend underlined.

Remember, since Solskjaer took charge, just over £460 million ($630m) has been spent on 14 new players. United, though, are no closer to ending their title drought.

However, there remains a seemingly commonly held dual-belief in the Old Trafford board room that the Norwegian might still be the right man for the job simply because he retains the support of Ferguson, while Conte is merely Mourinho Mark II.

This is a simplistic and damaging narrative, as far as United's future prospects are concerned.

Solskjaer's tactical failings are well-documented, given they have been long been clear and obvious.

Even his staunchest supporters – and he has many former team-mates in the British press unwilling to admit his failings – are now conceding that he needs to inspire a rapid improvement in United's form if he is to hold on to his job.

However, one of their main arguments against making a managerial change at this juncture is that Conte, Solskjaer's obvious replacement, is "not a fit for United", as Gary Neville put it on Sky Sports last week.

It is alleged that Conte would simply end up creating as many problems as Mourinho. This comparison, though, is utterly ridiculous.

Yes, Mourinho clashed with the United directors over transfer strategy shortly before his departure – and Conte has a history of falling out with his bosses over player recruitment.

However, it is a complete myth that he has repeatedly left a club in tatters. On the contrary, Conte has consistently left his successors an incredibly solid foundation after overseeing remarkable rebuilding jobs.

He inherited a Juventus team coming off back-to-back seventh-placed finishes in Serie A and led them to three successive titles. He won a Premier League title at the end of his first year in England with a Chelsea team had had finished 10th the season before.

In this second season at Inter, he ended an era of unprecedented success at Juventus – nine consecutive Scudetti – that he himself had started. The Nerazzurri had not won a Serie A title since 2010 and, before his arrival, they were a club lacking direction and discipline. He provided both.

This is what Conte does; what he has always done.

Is it always a seamless transition? No, never. Because he often enters clubs saddled with problem players and he does not suffer fools gladly.

As Andrea Pirlo wrote in his autobiography, a Conte dressing room is not for the faint of heart: "His words assault you... As we Italians say, he has a devil for every hair. And if the hair is fake, the devil is very real!"

Conte, though, has never hidden the fact that he demands a lot of his players. "I'm a hammer," he once told Gazzetta dello Sport. "I admit it." He does not accept anything less than 100 per cent commitment to the cause; his cause.

On the first day of pre-season training after he had taken over at Juventus in 2011, he summoned the squad to the gym to introduce himself and told them: "It's time to stop being crap.

"The last few seasons here have hurt everyone, so, we have to do something to rediscover ourselves, to get back to being Juve. Changing direction is not a polite request, it's an order, a moral obligation.

"You must take only one step, which is relatively simple: follow me."

"Conte has a crazy mentality," former Juventus striker Fernando Llorente previously explained to the Gazzetta. "He gets inside your head."

Of course, part of the players' willingness to do as Conte says is rooted in the fact that he does not ask anything of others that he is not willing to offer himself.

He does not just impose a strict dietary plan upon his players; he follows one himself. He also works as hard off the field as he demands they do on it.

His approach is meticulous, his research exhaustive. "He puts his heart and soul into it," Inter wing-back Matteo Darmian said last season.

And that's precisely why his "foot soldiers", as Conte sometimes calls his players, are willing "to die" for him. Or, at the very least, turn up for training on their days off.

There are those that do not find his aggressive approach agreeable, of course. At Chelsea, he famously clashed with Diego Costa and David Luiz.

Some players – and some directors – clearly find his intensity too much to take. We are talking here about a man who has even offered his players sex tips.

"Short spells, with the minimum of effort and use positions where they are under their partners,” he explained to L'Equipe.  "And preferably with their wives, because then you don't have to put in an exceptional performance!"

Of course, even Conte's sense of humour would not go over well with some, but he takes his role deadly seriously.

Shortly after he took over at Inter in May 2019, the club changed their motto to 'not for everyone' – and they may as well have been talking about their new coach.

Some of the fans did not even want him there because of his time at Juventus, as a player and then a coach, but he won them over with the passion he instilled his players; that win at all costs mentality that he had honed in Turin.

Many supporters had long cherished their 'Crazy Inter' history, that propensity for self-destruction, and when they stopped playing 'Amala Pazza Inter' before matches, some fans blamed Conte.

It was not his call at all, but he cared little for that part of Inter's history. He was not there to win a popularity contest by tapping into the past; he was there to build a brighter future for the club.

"Enough craziness," he declared at his first press conference. "It will be a regular and strong Inter."

He would make the same promise were he asked to take over at United because he retains the utmost belief in himself and his methods.

🗣 "The heights I have reached as a player are thanks to him.

And why wouldn't he? He has proven track record for improving players and restoring clubs to their former glory. He even took Italy to the quarter-finals of Euro 2016 with one of the weakest squads in the nation's history.

Surely, United are in dire need of a disciplinarian, a masterful man-manager heralded for the part he played in ushering in a new era of tactical sophistication in the Premier League.

“He teaches football,” according to Inter defender Alessandro Bastoni. “He’s the Lionel Messi of coaches.”

Then again, maybe Neville is right. Maybe he is not a good fit for United. The man is a professional and a perfectionist.

He would not settle for the current level of underperformance in Manchester. He would demand changes. He would not quietly accept orders; he would question decisions. He certainly would have publicly asked why United signed a 36-year-old striker incapable of pressing when they needed a defensive midfielder.

During one of his transfer-related meltdowns at Inter, he said he wanted to see one of the directors come out and explain how the club had got so many things wrong during the off-season.

Such an outburst would be abhorred at United. At a club where the lack of expertise goes much higher than Solskjaer, a character like Conte would be impossible for the directors to control.

United are so fortunate that one of the best five coaches in the world is available at a time when they need an elite tactician capable of giving them the kind of cultural rest they so sorely need, and yet they are dithering over offering him a job?

It's ludicrous. Then again, overlooking Conte would just be the latest in a long line of farcical decisions made at Old Trafford in recent years.