The Argentine's Barcelona exit has stunned the football world and Paris Saint-Germain are now in possession of a truly awesome attacking unit...

Marco Verratti has never hidden his excitement at the idea of playing in the same side as Lionel Messi.

As recently as February, when the full extent of Barcelona's financial crisis was starting to become clear, the Paris Saint-Germain midfielder was asked by Canal Plus about the prospect of the Argentina attacker swapping Camp Nou for the Parc des Princes.

“To have him in the squad would be something magnificent," Verratti gushed. “I would give the ball to Neymar and Messi and stay behind to just enjoy watching them a bit."

That dream is now set to become a reality, with PSG having confirmed the signing of the Argentina captain on a free transfer on Tuesday evening.

It is, of course, impossible not to ask how the Parisiens have pulled this off?

In the same summer that they have signed Achraf Hakimi from Inter for an initial €60 million (£51m/$70m), and handed out massive contracts to the most in-demand free agents on the market – Sergio Ramos, Gigio Donnarumma and Gini Wijnaldum – PSG have now given Messi a net salary of €35m (£30m/$41m) a season.

This is made all the more extraordinary for two reasons: they already have the two most expensive players in history, Neymar and Kylian Mbappe, on their wage bill; and the world remains gripped by the devastating economic effects of a pandemic.

Football fans already disgusted by a lack of competition in Europe's elite leagues, the recent concentration of talent at clubs funded by oil money, and the Super League threat to the very existence of innumerable clubs across the continent, are understandably wondering where 'Financial Fair Play' is in all of this.

PSG president Nasser Al-Khelaifi insists everything has been done by the book, but their summer spending spree surely shows that if UEFA's flawed but essential bid to control spending was not dead before, it is now.

Still, there is absolutely no denying that many football fans will be able to put all of these grave and legitimate concerns to one side and look forward to the prospect of Messi teaming up with Neymar and Mbappe.

Such is the nature of the modern football follower. 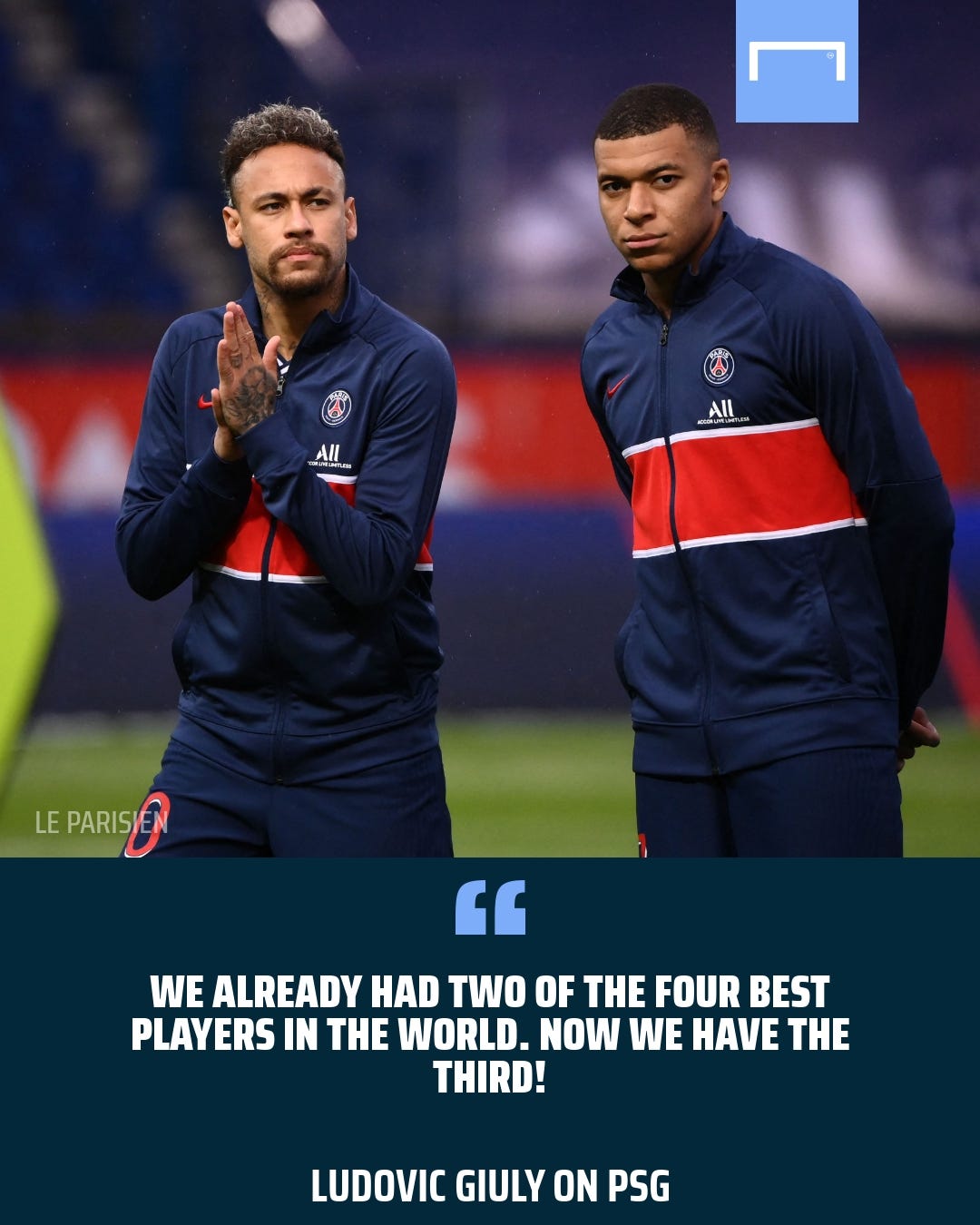 As former PSG winger Ludovic Giuly enthused in Le Parisien, "We already had two of the four best players in the world. Now we have the third!

"Do you realise that Neymar, Messi and Mbappe will play together in Ligue 1? It sounds mind-boggling!"

And it is: PSG are now in a position to field what could prove the greatest attacking trio in football history.

Neymar's outrageous trickery and Mbappe's searing pace are now set to be complemented by Messi's otherworldly genius – their potential is frightening.

Indeed, we could be about to see a repeat of what Messi and Neymar achieved alongside Luis Suarez in Barcelona's famed 'MSN' attack: a spectacular Champions League triumph in the South Americans' first season together.

Not that having such a talented forward line is a guarantee of success, of course.

As Gerard Pique admitted, Barca were made "to suffer" in the 2015 Champions League final win over Juventus, and that was with some of the finest midfielders of all time within their ranks.

However, the defender tellingly added, "It's easier with three players up front with such quality and who are so fast. You give them the ball and they just create goal opportunities."

Messi is no longer quite so fast, of course. At 34, he is clearly slowing down. But as well as scoring more goals than any other player in La Liga last season (30), he also completed the most dribbles (159) and created the most chances (77).

He remains a phenomenon, as he proved again during the off-season by leading Argentina to Copa America glory, and the target now, as he openly admitted in Wednesday's press unveiling, is a fifth Champions League crown. 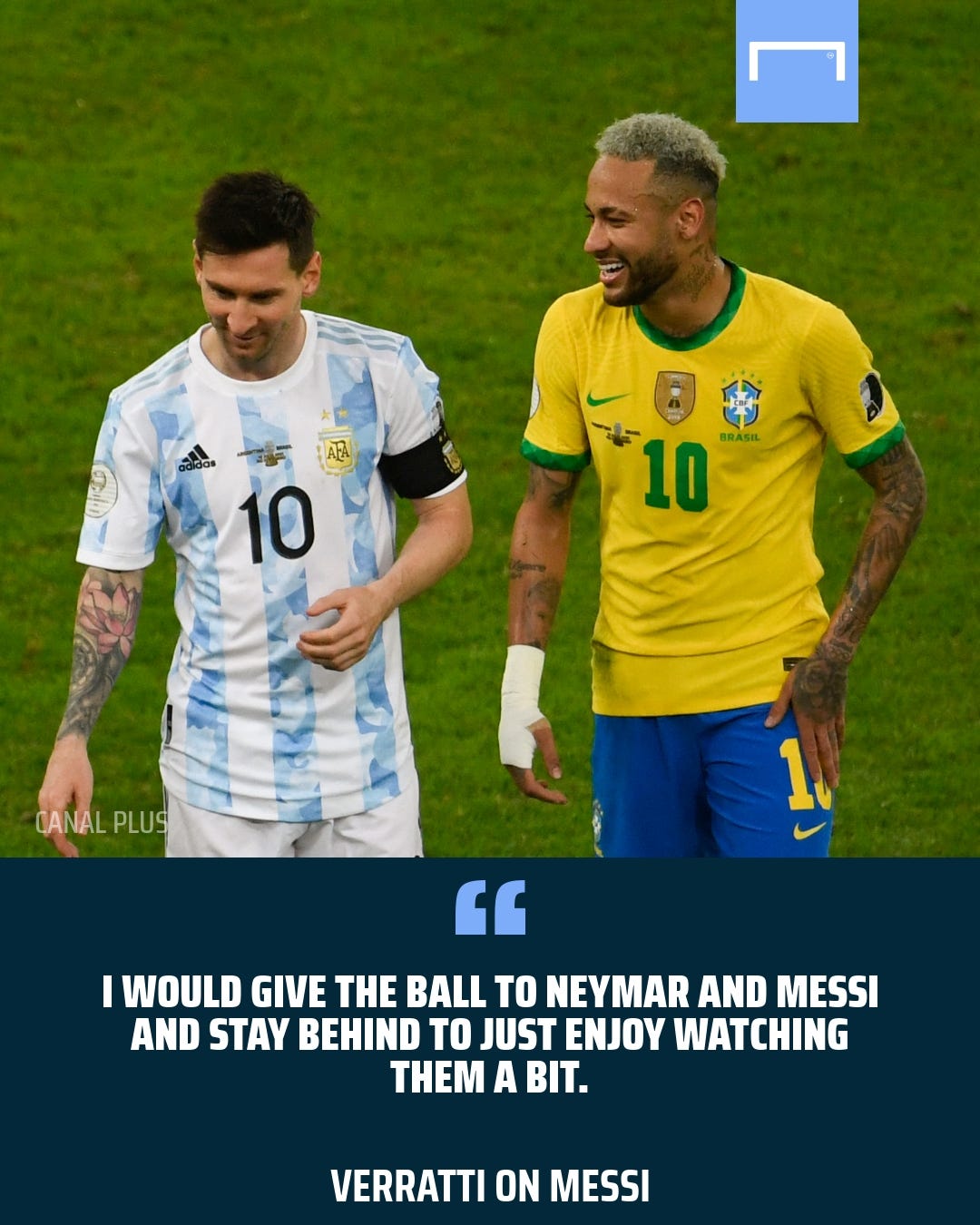 PSG were clearly only one of a select few clubs capable of meeting Messi's exorbitant wage demands, but they also offered him his best shot at more European glory. And that will be the minimum expected of the newly christened 'MNM' forward line this season.

It is also imperative if they are to be compared to the game's great trios.

And yet, for some Blancos supporters, the club's greatest attacking triumvirate remains Alfredo Di Stefano, Ferenc Puskas and Paco Gento – who claimed five consecutive European Cups in a row between 1956 and 1960.

Of course, such sustained success already appears beyond Messi, Neymar and Mbappe.

Because of the Argentine's age, and the Frenchman's expiring contract, it is highly doubtful that we will eventually see a statue in the mould of George Best, Dennis Law and Bobby Charlton erected outside the Parc des Princes in honour of 'MNM'.

We may be about to bear witness to the most expensively assembled attack in football history, but it's certainly not been built to last. It could well be broken up inside a year.

Still, while the 'MNM' era might be short-lived, it should prove spectacular.

No matter where one stands on the PSG project, just like Verratti, we are all highly likely to enjoy watching them play, even if it is just for a bit...