This time last week, the Bianconeri president was one of the most important men in football - now he is among its most hated

On Tuesday night in Rome, a new mural appeared on a wall on Via Caccini, close to the headquarters of the Italian football federation (FIGC).

It depicts a stone-faced Andrea Agnelli puncturing a football with a golden dagger.

Street artist Laika has christened the piece 'Il Golpe Fallito' ('The Failed Coup'), in reference to the doomed European Super League (ESL), which collapsed almost as rapidly as it had been founded.

After decades of posturing and threats by Europe's elite clubs, talk of a breakaway tournament had resurfaced on Saturday afternoon.

UEFA had just finalised plans for a revamped Champions League but the governing body's president, Aleksandar Ceferin, received calls from five of the 12 founders of the ESL to confirm that the rumours were true.

The stunned Slovenian eventually managed to get in touch with the European Club Association (ECA) chairman Agnelli, who assured him that the whole thing was "bullsh*t".

"Don't worry," the Italian said, "nothing is going on."

According to Ceferin, after the pair had exchanged several calls and agreed to issue a joint-statement on the matter, Agnelli promised to ring him back in an hour. But he didn't. Instead, he turned off his phone.

Within 24 hours, Agnelli had quit the ECA and resigned from his role on the UEFA Executive Committee, and had been confirmed as the vice-president of the new ESL.

Just two days after agreeing to UEFA's proposed changes to the Champions League, Agnelli had turned his back on them... and his friend.

Ceferin called Manchester United's Ed Woodward, AC Milan's Ivan Gazidis and Real Madrid's Pedro Lopes "snakes" but it was Agnelli he labelled "the most disappointing" figure in the attempted breakaway. After all, he was godfather to the Juventus president's youngest child.

"I don't want to be too personal but the fact is that I have never seen a person that would lie so many times and as persistently as he did," Ceferin told reporters on Monday. "It was unbelievable."

When asked by 24ur on Thursday if he had been naive to trust Agnelli, Ceferin replied, "Better to be naive than a liar." 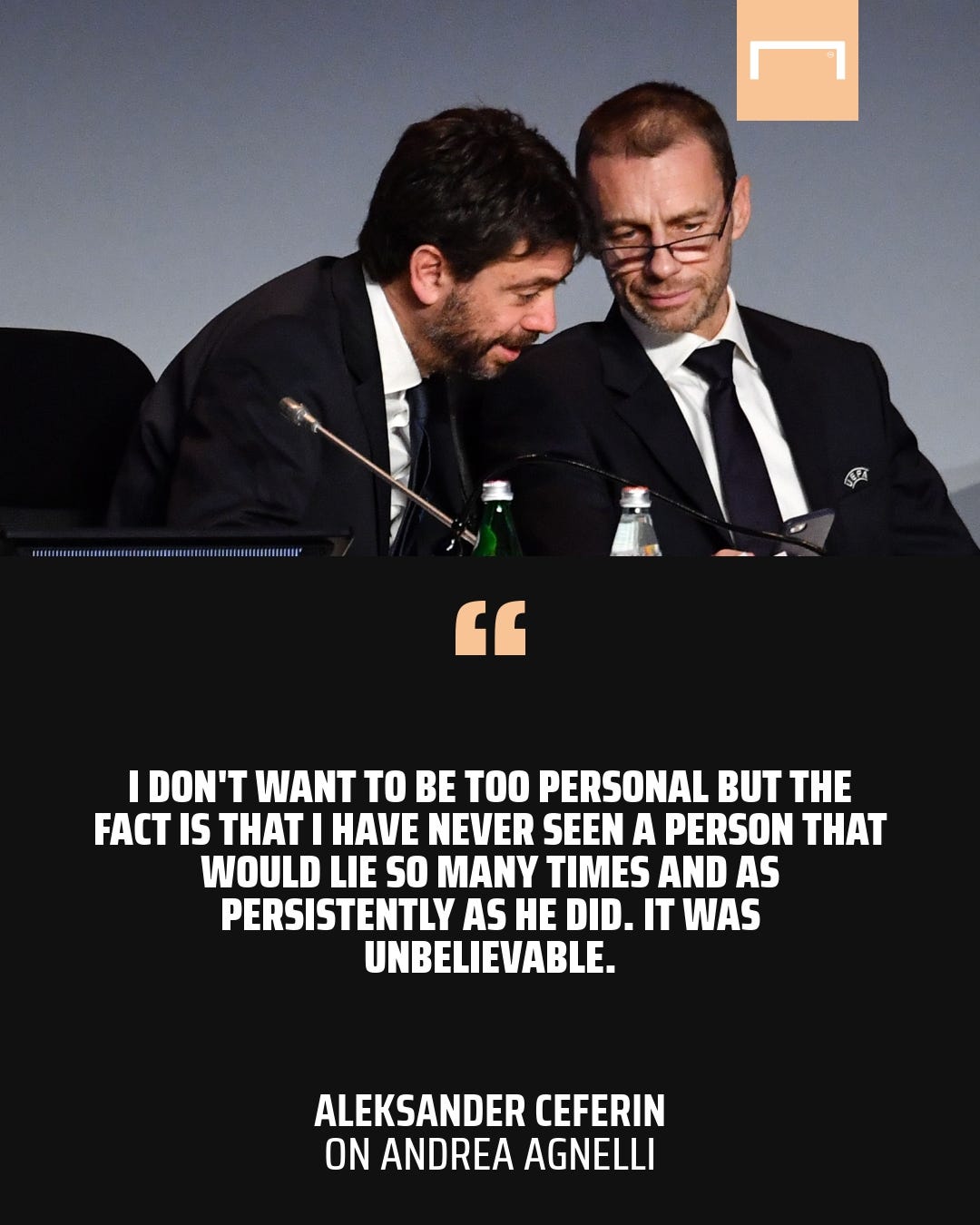 Ceferin wasn't the only one left outraged by Agnelli's perceived betrayal.

In Italy, there was also disgust at how the Bianconeri supremo, in conjunction with Milan CEO Gazidis and Inter counterpart Beppe Marotta, had allegedly "sabotaged" Serie A.

As Torino president Urbano Cairo revealed, Agnelli had been part of the internal committee charged with overseeing the sale of TV rights and a 10 per cent stake in the media company set up by the league to a private investor for approximately €1.7 billion (£1.5bn/$2bn).

"Therefore, he had a very important role in the talks," Cairo explained to reporters. “The committee of five, which was created on October 13, 2020, had been delegated to control the talks on behalf of all of the other clubs.

“Suddenly, though, there was a U-turn. Despite the vote from the assembly to support the idea, Agnelli and the Inter owners suddenly distanced themselves from it. Now, we know why.

“We now come to discover that there were these negotiations between 12 European clubs, all of them heavily in debt, with secret meetings between Agnelli and (Real Madrid president) Florentino Perez.

“This is unfair competition, this is lying, this is bad faith. You are delegated by the Serie A clubs to negotiate on their behalf and meanwhile are negotiating on another front to work out your own financial problems by damaging the clubs who gave you the mandate?"

Consequently, Agnelli received a frosty reception when he appeared at an emergency league meeting on Monday to discuss Juve, Inter and Milan joining the Super League.

The three 'rebels', as they were dubbed by the Italian press, insisted that they wished to remain in Serie A.

However, according to La Repubblica, when it was pointed out that Juve, Inter and Milan would have such an incredible financial advantage over their rivals that no other team would have a chance of winning the Scudetto, Agnelli reportedly replied, "Maybe I'm wrong, but hasn't that been the case for the past 80 years?"

The other club presidents were stunned by his response but Sampdoria president Massimo Ferrero sarcastically called Agnelli a "genius" and told him he deserved a round of applause. 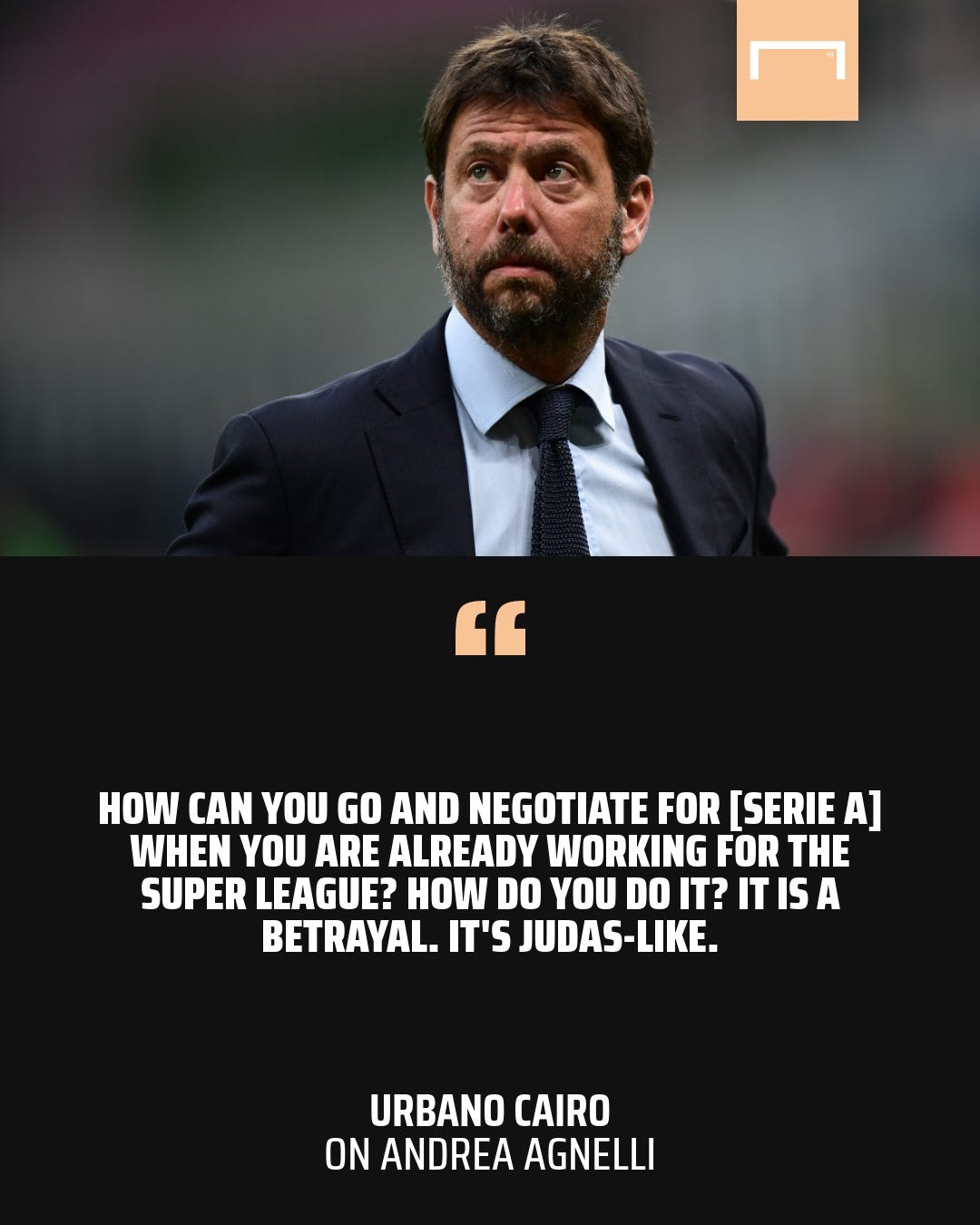 Cairo was furious: "How can you come here to talk about solidarity when you sabotaged the negotiation with the funds, already knowing that you were doing the Super League?"

He still hadn't come to terms with Agnelli's apparent duplicity when he spoke to the press afterwards. "How does one do something like that?" he asked in disbelief. "It is a betrayal. It's Judas-like."

Ferrero, meanwhile, was struggling to contain his emotions. "Football would not exist without the fans," he told Radio Marte. "We must take football back. If we follow people on a power trip, we do not go anywhere. How dare they?”

"I've always voted against Agnelli, I’ve never followed him. What did he do in such a delicate moment [for football]? I have no words for him. If I say what I think, they will censor the show."

Ferrero was also among those to call for sanctions. Former Italy international Antonio Cassano even went as far to argue that Juve, Inter and Milan should be thrown out of Serie A.

There is unlikely to be any action taken, though. Lega Serie A is not in a position to expel the Italian members of what Ceferin has labelled "The Dirty Dozen".

They would have needed the support of the FIGC and/or UEFA to pull off such a move. However, neither body has, thus far, demonstrated an appetite to punish any of the Super League's founders.

Ceferin has already welcomed the English clubs back into the UEFA family, after they pulled out of the ESL one by one on Tuesday night, and he now wants to push ahead with the Champions League revamp he unveiled the day before.

FIGC president Gabriele Gravina, meanwhile, acknowledged that while the whole affair underlined "something is not working" within football, "no forms of trials or sentences are planned. An idea that has not materialised cannot be sanctioned."

So, the Italian clubs at the centre of this affair are set to escape punishment. Agnelli, though, is set to suffer. His reputation as a visionary leader and brilliant businessman has been irreparably damaged.

He was the public face of the Super League enterprise and, along with Perez, one of the key protagonists behind the scenes. He has, therefore, been utterly humiliated by its collapse inside 48 hours. His very competency is now being questioned. 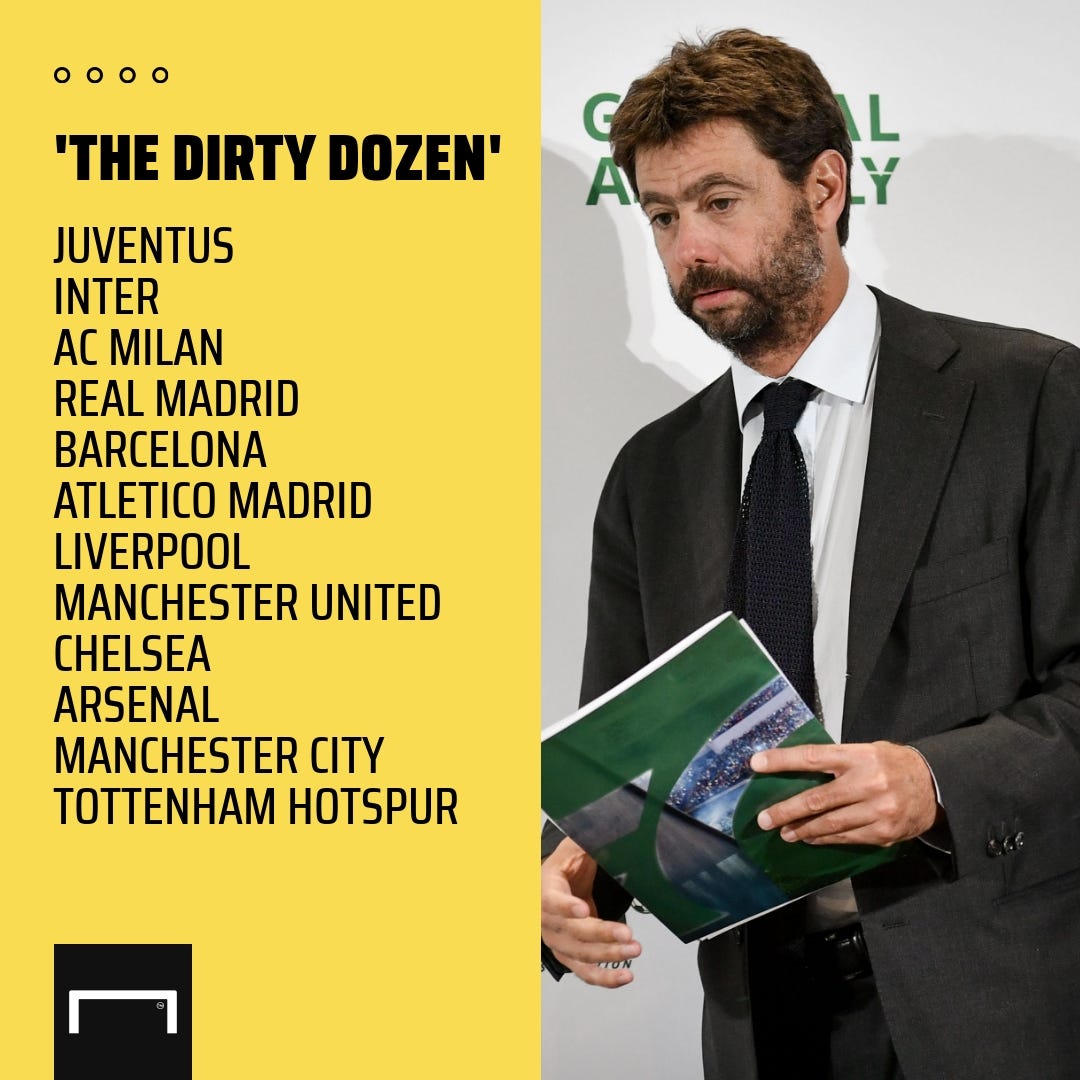 Agnelli hasn't just lost face, though, he's lost friends. Powerful ones. He has gone from one of the most influential figures in football, to arguably its most ostracised.

Just this time last week, he was running an organisation which represents 246 clubs across Europe – and enjoyed an excellent relationship with Ceferin. Now, he is persona non grata in both the ECA and UEFA.

According to the Corriere dello Sport, Ceferin has spoken to the presidents and chairmen of every founding member of the ESL since Tuesday – bar Agnelli, while former ECA chairman Karl-Heinz Rummenigge says he presently doesn't feel compelled to call his successor.

Agnelli has more pressing concerns, though, given he is facing calls to resign as Juventus president. That is hugely significant in itself. Firstly, the Agnelli family have owned the club since 1923. Secondly, he is responsible for rebuilding a Juventus left devastated by the fallout from Calciopoli.

Since being elected president in 2010, Agnelli has masterminded a quite stunning rebirth. He took a club that had been relegated just four years earlier and transformed it into the most dominant domestic force Italian football had ever seen, winning nine consecutive Scudetti between 2012 and 2020.

However, Agnelli's ultimate goal was to turn Juve into a European superpower. He did not believe that possible through Serie A success alone.

After asking Juve's shareholders to approve a €300m (£340m/£260m) capital increase in October, Agnelli stated, "These numbers seem enormous when compared to the Italian reality, but our point of reference is the great European clubs.

"When we look at the main clubs in Germany, England and Spain, we see that their turnover ranges from €489m (£423m/$552m) at Borussia Dortmund to almost a €1bn (£865m/$1.1bn) made this year by Barcelona. These realities must be our benchmark. 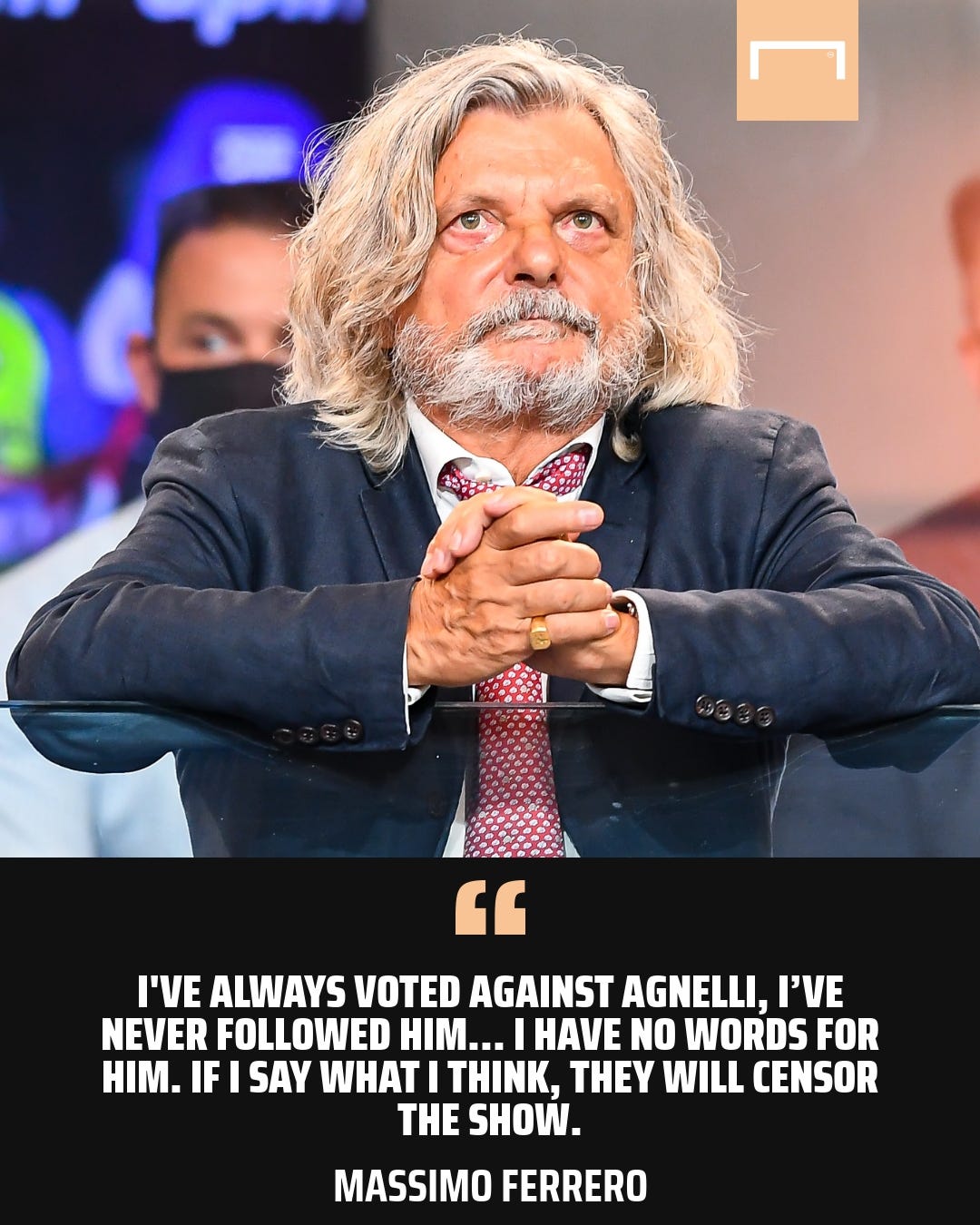 Agnelli felt that the only way to fill that gap was with more European fixtures. But there were no guarantees. He hated the idea that a club could miss out on Champions League qualification because of "one bad season".

He described the Champions League revamp as close to his "dream" model, given it is set to allocate two places to clubs with high UEFA coefficients who have failed to qualify through their domestic leagues.

Agnelli wanted more than a safety net, though – he wanted cast-iron guarantees, so he helped form a Super League that would feature 15 permanent participants.

Of course, that meant breaking away from UEFA, and walking away from Ceferin. It was a massive gamble, and it has backfired spectacularly, and rapidly.

By the time the Corriere dello Sport and La Repubblica were releasing excerpts from an interview with Agnelli late on Tuesday night, in which Agnelli claimed the Super League founders had formed a "blood pact" and the project had a "100 per cent possibility of success", the Premier League participants had already pulled out.

Agnelli's humiliation was complete. He has refused to apologise, though. Tellingly, the statement Juve released on the Super League's collapse didn't even reference the club's fans, some of whom had hung a banner outside their stadium reading, "Our history must not be tarnished, bartered or commercialised. We are Juventus FC. No to the Super League... shame on you!"

Agnelli remains "convinced of the beauty of the project" and he maintains that he has done nothing wrong. He even insists that he went about things in a perfectly acceptable manner.

"If you tell me other methods for putting together such projects... if you were to ask the authorisation of others, I don’t think you would have carried out a project like this," Agnelli told Reuters on Wednesday..

Some important figures at Juve, though, are disgusted with how this has been handled.

As #AgnelliOut was trending on Twitter on Wednesday night, Sportmediaset were claiming that the president is now in a perilous position because he now has "many enemies at many levels" throughout football, with the Gazzetta dello Sport now suggesting that some disgruntled Serie A club owners could even attempt to sue.

Exor CEO John Elkann has reportedly been left thoroughly unimpressed by his cousin's handling of the whole affair and there has been talk of another family member, Alessandro Nasi, replacing Agnelli at the helm.

He remains likely to hold onto the presidency but Agnelli has completely lost his grip on the European game. He's long since turned his phone back on but nobody at UEFA or the ECA wants to talk to him anymore.

His reputation is in ruins. His coup has failed.