'Get in touch with me!' - Yarmolenko pokes fun at Ronaldo by showing off Coca-Cola and Heineken bottles 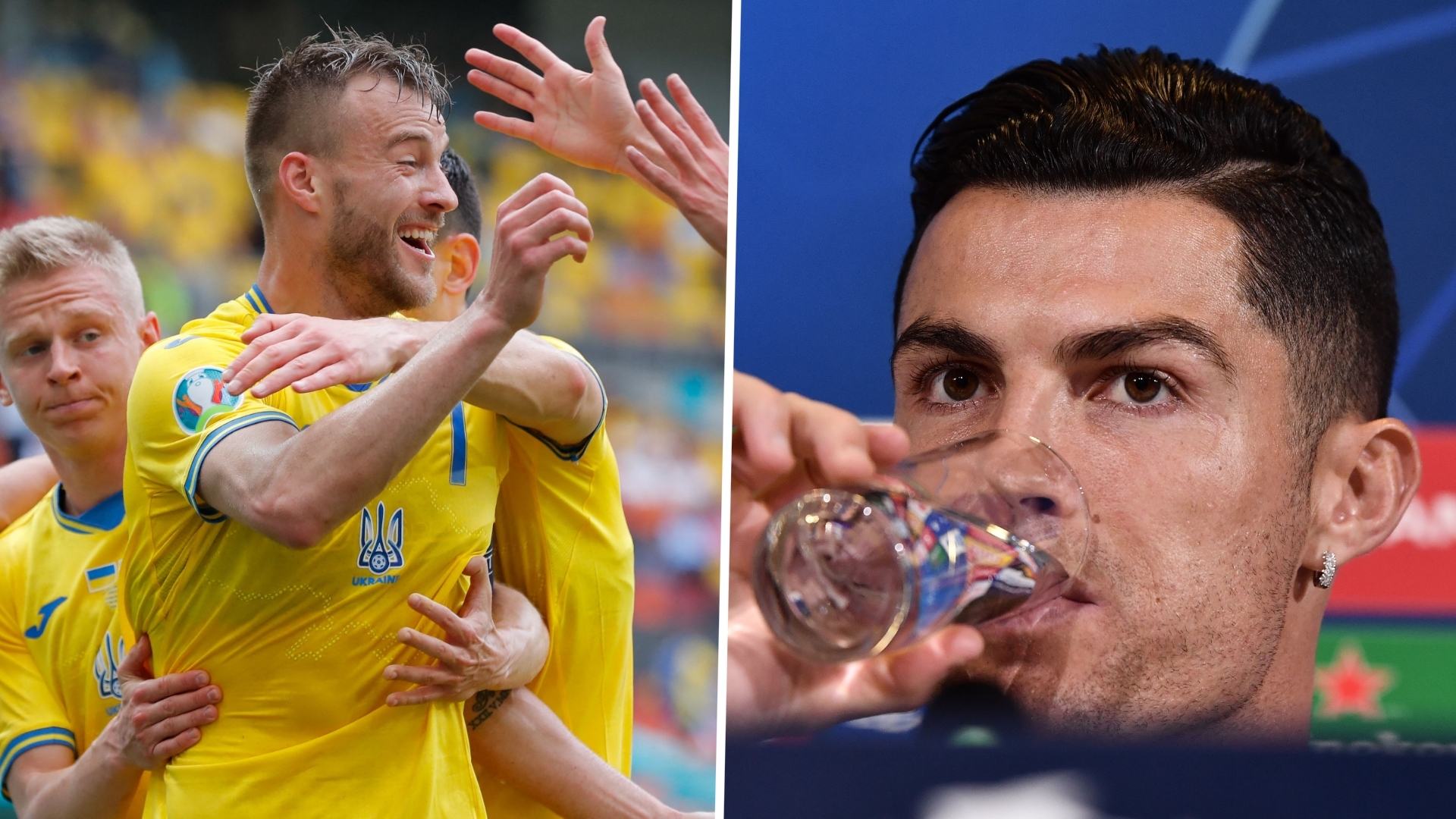 Andriy Yarmolenko has poked fun at Cristiano Ronaldo by showing off both Coca-Cola and Heineken bottles in front of the media.

Portugal captain Ronaldo hit the headlines at Euro 2020 earlier this week when he moved two bottles of Coke out of a camera shot during a press conference.

Yarmolenko has now appeared to mock the Juventus star in his latest appearance in front of the media, embracing the chance to help advertise the soft drink along with popular lager Heineken after helping Ukraine beat North Macedonia.

The West Ham winger, who recorded a goal and assist in his country's 2-1 victory on Thursday, asked reporters: "Can I do something? I’ve seen Ronaldo putting away Coca-Cola bottles recently.

Ronaldo caused a worldwide stir when he replaced his Coke bottles with water before Portugal's opening Group F victory against Hungary earlier this week.

The 36-year-old held up a bottle of water instead and said 'Agua' - which is Portuguese for water - with Coca-Cola's share price subsequently dropping by a whopping £2.85 billion.

Who has followed Ronaldo's lead?

Italy midfielder Manuel Locatelli took the same stance as Ronaldo as he swapped his Coke bottles for water after coming out to address supporters following his country's 3-0 thrashing of Switzerland.

Belgium star Romelu Lukaku also Yarmolenko's point of view, encouraging Coke to get in touch with Roc Nation, his agents.

Now @RomeluLukaku9 is on that sponsor grind 🤑😅 #EURO2020 | #BEL pic.twitter.com/rMTSotgRsm

France talisman Paul Pogba, a devout Muslim who does not drink alcohol, removed a Heinkenen bottle from his sight, despite the fact it was the brand's non-alcoholic version that the European Championships are being used to promote.

England skipper Harry Kane took a different approach to Ronaldo, Locatelli, Pogba and Yarmolenko when faced with the bottles in his latest press interview.

The Tottenham star, who will line up for the Three Lions against Scotland on Friday, thinks sponsors have every right to showcase their products at the tournament and cannot understand why there has been so much fuss.

"From my point of view the sponsors are entitled to have what they want if they have paid the money to do so," said Kane. "It’s not something I have thought about too much, I am more focussed on tomorrow."